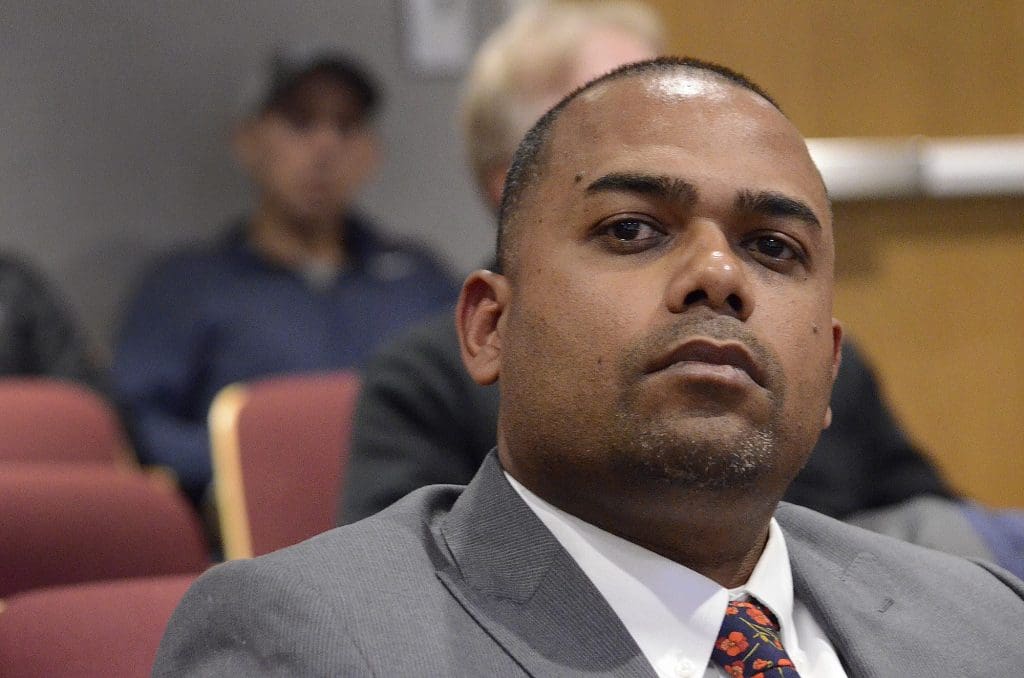 Norwalk Director of Recreation and Parks Nick Roberts, at a 2019 Common Council meeting in City Hall.

NORWALK, Conn. — Nick Roberts is leaving Norwalk, just two years after becoming Director of Recreation and Parks.  He will return to Florida to be closer to his family, a press release said. Mayor Harry Rilling lauded the work Roberts did to “transform the Department with integrity and professionalism.”

But former Norwalk Recreation and Parks Department Director Mike Mocciae said that criticisms of the way things used to be done are “bullshit,” and that cities can’t expect dedication from new employees when they bring them in from the outside and don’t offer pensions.

This isn’t the old days…

Roberts came onboard after the Common Council approved Rilling’s reorganization of City administrative positions. This put Roberts on a rung below the one Mocciae occupied, as Roberts reported to a “Chief” while Mocciae ran a department under the Mayor.

“From day one, Nick hit the ground running and became part of the Norwalk community,” Rilling said in a statement. “My main priority when bringing Nick on was to professionalize the Rec and Parks Department and he accomplished that. This isn’t the old days, and Nick brought the Department into 2021 and is leaving it in a better place than when he found it. I appreciate all he has done for the community in his time here. No doubt, this is a loss for Norwalk, and I wish him the best of luck in Florida.”

“The Recreation and Parks Department became part of the larger Operations and Public Works Department, and Roberts was instrumental in that seamless transition,” the press release stated. “During his tenure, the Department improved protocols and transparency for bidding projects, using fields, and renting facilities…. Additionally, Roberts ushered in a Parks Master Plan which will lead to the Department becoming accredited in the future.”

In September 2019, five months after Roberts was hired, the Common Council authorized $250,000 for a parks master plan which has yet to be completed.

“Nick showed great leadership in pressing to do one and formulating the RFP, the RFP selection process is wrapping up and should be completed before his last day,” Norwalk Chief of Staff Laoise King said Wednesday evening in an email.

The press release said, “The Department continues to expand its tree planting program to implement Mayor Rilling’s vision for a greater tree canopy at City parks. During his time in Norwalk, Roberts was a vocal advocate for improving field conditions, and additional Capital Projects are now underway.”

The press release calls Roberts “a key member” of Rilling’s COVID-19 Task Force, who “led efforts to use City assets, such as Veteran’s Park for COVID-19 testing and Calf Pasture Beach for food distribution events, to meet the needs of the public.”

“During the height of the pandemic, Roberts and his team had to cancel all in-person activities, such as summer camps, and under his guidance, pivoted to provide all-virtual, free programming for various ages,” the release continues. “Roberts and his staff have been working hard to meet Mayor Rilling’s goals of providing a more normal experience for the community this summer. Roberts has lined up camps, interactive activities, and engaging programs that meet strict COVID-19 health and safety guidelines for this summer.”

“When I arrived in Norwalk I was welcomed with open arms by the Mayor, the staff, and residents,” Roberts is quoted as saying. “It’s unfortunate that most of my time here was spent battling the pandemic, but I am incredibly proud of the work we’ve done to accommodate residents of all ages, update our facilities, and improve processes. The pandemic refocused my priorities, and being closer to my mother and aunt is something I look forward to. I am thankful to Mayor Rilling for this opportunity, and despite my short time here, Norwalk will always be a special place for me.”

Nine Recreation and Parks employees took the early retirement incentive last fall.  “The early retirements had little to no impact on parks operations, as those positions were quickly filled,” King said. “Unfortunately for us, Nick saw an opportunity to follow his mother and aunt down to Florida and could not pass it up. We will really miss him.”

Roberts exit comes in the wake of two controversies:

Those controversies are unrelated to Roberts’ exit, King said. “Nick was instrumental in cleaning up a long-mismanaged department, which is exactly what he was hired to do,” she wrote. “It was a big ask, as many very popular programs were held together by handshakes and personal relationships. This was not acceptable to the Mayor, and Nick did an outstanding job professionalizing the department – putting in cash controls, ensuring fair and transparent leasing of city space, and developing policies to standard usage of field and event space.”

Mocciae: ‘You barely have a department left’

Now living in Beaufort, S.C, former director Mocciae was in the Recreation and Parks Department for 33 years, during which time Calf Pasture Beach was substantially upgraded.  He bristled at King’s characterization of his department.

“I had every member of the Board of Estimate behind me on every project, so they can’t say ‘mismanaged,’” he said.   “If that’s what she says, it’s a typical … Democratic/Republican political… statement.”

“The Department was running better than anybody ever ran it,” he said.  (Rilling’s administration) “wanted new blood, new everything” but offered no pensions or anything to encourage an employee to stay. “It’s no commitment to the employee that broke their ass for 30 to 35 years.”

“You get a vicious cycle of people making big money, they don’t care about Norwalk and they leave. It’s just ridiculous. I think that’s the new rule of thinking in municipal governments,” he said. The reorganization puts “a layer above the department heads, they can’t make decisions… and if they wanted to make decisions, they really don’t care. They don’t live here.”

Mocciae lived in Milford, but says he spent 16-17 hour days in Norwalk for more than three decades because he cares about the city.  Roberts didn’t “go to a budget meeting and proclaim that the department needs money,” Mocciae said. “Nothing. They kept taking, taking, taking, taking away. So now you barely have a department left.”

But he added that the passion for outsiders is a mistake being made by municipal governments across the country.  “All municipalities are in for a rude awakening, because of what’s going on, not just Norwalk, it’s all the municipalities.  I’m not saying anything against Harry. I know Harry very, very well.” But when “the city philosophy becomes ‘we want the best and brightest, from outside,’ you bring somebody in from the outside, they don’t know the stories, or they don’t want to work there to understand the job. And the next thing, you know, you have people that overlook deeds, that don’t understand what the city has, what they can and can’t do.”

He says he has historical information, such as deed restrictions on properties, which Roberts never requested. New employees won’t, he said.

Thanks for all you accomplished during your short tenure here – especially in light of the Covid challenges.

Can’t wait to go get by boat sticker in person after filling out paper based forms….if they are even open. ….that would be the real April Fools. City Hall being open.

And it’s April 1st and we still have no idea or indication about any type of summer camp. I guess screw the kids for another summer will be blamed on the way the old department ran.

Harry you are really becoming a joke. The parks and rec was mismanaged? You were the ultimate boss on the chain. Mike brought the beach way up in stature, Taylor Farm, and Cranbury Park is monumental. You brought in an outsider and now he ditches you already! He took over things Mike and gang had in place. There is speculation that your assistant me be next to leave. It wouldn’t surprise us. Can we open city hall please? West Rocks is full but City Hall is closed. Logic? Must be an election year

Thank you Nick for your service. Once again Harry Rilling needs to get his act together and open city hall! Get those bunny slippers off and open back up to the public.

this comment is most important to me, my kids are older, but still…
“… have no idea or indication about any type of summer camp. …”

This is why you hire people from OUR community! This council is a laughing stock! Time to change the guards!

Harry said he brought this guy here to clean up. Now he left his own mess for a better job. He should have stayed cause you don’t have to go to work in city hall. Only in Norwalk.. The guy got a better job in Florida. He is a grown man. He doesn’t need his momma. It’s a 2 hr flight on Jet Blue

Maybe instead of a nation wide search.
The new department head of Parks and recreation should be promoted from within the department! He or She might have an advantage over an outsider, and do a better job.
Oh might be showing my age, that’s the way things were done.

@Tysen. Can you blame the guy? City Hall is rudderless. This guy jumped off a sinking ship while he still could. The damage that has been done to this city the last few years is going to start showing itself at an accelerating pace. Notice how they can’t list one specific example of how he brought things into the year 2021. It’s just platitudes. At least they finally announced summer camps 3 months after normal, I guess waiting just long enough for everyone to make their own plans.

Oh and they’d better have rock solid proof of criminal wrong doing at parks or else prepare for another lawsuit against the city for malicious defamation. Not that Harry cares about his 8 figure legal bill we’ve paid for already.