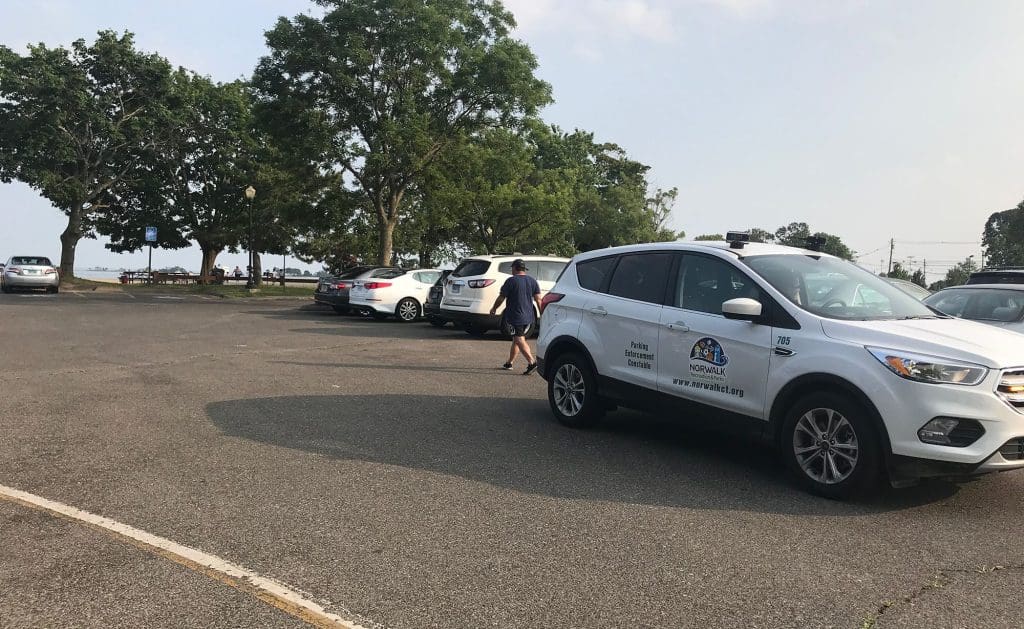 A Norwalk Parking Authority officer patrols Calf Pasture Beach in July. Beach parking revenue is up 31 percent, according to Director of Recreation and Parks Nick Roberts.

“LAZ has developed specialized knowledge of the city over its 10-year relationship with the Parking Authority” said Director of Recreation and Parks Nick Roberts. “Their equipment and software systems are already in place.  Utilizing a sole vendor citywide creates compatibility, compliance, and better customer service for residents who are already familiar with the company’s operations.”

In 2019, which was the first year of the new cashless parking management system, Calf Pasture’s parking revenue totaled $296,062, representing a 31 percent increase over $225,686 in 2018, Roberts said.  By contrast, 2018’s figure showed almost no increase over 2017’s total of $221,015.  Roberts further noted that the automated car count is increasing planning and staffing efficiencies while providing useful data for grant applications.

When Council member John Kydes (D-District C) asked, “Are we saving any money by contracting for four years versus just one year?” Roberts replied that aligning Recreation & Parks’ LAZ contract with that of the Parking Authority (which has four years remaining) will maximize efficiency. “The end of the four-year period will be the best time to tailor it to what we want to do and then they (Parking Authority) can do whatever they want.”

Recreation & Parks plans to disseminate a pre-season advisory to residents regarding online verification of vehicle registration. Residents who registered their cars after Oct. 1 must visit the Parks office to obtain their pass.

Roberts proposed establishing a separate fee for homeowners and renters who desire a pass but whose car is registered outside of Norwalk.  He added that a review of policies, procedures, and fees for non-residents is underway.

Also unanimously approved for advancement to the full Council was installation of two pay stations each at Calf Pasture and Cranbury Park as an alternative to paying by phone.

Does anyone know how much money the city collected from Calf Pasture Beach – did it even cover this fee? I will never understand letting a car enter the beach and then paying a company to drive around the parking lot and try to catch who hasn’t paid – instead of the old way of getting the $ right at the gate.

This is disgraceful – Norwalk is getting destroyed by punitive parking policies, seemingly unchecked and clearly against the sentiment of the residents. Time to lobby the Common Council and get this initiative overturned. Norwalk is becoming a cash cow for Hartford’s LAZ Parking (Rilling campaign contributor…), to the detriment of Norwalk