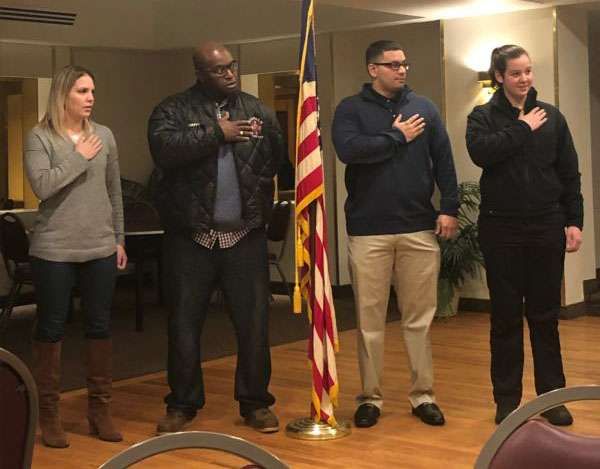 NORWALK, Conn. – Two probationary Norwalk firefighters recently resigned, according to Norwalk Director of Personnel and Labor Relations Ray Burney. Both were female and took their oaths in December.

This news comes as the fire department looks to staff up via a new firefighter recruiting. On May 18, Chief Gino Gatto told Fire Commissioners that he expected 15 vacancies at the end of June. The department has 143 sworn members, according to the City’s 2021-22 recommended operating budget document.

Four firefighters were sworn in Dec. 17, according to Fire Commission minutes:

Roach and Smith resigned “recently,” Burney said Monday. “Out of respect for their privacy, and in accordance with City Policy and various laws and regulations, no other information will be provided.”

Efforts to reach Roach and Smith were unsuccessful.

Smith was present at the May 18 Fire Commission meeting, though not seen or heard from on the YouTube video. She was there for an executive session regarding personnel, Norwalk Fire Chief Gino Gatto said. Also there for the executive session with the three-member Commission were Burney, Norwalk Firefighters Association Local 830 President Bill Ireland, Deputy Chief Adam Markowitz and Assistant Fire Chiefs Ed McCabe and Albert Bassett. The session lasted about an hour.

The meeting featured a report on recruitment. There were 1,220 applicants for the entry level firefighter test, of which 155 were Norwalk residents and 63 were Connecticut certified firefighters, McCabe said. That was “with approximately 37% diversity so working with fire fighter app and working locally in the community, I think we were able to get the applicants that we were looking for.”

Mayor Harry Rilling said, “That’s really good numbers, because with your shortage, right now, it’s going to be critical to get you back to staff.”

“Out of respect for their privacy, and in accordance with City Policy and various laws and regulations, no other information will be provided.”

In other words, it is a secret, and if you do not like it…too bad.

Is it normal for a town the size of Norwalk to have 143 firemen? Seems a bit much but what do I know.

Roach is the daughter of Stamford’s Fire chief.

What testing process was she hired under?

We should have more firemen. They are underpaid and over worked. Hire the best people for the job. Trying to fill quotas has bad results. The resignations speak for themselves.