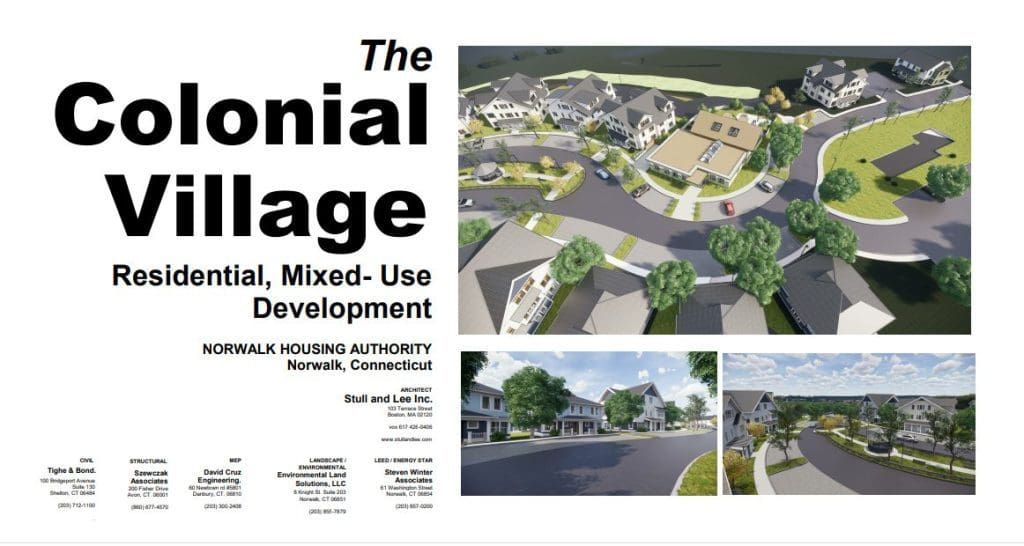 An illustration from the Norwalk Housing Authority’s website. The large building depicted at the upper center would be a community center.

NORWALK, Conn. – Changes are coming to Colonial Village: the Norwalk Housing Authority plans to begin a “gut rehab” on all 200 public housing units later this month, and then in 2022, begin constructing 69 apartments on 7 acres of open space it owns behind the complex.

The $34 million renovation will bring other changes. The new community center “is not just going to be a Learning Center,” Norwalk Housing Authority Executive Director Adam Bovilsky recently told the Zoning Commission. “It will have some administrative offices in there and unlike now… there will be management staff on site during the day, which will also I think be a benefit to the community and the neighborhood at large.”

Low income housing tax credits (LIHTC) figure into the Authority’s planned construction of new housing. It would feature a mix of incomes, from market rate to families escaping homelessness.

Neighbors are supportive of the renovations but are gearing up to fight the expansion plans.

“If this plan were approved, it would have an extremely NEGATIVE impact on the quality of life for the residents and taxpayers in this community,” Derya Lantowski, a Cedar Crest Place resident wrote to NancyOnNorwalk.

Lantowski listed concerns that the expansion will:

Colonial Village, a public housing project, was built in 1951. Its tenants are subsidized by the U.S. Department of Housing and Urban Development (HUD). 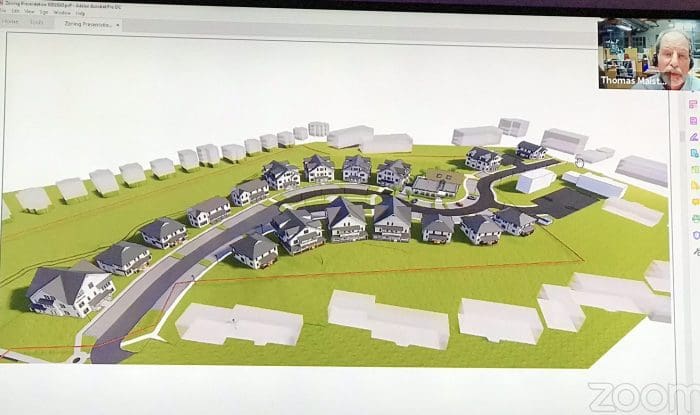 An overhead view of the planned Colonial Village expansion, presented by architect Thomas Maistros at the Sept. 3 Norwalk Zoning Commission meeting on Zoom.

Also planned is a 5,400 square foot community center “where the Housing Authority would offer after school programs for children, other types of programming, tutoring, weekend programs and maybe even some summer programming for individuals, students, children who live in this neighborhood in this development,” Suchy said.

At least seven apartments would be deed-restricted as “affordable” under State statute 830-G and Norwalk regulations, some would be HUD subsidized and some would be supportive housing, she said.

There’s also a .25 mile walking trail planned along the wetlands on the back of the property, Suchy and Maistros said.

The wetlands are overgrown with invasive species  but will “be cleaned up,” Suchy said. “they’ll be brought to a better functioning condition and improved with native species planted around not only the wetlands, but along that back edge of the walkway. Rain garden is proposed and other features such as that.”

The regulations were changed a few years ago to allow 1.3 parking spaces per unit in multifamily developments, so only 90 are required, but 138 are planned, Suchy said.

Traffic, Mobility and Parking (TMP) has suggested removing some West Cedar Street parking spaces to provide better sight lines from the driveway, she said. This is slated to go in front of the Traffic Authority this month. 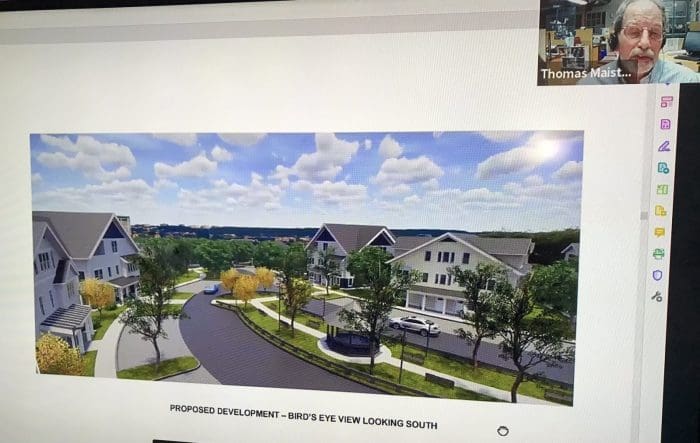 “It’s considered a national best practice to have mixed income housing,” Bovilsky said. “When we concentrate poverty in one place, like many of our developments are now, it tends to have poor outcomes on health, on education, on the economics of people living there.”

The Housing Authority has “seen great success” with mixed incomes at Soundview Landing, which has two phases “now fully open and occupied, where we have market rate units at $2800 a month next to low income housing, as you know, based on income and you know, $200, $400 and $600 a month,” Bovilsky said.

“In these communities, we tend to have far better outcomes again, as far as crime, education, how economics and all of that. So that’s the model we are using,” he said.

To get full 9 percent LIHTC, 20 percent of the housing units need to be supportive housing, so 14 units will go to families off the Norwalk Housing First Collaborative’s regional homelessness list, who will get a HUD subsidy and supportive services, Bovilsky explained.

The market rate housing won’t get the Soundview Landing rates, but “the idea is to again to mix in as a percentage of higher wage earners because that deconcentrated poverty and has better outcomes for the whole community,” Bovilsky said. “And then because we have the LIHTC funding source, probably the majority of our housing units will be affordable, according to the state 8-30 G standards of affordability.”

The Housing Authority will apply for the tax credits in October, he said. 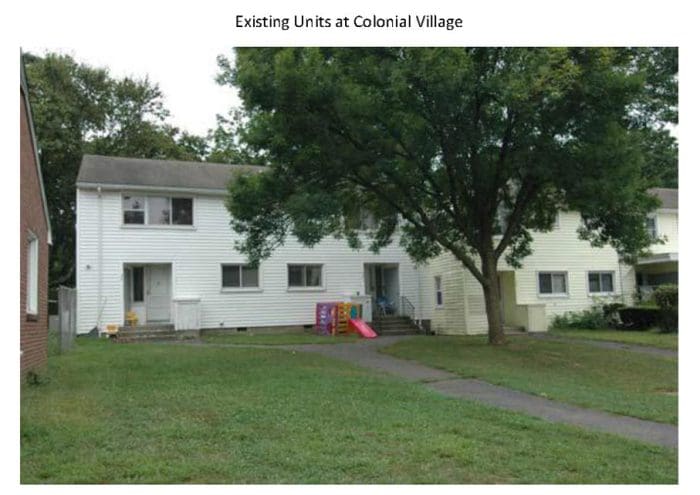 The Housing Authority has $18 million in reserves and will combine that with a $14 million construction loan to finance the planned renovations, Bovilsky said.

Speaking to NancyOnNorwalk last week, Bovilsky explained that 10 Colonial Village families will move out into apartments, and have their rent subsidized, to provide “swing space” for the remaining tenants.

Ten at a time, families will move into the on-site swing space and have their units revamped, he said. Then they’ll move back in. The 10 families that are off-site will come back after about a year. 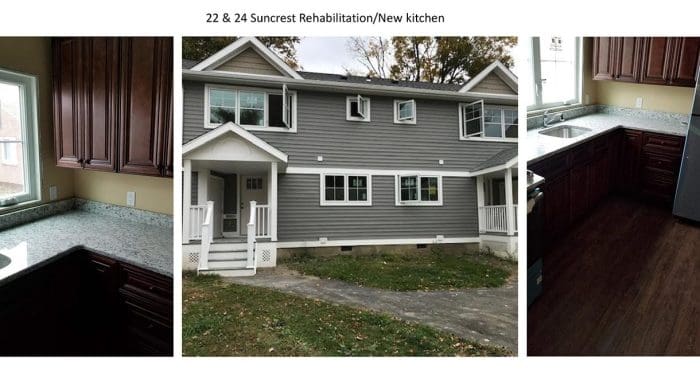 Maintenance of Colonial Village has been on hold because a major redevelopment has been long expected, Bovilsky told the Zoning Commission. “The budget has room in it to have substantial maintenance,” he said. “…The Colonial Village site gets some better funding than the federal development and we believe that we can very take care of the property in a very nice fashion, better than we can the federal developments that aren’t funded as well.”

She said, “I think it’s great that they want to improve the existing units, but adding the additional 69 apartments/18 buildings eliminates their only green space and further stresses the community with more traffic and people (already a problem in the West Cedar corridor).”

Chris Sci, also a Cedar Crest Place resident, said he was “dismayed” by the expansion plan.

“This 7 acres of open space is literally the only undeveloped land in the entire neighborhood!” he wrote, continuing:

“When we were kids in the 70s and 80’s we took tennis lessons on the 2 tennis courts, played baseball on the diamond, basketball on the courts, and games in the woods. The State and City have allowed this land and its facilities to decay and fall into an embarrassing state of disrepair over the past 20 years. Perhaps this was intentional to boost their case to develop it? Whatever the reason it is outrageous.
“A similar proposal was attempted in 2004 and failed, for good reason. This area is already overly congested with housing, parking lots, abandoned homes, buildings, and traffic. There has also been an increase in crime including several shootings. There is literally nowhere for people to go. The last thing West Cedar Street, Scribner Ave, Suncrest and Cedar Crest Place needs is more condensed housing, and cars/traffic to go with it.

“West Cedar Street from North Taylor Ave to Scribner Ave is a narrow parallel speedway/short cut for Routes 1 and 95. It is dangerous. From Technology Plaza to Scribner, with all the parking, and traffic, is almost impassible most days. It includes one of the most dangerous curves/corners in Norwalk. The street is already completely unacceptable. Cars and people everywhere. Not enough room for two direction traffic. Now the plan is to add hundreds more residents and cars?? Then in the process take away the only open space?”

Sci, on Wednesday, added, “We are in favor of renovating and improving the existing structures and facilities. This is good news that we only just learned of a week or two ago. We are obviously not in favor of the expansion onto the 7 acres of open space.”

Zoning Commission Chairman Lou Schulman expressed sympathy for the open space complaint, but said, “it will not affect my position on this development.”

“It’s a beautiful piece of property,” Schulman said. “And it just seems like a shame to do anything with it. But … it’s just, it’s very little of that left in Norwalk.” 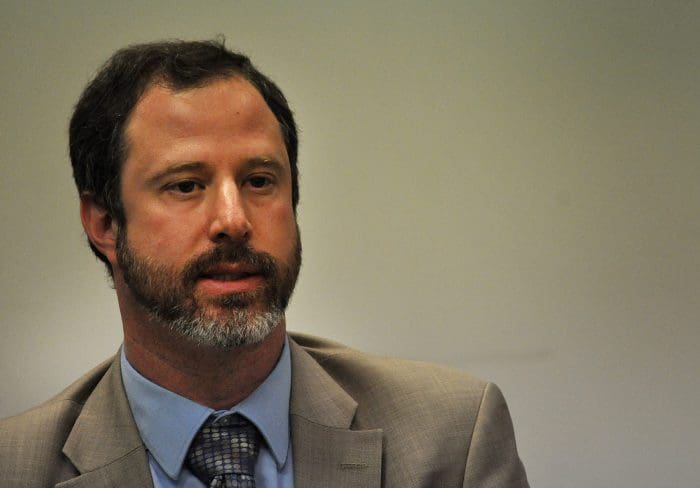 All of those waitlists are years old and have been closed for years, he said. When the Section 8 waitlist opened in 2012, the Authority received 14,000 applicants in three days, chose 1,200 by a lottery and some of those people are still waiting for housing.

It would be a shame to let the field sit there, “mostly unused,” he said. “I can tell you, we haven’t had a request to use it in a very long time. Sometimes we get requests for a soccer match or Pop Warner league football or that sort of thing. But we haven’t had a request in a very long time to use it and this field has just been sitting there. And it’s hard for the housing authority to watch this resource go underutilized with our waitlist, all being close, because they are years long.”

“This is just going to be a tiny-tiny chip off of a huge problem,” Bovilsky said. “But it’s a step that we can take.”

Who needs open space for children? They can just play on CT Ave.

Seriously, $34 million or $170,000 to renovate per unit? Will another new LLC be created to manage/own this? Where is this money coming from since they haven’t been able to collect on rents for 6 months? Will NHA ever produce a transparent set of financials on a monthly basis? Or will we just have to cobble through their website who’s primary function seems to be subterfuge? Is there any update on the financials of Washington Village? How is it this entity continues to have the most expensive to build and maintain, yet most run down facilities in the city year after year. Decade after decade?

With 2 foot high grass covering the field until it was finally cut last week – how could they possibly think it could be used for anything or by anyone except for maybe a farmer to graze his cows.

The headline says “Norwalk Housing Authority plan Colonial Village Redo.” In actuality it is a redo PLUS an EXPANSION of 69 more units on a 7 acre undeveloped parcel.

This 69 unit expansion will not be physically connected to the existing Colonial Village. It is in fact a separate high end apartment complex with some affordable and a few low income apartments. For all the talk about the need for more low income housing in Norwalk, this development will add 11 units. The rest will be market rate along with some designated “affordable”. Is this worth losing one of the last large open spaces in this part of Norwalk?

This land should be used for the benefit of the existing residents of Colonial Village and the surrounding neighbors. Building dozens of new expensive high end market rate units does nothing for the current Colonial Village Residents.

The Community Center should be rebuilt on the property along with the proposed walking trails, and other outdoor recreational improvements. The existing tennis courts, basketball courts, and baseball field should be renovated and or replaced, and there is room for a soccer field as well. Along with this should come improvements to West Cedar Street, Scribner and Suncrest Roads. Adding sidewalks and even bike lanes, and removing the on street parking that make the corner on West Cedar near Scribner so dangerous.

We wholeheartedly agree that the current housing units; both interior, and exterior, are in dire need of renovations and upgrades. I have spoken with residents who claim they have not had working appliances in months. All put on hold in the hopes of cramming this new development through first, to take advantage of state grants (your tax money) to build 69 new units on this land.

If you agree Colonial Village deserves to be improved, renovated, and landscaped, but are not in favor of expansion, the development of this open space, and all the additional traffic and environmental strains to Norwalk, then please join us in opposition.