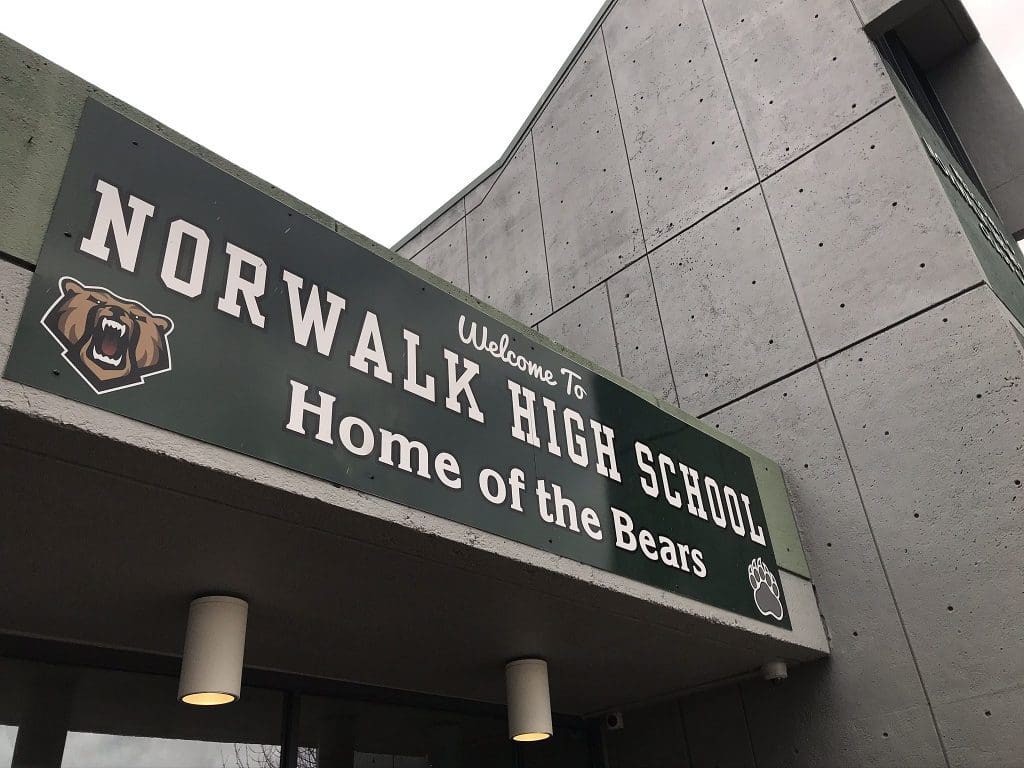 The new Norwalk High School will likely be built where the softball field is now, project manager Jim Guiliano said in 2020. That may change.

NORWALK, Conn. — Two new schools got nods of approval Tuesday evening, one with financial support and the other with words of endorsement.

The Common Council green-lighted a $6 million-plus contract with an architectural firm to design a new Norwalk High School, on a 13-1-0 vote. Recognizing an equity issue, multiple Council members expressed a desire to build a South Norwalk school as soon as possible.

“Unfortunately, there were plans that were in place that turned out not to be feasible, and we had to pretty much start over again,” Mayor Harry Rilling said, reaffirming that City leaders are “absolutely committed to move forward with whatever plan is deemed appropriate for a South Norwalk school and to do so as quickly as possible.”

Kaestle Boos Associates Inc. will now begin designing a new Norwalk High School and it will consider building the school on the athletic fields. It’s possible the school will include a new pool; this depends on how the finances shake out.

The surprise plan for a high school – it wasn’t on anyone’s radar screen before mid-2019 and the City had already committed to building two new schools and renovating two old ones – was approved by the State for 80% reimbursement, but at a lower cost than City officials expected initially. That’s $189 million rather than the $225 million the original concepts were based on.

Council member Thomas Keegan (R-District D) cast the only no vote on the $5,954,083 contract, with $297,704 possible in additional expenses. Council member Kadeem Roberts (D-District A) was absent.

“I believe that at the end of the day, we’re going to be unpleasantly surprised at how expensive this project becomes,” Keegan said.

Also, “We talk about equity, we talk about fairness, the importance of being fair and I think that we must remind ourselves that the elementary school in South Norwalk was closed in the 70s. That was 40, plus years ago,” Keegan said. “And I believe all of our efforts to build new schools should include them. And I think an elementary school in South Norwalk should be our priority and I cannot support a new Norwalk high school because less than 18 months ago we didn’t know we needed it. We didn’t know we wanted it.”

The new school plan dates to January 2016, when consultants charged with doing a facilities feasibility study recommended that the Board of Education build a new school on the Nathaniel Ely site in South Norwalk and renovate Columbus Magnet School, also in South Norwalk. Renovating and expanding Naramake Elementary School and Ponus Ridge Middle School were also highly recommended.

Five years later, the Ponus plan has come to fruition but the Ely plan has not. South Norwalk leaders objected to the linchpin of that plan, using 4 acres of Springwood Ely Park in exchange for land elsewhere in the city, and the Connecticut Department of Energy and Environmental Protection (DEEP) has not approved the necessary land swap.

“I hope that it isn’t one or the other, that we can move forward with a plan that is equitable for South Norwalk,” she said.

“Actually, both schools will end up impacting those kids either way. But, you know, I appreciate you saying that,” Révolus said.

Norwalk allocated $70 million for the Columbus/Ely plan, so a South Norwalk school is “certainly something that has been in the works,” Council member Tom Livingston (D-District E) said. “While it’s taken longer than any of us would have liked, you know I’m not here to defend anybody, but I do think it is important and we are working towards it.”

Rilling said he and other Council members had just come from a District B Democrats community meeting where a South Norwalk a neighborhood school was discussed.

“It was clear that everybody supported a neighborhood school and that we are going to do everything we can to move it forward as quickly as possible,” he said. The Board of Education has a new facilities study underway, “so we need demographic information, but we are working very hard to make sure that we do end up with a South Norwalk school, because having to transport children from one end of town to the other certainly compromises their educational experience.”

Yes, a new Norwalk High School was not planned 18 months ago, Rilling said.

“However, when the state of Connecticut offered to reimburse the city of Norwalk, for 80% instead of the normal 30 or 32%, we felt that it was a good idea,” Rilling said. The Council and BoE voted for it, “because that school is also over 50 years old, and in need of tremendous repair and putting new money into the repairs of an old school was deemed not very wise.”

City leaders had promised it wouldn’t delay other projects and it hasn’t, Rilling said. “We’ve already moved forward with the Ponus Ridge. We’re now moving forward with Jefferson, we’re moving forward with design for Cranbury. And we are working diligently to try to have one, or perhaps even two, preferably two neighborhood schools in the South Norwalk area.”

What about the funds for running the new Norwalk High School? Who will pay for the students who are forecasted to attend from neighboring towns? This topic continues to be avoided. At this point, the City won’t even fund contractual increases for NPS staff …

The daughter comes through the front door beaming – with her giant Bergdorf Goodman shopping bag swinging by her side. Terror strikes the heart of her dad – who gave her the visa to get some canvas sneakers for cheerleader tryouts.

Well, as I was looking for the sneakers – I saw this pair of Christian Louboutin Epic et French Patent Lace-up Over the Knee Boots – and they were “On Sale” Dad. Oh – I couldn’t never afford them at full price (35%), but since they were on sale (80%) – they were a steal.

How much did you save?

What did they cost?

This is what Harry is trying to sell you …….

Please think twice or three times about building a new school on athletic fields.
High School students going three or likely five years without these outstanding facilities?
The impact this will have on what should be some of the best years of their lives.

“Hey thanks for offering 80% reimbursement for the Highschool but my voters have told me we really need the money for more pressing school construction such as South Norwalk and a long list of others. Hey it’s our money. We pay more than we get. ”

Can someone get his attention.

So you have a 2007 car with 135,000 miles that looks like it’s going to need $2,500 of immediate repairs and likely a brake job in the not to distant future- maybe a catalytic converter too not to far down the road as well. You know you could drive it another 3 years so long as you put in those repairs and maintain and upkeep the car too. It’s worth $4,000 without the repairs. Someone comes up to you and tells you that they’ll 80% of a new $40,000 car for you which comes with a 5 year warranty. Patrick Cooper what do you do?

@Steve – well, you left out a few details. First – I have other cars, and some of them are in far worse shape – almost undrivable. Also, there are members of my family who have no car at all, they are left with having to take a bus across town – every day. Then there is the matter of limited funds (I can’t just tax myself – like Norwalk) – I have to spend wisely.

Further, upon reading the fine print – it turns out that the $40,000 car actually will cost $70,000 – once all the design changes, delays, lawsuits, padded hours, and unforeseen costs are applied. Also – the 80% turns out to be for only $32,000 of the cost – and there is a history of non-qualifying costs that shrink the 80% further. Also, I find out – the car doesn’t belong to me exclusively – I have to share it. My insurance triples. My personal property taxes increase. The old car – I just put four new tires on it – did a tune up – and added a pool. I get nothing on the trade in. And – the other cars continue to deteriorate – and the kids we don’t love as much still take the bus.

Steve – enough with the analogies – this is pure politics. This is forced regionalization in sheep’s clothing – care of an ambitious politician named Duff – who has our local D-party in a headlock. A distraction keeps unequitable ECS funding out of the conversation. Recall, the prior facilities study was done by folks well associated with the “other” party – and so Bob’s first push (Harry by his side) was “Fix it First”. Total fiasco – that Harry flip-flopped on like a Maritime Aquarium seal. Then – without local input, Bob did an end-run around the standard process and surprised everyone with a cocktail napkin planned school we didn’t need, we didn’t ask for, and where there are many, many other far more pressing needs in the city. But that’s not the point with all of this – city politicians haven’t been listing to city residents for 8 years. Look at what was shelved, re-scheduled, or crossed off the capital budget list – all because this project somehow took precedence. Wait until inflation raises those borrowing costs.

My analogy is spot on. We needed something practical and affordable. We got something frivolous, wasteful, selfish, and completely unaffordable – under the guise of “savings”. When it’s all just pure politics. Norwalk loses again.

@Steve. Bad analogy. It’s more like this. Take your car and put a brand new motor in it. Brand new interior. Fix all the rot. Paint it up fresh and new. And put it on your credit card that will take you another 15 years to pay off. Then someone comes along with a too good to be true pile of free money to get you to spend double what you just did on restoring your car to new shape for a new one that the neighbors are going to hate. On top of this. It will come with strings. You’ll have to throw the refurbished car out that you’ll still have to pay for. You’ll be paying 2x what you paid for it on the new one. And you’ll have to get permission on who can ride in it and when. This free money could have gone to families without transportation in neglected areas of the city or into something else, but the car dealer needs to be able to have an advertisement for their businesses, so they are using you the willing dupe to pay for it. Got it.