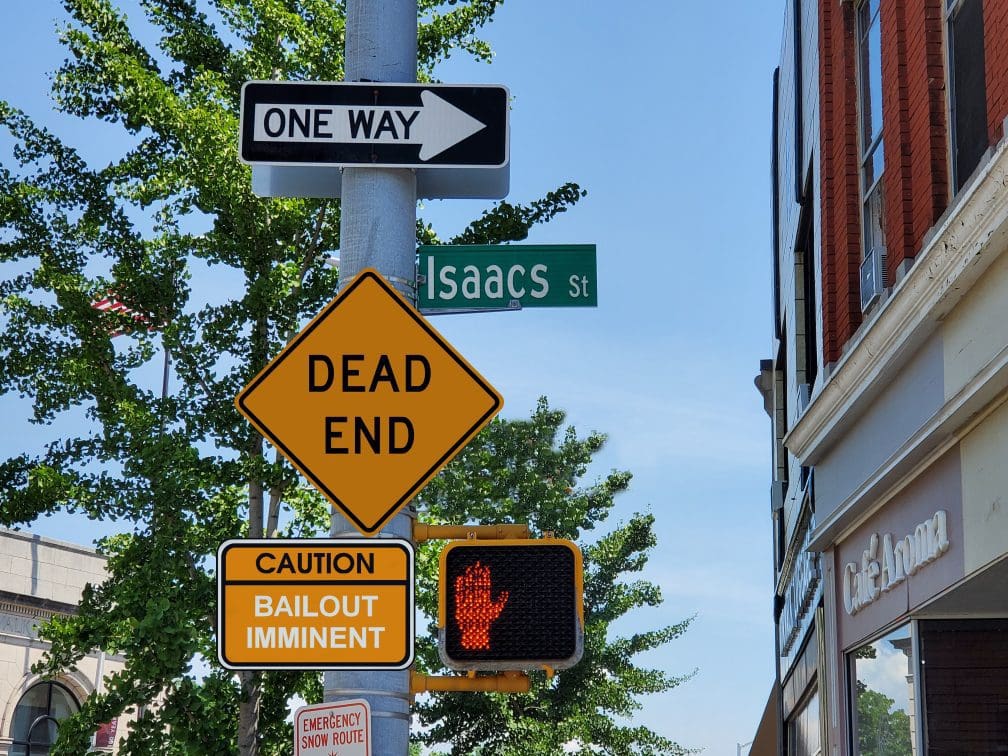 We’ve been at this for years, through multiple mayors, and we still seem to wind up right back where we started, with the flood of 1955 and the people’s hopes pinned to a plan that’s doomed from the start. The Citibank plan coming before the Common Council Planning Committee Thursday night permanently makes Isaacs a one-way dead end street.  There’s literally no exit.  We’re destined to circle in an endless logic loop where big government tells ordinary folks—Norwalk taxpayers, business owners, employees and customers—what’s good for them.  We tell them we don’t like it. And they hit repeat.  We are trapped in hell with people we don’t like, who don’t like us, and there is no escape.

The latest plan to “Save Wall Street” is doomed to fail.  You should oppose the plan with every ounce of energy you have but not get your hopes up too high because the City leadership is going to do what they want in spite of you.  That does not mean that we should just accept our fate, put the shovels in the ground and move on.  We are in this for the long haul.  The project broke ground under POKO in 2014, and five years later all we have to show for it is a lost parking lot and a hulking skeleton wrapped in Tyvek.  Whatever revitalization is going on—and it IS going on—has happened in spite of POKO and not because of it.

Citibank, who owns the property, and John McClutchy, the “preferred redeveloper” have already been at this for more than two years.  Maybe you just heard about McClutchy/JHM yesterday, but trust me, this deal has been percolating since before Ken Olson passed away.  And the logistical hurdles to getting the new project off the ground are considerable.  You know about the one-way street to nowhere—Isaacs.  How can you have traffic enter on Isaacs and wind up in a dead end with no way to leave?  That can’t be legal, right?  But the illegalities and zoning conundrums don’t end at the dead end.  In June the Zoning Commission passed changes to the Central Business District, or CBD.  There are new height restrictions of 55’ or four stories.  The Tyvek Temple is six stories, but there’s no Certificate of Occupancy.  You can’t grandfather in a pre-existing non-conforming half-built structure that’s incomplete with no CO.  I mean I’m sure the City will try.  And since the Mayor has appointed nearly every person on every land use board, they may just get their way.  But not without a lot of time, effort and probably some subterfuge too.  Remember this is “NO EXIT.”

To add to our infinite misery, this 100% affordable project requires a Gordian knot of financing tools to be feasible for the developer and to make money for the bank.  None of these government / taxpayer backed tools roll out of bed ready to face the day.  You have to get in line. And the lines are long.  Years long.  And good luck getting low-income housing tax credits (LIHTCs) while there are outstanding lawsuits. POKO got them originally thanks to Norwalk’s State Sen. Bob Duff.  But there weren’t any legal challenges back then.  And they still had to wait in line.

Let’s take a headcount of the lawsuits.  There’s an easement lawsuit (mine).  There’s a Redevelopment plan lawsuit (mine again). There is the El Dorado Club Inverse Condemnation lawsuit (John Dias).  Of course there is the lawsuit originated by Corporation Counsel Mario Coppola last June against me and Rich Olsen that has cost the taxpayers approximately $700,000.  There will be zoning lawsuits (see above) the abutters have either already filed or are lining up to file. Amending the questionably valid land agreements opens the city and agency to legal challenge from any affected party, of which there are many.

My lawsuit attacks the roots–the entire redevelopment plan–which is illegal, and it is the illegal plan that gives “illegal” life to everything else. Kill the roots and everything else dies. When the first plan consultant hired by the RDA didn’t give them the biased “Slum & Blight” confirmation they were seeking, the RDA found someone else more willing to declare the area “blighted” despite the fact that it isn’t.  The illegal redevelopment plan is just the tip of the iceberg.  There are problems with the land use agreement (LDA) and the loan recognition agreement (LRA).  Multiple parties, including Frank Farricker and myself, are successors.  The old Globe Theater—now the Wall Street Theater—was always part of phase I of the plan.  New Street #1 which requires the Eldorado Club and the People’s Chicken properties are all in the plan area, meaning the redeveloper or some other entity must first acquire and then demolish these parcels in order to execute the plan.

To amend the land agreements, if valid, would require written consent from all parties and successors even to make small changes like extending the time to complete, nevermind removing entire streets.

The weight of doom hangs heavy in the air.  So why even try?  Because I’m an optimistic person and I believe if we pool our collective resources—our ideas, our needs, our desires and our vision for Wall Street—we can create a plan that leans on the strengths already in the neighborhood.  We can sustain a vibrant arts district that supports small businesses and attracts new residents.  Many of the tools are already in place—the Wall Street Theater, the Garden Cinemas, Factory Underground, the Mad Lab, ARC lighting, and Space 67.  Stores.  Restaurants.  Barber shops. We are a community of creative minds who also happen to be business owners.  We all recognize the need to add density—you can’t run a successful business without customers.  But there are other ways—better ways—to add residential units without tearing up the fabric of an historic district.  Left to our own devices, we can create apartments that are truly affordable and not just “affordable” according to some state statute that seems to have been invented to help rich developers get taxpayer funded tax credits.

Some people think things are darkest before they go completely black.  I believe with your help we can bring a new dawn to Wall Street.  There may be NO EXIT today.  But NO EXIT does not have to define our tomorrow.

Norwalk’s elected City officials have been unable to encourage development of an attractive Downtown with office buildings bringing good jobs and a vibrant place to congregate and visit for many decades. Our shabby Downtown remains an embarrassment. If City voters wanted real change they’d seek out candidates with business backgrounds and a commitment to creating an attractive City Downtown.
Whether that will occur at some future date remains unknown. A challenge for a future generation.

where is the fire marshal with a one way street with no exit,this has got to be against every safety law. but whose counting?