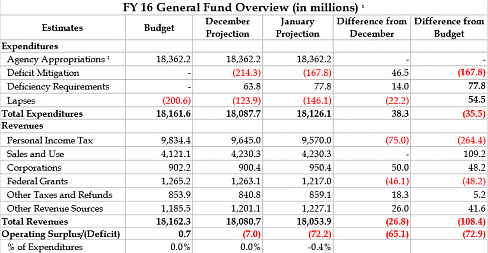 HARTFORD, Conn. – This year’s budget is $72.2 million in the red. That’s according to the legislature’s nonpartisan budget office.

The projections, released late Monday evening by the Office of Fiscal Analysis, show the deficit has increased $65.1 million since a December special session to mitigate future budget deficits.

That’s on top of what budget analysts believe will be a $507 million shortfall in fiscal year 2017, which means when the General Assembly reconvenes in just two weeks they will need to work to resolve a nearly $580 million deficit.

Legislative analysts said part of the reason for the deficit is that Gov. Dannel P. Malloy’s administration hasn’t identified the $46.5 million in savings it promised to identify as part of the December special session. That, and a decline in personal income tax receipts and a $38.3 million increase in spending were cited as the reasons for this year’s deficit.