Knopp: ‘Glad to step down’ 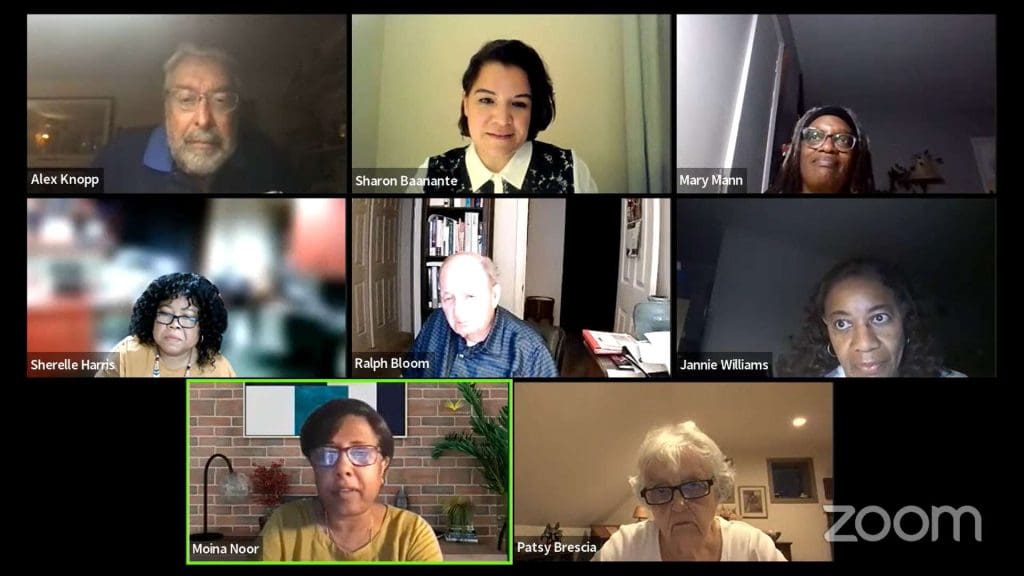 Thursday’s Norwalk Public Library Board of Trustees meeting on Zoom.

NORWALK, Conn. — Moina Noor was elected Norwalk Library Board of Trustees chairwoman last week, in the first election of Library Board officers held in at least two years. She replaces former Mayor Alex Knopp, who has been chairman since July 2016.

Patsy Brescia was re-elected vice chair and Janine Williams was elected treasurer. Brescia said a secretary is in the bylaws, but no one has held the post in years.

In 2017, Knopp said that he had aspirations of modernizing and expanding the library as well as dealing with its “atrocious” parking. His tenure began as Norwalk citizens fumed over a plan by real estate broker Jason Milligan to build apartments at 11 Belden Ave., next to the library. The Norwalk Zoning Commission approved Milligan’s plan but Knopp led the Library Board Foundation, a nonprofit not under City control, in an appeal. Eventually, the City paid Milligan $460,000 for a six-year purchase option for his Belden Avenue property. This eased the parking difficulties.

It’s since developed that library patrons can park at the First Taxing District property at 3 Belden Ave., adjacent to the library

On Thursday, Knopp said, “I think we’ve made tremendous improvements in the library, preserved the parking, prevented the condos from being built, bought the bookmobile, expanded the internet, and mostly kept the library as a wonderful, functioning institution during the COVID problem, which I think was a great service to the city by the staff in keeping up its wonderful programs.”

Under the July 2017 option agreement, the City could buy Milligan’s lot next to the library for $4,885,000. In April, Mayor Harry Rilling said he didn’t know if the City was going to buy the property.

There’s been no movement on this. CPTV President Jerry Franklin, who made the deal, retired in June 2019.

Knopp said Thursday that it’s “been a real honor to serve and well worth all of the time. I’m glad to step down.” Noor would be an “excellent choice.”

Noor was appointed to the Board in January 2017. She told Knopp he’s “been an excellent chairman.”

“I have personally learned a lot from you and the way you conduct your meetings, and I will tell you that I wanted to join this board, because I knew you were chairing it. And I knew that it would be a Board in which we would get some things done,” Noor said.

“Alex, I really want to commend you and thank you for all of the insight and your hard work that you put into your chairmanship, and bringing us forward,” Brescia said.

Mary Mann made the nominations. Williams said she was prepared to nominate Brescia for chairwoman but she understands the “time constraints.”

“I will support Moina as chair and I will look forward to working with her as well,” Williams said, also telling Knopp his service was excellent.

Board member Sharon Baanante thanked Knopp for his leadership.

“You really led us through a global pandemic. And you know, and you did it calmly. And I just I’ve really enjoyed your leadership. And I learned a lot from you.”

Minutes and agendas available online show no election for Library Board officers since at least August 2019. There are no agendas online for meetings held between September 2016 and August 2019.

Congratulations to Moina and thanks to Alex for his limitless contributions.

Thanks Alex for your usual job well done!

Alex, Thank you for your service.

We ended up paying for an expensive purchase option due to decades of short-sightedness in not buying the property on which the parking lot sits. Now the process will repeat, as the option will soon expire. I guess the city would rather pay an extortionist rent for the space, with the attendant contentious negotiations

I would agree with Knopp on the library. It’s a terrific place that’s probably underutilized by Norwalkers. I’ve only had positive experiences with staff and materials. Congrats on a job well done.
My only regret is Alex didn’t bring get those same results with his series of disastrous Oak Hills decisions when he was Mayor. Oak Hills and Norwalk are still suffering the consequences 20 years later!!