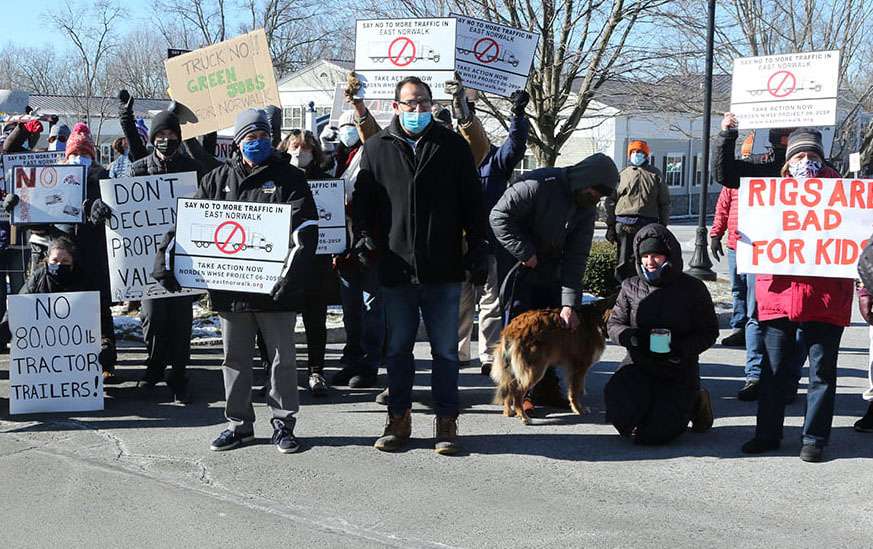 Protestors assemble recently in a rally held on Strawberry Hill Avenue, where trucks would have traveled to a distribution center in Norden Place. At center is Farhan Memon, organizer of the Sasqua Hills Neighborhood Association, which formed in opposition to the project. (Richard Bonenfant)

NORWALK, Conn. — Would-be operators of a distribution center in Norden Place have withdrawn their application for the project.

The Zoning Commission has cancelled its public hearing, scheduled for 6 p.m. Monday, on the topic of the distribution center.

“Residents certainly made their voices heard regarding this project. It was no secret how many in the community felt. It was very clear this project was not good for the community and I think it’s a positive outcome,” Mayor Harry Rilling said in a statement.

Zoners were considering a proposed conversion of a 330,000 square foot portion of the existing building located at 10 Norden Place to create a new warehouse and wholesale distribution facility with 19 loading docks and changes to the site’s existing parking lot and driveways. It was estimated that the business would produce 180-190 truck trips a day, with the owners promising to keep them between 6 a.m. and 8 p.m., “to the extent commercially practicable.”

The proposal generated much opposition, including an East Norwalk Neighborhood Association petition signed by more than 1,700 people and statements from the Norwalk Board of Health and the Bike/Walk Commission enumerating reasons why it should not be approved. An opposition traffic analysis predicted that it could actually generate 400 truck trips a day.

That prediction was done on behalf of the Sasqua Hills Neighborhood Association, which was formed in response to the application, and submitted a week ago.

Attorney Carolyn Cavolo, representing applicant Norden Place KB, LLC, withdrew the application Monday morning. She dod not respond to an email asking for an explanation and if the applicant planned to resubmit the application. Planning and Zoning Director Steven Kleppin said he had no further information.

“It’s wonderful news that the application to build a giant warehouse distribution facility in East Norwalk have been withdrawn. This was an ill-conceived project that would have affected the health and safety of residents. This victory is a testament to the power of community action. It shows that by coming together and making our voices heard we don’t have to let out-of-town developers ruin our neighborhoods.

“So many people in our community put their time, talent and treasure into organizing a united opposition to this proposal. Through everyone’s efforts we were able to not only provide information on what this development would mean on a personal level, but our experts and consultants were able to show the misinformation and gaps in the applicants.

“We now have to shift our focus to ensure that Norwalk’s Zoning Commission considers imposing a moratorium on development within the R&D and Light Industrial Manufacturing Zone that this property sits on. We to properly consider how future development in these zones fits in with the East Norwalk TOD plan. We also need to re-evaluate the zoning process so other neighborhood organizations don’t have to raise thousands of dollars to fund lawyers and consultants. Doing so places and extraordinary burden on citizens and is not sustainable.”

“On behalf of the East Norwalk Neighborhood Association, we want to express our gratitude to the thousands of residents, the many business owners and their employees, and the civic & city agencies who joined us in opposition to the Norden Place Application by writing letters to the Zoning Commission, signing the petition, placing lawn signs, funding our communication campaign and the Sasqua Hills Association legal fund, conducting research for us, distributing fliers, and speaking at the first public hearing.

“While we had petitioned for a Denial, we do celebrate the withdrawal of this Application, and recognize it was allowed to be filed only because the use was allowed by Special Permit, and was not included in the current Industrial Zone Moratorium that was passed last year. Following a short break ENNA will begin the efforts of reviewing ALL uses, as-of-right and Special Permit, throughout every East Norwalk building zone. We will make suggestions to Zoning on what should be removed, adjusted or added that will be in the best interest of East Norwalk, and to ensure a key purpose of zoning to preserve the rights of residential property owners and protect us from incompatible uses.”

Wow, this is great news. The people were heard -and apparently the handouts were not enough. Farhan Memon is the same guy from the west Norwalk mosque fiasco??

Bobby Lamb said it succinctly AND correctly: “Literally no one except the business proposing it is for it.”
Wondering where those said “experts” are now and if/when we will hear from that attorney about our “heartfelt” feelings again.

I am just so relieved that the efforts of so many community members halted this horrific proposal! The silver lining has been meeting a lot of you for the first time and getting to know others better! Just hearing the comments from so many neighbors about their love for East Norwalk was so touching. Thank you to Nancy for helping us spread the word about this horrific proposal! A big thank you to Diane Cece and the East Norwalk Neighborhood Association for your amazing hard work and dedication! Also thanks to the Sasqua Hills Neighborhood Association and Farhan Memon for all of your contributions and dedication to this cause! I’m also so grateful to the wonderful neighbors who protested with us at the rallies, wrote letters, attended meetings, made contributions, signed petitions, and helped to spread the word! We have a great community, and we need to stay involved to preserve it!

All this means is they are going to rewrite the proposal. They haven’t given up by any stretch.

BAS, the answer to your question is “yes.”

Thank you Diane and everyone who took to time to protest, write letters, sign petitions, discuss it with friends and neighbors and help in any way. I am willing to bet that was round one. Stay vigilant!

Be prepared for the next proposal…they will wait until the public is distracted by the next social uprising and focused on that issue. Then they will submit application like a stealth bomber.

It looks like our “heartfelt” mobilization has worked for now. But they didn’t sink all that money to just walk away. They will be back. We must be vigilant.

As other commenters noted, this was a great catalyst for people to get involved and hopefully stay involved. This is why special permit processes exist. That so many special permits slide through unnoticed is less anyone “sneaking by” and more due to a lack of civic engagement.

Bravo to the community groups and citizens (and Nancy and others for keeping everyone abreast,) and let’s hope people are encouraged to stay involved in the happenings here!

Happy to hear this was withdrawn. However with potential of a new proposal and given the railly of great people coming together for the common good of Norwalk. Why don’t we once again collect our ideas and strength and come up with our own proposal?! Such as, the new YMCA site in Norwalk or a Community Center specializing in kids. Once we are allowed to come together again socially, it is my belief that it’s our children who so desperately need to be around one another again.

Congratulations to all who petitioned, protested and spoke up to protect East Norwalk. Special kudos to the ENNA and Diane Cece, the SHNA and the many other groups, organizations and individuals who banded together to stop this destructive proposal.

Thank you for the great coverage, Nancy!

I am incredibly proud of the amazing Diane Cece, ENNA, SHNA, and all our community activists and residents who fought this egregious application! Thank you also to the Norwalk Board of Health for unanimously voting in opposition of the application alongside us, and, through their advocacy, possibly earning the opportunity to weigh in on the decision making process on future applications issued which will compromise our health and safety. Reform is on the horizon thanks to our community coming together. We are celebrating a small victory… Democracy was hard at work fighting this application, and the power of the people made the difference here! Thank you to everyone who worked so hard alongside us to achieve this outcome!

The bigger issue, which we’ve been well aware of for a long time, but which has come glaringly to light through this unconscionable Norden Warehouse Special Permit Application, is that zoning reform needs to happen sooner rather than later in Norwalk, to prevent applications such as this from bringing environmentally hazardous industrial uses into residential neighborhoods. As such, our hard fight must continue. 10 Norden Place is still an industrial zoned parcel, and nothing is stopping this applicant from trying again, or other applicants with similar horrible proposals from applying. Harry Rilling, who had campaigned to overhaul Planning & Zoning in 2013, has made NO efforts in fulfilling his promise. Neither has John Kydes, who has been by his side since 2013. Common Council member Kydes’s poor policies and his inaction on zoning reform are why we were placed in this horrific situation in the first place! Our fight was an anxiety inducing, costly ($$$), mentally exhausting, time suck nightmare. I dread additional fights on future applications, and being placed in the position of us, once again, having to do the job of the city until our elected officials decide to finally get serious about zoning reform. I hope residents remember that they should not have to constantly be on watch and stressed out about future predatory applicants who care about profit over their quality of life when it comes time to vote. Together, Let’s fight for zoning reform!

Other than Mayor Rilling showing up at one of the demonstrations, it doesn’t seem any of the local politicians turned out to help East Norwalk. (Correct me if I’m wrong.)

No Ed, you’re not wrong. In fact, no politician, including our in-district Councilperson, came out in any official capacity to speak against the application. Shocking, I know.