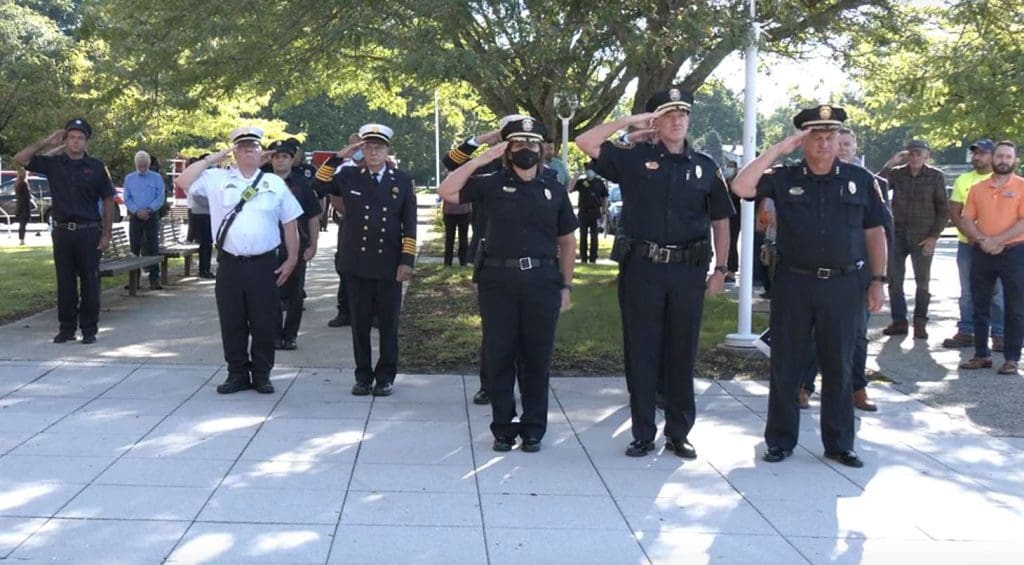 NORWALK, Conn. — Norwalk marked the 20th anniversary of Sept. 11 on Friday with personal details of local residents who died in the attack on the World Trade Center and a testimonial from a Norwalker who lost her brother.

“I miss him. My memory of that day is still a blur. And long after that, time stood still,” Kathryn Hebert said. “This violent, awful event impacted our country, our way of life, our very being, but it is different for me and my family, and for many others. It is a personal tragedy, and it’s still very difficult, even after 20 years.”

The annual City Hall observance began with Mayor Harry Rilling recounting how an ordinary fall day turned to horror as planes struck the tall New York City financial center buildings, the Pentagon and Shanksville, Pa. He emphasized that of the 2,977 people who died, 343 were firefighters and police officers who sacrificed their lives while trying to help others.

America got kicked in the stomach but got up stronger and there were patriotic flags everywhere, he said. “We can’t ever lose that feeling of togetherness, oneness. And we can never ever forget the heroes of that day and those that perished.”

U.S. Rep. Jim Himes (D-Greenwich) reviewed the meaning of “never forget,” beginning with, “We owe it to their families to know that as horrible as their tragedy was, their loved ones will be remembered.”

He said, “Let’s never forget how we felt afterwards, horrified, consumed with the tragedy. We live in enormously angry times right now…. When you’re angry, maybe just take that extra second to remember how we felt 20 years ago, where what united us was more important than what divided us.”

Common Council members read the names of “our own,” whose lives were lost:

Patrick “had just celebrated his first anniversary with his wife, Carolyn, and they were expecting their first child, a son. He was very excited about this baby,” Dominique Johnson (D-At Large) said.

When you couldn’t find Curioli “in the bleachers cheering on his teenage son’s baseball or football teams, he could typically be found in the garage of his home knee deep in a woodworking project,” Tom Livingston (D-District E) said.

Works “always had his nose in a book,” Kadeem Roberts (D-District A) said. “The Works were building a house in Rowayton, Connecticut, to house all those books, as well as their 3-year-old Alison. He would climb the ladder to the third floor, with its view of Long Island Sound. That floor was going to be his library.”

Hebert, former Director of Transportation, Mobility and Parking, was on maternity leave, looking after her recently adopted 1-year-old daughter on Sept. 11, 2001. Her husband, a Norwalk firefighter, called and told her to turn on the television. She did, just in time to see a plane strike the second tower. That’s where her Lewis, her brother, worked on the 89th floor.

He left a wife and four children. The youngest was a year old.

Lewis “lit up a room when he walked into a room with his intoxicating smile, and is bigger than life personality,” Hebert said Friday. While it’s a tragedy for her family, “It is important that we continue to remember the 9/11 event and learn from it, that this is about humanity. And we all are responsible for humanity and that we embrace and celebrate our differences.”