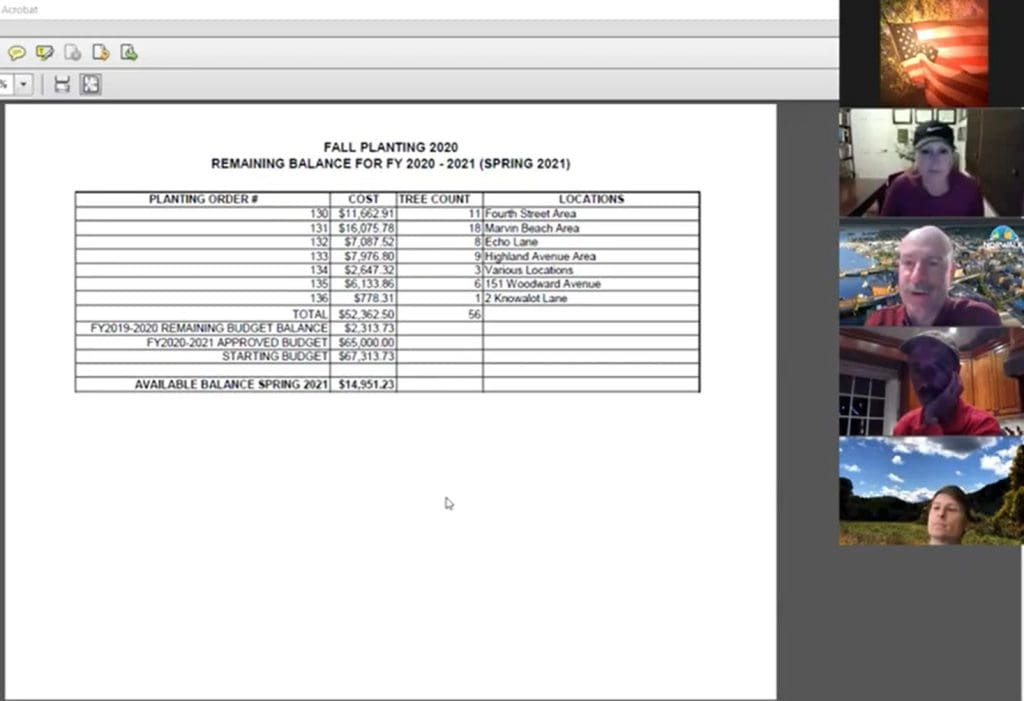 NORWALK, Conn. — The City of Norwalk accelerated efforts in 2020 to plant trees and increase canopy coverage along neighborhood streets, in parks and at schools, according to Erica Kipp, chairperson of the Tree Advisory Committee.

The committee ordered a record number of trees in 2020 and oversaw planting of 73, Kipp and other committee members reported, as they met recently to review progress and discuss budgetary matters.

“Sometimes I don’t think we realize how impressive it actually is until we see it laid out like this,” Kipp said of City’s planting campaign. “This is something that, hopefully, we’ll be sharing with the community who, doesn’t really know a lot about what we do.”

There was a discrepancy towards the number of trees planted being 69 rather than 73. The committee said it was because of the difficulty in obtaining Redmond American Linden. According to Paul Sotnik, Senior Civil Engineer of the Engineering and Construction Division, the tree will be in short supply in Spring of 2020 and being unavailable until the Spring of 2021.

The solution the committee found was to replace the Redmond American Linden Trees with another species to maintain the count of 73 trees planted before the start of 2020. Kipp also said that there’s a list of preapproved trees to select as a replacement.

Chairperson Kipp emphasized the need of keeping strict accuracy between the trees that were planted verses trees that are planned.

The committee is specifically targeting streets where sidewalk and curb repair work have required removal of existing trees. Richard Whitehead, arborist and Vice Chair, said he loves that.

“A lot of times when those projects occur, there’s trees that need to be removed. And we’ve seen that [and] we’ve heard the public outcry,” Whitehead said, “We can show them that when the city undertakes projects like that, we’re on board with replanting those areas as part of the project.”

The committee ordered 56 trees in spring 2020. That was “the largest order we’d ever had in a Spring or Fall session, ever,” said Committee member Paul Sotnik, Deputy Tree Warden, senior engineer in the city’s Engineering and Construction Division. “And it is by a long shot, because the most we’ve had before was 35,” he said.

Still, committee members noted, the city and local environmental groups, working together, need to make much more progress in order to meet the longer-term goal of planting 250 trees yearly until the city’s 400th anniversary in 2051.

That goal was established in a 2018 report by the Western Connecticut Council of Governments that included an analysis of Norwalk’s tree canopy and the potential environmental, health, and economic benefits to the city and its residents of increasing and improving that canopy. The WestCOG study reported that Norwalk ranked 135th out of 169 municipalities for canopy coverage — with just 49.3 percent canopy cover versus the 64.5 percent statewide average. At the same time, Norwalk ranked 9th in impervious surface cover.

The WestCOG report highlighted potential financial incentives for improving Norwalk’s tree canopy. For example, removing toxins from the air could potentially save millions of dollars a year for Norwalk.

More trees and better canopy cover would boost property values, manage stormwater, and sequester carbon. The WestCOG report stated that the trees in Norwalk provide an estimated $36 million in benefits. Those benefits equates to $408.18 per resident annually.

The estimated $36 million is the current tree canopy.

The report noted that tree canopies contributes environmental, social and economic benefits. By contrast, impervious surfaces, such as sidewalks, paved road and roofs, absorb sunlight and build heat that can contribute to environmental warming.

By partnering with homeowners and private investors, and environmental and civic groups, the Tree Advisory Committee said it hopes to plant 250 trees annually — or 16,500 more trees over 33 years, according to WestCOG’s calculations.

One of this year’s plantings took place during the annual Arbor Day activities of the Norwalk Tree Alliance, a civic group that sometimes partners with the Tree Advisory Committee. Kipp said that everyone involved did the best they could despite the pandemic.

Each year, the Norwalk Tree Alliance and the Norwalk Board of Education jointly select a school to receive a tree, in a ceremony attended by students, town residents, and local officials. This year, Norwalk Community College was chosen.

The Tree Alliance’s mission, according to its website, is to protect Norwalk’s tree canopy and planting new trees while educating the public.

The WestCOG analysis said that the tree planting program averages $770.42 per tree. It said that the average per year that the Committee plants is 61 trees; the total cost per year for trees is $46,918.85. The estimated number of trees they calculated would be 16,500 trees over 33 years. This would increase Norwalk canopy coverage up to 61.5 percent.

The Tree Advisory Committee also discussed their remaining budget and whether to request increased funds for 2021. It had carryover funding of $2,313.73 from the previous 2019 fiscal year according to Paul Sotnik, Senior Civil Engineer of the Engineering and Construction Division. Before the carryover, the committee had $20,518 where $18,204.27 was spent on 17 trees.

The president of the Norwalk Tree Alliance, Allan Broadbent, also attended the Nov. 24 meeting to discuss his organization’s 2020 activities and future plans.

Broadbent told the committee his organization planted 15 trees in 2020 and that other groups are also planting trees but not in a coordinated manner. He also said that if his group, Norwalk River Valley Trail, Norwalk Land Trust, and other civic and environmental organizations collaborated by sharing tree-planting data, the overall community would benefit from a unified effort.

“We’re all [planting trees], yet we don’t see it as a holistic effort–as the city as a whole right working on all these trees,” Broadbent said. “Wouldn’t it be neat to have a tracking or some sort of database where we can track all of the trees that get planted and all of the organizations listed of who’s done them?”

The plan is so needed and going to be very helpful going forward. I urge the committee to also track the number of trees that are removed each year; and to champion an ordinance that puts tree removal on the defensive: the reason for removal must be identified and approved before any tree is cut down. We all know new trees are incredibly necessary but they don’t replace the older trees removed on a one-to-one exchange in environmental (or esthetic) terms.

Eversource is currently threatening me with cutting down, instead of trimming, eight maple trees that have grown along the banks of Keeler Brook on my property. They have been there 30 years. They have an 80 year old easement. Written long before global warming. I am devastated. I am not the only one they have done this to-recently.

love to have a tree

Those Development of several Large Homes on Chestnut Hill Rd. and East Rocks Rd. destroyed a large of mature trees and undergrowth…..

Of course this initiative seems to have started by cutting down the trees on the formerly tree lined sidewalk that runs straight into city hall. You can not make this stuff up.