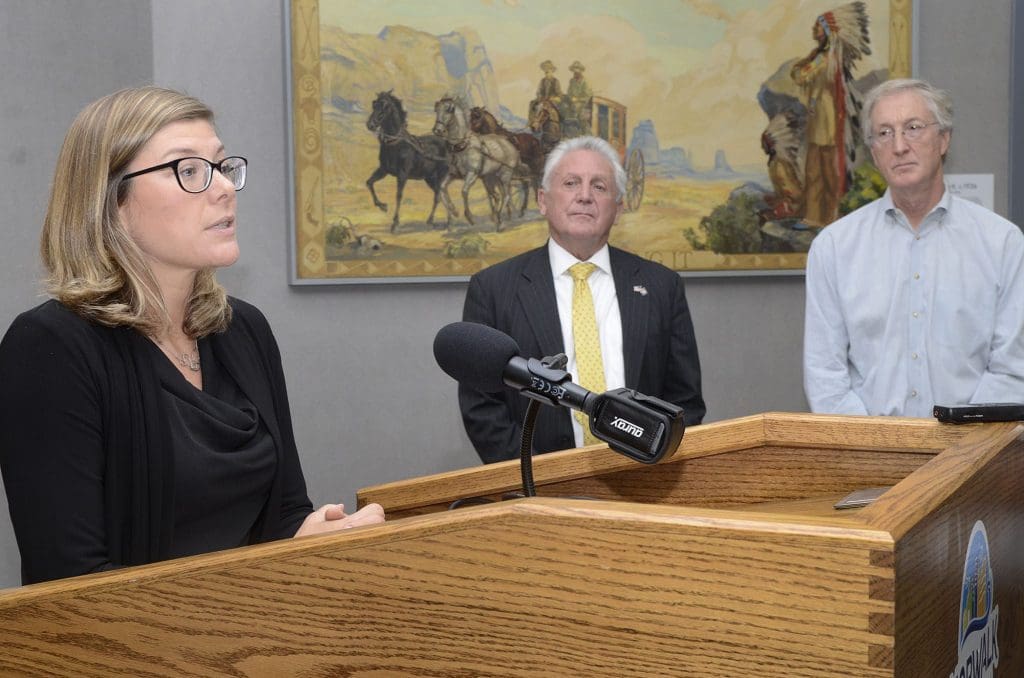 The Small Business and Main Street Program has been in the works for six months and was made possible by Mayor Harry Rilling’s reorganization of top City administrative positions, Norwalk Chief of Economic and Community Development Jessica Casey said at a press conference. “For the first time in a long time, we’re at City Hall able to really put together the budgets of different teams and the resources from different teams in a way that we haven’t been able to do before.”

The program will have four elements:

Matching grants up to $10,000 will help fund seating, signage, lighting, planters and window and door replacements, improvements that will help drive residents and visitors to the neighborhoods, she said. The Redevelopment Agency has a façade program but that’s for historic buildings and this is city-wide.

Guidelines will be on the City’s website on Dec. 1 and the program will begin Jan. 1.

The $50,000 investment in Wall Street will support benches, planters, lighting and banners to identify the neighborhood, Casey said.

“Again, the objective here is to really create a street that people are inclined to visit,” she said. “We want to bring vitality to the area, we want people to be able to spend time in the area and be able to dine on the sidewalk and be able to make the most of the neighborhood.”

The Wall Street Neighborhood Association has helped identify those needs but other businesses also said the same things, she said.

“We’ve given other neighborhoods some investment, we want to focus on this area as the next up and coming area for Norwalk,” Casey said.

“We want to make sure that everyone who is living in Norwalk has an opportunity to access the amenities that they need, and that they have the ability to be present on the street and spend time on the street, whether that be eating or walking from store to store,” Casey said. “So that is what these programs are geared for.” 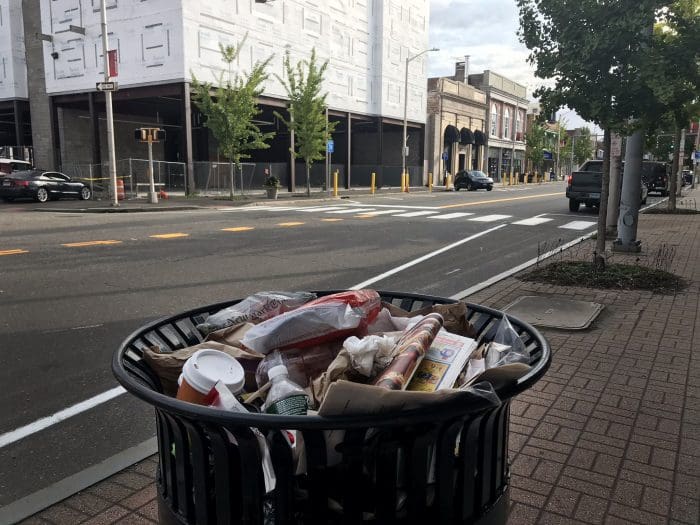 A Wall Street trash can, in September.

“The fourth program is something that we’ve heard a lot about from not only Wall Street, but also the South Norwalk area, and that is the need for trash receptacles that are a lot more effective and a lot more efficient,” Casey said.

Garbage and trash blows out of the current receptacles but the City will be issuing an RFP (requests for proposals) for 12 big belly compactors, to be installed on Wall Street and Washington Street.

The City is planning an economic development tour and other outreaches to small businesses, she said.

“These are things that have been spoken about over the years since I’ve been on the Council, a lot of different things,” Common Council President Tom Livingston (D-District E) said. “And I really give credit to just kind of team for bringing together various groups and organizations within city hall to put together this program.”

Casey’s been working on this since she began work 10 months ago, Livingston said.

“I know some people may accuse us of announcing this right before the election, but I know they’ve been in the works for a long time,” Livingston said. “Anything we as a city can do to support small businesses is a big plus, as far as I’m concerned.”

Casey said her outreach to the businesses is in addition to the three years of input into the Plan of Conservation and Development, as everything in the program was cross-referenced with the POCD to make sure it was in alignment.

Rilling said Casey was hired after the reorg formed a new Economic and Community Development Department “because of her expertise, or experience and her background for all the achievements that she’s had in her career.”

A press release explained that the new department “includes Business Development and Tourism, Neighborhood Improvement and Code Enforcement, Planning and Zoning, and Transportation, Mobility, and Parking. These departments coordinate with each other, and other city departments, on funding, resources, and timelines related to projects, initiatives and day-to-day operations, establishing a more effective and efficient local government structure for residents and businesses in Norwalk.”

Helping small business start-ups in Norwalkk has been one of Lisa Brinton’s rallying cries in her run for Mayor. This initiative is a start, but Mayor-for-6-years-already-Rilling is leading from behind here. Rilling’s timing for this announcement, 5 days before voting, is pure politics.

Looking forward to those improvements.

I hope the implementation comes soon and runs smoothly.

To put this amount in perspective, not including fire and safety, it costs about this much to run the city for one hour.

this is the think about running, see the competition steels your ideas

should be an election every year,thats the only time anything gets done. Harry where have you been for the past two years. election looms and you finally do things that should have been done for the past 6 years.
VOTE LISA !!!!!

You have to hand it to Lisa Brinton. She is not even mayor yet, and she is already getting stuff done. Talking about working across the aisle! Well done…