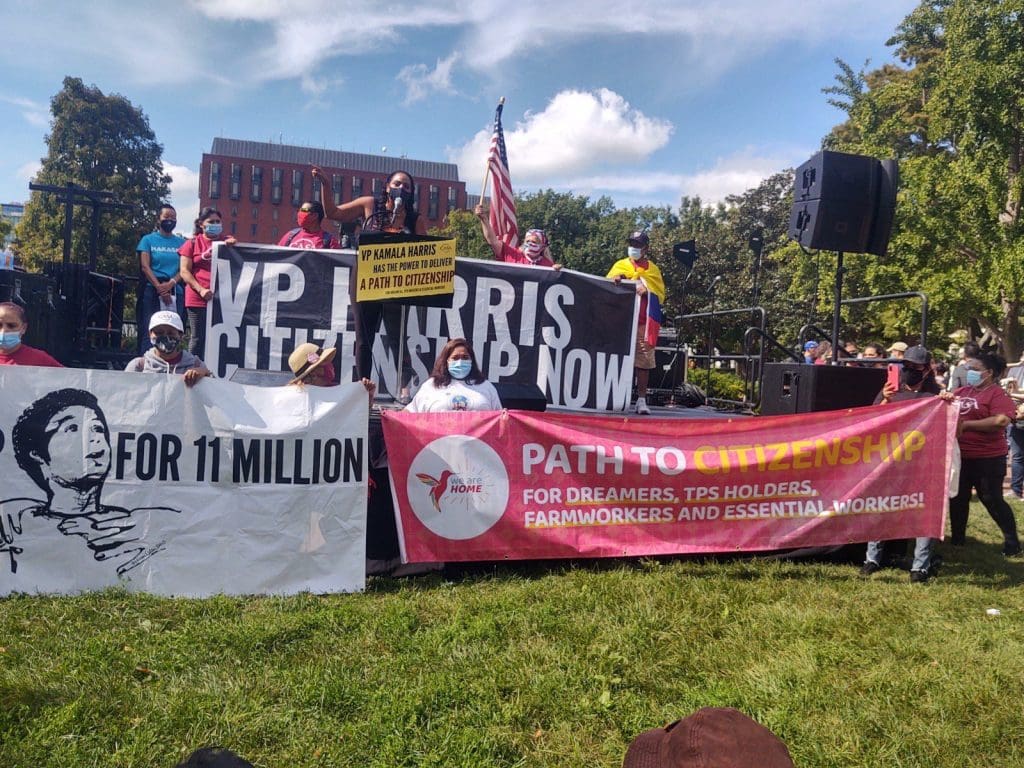 NORWALK — A local grassroots organization from Norwalk, Communities Without Borders: CT, took its call for immigration reform to Washington D.C. earlier this month.

The group traveled to join more than 500 people from across the United States who were there as a part of the We Are Home coalition that is seeking to “win a pathway to citizenship for 11 million undocumented people and a fair, humane, and functional immigration system.”

The goal was to persuade members of Congress to include immigration reform in the reconciliation bill being negotiated by both the Senate and House of Representatives. The Senate Parliamentarian ruled last month that immigration reform couldn’t be included in the budget reconciliation bill. The group said that it wanted to try and convince their elected officials to find a different way to include it or take a different route to comprehensive reform.

“We went to meet with our representatives to ask for a path to citizenship,” said Carmen Lanche, the founder of Communities Without Borders: CT in Norwalk.

Lanche said that they met with both of Connecticut’s Senators as well as all five U.S. House of Representative members, and participated in protests and vigils over about three to four days in D.C.

“[On the] last day, there was a march and a protest right in front of the White House, and it was formed by over 500 people, activists, religious leaders,” she said. “And there was a civil disobedience protest where 51 individuals were arrested, signifying the 51 votes needed from the Senate to pass a path to citizenship.” 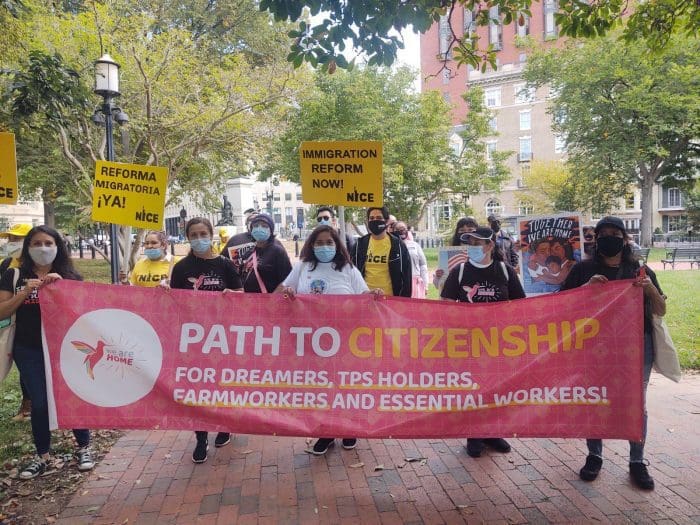 Earlier in the week, 51 members of the group held a silent protest through shaving their heads to represent the 51 votes needed in the Senate to pass immigration reform as a part of the reconciliation process.

“It was very, very powerful for these individuals to shave and lose a part of themselves to show how much they need this path to citizenship and this immigration reform to happen,” Lanche said.

The efforts, she said, were an attempt to put pressure on members of Congress to show them that they “can’t just use immigrants for political gain.”

“Once they’re in power, they forget about our needs and what they promised,” Lanche said.

Lanche cited the fact that the last time there had been any effort to reform the immigration system was more than 20 years ago under President Bill Clinton, and before that in the mid-1980s under President Ronald Reagan.

“Since that, nothing has been done to help all these families that are here working to better the country,” she said.

She cited passing comprehensive immigration reform, supporting the DREAM Act that passed the House of Representatives, and working to address the crisis at the border as areas she would like to see Congress take action on.

Lanche said that the effort held even more weight this year due to the impact of the COVID-19 pandemic on immigrant and undocumented communities.

“This was also a way to raise our voices and let them know that a lot of undocumented immigrants are part of the essential workforce in this country,” she said. “They were part of the frontline workers during the pandemic to keep families safe, to keep food on the table – and do all the essential work that needed to be completed as well. We’re part of every part of society that keeps this country running.”

Communities Without Borders: CT, which formed in late 2019, focuses on immigrant rights in the Fairfield County area and provides resources, seminars, and educational services related to immigration issues.

Lanche said that now that they’re back in Norwalk they’re going to continue to ask their elected officials to be “more vocal and ask their colleagues to also support this path to citizenship.”

“We work with immigrants from all over the world, not just Latinos,” she said. “And we do help a lot of undocumented immigrants to raise their voices and make their voices more powerful, but we do not close the doors to anybody that may seek assistance from our group.” 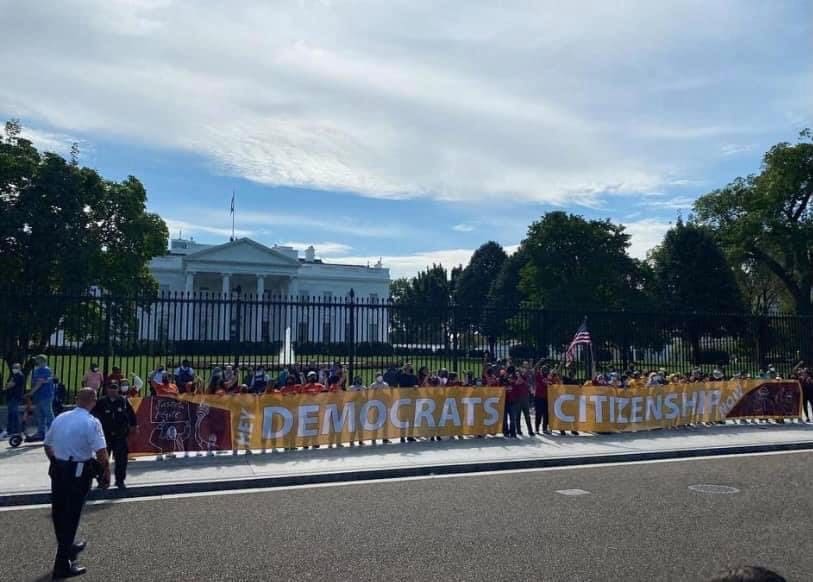 Stop with the 11mm number. According to a Yale/MIT stiudy it’s twice that

around for years. At the center lies a fairly stable and largely unquestioned number: 11.3 million undocumented immigrants residing in the U.S. But a paper by three Yale-affiliated researchers suggests all the perceptions and arguments based on that number may have a faulty foundation; the actual population of undocumented immigrants residing in the country is much larger than that, perhaps twice as high, and has been underestimated for decades.

Using mathematical modeling on a range of demographic and immigration operations data, the researchers estimate there are 22.1 million undocumented immigrants in the United States.

There is a cost to everything.

Hmmmm, 10 million undocumented immigrants in this country, and companies all over the country complain they can’t find enough people to work. If only there was a way to….naaah, never mind.

DryAsABone, I hardly think the NY Post is an accurate source of unbiased intel. With many friends who are teachers or parents in NYC, none have reported the “flood” of undocumented students The Post reports.

JustaTaxPayer, the 11 million number is undocumented who need help and a path to citizenship immediately. I have no doubt there are at least another 5 million undocumented Irish Grandmas who “accidentally” overstayed their visa and make up part of the 20 Million number you quote. I say this as a woman with lots of close family still in Ireland. I still believe the urgent focus should be on the 11 million undocumented residents who are most vulnerable, need income, identity documents, stability, and safety as soon as possible.

ML– You are generally correct. The Post has a bias like most papers. In this state, many people question the motives of something like The Yankee Institute but the numbers do not lie.
Shooting the messenger might work for you but the message remains the same.
As for the numbers of illegals? Nobody will ever know because they can’t be counted. Guesstimates is all we get but I would suggest that you head down to the border to see for yourself. And while you are at it, deny the amount of drugs pouring into this country from all over the globe.
Open borders do not work. Trump played to his faithful and decades of no policy/action by our central government helped him win his election. A path to all those who wish to come to this country is important. A super highway with a constant flow of illegals, from all over the globe, is not sustainable and is unfair to those who have waited in line.

Look, there are laws and penalties when anyone enters the United States illegally. So you expect the legal system to just ignore the laws and then grant them legal status by breaking a laws? Next time someone breaks into your home, stays there, is eating your food, wearing your clothes, working your job taking your money saved then tell me this is fine by you.

We are being invaded at the southern boarder and that’s fact. Some maybe people we really don’t want such as violent criminals, terrorists, etc. This must stop!

Want to come in? Go though the process my friends and his family went through. No problems there, but to just rush in, ignore our countries boarder laws and demand some level of citizenship is just crazy.

This is separate of those who came in as young children with parents the so called “DREAMERS”. That is a different issue and shall be debated later.

Now, to add insult the PINO Biden now want to settle a lawsuit and give each illegal alien $450K per person. Do you know that’s more than a family member recieves from the government when the member of that family is KIA? More than 9/11 families received?

We are a country with boarders and everyone must understand we have every right to enforce the boarder, enforce our laws as a nation.

So now what? Just allow this to continue? No penalties? Just allow however many people of whatever nationality just stay?

We even reward them by allowing money earned to be sent back to their countries without penalty. How was it earned? Lost tax revenue that we must compensate for? Imagine if they were taxed at the same rate we are? Do you think taxes would need to be increased? Hell, PINO Biden keeps asking the wealthy to “pay their fare share” (The top earners pay 40% as it is) so why are illegal aliens not paying “their fare share”? Not all have those so called SS or workers number to claim earnings.

There must be penalties first and foremost. Penalties to also discourage future invaders into the country.

Look, you broke the law, there’s no debating this so it’s time to stop coddling and start with the penalties or in some cases deportation until you understand to obey our sovereignty and laws.

Once you do, welcome to the United States of America.

Good for you CT Pat
People who come into the USA should not be put in the same category as legal immigrants. Maybe we should enforce the laws!
Like many past president’s tried to do including Bill Clinton and other democrats. But did not get the support they needed.
Oh I voted today and showed Photo ID!!

Just to be clear, my comments do NOT discuss what are known or called as “DREAMERS” which in itself is a whole new debate on how to grant some level of citizenship. Not sure what the outcome will be, but that debate is long overdue.

As for showing an ID to vote. Seems only logical in today’s society. No big deal and it never is a method of “voter suppression” as some may think.

You must show a vaccine document in some cities just to survive obtaing food. I find that totally illogical.

Allowing people who no one dragged over the boarder and did cross into the United States on their own free will to thwart capture by US Border patrol some level of citizenship is maddening. They chose to break into a country. Now, they must face the consequences.

It may come down to a panel to discuss a person’s contribution to society in some fashion and grade them on that matter what the consequences will be. Who knows?