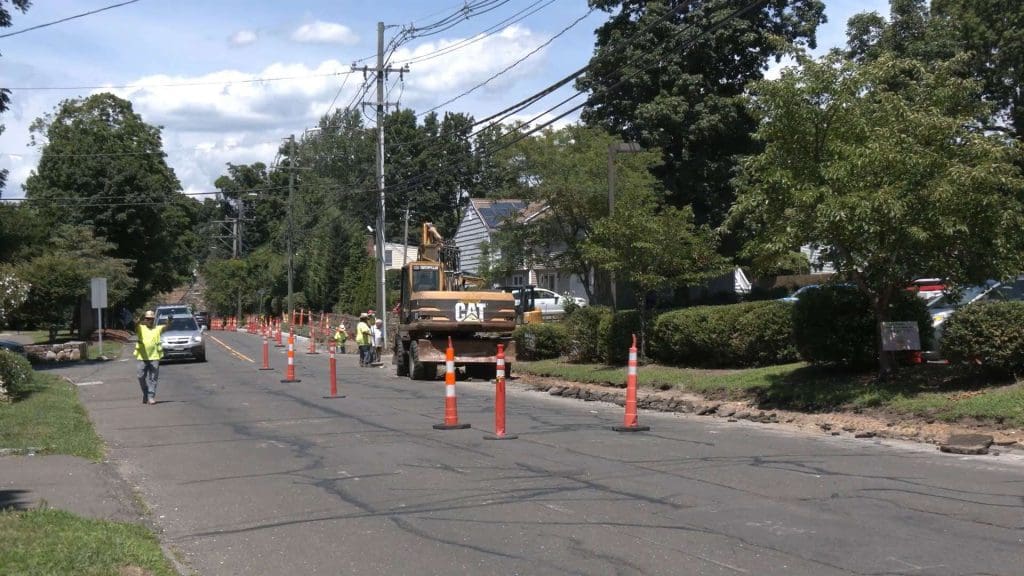 The Norwalk taxpayer-funded work between Flax Hill Road and Charcoal Road will connect Brien McMahon High School, Brookside Elementary and Roton Middle School but will also benefit “every neighbor that lives on this street,” Director of Transportation, Mobility, and Parking James Travers said Wednesday during a ceremonial groundbreaking at BMHS.

“This is a very, very important project,” Mayor Harry Rilling said. “These sidewalks will be ADA (American Disabilities Act) compliant, making sure that young people have a safe route to school and that’s the whole idea behind this. The road will be fixed as well.”

It’s about $800,000 of work funded through the capital budget process, meaning funded through issuing municipal bonds. A. Vitti Construction was awarded the contract to install about 4,100 feet of sidewalks, total, on both sides of the street.

“When we were campaigning, people constantly remarked about how was in need of work, how the sidewalks were in disrepair,” Common Council President Tom Livingston (D-District E) said. “And when you go down the road a little bit, you see that a similar project was done a few years ago, putting in new sidewalks for Rowayton (Elementary). This is the natural extension of that.”

When the sidewalks are done, the road will be paved and bike lanes will be striped in, said Director of Transportation, Mobility, and Parking James Travers.

“We’re also, in much of this project, going to be able to get a three-foot buffer in between the curb and where the sidewalk starts to just get the pedestrian a little further away from the street, making them feel more comfortable,” he said. “And as we expand those, they’re a great home for street trees.”

Concrete curbing will line the roads but the sidewalks will be asphalt, with concrete pads at the intersections for ADA compliance, Travers said.

As is the City’s policy, once the sidewalks are complete it will be the adjacent private property owners’ responsibility to maintain and repair them.

It’s hoped that the work will be done before school reopens but, “even if we are not able to fully complete the project… we will have completed the critical component, right by the school,” Travers said.

“The quality of life in any community depends on the infrastructure, and walkability, the drivability, people being able to get around,” Rilling said. “One of the things I like about this program… there’s going to be a buffer, so that the children will be much more protected from the roadway than they are now. It’s a priority of my administration to fix up sidewalks, roads, do whatever we can to make our city safer so that people can feel comfortable, especially young people who go to school by foot.”

Re: Livingston: Some improvements were made near Rowayton school. But there are still a lot of pathways/ways kids walk to school with no crosswalks and no sidewalks. The state just did a major repave of Route 136 on McKinley adjacent to the school/fields and somehow, in a village area plus near school, no sidewalk added? (Cars tend to speed here as well). Perhaps more communication between local officials and the relevant state departments needed? Also there is a major division of neighborhoods/lack of clear safe places to cross on Witch Lane; someone needs to make the call about where kids and pedestrians can safely walk along Witch & cross Witch Lane. Several crossing spots are needed. Refusing to commit and invest in creating safer walking spaces doesn’t make things safer by discouraging walking. Kids and people will still walk, but it is currently quite dangerous with blind spots, speeding cars, and kids darting across the road.

To further complicate the picture, private home owners are more frequently trying to obstruct cut through safe passage ways that may cross or border their property lines. The town should designate, recognize, and protect some of these more commonly used pathways.

It has been well over 5 years since I communicated with
Michael M. Yeosock, Assistant Principal Engineer
Norwalk, CT Department of Public Works about Witch Lane crosswalks and nothing was done. When I met with him he said someone just needs to tell them where crosswalks are needed, because paint is cheap. He also told me that I shouldn’t worry so much about my kids walking to middle school without sidewalks because “it’s only going to be a few years”! (Unfortunately I have 4 kids x 3 years = 12 years, plus I actually care about other children in the community). Roton crossing is much improved, and still needs its crossing guard. However I think it’s important for us to be cognizant of some of the attitudes, beliefs and politics that impact these projects. And I’m only touching on the tip of the iceberg.

PS. I’m sure there are many other Norwalk neighborhoods that have similar issues. They all deserve to be heard and attended to. I speak of what I know in my own area as an example.

This is a great project. Better sidewalks are sorely needed in so many areas of Norwalk, especially around schools. Hopefully we will see many more projects like this. The upcoming sidewalk audit should help clarify where the next priorities should lie.

Only critique is I wish we could have seen protected bike lanes installed here. Most parents will justifiably not want their children riding to school, even with painted bike lanes. Without physical protection, the risk of a crash is ever present. I’m not familiar with typical speeds on this street, but in the absence of protection, there should at least be traffic calming to reduce practical driving speeds to around 15 mph.

Will West Rocks road ever get repaved ? Or do we need wait just before Nov elections ?
It’s one of the City’s most heavily trafficked roads leading the very busy Walmart shopping center.

Every time I read about our City putting in sidewalks I wonder why we’ve never put a firehouse in the northern part of our City so we don’t need depend upon Wilton. Or why we don’t have sewers or City water or garbage pick up. I suppose we’re just not important enough. Maybe our taxes ought be raised. If $10k doesn’t cut the mustard maybe City Hall can try $20k.