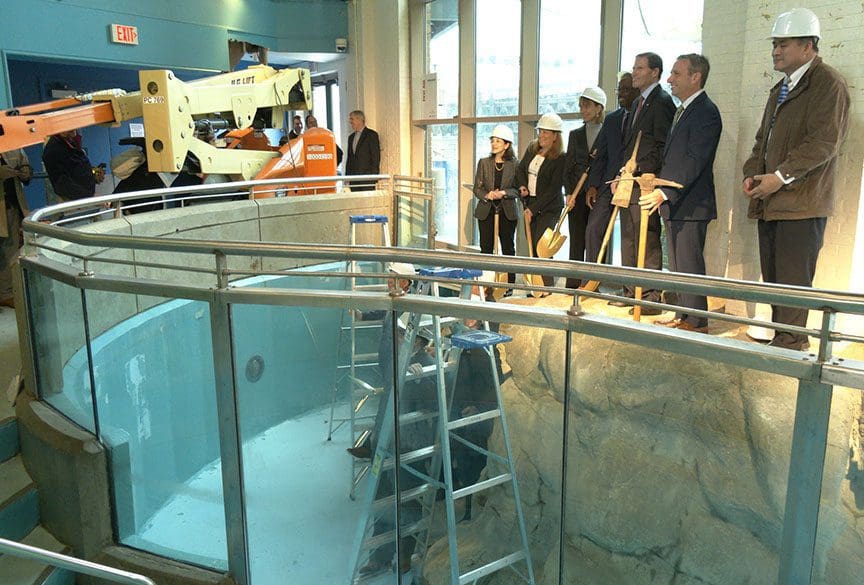 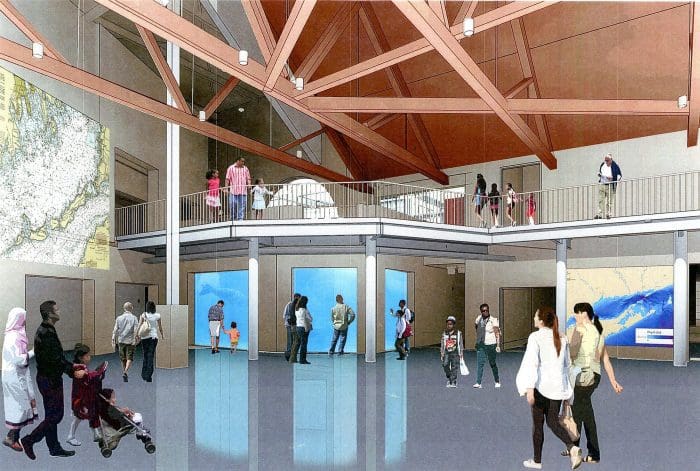 An artist’s rendering of the planned 150,000 gallon seal tank.

NORWALK, Conn. — Work is underway on a new 4-D theater for the Maritime Aquarium, and on a new home for the aquarium’s seals.

Life has already improved for the seals as they have moved into a 30,000-gallon temporary home, much larger than the 19,000-gallon tank they’ve occupied, built in 1988.

The changes are due to the expected reconstruction of the aged railroad bridge next to the aquarium, the Walk Bridge. It’s thought that the new theater and seal tank will be open in late 2020.

“We are looking at a triple win here,” Maritime Aquarium President and CEO Jason Patlis said Monday at a groundbreaking ceremony. “A win for our seals which will have much greater space, a win for our visitors who will have the experience of a 4-D theater and much greater opportunity to see us seals and a win for the Maritime Aquarium because it gives us momentum and positions us to fulfill the potential that we all know we have.”

Why this is being done

It first became public knowledge in early 2016 that the Connecticut Department of Transportation (ConnDOT) was considering demolishing the Maritime Aquarium’s IMAX Theater to create construction space for the reconstruction of the Walk Bridge.

An artist’s rendering of the planned 4-D Theater alongside the Maritime Aquarium’s entrance.

Thousands of commuters were inconvenienced in 2014 when the 123-year-old Walk Bridge failed twice.

“Many people may not realize that, every time a bridge on the Northeast Corridor or there’s a disruption on the northeast corridor for Amtrak, that’s $100 million hit per day to our regional economy,” State Senate Majority Leader Bob Duff (D-25) said at the groundbreaking ceremony.

“The multi-year replacement of the bridge, expected to begin in 2021, requires removal of the Aquarium ‘s iconic IMAX Theater and a riverfront structure that is home to the ” Meerkats” exhibit and the seals in their temporary space.

“Aquarium leaders negotiated with state and federal officials in 2018 for a ‘functional replacement’ agreement to build a new theater and fortify elements of the Aquarium to be impacted during the bridge work. Capped at $40 million, the agreement involves federal and state dollars. No money will come from the City of Norwalk.”

“We are going to replace the IMAX theater which is at the south end the aquarium with a modern, up to date state of the art 4D theater at the north end of the aquarium, as well as a number of other improvements including enlarged housing, meaning underwater housing for our seals and a series of other projects,” Maritime Aquarium Board of Trustees Chairman Clay Fowler said at the groundbreaking ceremony.

“These are the first changes to the seal exhibit since The Maritime Aquarium opened in 1988, and the result will make it the Aquarium ‘s largest exhibit. The new seal exhibit will reach up to the original exhibit’s balcony level and be fully enclosed by a new exterior wall,” the press release said.

An artist’s rendering of Newman’s Own Hall.

The tank will be larger than the Aquarium’s “Ocean Beyond the Sound” exhibit.

“Barrett Christie, director of Animal Husbandry, said the larger, deeper, enclosed exhibit will help to protect the seals from noise and vibration of the Walk Bridge work. Its design is based on behavioral animal studies and on recommendations from other member institutions of the Association of Zoos & Aquariums,” the release said.

“A year from now when our new exhibit opens, they’re going to have 150,000 gallons in which to frolic and swim and enjoy themselves and that is a seven times increase in the space of that home, which is really remarkable,” Patlis said Monday.

The walls went up Nov. 13 around the Aquarium ‘s employee parking lot, where the theater will be built, the press release said.

An artist’s rendering of the planned 4-D Theater interior.

“In addition to the new home for a harbor seals, we’re going to have a new 179-seat state of the art 4-D theater which will be opening up and featuring movies about our marine environment, our marine world, where literally you will be able to be touched, and all four senses will be on display,” Patlis said Monday. “We go to movies and we experience sight and sound add two more dimensions, and you’re going to get touch and smell, and in case you’re wondering what the four ds are, those are the four Ds.”

“The 4D Theater will be built in conjunction with SimEx-lwerks Entertainment, which will provide 3D digital projection, proprietary 4D sensory seats and other in-theater special effects, as well as a selection of educational and seasonal films. The new theater will be multipurpose, capable of 2D and 3D digital screenings, and have a stage for lectures and other presentations,” the press release said.

“It will give us a versatility that we have not had yet. And so, think ocean movie festivals, think lectures and presentations on our maritime heritage right here in Norwalk and around the world,” Patlis said.

The existing IMAX theater is planned to be in operation through December 2020.

Duff called the work a “game changer” for the aquarium.

“We all know that the Maritime Aquarium is the top tourist attraction in all of New England. And it’s a top 25 I believe, number 22 in the country,” Mayor Harry Rilling said. “I think with this renovation of the new theater and the new exhibits, we’re on a fast track to the top. This is going to be a number one aquarium in all of the classes. Because of the interactive opportunities, the educational opportunities, all the things that are experiential learning for our young people, to realize that we have to protect Mother Earth, if Mother Earth is going to serve us for many, many years to come.”

Has anyone ever seen where the “$100M / day hit to our regional economy” is from and calculated? Seems like a nonsense number as if 125,000 ppl use the Walk bridge daily, that is $800 per person.

But think in many cases people would work from home or drive. I actually would save money on the ticket and work 2 more hours a day probably if I didn’t have to take the train into the city and worked from home so would gain productivity. 🙂