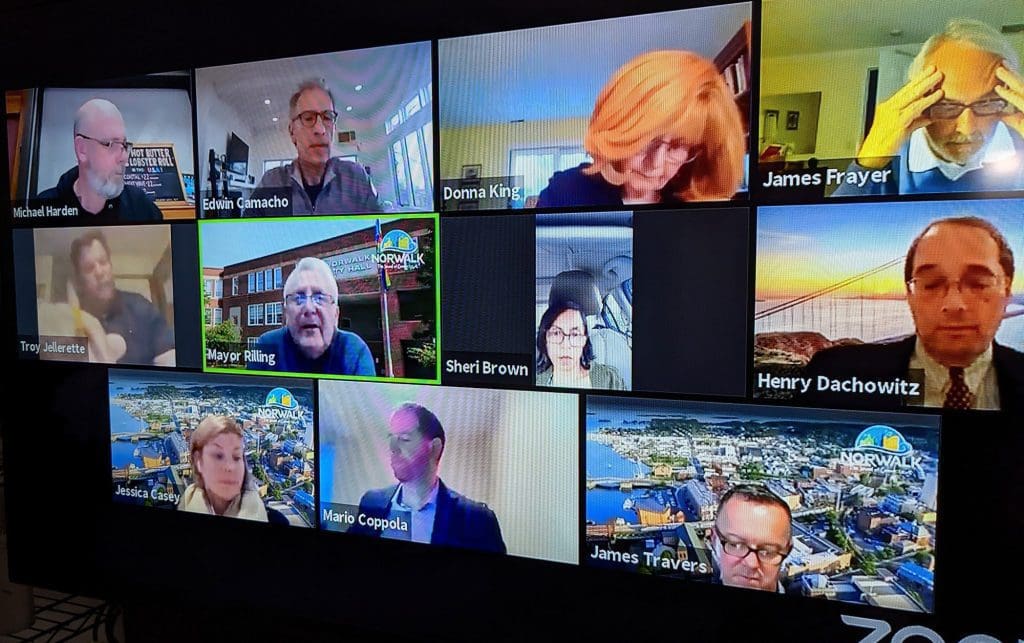 NORWALK, Conn. — You appear to be set for virtually no increase in your Norwalk property taxes this year, courtesy of the American Rescue Plan.

The Board of Estimate and Taxation voted unanimously Monday to approve a 2021-22 tentative operating budget that carries no increase in the mill rate, factoring in $12.9 million of American Rescue Plan funding. It offers no increase for the Board of Education – so that’s a 0% increase instead of the 2.6% increase that drew Board member protests – but Norwalk Chief Financial Officer Henry Dachowitz and Mayor Harry Rilling said they expect American Rescue Plan dollars to give Norwalk Public Schools the funding it needs.

The BoE will use the federal money from the $1.9 trillion American Rescue Plan to “somehow compensate for the increase that they are anticipating,” Dachowitz said.

School officials were not present.

It appears that NPS will be getting $27.5 million from the American Rescue Plan, divided over two years, Dachowitz said. The City had planned to allocate a $4 million increase to the schools and now is planning to keep the funding flat.

The federal money comes with restrictions.

The American Rescue Plan money is also cancelling the plan for a $8 million drawdown from the general fund balance, or Rainy Day Fund.

“We also felt that, again, the (ARP) funds should be used for the greatest good,” Rilling said. “And probably the easiest way to accommodate that greatest good across businesses, residents, is to come in at a zero-tax increase, rather than seeing people have to pay more. Some people have lost their employment. Landlords are not able to collect rent in many cases, businesses have seen a decline in their revenue. There’s a lot of different things that are impacting not only the city of Norwalk, but Fairfield County, Connecticut, and indeed the entire nation.”

‘According to our reading and understanding of the legislation, we are allowed to come in at a flat tax. We are not allowed to use those funds to reduce taxes from what they were last year,” Dachowitz said.

BET member Sheri Brown asks about the parents’ fears that NPS would have to cut services without additional funding.

Spending decisions are made by the Board of Education, Dachowitz said.

“We set a budget. They have other funds, whether it’s grants, whether it’s from the American rescue plan, and they decide how to allocate their dollars,” Dachowitz said. “So if cut programs or lay off teachers, that’s their choice. But as Mayor Rilling has pointed out, the American Rescue Plan, which has restrictions, specifically said that these funds are designed to avoid layoffs. So we don’t have any say in how they allocate their dollars. But we would hope that they use those funds in a way that benefits all the school children and addresses some of those concerns of the parents.”

He mentioned the fear articulated by Hamilton lately, a “cliff” in funding.

“I would say (Hamilton) understands what the goal was that we’re trying to keep the taxes flat for the citizens. …. His concern is that in two years time, the amount of increase will be a multiple of what it might be this year,” Dachowitz said.

The efficiency audit will hopefully result in “recommendations to both the Board of Education and the City on ways to spend funds more efficiently, to save money, to get greater efficiencies,” Dachowitz said. “So we’re hoping that that might help offset some of the gaps that we end up with.”

Keeping the Board of Education at the $208 million in funding it received for 2020-21 eliminates any issue with the minimum budget requirement, the State law that doesn’t allow a municipality to cut education spending, he said.

“I also think the general public would expect not only the City, but the Board of Education, to use the funds in a manner that is going to reduce costs yet still fund all the services that we need,” Rilling said. “I think not to do that would be sending the wrong message to the public. It’s an opportunity for us to keep the budget flat. And we’re trying to take that road.”

Board of Estimate and Taxation Chairman Ed Camacho also expressed hope that the efficiency study will help lesson the effects of the cliff.

“We’ve talked about taking an incremental approach to that,” Rilling said. “And I think that’s how we can all work together to make sure that we don’t all of a sudden fall off that huge cliff, that we do have a method in place that we can gradually increase to get them to where they need to be in year three.”

Meanwhile full steam ahead on a $300 million building we didn’t need that will cost $ millions extra to staff, but we can’t fund current operations. Besides the idiotic move to shut down the water safety course at the beach, while spending $ millions on the NHS pool that is going to be bulldozed, I can’t think of two more shingling examples of how dysfunctional this current government is.

The city is going to receive over 40 million in Federal funds, better than 10% of the Cities annual budget, and we are supposed to applaud the BET for “no tax increase”?????

This is either election year spin, or a late arrival to the “April Fools” copy.

While NPS will receive a hefty sum of federal dollars, there are very clear guidelines on what the money can and cannot be used to cover. In addition to the normal maintenance of effort requirements, there is also a maintenance of equity provision. In conversations I’m having with national funding experts, the recommendation is that districts set a policy to spend 40% first year, 30%, 20% and then 10% to pace spending and mitigate the cliff that is going to hit all districts across the country (the cliff which was coming BEFORE the pandemic as well). Limiting NPS’ funds now will make this financial cliff so much worse and absolutely will force staff and programmatic cuts. While this is an opportunity to rethink how we do school more effectively and efficiently, and what a “new normal” should look like to better serve students, the gravity of what schools need to do to make up for the learning loss and the disproportionate impact on so many of our students here in Norwalk is monumental. A 0% increase will make this learning recovery and basic operations so much more challenging. Working in education policy, and as a former board of education member, I’ve always believed that our budgets are moral documents, so what does this say about our morals and priorities as a community?

@Julie, it says the mayor has figured out he can get re-elected without support school parents and is instead pandering to those who think a lousy school system helps their property values. If he had any morals or conviction other than self preservation, I would give him some credit. But the facts are plain and simple for everyone to see. He and Duff have proudly made us a sanctuary city as a matter of political virtue signaling, our school population has grown 10%, mostly high needs as a result and they don’t want to pay for it. Cynical and disgusting, but we keep reliably voting for it.