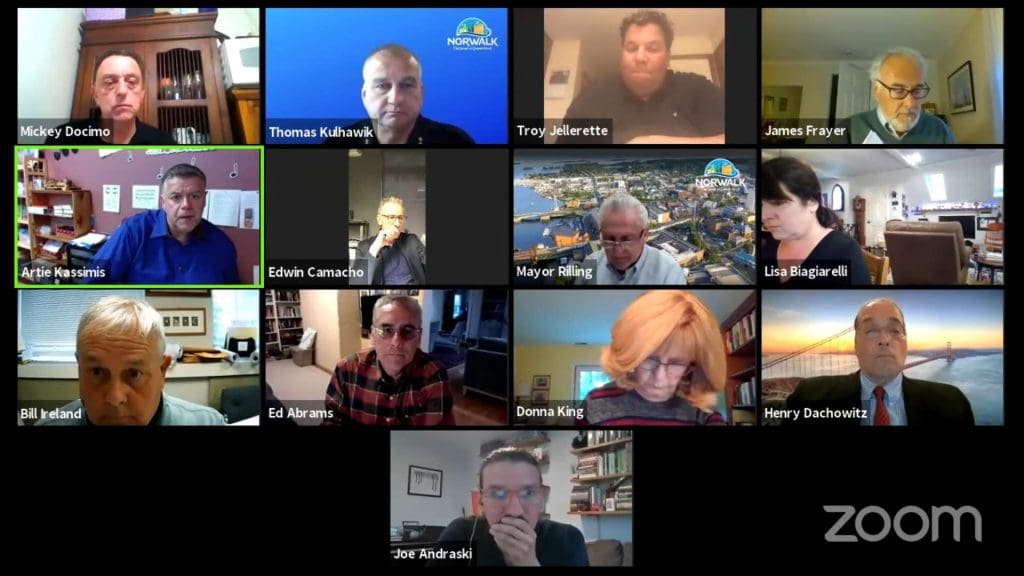 NORWALK, Conn. — The Norwalk Board of Estimate and Taxation on Monday greenlighted budget transfers to:

‘Unprecedented amount of permits coming in’

“From a Planning and Zoning standpoint, we are experiencing such a high number of permits that are coming in. We’ve actually have a little bit of a backlog and we’ve been monitoring that for a number of weeks. And that backlog continues to increase,” Norwalk Chief of Economic and Community Development Jessica Vonashek, formerly Jessica Casey, said to the BET.

“With an unprecedented number of permit applications being submitted each month, we have managed to process requests in a timely manner, including the administration and the inspections,” Ireland wrote in a memo. “This has been achieved by staff working additional hours during weeks where we have seen a larger number of permit requests come through.”

“What we’ve been doing to date is asking people to take additional permits home with them either in the evenings or on the weekends or being able to stay a couple extra hours in the office to be able to process those,” Casey said.

P&Z staff have many demands on their time, with Zoom meetings to run and “the heavy permit volume we’re experiencing,” Kleppin wrote. “We are currently receiving approximately fifteen (15) new zoning permits per day.  While we have been able to maintain increase staffing, we have experienced a knowledge gap that presented some short-term challenges as new staff got brought up to speed.”

Former Senior Planner Dori Wilson “has assisted in processing some complex development applications and has continued to help us in our required reporting of Workforce Housing applications,” Kleppin wrote. “We have used former staff sparingly and I anticipate this this to dwindle to little or no assistance over time.”

It’s also been difficult for staff to keep up with data entry and filing due to the high permit volume of permits and requests for information, Kleppin wrote. A temporary administrative assistant can help “for the remainder of the fiscal year.”

“I think that what’s interesting here is that we are seeing an unprecedented amount of permits come in,” Casey said. “So I think people who have been home for the last year have been deciding to do a little bit of additional work to their homes this summer. And we continue to see a large amount of development happening as well. But we know that what goes through Planning and Zoning will eventually go through building and code as well.”

Keegan functioned as both interim director for two years and a field inspector. A replacement director is “actively being recruited and there are five candidates, Norwalk Chief of Social Services Lamond Daniels said Monday.

In the meantime, “it is critical that the continuity and the services continue, as you know, you know, we still have the eviction moratorium,” he said. “And unfortunately, there are tenants who are still in various situations where the landlord attempts to raise the rent or treated unfairly. So this particular service is very important to our residents sure that there be that they’re treated fairly, that their rights are not taken advantage of.”

There are 15 open cases, and the Corporation Counsel’s office has recommended a local attorney who will work on a contractual basis “to maintain those services and make sure our residents rights are not taken advantage of,” he said.

Keegan had been a candidate for the permanent director job, “but she made decision to do something different,” Daniels said.

Human Relations is working to set interview dates for the candidates, he said.

The BET approved a $66,523 transfer from various police department accounts to pay for a new animal control van. The van had previously been approved in a capital budget but the price of police cruisers was higher than expected and the money was needed to make that purchase, Norwalk Police Chief Thomas Kulhawik told the BET.

An assistant second dog warden has been hired and a second van is needed so both wardens can work “prime time,” in overlapping shifts, Kulhawik said in a memo. The existing van is a 2012 and will become the backup vehicle, he said.

The van itself is about $38,000 and the remainder is going into the operating account “so we can update safety equipment,” Norwalk Administrative Manager Mickey Docimo said.

The money is available to be transferred because many seminars were cancelled because of COVID-19, Docimo said.

“I work closely with (Norwalk Director of Management and Budgets Angela Fogel) every day and our budget is in total balance,” Docimo said. “So these items will not put us in danger of being deficit anywhere. So you know, we feel good about the transfers and the equipment that we can get if they if they’re approved.”

Kleppin also requested a $60,000 transfer “to take a focused look at Norwalk Harbor in order to make land use decisions that maximize its economic potential, provide access and enjoyment to the waterfront for our residents, while ensuring that water quality is enhanced and not negatively impacted by development in proximity to the harbor.”

The City has contracted with Boston-based consulting firm Utile to do an industrial zones study.

“I was hopeful that the waterfront could be included in the ongoing Industrial Zones Study but the issues related to the waterfront are very complex and require more careful planning,” Kleppin wrote. “Initially, the consultant looking at the industrial zones was going to recommend a separate study of the waterfront, but it is more economical and will take less staff time and resources to simply expand the budget to add these additional tasks.”

Vonashek said her department wanted to amend Utile’s contract to include “a deeper dive in the waterfront parcels specifically.”

“They did bring on an extra team member for that specific aspect of the project,” Kleppin said. “So they are familiar with industrial land. But there were specific concerns they had related to the waterfront in terms of you know, obviously, if you’re talking about the depth of the water channel, sea level rise impacts and those kinds of things which may not come up as much in their day-to-day work, they brought an extra team member on to help facilitate that part of the project.”

BET member James Frayer asked about a promised police study to locate a new home for the marine unit. The $30,000 study hasn’t happened yet, Fogel said. Vonashek said police are looking at city-owned parcels and Kleppin emphasized that his study will be broader based.

“I think what the police department is doing is bringing on a site selection team that will look at the five sites that are owned by the city and assess if those five sites are suitable for a marine unit or not,” Vonashek said.

“We’re looking at what the best uses of land should be known in the future for those industrial properties based on different things that are occurring in the economy, things that we maybe haven’t thought of, because the zoning around those parcels right now hasn’t been looked at in a very long time,” Kleppin said. “And there’s also interest to get at the water from the public standpoint, in terms of waterfront access. So how do you accommodate allowing people to get at the water while also allowing marine industry to thrive? So that those are the kinds of things we’re looking at with the studies.”

Is Casey just realizing we are in a real estate boom? It started last March. Hello people!