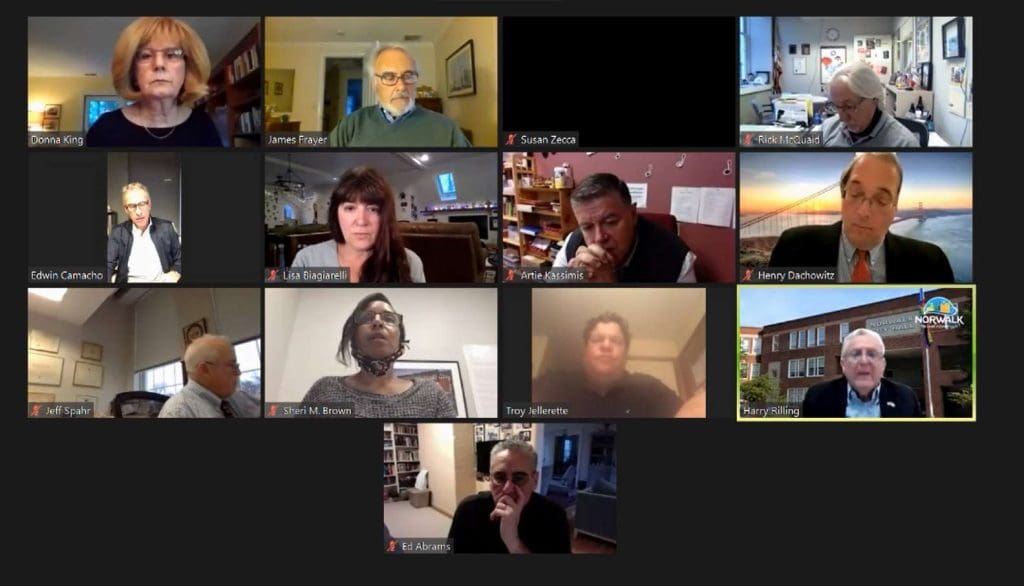 Wednesday’s Board of Estimate and Taxation meeting on YouTube.

NORWALK, Conn. — Norwalk parents turned out Wednesday to pressure the City’s tax board to fund Norwalk Public Schools. So did a child, who played “Happy Birthday” on a flute to make her point.

The hearing began with a hopeful note: Mayor Harry Rilling suggested that the BET increase school funding by $1 million, that is, $1 million more than allocated under the Common Council’s budget cap.

This would bring Norwalk Public Schools back up to a 2% increase from this school year, short of the 4.6% increase school officials say is needed to avoid “cuts.” The school system is grappling with contractual wage increases and rising health benefit costs, and officials have called the budget request “fairly flat,” arguing that it doesn’t fund new programs but seeks to continue the existing ones.

The requested increase, in a time of great budgetary strain, already had “cuts” factored into it, the elimination of eight positions and the per-pupil supplement to magnet schools, which amounts to a $1.5 million reduction by itself.

Rilling’s $1 million would come from the reduction of City department budgets that he requested after the Council set the cap, and from reducing the contingency fund by $500,000. The public hearing ended as soon as the public speaking ended, with no comments from BET members and no vote.

All of this comes as Norwalk waits for details of funding through the federal American Rescue Plan.

“Norwalk stands to receive on the city-side somewhere between $22 (million) and $39 million, depending on how they decide to allocate the money,” Rilling said. “Also, on the Board of Education side, Norwalk Public Schools will be receiving a similar amount of perhaps not quite as much, but certainly a lot of money in the millions of dollars.”

There are strings attached, and Norwalk is waiting to find out what they are.

“History has shown us that when the federal government allocates funds for a specific reason, they generally put restrictions on the money on how it can be used,” Rilling explained.

But, “We’re cautiously optimistic that when all is said and done, that the money coming in will serve to fully fund any requests and strategic plan that the Board of Education has, and also to keep the city taxes at a flat rate,” Rilling said.

“It is tragically, almost unimaginably horrible, what (elementary school children have) had to go through since last March, going to school in masks and not seeing your friends and not enjoying a normal childhood in a way that none of us can imagine,” Tyler Fairbairn said.

Fairbairn, Community Development Administrator for the Town of Greenwich, warned against depending on a federal bailout.

“I’m a municipal grant writer and federal grant manager by profession. I know people talk about grants so often, at these hearings in the news on the you know the Facebook pages. It’s not that easy,” Fairbairn said. With the American Rescue Plan, “You don’t get a check and you get to plug all the gaps in your budget with it. So I would urge everybody to be extremely cautious and extremely conservative if you think that that is going to be the answer for the Board of Ed budget shortfalls, it almost certainly will not.”

Jason Penta said, “Elimination of the magnet school funds would have a devastating impact on the magnet school students, making it nearly impossible for these schools to deliver the unique high quality educational opportunities that have attracted so many families to Norwalk Public Schools.”

Penta spoke of Tracey Elementary School’s status as a National Blue Ribbon School, and said, “There’s a reason why the culture and curriculum at Tracy Magnet has attracted many neighborhood families back to Tracey, as well as drawing in families considering or currently enrolled in local private schools. We ask that you continue to support our school system.”

Tracey Elementary School Principal Theresa Rangel came next, mentioning the late George Floyd and calling education “the most powerful mechanism to end oppression,” and, “I am proof of it.”

“I read the newspaper and the blogs and the comments, and I will have to admit that there are some confusion,” Rangel said. “There’s lots of talk about dishonesty, subterfuge, dollars, taxes, etc. And I see very little talk of this community’s most precious asset, and that is its children.”

Many spoke of the 6% increase originally afforded City departments in comparison to the 2% recommended to Norwalk Public Schools. Mandy Singh, also known as Amanda Whitman, asked what message that sends.

Singh said her Cranbury fourth grader is learning to play saxophone and she would hate to see his saxophone career end in fifth grade because of an NPS budget cut.

April Wennerstrom said her daughter has learned to love the flute at Cranbury and hoped to learn to play “Happy Birthday” a year ago, before the schools closed. She has since taught herself.

“Without band, I would not enjoy coming to school every week,” A.J. Wennerstrom said. “… At recess, my friends and I enjoy playing kickball and soccer. If the schools cuts of sports money then we will not have to come to them we would have to come up with new games that don’t use physical equipment.”

Then she played her flute, for “whoever is next on the birthday list.”

“Forcing the schools to make cuts that will hurt children is morally unacceptable,” Ed Philip said in a letter read by King. “However, after what the kids in our schools have dealt with for the past year is downright offensive, the pandemic has infected our children in ways we have yet to understand both mentally and academically, and the adults in the room have decided to double down on those negative impacts of course the schools to make cut cuts to athletics and music. That doesn’t sit right with me.”

Only one speaker expressed a different point of view.

“I agree that the Board of Ed deserves more funding for its wonderful programs. However, there have been years of additional funds placed in. What is being discussed today is taking a percentage of an increase of what has been funded,” Diane Lauricella said.

She suggested that the hearing end with a discussion of the 6% to 2% narrative. “I don’t think that’s a true analogy and I think it’s been misleading to many who are here tonight,” she said.

Board of Estimate and Taxation Chairman Ed Camacho ended the hearing without comment.

In the interest of transparency, open City Hall so that people can see how crowded the central office is. It’s way past the time for a headcount. Compare this year’s staff with last year’s. Compare the 3rd floor staffing, including consultants, this year against last year. My guess is that the consultants are not listed with BOE employees, and so they may not appear in Munis. Perhaps FOI is the way to get this information.

Why is it that the proposed cuts are of people who work directly with NPS students? Faced with cutting the consultants and the administrators, the superintendent will find a way to work within the budget.

Get ready. I seem to recall an “unexpected number” of students enrolling in the past. We have a new wave of students coming with the issue/challenge/crisis. Is there a forecast of student enrollment based on the past 5 years?

For those who could not “Zoom attend” the BET Operating Budget public hearing, the main part of my commentary had to do with helping find places in the line-item Budget where money could still be saved and revenues increased so that valuable BOE initiatives could be funded. I felt that the the City and NPS budgets could be selectively scrubbed some more, embracing the pledge to “look under every rock” stated by various officials:

A sampling of just one of those “rocks”:

Enforcement Penalties: I applaud the Administration for creating the Zoning Citation Court, usually held midday on Wednesdays, to help “clean up ” neighborhoods. But the result is mostly administrative. This can definitely mitigate the case under discussion, but monetary penalty that matches offense can act as a great teacher. One additional step that should be considered is a robust education effort in order to give our businesses and land owners a shot at complying right up front.

At every level, especially Zoning, Buildings. Fire Marshal and Health, violations should have, if deserved, significant monetary penalties attached to provide not only a disincentive to others but a true way to change societal quality of life behaviors.

My comment related to 6% vs. 2% had to do with a problem when you compare apples to oranges. The City-side Departments have been starved of several needed funds for many, many years that we ALL benefit by.