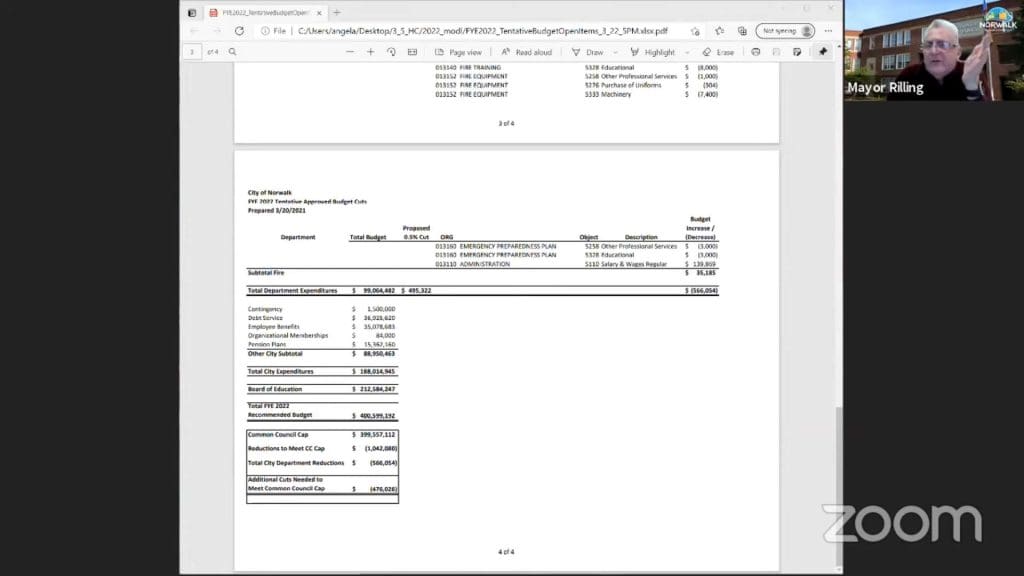 Mayor Harry Rilling touches on the bottom line, Monday during the Board of Estimate and Taxation meeting.

NORWALK, Conn. — Norwalk has a new goal for its developing budget: no tax increase next year.

A pile of money is expected through the American Rescue plan, otherwise referred to as the $1.9 trillion federal spending bill, but while specific dollar amounts aren’t available yet, it’s crystal clear that the rescue money cannot be used to lower taxes, Norwalk’s finance-types said Monday.

The Common Council agreed to an average 3.6% mill rate increase last month. The idea now is to keep the mill rate at its current level, Mayor Harry Rilling said at the Board of Estimate and Taxation meeting. That’s not a decrease of the actual tax, just a lowering of what had been planned. The trick is to figure out how to accomplish it by the City’s deadline, April 14, when details of the federal appropriation likely won’t be available until May 3.

Rilling suggested that perhaps next year’s contingency fund allocation could be reduced and suggested projecting a surplus in this year’s contingency that would be applied to next year, to avoid demanding that the Board of Education cut its budget further. This led to sharp criticisms of Norwalk Public Schools’ budgeting.

In the end, BET members worked their way to a public posture for Wednesday’s public hearing, referring to “optics,” without taking a formal vote in what they said was just a “workshop” meeting.

“Hopefully, there’s a brighter future when it comes to our budget” due to the American Rescue Plan, Rilling said.

The plan had been to draw $8 million down from the general fund balance, or Rainy Day Fund, and, “We probably could get away with drawing down significantly, significantly less money,” he said.

‘I don’t understand why’

“There’s restrictions when you get federal money, they want to make sure that it’s used for its intended purpose,” Rilling said. “We’ve been working with our federal delegation, namely (U.S. Rep. Jim Himes) office to kind of get an idea of what those restrictions might be, what the amount of money we’re going to get, might be.”

Half of the allocation will come in 2021-22 and half the following year, he said. He’d read that school districts can use it to prevent layoffs and reduce class sizes.

BET member Troy Jellerette asked if there would be any hiring done, as that would need to be funded after the Rescue Plan expires.

“The City is not going to be hiring anybody regardless of how much money we get,” Rilling said. The Board of Education, hopefully they’ll use it, if it’s allowed, to avoid layoffs.”

After the Council set a cap that is $1.04 million lower than recommended by Norwalk Chief Financial Officer Henry Dachowitz, Rilling instructed City departments to shave .5% from their budgets. Director of Management and Budgets Angela Fogel said that almost every department had done it.

The exception is the Norwalk Fire Department. There were many cuts but the department is hiring an assistant fire chief for a $140,000 cost and the end result is the budget is going up $35,000, she said.

This led to discussion of the contingency account, which Rilling said is about $1.5 million yearly but isn’t used entirely, and Dachowitz described as “a cushion for the budget.”

Board of Estimate and Taxation Chairman Ed Camacho indicated support for shaving the contingency allotment, given the federal funds on the way, but BET member Ed Abrams called that “risky.”

BET member Sheri Brown characterized the idea as sensible, given the unprecdented times. “My sense is that the budget that the departments have already come up with are very lean,” she said.

BET member James Frayer said he’d missed last week’s meeting – the one that wasn’t recorded – and asked if school representatives had offered to cut their budget. Camacho said that instead, they had pressed for the funding they’d asked for and Rilling pointed out that the 4.6% increase requested was already a decease from the original request.

While it’s reported that Norwalk Public Schools may get $29 million from the American Rescue Plan, clearly the City can’t count on that, Frayer said, suggesting layoffs of support personnel.

“I don’t understand why, when a city with a with a bare bones budget can… work very, very hard to reduce those numbers, I don’t understand how the Board of Education comes back…tries to push through an increase of the number that we’re recommending,” Frayer said.

“We’re all suffering here,” Frayer said Monday. “And I feel very, very strongly that in a budget that size, it’s larger than the city’s, I can’t believe that they can’t come up with a quarter of a percent. That’s to me unbelievable.”

“I know that maybe their request may have been far more than was really necessary,” Camacho said. But the BET didn’t press NPS to cut its budget more last week because it recognized that the district had lowered expenses when it added employees.

The Board of Ed has had a surplus year in and year out, Frayer said.

The City-side doesn’t “play those games,” Dachowitz said. City departments ask for what they need and when the Mayor asks for a further cut, they do it. “We shouldn’t get penalized on the city side, because we play it straight,” Dachowitz said.

“I think based on conversations, they don’t anticipate a surplus this year, but they always seem to find one when it comes time to carry it over,” Rilling said.

“I’m tired of being sandbagged,” Frayer said. He described it as a tactic: people over estimate their budgets and then play hero when they come in under budget.

“I feel bad about it,” he said. “But I have this feeling just from my years on this board and watching the performance, year in year out, the same thing. And I feel like a fool because I get taken every year.”

“Quite often the Board of Ed does get sandbagged themselves in terms of having to fund for out of placement for children who have disabilities, and shall have special learning needs,” Brown said. “Sometimes they will be issued a court order that says ‘you have to spend X amount of dollars for this child.’ Now I don’t know, for a fact if that’s why they have a little bit of a slush fund. But you know, it is necessary, because that money has to come from someplace.”

“We have to make sure that the public understands that this is very tentative because of the anticipated American rescue fund monies coming in,” Rilling said.

“I think the Board of Ed could always come back and ask for another $225,000 at the end of the year, if they need it, from contingency,” Camacho said. But if, “for purposes of presenting something to the public,” if they take the hit for the moment, “there’s more flexibility.”

The only problem is the optics, because at the beginning of this process the City had a 6% increase while NPS had 2%, Abrams said.

Rilling said he’d recommended cutting the $1.5 million contingency fund by a third because, “I strongly believe that we will know how much money we’re getting and how it can be used well before we have to set the final cap” on April 15. The percentage numbers have “already been a big topic of discussion” and now that the City has cut its budgets, the numbers are closer.

“The only problem with that is that we historically, we look at the surplus that the Board of Ed always has. And I think you can’t ignore that,” Frayer replied.

Brown said the City and Norwalk Public Schools have different mission statements. She asked if her fellow BET members had been to a school or sat in a classroom.

Camacho said he had, as a child.

It was resolved that for the purposes of Wednesday’s public hearing, NPS would remain at a 2% increase and the City at slightly under 6%.

“The key here is that we, as a Board, I think, are always good protectors, guardians of the city money,” Rilling said. “We try to do the best we can, to save as much as we possibly can and to spend as little as we possibly can. I don’t see that changing.”

He said, “My desire is to use this money that comes in to serve the greatest good, to keep our taxes flat, to serve as many people with this money as we possibly can.”

Please keep taxes flat. The state is already planning on putting their long arms into almost every homeowners pocket

As for the potential 2 year windfall- please spend it on non reoccurring expenses. Otherwise in year 3 we will get walloped with massive increases

Please also keep in mind that if you read the news at our southern boarder there is a large likely hood we will se a significant increase in enrollment.

In addition to that, if Judging by my neighborhood, a lot of real estate changed hands to younger families that will also increase our student population.