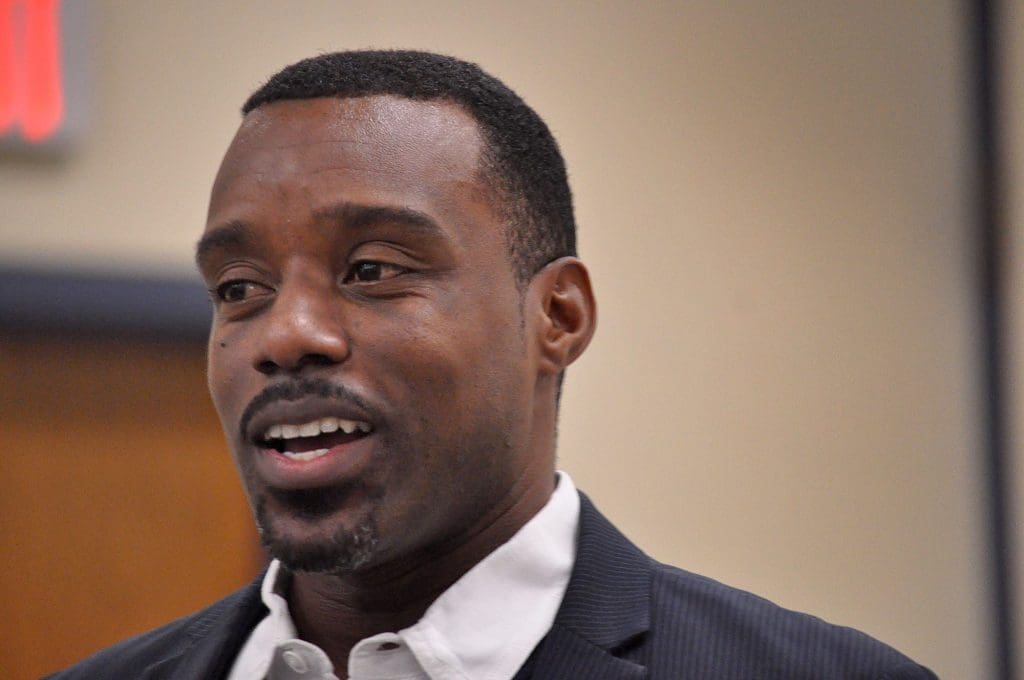 NORWALK, Conn. — Bruce Morris, a former Norwalk Public Schools employee known for sharp criticism of the district, is among the community leaders praising changes in the Board of Education.

The comments follow the election last week of three Board members who have only served for a year to the Board’s executive committee. Colin Hosten was made Chairman, replacing Sarah LeMieux; Diana Carpio was chosen as Vice Chairwoman, replacing Heidi Keyes, and Godfrey Azima was elected to continue as secretary.

“I think it’s a phenomenal thing,” Morris said Tuesday. “It will be great to see what these new Board members do. I am confident that the remaining Board members will do what they can support them, and they’ll work together as a team. The rest, we will see as it goes along.”

The Board vote puts two Black men and an Hispanic woman in charge of a governmental body that was all-white before the 2019 general election. Two came in as part of the local Democratic sweep and were swiftly dealing with acrimony inspired by the release of an email written by then-Board Chairman Mike Barbis. That led to the new Board chairman resigning and Hosten, who had been elected to the Common Council, being appointed by the Democratic Town Committee to replace him.

LeMieux stepped up to lead the Board, seemingly reluctant but with a sense of duty, and continued through Nov. 19.

“This has been an intense year, and I’m really looking forward to spending more time focusing on my family. I’m confident in the new executive committee the board elected yesterday and happy to support them in every way,” LeMieux said last week.

“I guess I expected Hosten to become chairman at some point,” Morris said Tuesday. “Sarah did a phenomenally wonderful job. I am going to miss her being Board chair, I really am. I think she steered the ship in a really good way, at a very tough time.” 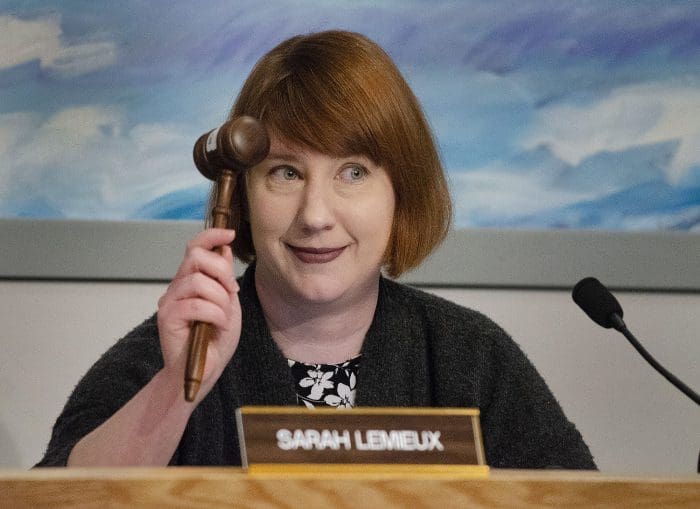 Norwalk Board of Education Chairwoman Sarah LeMieux playfully lifts the gavel for the first time, Dec. 3 in City Hall.

LeMiuex walked into “all the acrimony” with a “calm level head” and “kept everyone else pretty calm and level,” Morris said. “She was very sensitive to concerns that were raised that were had been raised over the years by the community. We expect that she would be and she did a stellar job.”

The equity study being facilitated by Eddie Fergus, Ph.D., is a “positive thing,” Morris said. “It isn’t like the Board is doing window dressing on an issue that was really causing a lot of problems for the Board of Education for more than a decade.”

Morris, former District 140 State Representative, is among a quartet of then-NPS employees pegged as “Four Horsemen” by former Board Chairman Mike Lyons and other white reformist-minded then-BoE leaders several years ago. Morris has sued Norwalk and alleged racial discrimination in the elimination of his job as NPS Schools Climate Coordinator.

A trial is scheduled for April. 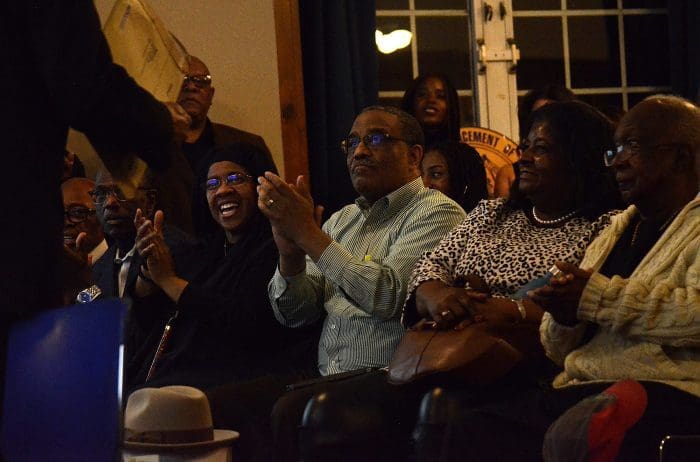 From left, former Board of Education member Shirley Mosby, former State Rep. Bruce Morris and Norwalk Branch NAACP President Brenda Penn-Williams react to a speaker during the November 2019 Board of Education meeting where NAACP members and others called for former BoE Chairman Mike Barbis to resign.

Morris, on Tuesday, said, “In my view, it’s a much better Board (now) and would be even better if one person resigned.”

That was a reference to Barbis, who got the Democratic endorsement to continue to represent District E last summer, ran unopposed and was elected to another four-year term.

Barbis has ignored calls for his resignation. He voted for both Carpio and Azima but against Hosten as new Board chairman, explaining later that it’s because Hosten was appointed, not elected. Barbis charged that they had both been candidates for chairman until the “politics of mayor’s office interfered with the BOE.”

Mayor Harry Rilling did not respond to an email asking about Barbis’ comments.

On Monday, she said she thought the community is “happy” at the turn of events. It’s a good thing, she said.

Jalin Sead, a Black community leader seeking to unseat Penn-Williams as NAACP President, said he is “very pleased to see the new leadership of the board.” 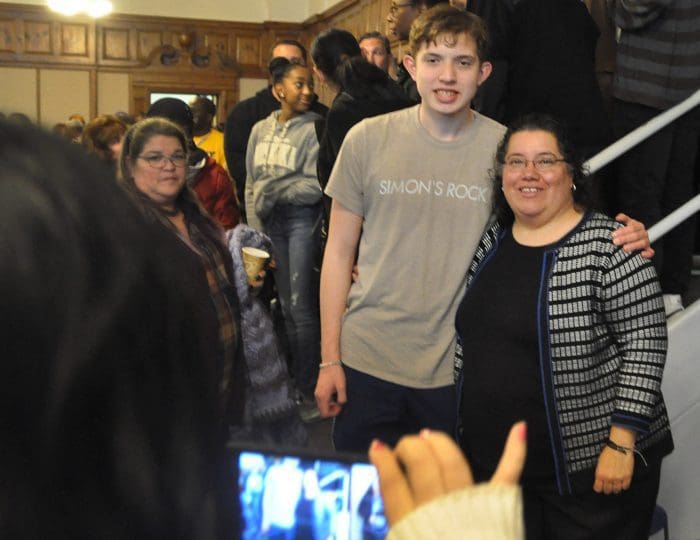 Norwalk Board of Education member Diana Carpio, right, shortly after being sworn in on Nov. 19, 2019.

“I have had wonderful conversations with Ms. Carpio, and Mr. Azima and look forward to speaking with Mr. Hosten; but I am pleased with their desire to do what is right for the children,” Sead said in an email. “This contrast between the new Board, and the Board of past, isn’t just white and black, it’s a step in the right direction away from a toxic board. I’m hopeful that we will have a leadership that will be fair, inclusive and respectful to the community they serve.”

Norwalk’s school district has become majority-minority. In January, then- Norwalk Superintendent of Schools Steven Adamowski said the student body is only 25.5 percent white.

“The racial and ethnic makeup of school boards rarely matches that of the students in the schools they are responsible for. Yet a growing body of research suggests having more diverse school boards can make concrete differences in how schools operate,” Christina Samuels wrote last week in Education Week.

Even one Hispanic member can make a difference, she said.

There haven’t been many Black leaders on the Board of Education: the late Rick Fuller also served as a BoE from 1985 through 2007, according to The Hour. Rosa Murray served as chairman twice during her 20 years on the Board but was rebuffed when she ran for the post again in 2013 and ignored in the 2014 contest.

For the Hispanic community, the late Judith Rivas served for 2.5 years before resigning in 2006 and being replaced by her sister, Migdalia Rivas, who served until 2014.

So the difference from the all-white Board of 2017-19 to the 2020-21 version, which also features Sherelle Harris representing District B, is all the more striking with the election of Hosten, Carpio and Azima to all of the leadership posts.

“It’s an honor to be part of a historic moment in some small way, and I look forward to working with my fellow Board members to continue improving our school system to ensure every child has access to a world class education,” Hosten wrote in an email.

He said, “Certainly, with such a diverse group, I would expect that the needs of children of all colors in all economic strata would be addressed. And that’s a positive thing. So good news. It’s good to see people give fresh blood a new chance and you know, work together.”

I wish this new Board good luck. They will need it…The honeymoon with many of those quoted above will be short lived if history has taught us anything.
My personal recipe on educating our kids includes diversity, but also includes SCHOOL CHOICE and private school VOUCHERS. Of course this won’t sit well with Democrats protecting unions. After all Education is a BIG business and with that comes BIG power.
Why do people pay property taxes and send their kids to private school? Because they’re racists? Because they’re antisemitic? Because they’re religious zealots? Because their kids are afraid of big schools? I’m guessing none of the above…Maybe we should have one of those “tough” and “open” conversations about why that is. Are educational leaders afraid of what the answers will be? If current public schools are the best in the business why not also allow school choice? Is “competition” considered a politically INcorrect word in current culture? The silent majority (that includes Black, Brown and White taxpayers by the way) should demand to be heard. Let our parents decide what school their children attend. Why should we leave it up to overpaid bureaucrats with an agenda that doesn’t always involve those kids?
Until that happens all this liberal mumbo jumbo is just a facade to keep the masses confused and contained.
That being said I look forward to my first Deep Fried Turkey dinner with my family. Followed of course by tailgate Friday afternoon to watch Notre Dame consume Tar Heels in Chapel Hill. For those who don’t know Ned Lamont and Harry Rilling are allowing us an exemption on numbers to tailgate for ND football this season. We thank them for their flexibility.

I grew up in a multi cultural community, my family is multi racial and as long as the people elected / selected for these seats/ positions want to do well, for all the student body I am good with that. word!