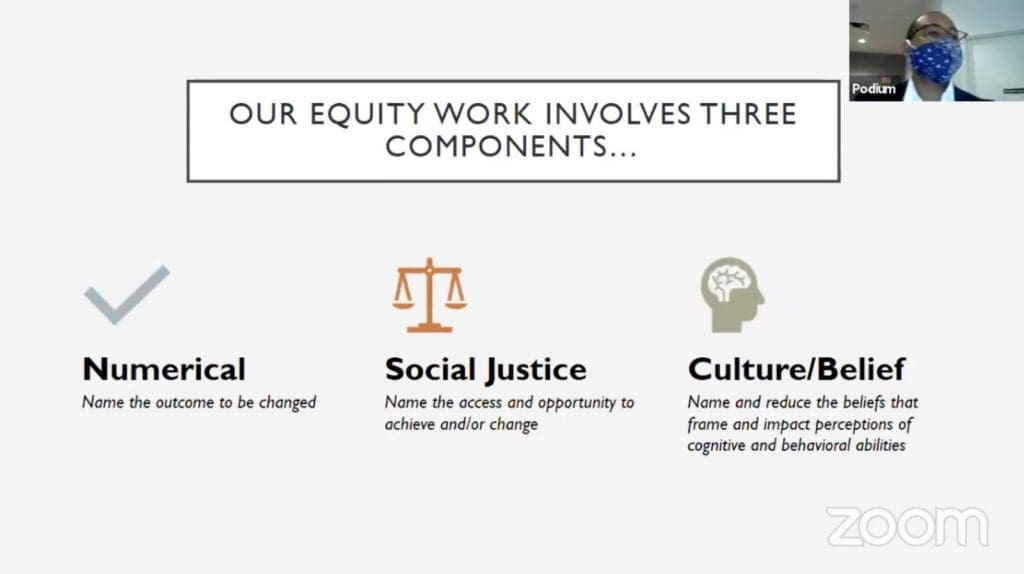 Eddie Fergus, Ph.D., associate professor of urban education policy at Temple University, presented the Board of Education this week with the framework for a pilot equity program that is taking place in Norwalk.

Superintendent Alexandra Estrella said that this was “the design of our equity lens (for) the listening and learning tour,” and that it would “provide the scope of the work ahead.”

“What are the sort of factors, and in particular school level factors, that are directly or indirectly playing a role in the ways in which disproportion or disproportionality patterns exist within our school settings?” Fergus said, stating what they’ll be looking at through this project.

The plan is to collect data through surveys and focus groups during October, analyze the data during November and December, and then lay out a report for the board in January.

As of Tuesday, the surveys had been open for about 4-5 days, and 187 parents had responded along with 159 school staff. Fergus said they’re going to be looking at who is responding to the surveys to make sure a group is not over- or under-represented. There will also be student surveys and focus groups later on in the month, he said. Virtual focus groups started this week with in-person focus groups starting next week.

From school staff, Fergus said they’re looking to find out “their perceptions around school quality resources that they see happening in their school, the efficiency to which practices are happening, particularly around behavioral and academic supports,” as well as “their perceptions of leadership,” and “their perspectives around culture and race.”

Parent surveys also include questions on culture, race, and in particular, colorblindness, cultural knowledge and responsibility, racial discomfort and deficit thinking, or “what’s the degree to which we also hold some of these concepts within our own sort of lived reality,” affect their views.

One of the areas they’ll be looking at is the “patterns of disproportionately” that show up in particular settings, which can lead to predisposed biases, Fergus said. He gave the example of seeing boys get disciplined and not girls.

“If we’re constantly seeing boys experiencing discipline, we could easily start developing a normalized understanding that only boys get in trouble, right?” he said. “Girls don’t get in trouble. Girls don’t do externalized behavior. When in fact, what we have to reconcile is that it’s not necessarily about, that there’s a problem inherent in the particular population. But there may also be something about the manner in which we’re doing our practice.”

During this first year, school leaders, in particular principals and assistant principals, will be identifying areas of practice, such as how students are disciplined, how students get classified for special education, and how students get selected for gifted or advanced programs. Each building will identify one or two of these areas to dig into to the data on to see if there are disparities, what they are, and how they can be rectified.

“Part of what we have to grapple with is, how those patterns of inequality, those patterns of disparity, are existing,” Fergus said. “And that means that we have to develop a level of equity literacy that allows us to know, to be able to ask ourselves hard questions around our practice, not only sort of, why do we do what we do? How did we arrive at this? But also, how did we arrive at a place where it’s happening for specific groups of kids, and what gave permission for that to continue?”

Estrella said that for example, they could look at how diversity has changed in some of these programs over time, or how new initiatives and programs helped to influence them.

“If we’re looking at gifted and talented and specialized programming, like advanced placement for instance, we would look at the patterns and trends of diversity and how that how those groups have either increased in diversity, or certain marginalized groups, how those groups have been better represented over time based on shift in practices within the work,” she said.

Fergus said some of the work includes breaking down predisposed biases or assumptions about where a particular student or group of students belongs.

Estrella said as a part of the board’s next business meeting, she will provide “a timeline of the work that Dr. Fergus in collaboration with all the other elements—with the RFP for the facilities, special education reviews, and all the other components that will lead to the development of our new strategic operating plan.”

I’m not a PHD, but you might want to start at the kitchen table.

My sons attended Norwalk PS, K-12, receiving an excellent education and achieving acceptance to upper tier colleges. NO COMPLAINTS. To put the timeline in perspective my grandsons are now in or graduates of college.
Besides the obvious goal of supplying the very best ecucational experience for every student I see two issues:-reaching an educatiponal status that makes us comparable to our neighbors (not just “other cities of our size and diversity”) and providing equal access for all students to an excellent education consistent their capabilities.
Regarding the first I am not blind to the different realities in a “privilidged” town and a “diverse” city but I don’t accept that our goals should be lowered. We owe it to all students to “shoot for the stars”.
My second goal is much more problematic. In Utopia the teacher population and the student dispersal across all levels of programs would mirror the makeup of our population and no educational “disparities” would be identifiable, not in the evaluation and “labeling” of students, not in acceptance to elite programs, not in the administration of discipline nor in punishment for breaches. But how are we to achieve this?
The article states “We’re also putting new practices in place that is (sic) predicated on recognizing that we’re not giving permission for us to have disparate disproportionality patterns existing with our groups of kids” but how do we accomplish this. Is it by “dumbing down” our expectations or adopting affirmative action programs that eliminate disparities artificially or do we take the long hard road of starting from the beginning to attemot to bring all students to the highest level of achievemenbt consistent with their abilities (with no bias in evaluating the latter).
Tough task but I hope we are dedicated to eliminating educational disparities by raising everyone up to a higher level and not lowering the level.

I read this and I see that the kids that are in the upper educational groups will be lowered to make more room for diversity. So someone who may not have the grades will get bumped down to pave the way for diversity. I am amazed lately especially as my children get older how the above average kids get forgotten about. They are going to drive all of these families out of Norwalk and they have been. The BOE should really publish the changing demographics in this city in the past five years.

I’m calling BS on all of this

Ask almost ANY teacher and they will agree with my statement.

@Nora, you are correct about the BoE cancelling programs designed for exceptional students in favor of MORE programs for the disadvantaged kids.
That is why all three of my kids went to private schools.
If the programs aren’t working, redesign the programs, not throw more spaghetti against the wall to see if it sticks.

“What are the sort of factors, and in particular school level factors, that are directly or indirectly playing a role in the ways in which disproportion or disproportionality patterns exist within our school settings?” Fergus said.

Here’s the most relevant data:

In the 2019 state test, 66% of African American 3rd graders in Norwalk Public Schools tested below grade level in math, compared to 64% of Hispanic students and just 29% of white students. The “average” Asian student scores in the grade level range for a 4th grader.

There’s the achievement gap. At age 8, it’s already there and it’s massive. The 8th grade scores show a slight decline across the board, but there’s no obvious evidence that the gap is increasing.

In my opinion, this effort is doomed to fail because it’s trying to identify how schools contribute to gaps in proportionality, where every piece of evidence points towards it being the result of external factors that the schools can’t control. The “school level factors” are an incredibly small piece of the puzzle.

That said, think about those students of all races who are already behind starting 4th grade. These students are de facto socially promoted to the next grade every year, meaning they have 9 years of school ahead of them where they are going to be mostly lost and struggling to learn a curriculum that they are not prepared to access. It’s brutal. No wonder they become disengaged! I think they would be better served by accessing alternative programs with slower paced curricula focused on their needs instead of continually trying (and failing) to shove them back onto the grade level track.

I will add to this that the gifted and talented program has been gutted academically for MS students, and is now nothing more than an indoctrination in social justice and diversity theory.