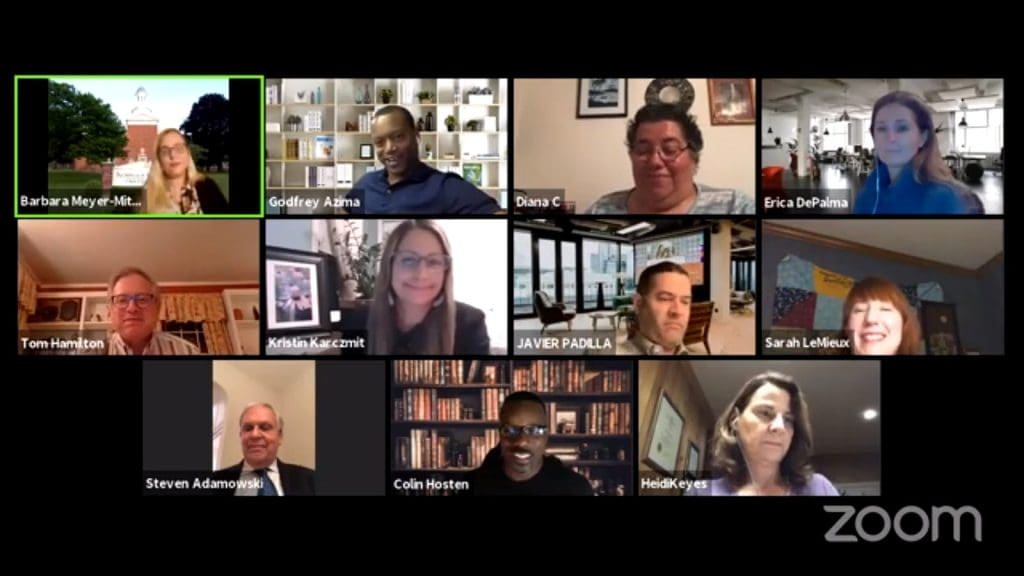 Tuesday’s Norwalk Board of Education meeting, on Zoom.

NORWALK, Conn. — The budget for the coming school year was finalized Tuesday with nary a word from Norwalk parents.

“This is the most we’ve ever discussed a budget ever, and it’s great that we really know what’s in it and the community knows what’s in it,” Board of Education Finance Committee Chairwoman Barbara Meyer-Mitchell said. “And I think the fact that there’s nobody here for public comment is a testament to that, everybody knows what they asked for, what they got and why. And that feels good.”

The $208.4 million 2020-21 operating budget includes a two-year phase in for Kendall Elementary’s year-round schooling pilot program and funding for the healthier school start time program. Meyer-Mitchell also noted that, “We were able to meet our enrollment needs and achieve as many goals as we could from our Strategic Operating Plan. I’m very pleased that we were also able to continue to support the ELL (English Language Learner) programming, the robust SpEd rollout of programs and the wellness initiatives, especially around SEL (social-emotional learning) and lunch practice.”

Norwalk Superintendent of Schools Steven Adamowski, in his last Board meeting before his retirement, gave an overview of the current enrollment. Norwalk Public Schools had 11,910 students at the end of the school year, a figure that has been stable since the COVID-19 school closure, he said, predicting that enrollment will grow to 12,000-12,100 students in the fall.

“You will notice that our largest cohorts are now in grades six through 10,” he said. “Ninth is the largest. Third is the smallest, however, kindergarten is growing again. And next year, kindergarten will be even larger. So, we see as predicted in our enrollment projections, a school district that will continue to grow, to parallel the city’s growth.”

The projections do not build in immigration, he said. Immigration basically stopped March through June and it’s possible it will increase again. The district is at 15 percent Special Education, slightly more than at the beginning of the year, and the free and reduced lunch population is at 60 percent, “an all-time high.”

That’s “comparable to beginning of the year” and “fairly predictable,” Adamowski said. Once lift returns to “normal,” after COVID-19, “we’ll see what happens then.”

“I think that the new schools are coming in the nick of time and I’m hoping that the last really acute enrollment issue will be solved, soon by a school in South Norwalk,” Adamowski said. “But I think that, you know, it takes so long to build a school building, all that work of four years ago, three years ago, two years ago, is starting to pay dividends and you’ll see the first evidence of that as Jefferson moves into the lower school at Ponus.”

The brief budget reconciliation featured no fireworks, though the beginning of the budget season was fraught with drama as the Board of Education requested a $216 million budget and the Common Council allowed $208.4 million. This represented the largest increase ever, according to the Council. But it meant the Board needed to cut at least $6.6 million from its plans.

The resultant budget factors in a $1.5 million carryover from a 2019-20 budget surplus, described by Hamilton as 1 percent.

“The Board of Education is hopeful that we will be able to turn back $900,000 to the city’s general fund, if the accounts are balanced as projected,” Meyer-Mitchell wrote Wednesday. “We are acutely aware of the need the city may have due to the current economic conditions. The requested carry-over of $1.5 million is less than 1%, and much less than the 2% we are allowed to request to roll over by state statute, with city approval. We all need to work together to weather whatever financial challenges lie ahead.”

“We’re in a really good place. Surprisingly, given the circumstances in the entire world,” Board Chairwoman Sarah LeMieux said during Tuesday’s virtual meeting. “I think that I’m happy to be where we are. And I’m very thankful to the City for working with us and I think this is really good.”

Meyer-Mitchell thanked City leaders for “understanding that our growing enrollment is still happening, despite a global pandemic.”

The extensive discussion she mentioned was due to an emphasis on student-based budgeting, as individual School Governance Councils hashed out the details for their buildings.

Student transportation services account for $9.1 million of the budget, nearly $400,000 less than 2019-20, although additional services have been added to provide the healthier high school start time adjustments that were planned, and transporting Jefferson Elementary Students to the newly completed Ponus expansion, so that Jefferson can be renovated. It also includes more environmentally friendly school buses, that emit less particulates.

This budget factors in “the results of the re-bidding of the District’s transportation contract, and the savings {achieved} from moving to a new transportation vendor,” Norwalk Public Schools Chief Financial Officer Thomas Hamilton’s memo says. Savings are listed as $353,657.

The budget also includes $ 1,354,842 in health insurance savings. Salaries have increased by $ 5,563,735. This includes “contractual increases plus incremental increases and car allowances” and “salary expenses associated with budget goals and program improvements.”

The budget was approved unanimously, an 8-0-0 vote as Board member Mike Barbis was absent. Barbis was tied up with work in Greenwich, LeMieux said to NancyOnNorwalk.

Does anyone know the percentage of students that are not considered “special” in some way? Based on the numbers given it seems like the percentage of students that don’t need some type of help is extremely small. It begs the questions: What happens to these human beings once they’re no longer insulated by the system? If the trajectory of kids in need continues how do we pay for it? Will the Board agree to stop requesting huge increases year after year? Maybe it’s time to blowup the way kids are educated currently and go back to basics. No one wants to hear about discipline issues going on in classrooms but they certainly exist. I believe there should be an anonymous teacher survey moderated by non’union people on exactly what’s going on in classrooms. This should be transparent to the public. If taxpayers understood the impossible task teachers have in the classroom they would be shocked. This trend can not continue.

If we swapped all the kids in Norwalk with those in New Caanan what would the outcome be?

I’ve spoken to many teachers in the Norwalk School District. They have overwhelmingly been positive. They enjoy teaching, it’s sometimes a struggle (especially during Covid) but they enjoy having a heterogenous student body that sees and experiences the world in different ways. As for spirituality- that’s a tough one to assess, but I’d hasten to guess that attendance at religious facilities and related areas is probably not much different in Norwalk than New Canaan. Tough to compare a town with 20,000 people that is among the wealthiest zip codes in America https://money.cnn.com/gallery/luxury/2014/06/11/richest-zip-codes/17.html
to a City of almost 5x the size that has a wide range of incomes and wealth. As for Sanctuary cities? that’s a total non sequitor but it does tell you something about the poster.

If we swapped all the kids in Norwalk with new Canaan…everything better.