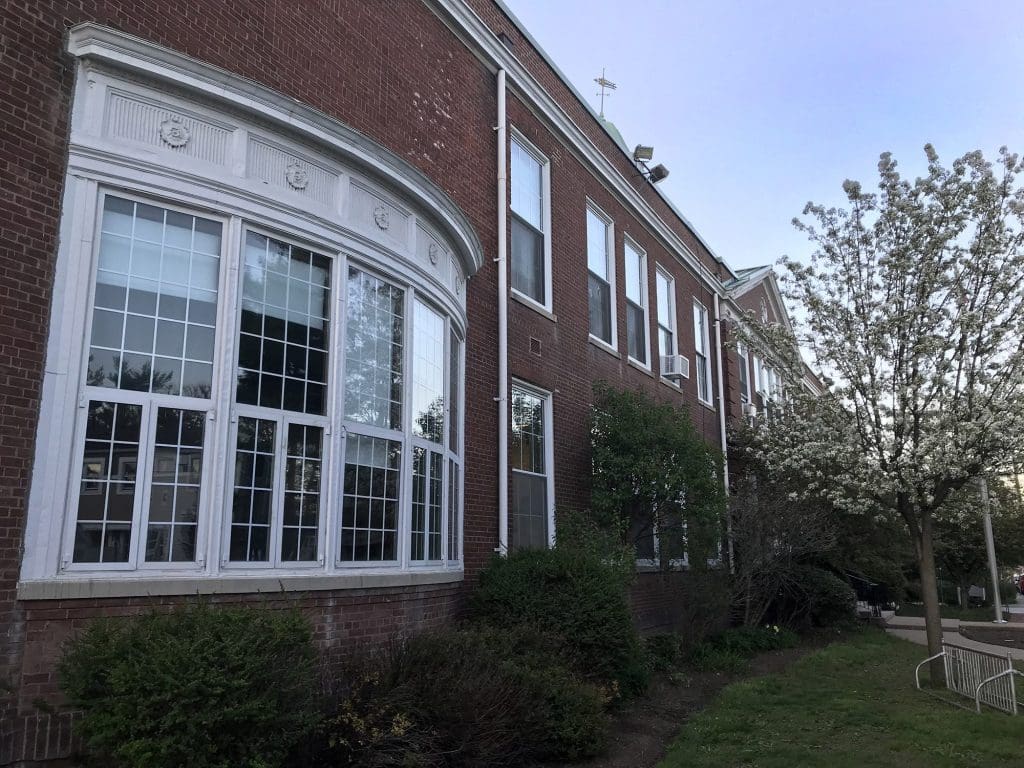 NORWALK, Conn. — The City is going through a land acquisition process for a 12-acre plot in South Norwalk, a potential location for two new schools, Norwalk Superintendent of Schools Alexandra Estrella said Wednesday.

A parcel is needed because the community rejected the idea of two schools on the existing Columbus Magnet School site, Estrella said at a public forum. She also explained, to Columbus Magnet School Principal Medard Thomas, that two schools could occupy one campus. Board of Education members joined in an effort to reassure parents that they would be separate, distinct entities, even if they are linked physically.

“Why do we have to share?” more than one parent asked.

This proposal would replace the 2015 plan to build a new school on the Nathaniel Ely property and renovate the Columbus Magnet School building on Chestnut Street.

The Ely Avenue plan isn’t moving forward due to objections to proposed open space land swap that would allow the City to build on Springwood Park. Those objections were spearheaded chiefly by former State Rep. Bruce Morris and his successor, State Rep. Travis Simms (D-140). The Common Council recently approved a $30,800 contract with JCJ Architects for conceptual design services and professional cost estimates for the Columbus School/South Norwalk school project.

Thomas told Estrella that he and the Columbus community are “really grateful” for the recent conversations about a new building, “more than we’ve had in the past several years.”

If Columbus shares a location with a South Norwalk neighborhood school, “It’s not an ‘us versus them,’” he said. “It’s an ‘us,’ and we’re part of the community. And we’re going to do this together.”

“It’s a top priority of this current Board to make sure that we get it done sooner rather than later,” Norwalk Board of Education Chairman Colin Hosten said.

The two schools would each have distinct spaces, while the 750 students would share common areas in the building, Estrella said. “So the cafeteria, the gymnasium, as well, or the gymatorium, for lack of a better term, because that’s how they they’re calling them now, would be the common spaces that will be shared amongst the two schools in the campus.”

She continued, “The plot of land is extensively large. So there will be sufficient space for students to have designated play areas throughout the campus because we’re talking about approximately 12 acres of land to be shared amongst the two schools. That is more than sufficient space for the two schools to have distinctive play areas, as needed, and different facilities within the campus to utilize for physical activities.”

The principals would coordinate schedules, in much the same way that Brien McMahon High School and the Center for Global Studies make it work, or the way that Norwalk High School and P-Tech do, Estrella said. It’s possible this would include Building Councils.

“We’ve been at this for five years, we’ve worked with different options, and we’ve hit various obstacles,” Board member Mike Barbis said.  “But I think now we’ve really come up with a plan that could work for really for everyone, and is a win-win.”

There are parents calling it a bad idea, one man said. “They’re asking defensive questions… We’re building a bridge to our kids future. When you are building a bridge, you do not expedite, you problem solve. You analyze the root cause of problems, you go backwards if you have to, until you get it right.”

Hosten replied by mentioning corporate culture at places like Google and Microsoft, where they “have figured this out.”

“Culture is a big issue. Culture is what makes these unique companies so amazing,” and culture makes schools amazing, he said.

“One of the issues in development of towns and cities, is that when you give developers the prime cut, the citizens are left holding what’s left over,” the man replied. “So major cities all over the country, when they give the developers the option to develop first then the city develops in afterthought, then you’re sitting here and doing something like this.”

Estrella spoke of demographics and agreed with Hosten that culture is key. Columbus has a strong culture, she said.

“We don’t see these schools morphing into one. That is not the intention of this. The intention of this is to create two self-standing schools that will sort of support the community with their very distinctive areas of focus,” she said. The Brien McMahon and CGS kids go back and forth but, “it’s very clear what the CGS culture is, what the Brian McMahon culture is, and subsequently for that to the other schools as well.”

The two schools plan is “not in any way” a “consolation prize,” Hosten said. “There was an initial plan that did not work out for a bunch of reasons. What we’re doing now is coming back and coming up with a different plan that will work out, but we are not at all interested in compromising on the quality of the education, the quality of the learning spaces, the communities that help to create that culture at all.”

“We have to think creatively” about building in South Norwalk, a more densely populated area than other areas of Norwalk, and it’s been shown in other parts of the country “that you can build a more densely populated campus without compromising any aspect of educational quality,” Hosten said. “I think that for several decades, Norwalk and many of the cities in Connecticut and across the country, have allowed different kinds of segregated practices to continue, really unnoticed. It’s a very segregated school system. If we allow some more interaction and, and experiential sharing, without compromising on any educational quality aspect, and I think that we have an opportunity to pass the paradigm that we’ve been stuck in a long time.”

A mother countered that schools like West Rocks have pride, and not having a separate building will diminish pride. “I just feel slighted, as a South Norwalk person and as a minority, or I don’t even know what we are at this point, that we have to be the ones to start this share,” she said.

Board member Diana Carpio said she and her son had been scared when P-Tech was created in Norwalk High School, but the two student bodies co-exist well, broadening the opportunities for friendship circles. Both have plenty of pride. “If anything makes the children stronger and the pride greater,” she said.

Thomas said, “As long as I’m the principal here, it will guarantee that CMS K-8 will not lose its identity, because we’ve worked very hard for the past 40 years to create what we have here. And there’s just no way that we will ever lose what we have here. Also, I promise that the South Norwalk school will never come in second, it’s not a competition, it’s not us versus them, I have to make that promise because the children from South Norwalk look exactly like me.”

A map of South Norwalk, from the City’s GIS ( geographic information system). Highlighted in green is 1 Meadow St. Extension, an 11.74 acre parcel owned by Hatch & Bailey. It’s appraised at $8.1 million and is adjacent to two city-owned lots.

Or Duff could pick up the phone and get DEEP to take a closer look at the existing plan for Ely and see how it actually provides for more open park space than what is there right now and we could save the extra couple of million dollars wasted on that project. Maybe a reporter can ask him why he is incapable of doing this?

If Ely can work, it should be explored. PTech and Global Studies are very small schools within a much larger school. They are both High schools -with very clear and specific missions. The plan here is for two very similar schools with slighter different missions and goals. What’s going to happen if one school has significantly different test scores than another? Or ff one school gets certain grants and/or a more active PTO than the other school? If South Norwalk can support a stand alone public elementary school than Columbus need not be located in South Norwalk. When Columbus was created it was an urban school w/ a cross section of Norwalk residents located in a school that was closed because it lacked sufficient diversity. There was a perception that mandated busing to an inner city urban school was unworkable- Columbus offered an opportunity around that. CMS continues to be a well-loved and regarded school with a wonderfully diverse student body but the City has changed and so has the need to have a presence in South Norwalk as much as many of us have enjoyed having it here. Two schools on one property is far from an ideal situation.

What is the point of these kinds of stories? Not to give you too hard a time Nancy, but it’s kind of like when a headline describes some squabbling politician as “refuting” another.

“Refute”, FYI, means that you incontrovertibly *proved it*, not that you just contested or denied someone else’s claim.

In this case, I’m not sure who’s actually “assured” by these politicians. You may not be intending to come across like it, but it seems like you’re assuming we’re just taking them at their word, when the press’s job is precisely the opposite.

Is this idea good for the students in any possible way? It seems to me that it is good for the decision-makers who haven’t been able to resolve a problem, but I can’t understand the benefit for kids.

Why would we want 750 elementary school students to share a single campus? Can you imagine the daily traffic jams – twice a day, as parents drop off and pick up their children? Elementary parents do so in greater numbers than do parents in the middle and high schools. This will also be a problem for streets in the neighborhood.

Why would we want two schools to share a single cafeteria? What time will lunch begin and end everyday, so that all students will be able to eat? What will happen on shortened days of school, since lunch is served then, too?

Gyms and cafeterias are used for purposes other than physical education and lunch. Gyms are also used for assemblies, plays and large educational programs. They are used for the very successful after-school programs, too. Assuming that both schools are going to provide a wealth of educational and cultural experiences during and outside school hours, how will a shared gym be adequate, unless both schools cut back on their offerings? Also, how fair will it be for two schools to interrupt gym classes on a frequent basis?

Cafeterias are also used for meetings and for somewhat smaller assemblies. How will one be enough for two elementary schools?

These may seem small matters to some, but having to deal with an availability calendar for school facilities adds an unnecessary complication to school life for the educators and the parents of the schools.

Let’s think this through before making any commitments.