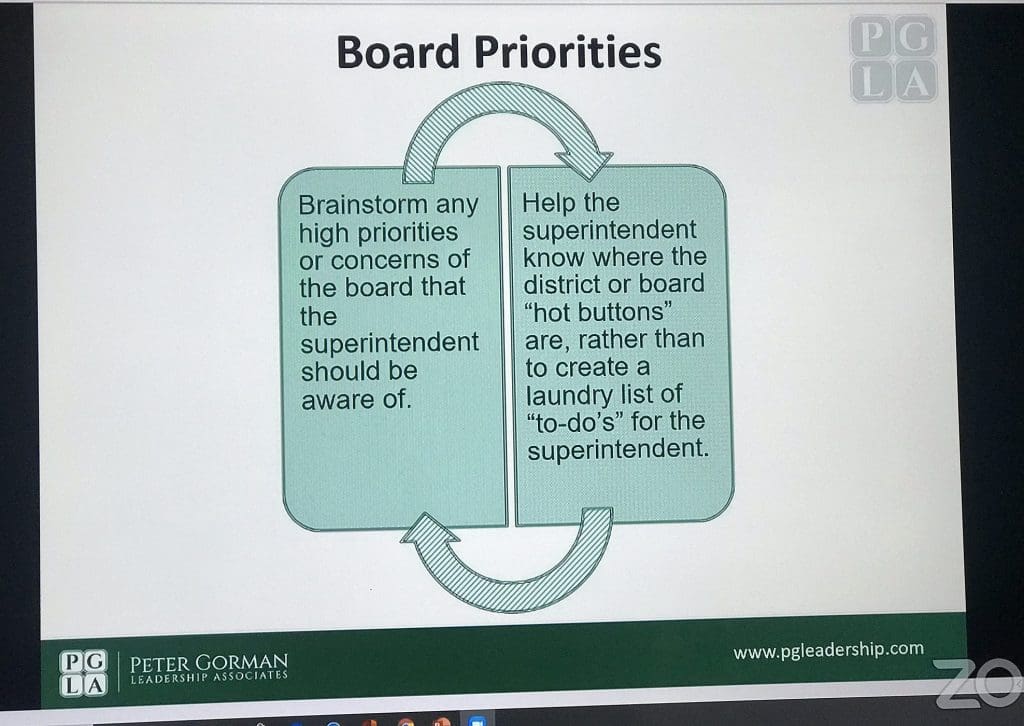 A slide from the PowerPoint presentation used Friday by Robert Avossa, Ed.D., at Friday’s Norwalk Board of Education retreat.

NORWALK, Conn. — Board of Education members took steps Friday to come up with their next strategic plan, a course for the new superintendent to steer the district by.

“You’re in a very unique position in Norwalk in that you just finished a five-year-run with a school superintendent, you have an opportunity now to really think about what, what went well, the last five years or so – and this is not about the former superintendent or the former board. This is really just about the work,” Robert Avossa, Ed. D., a consultant, said at the BoE retreat.

Avossa said he wasn’t looking for a laundry list of things that need to be done but more of “big ideas and hot button issues” to guide Norwalk Superintendent of Schools Alexandra Estrella, who began work July 1. Connected to the expected strategic operating plan is a plan for the Board to evaluate Estrella, to hold her accountable to the goals that have been set.

Estrella isn’t the only new person involved – the nine-member Board has six members serving their first term, four of them in their first year.

Heidi Keyes, a veteran, went first. Communications are important and “the big thing right now, obviously is COVID,” and parents as well as staff need to be kept abreast of developments, she said.

Godfrey Azima, a “freshman,” stressed equity work, “not only the goal of identifying proportionalities, but also really enhancing our capacity to be culturally responsive to the variation of the diversity of cultures we have in our schools.”

Avossa, former superintendent of Palm Beach County Schools in Florida, said recent research shows how “unbelievably important” it is that “youth build agency and understand how to be their own self advocate.”

Colin Hosten said it’s nearly impossible to think about a new strategic operating plan “without the context of COVID.”

“I don’t know that we can do that. When we don’t really know exactly what instructions going to look like this in the fall,” Hosten said. “…We need to over communicate. Clearly the issue of learning loss over the summer, which is always an issue is going to be really exacerbated. I fear, in some cases almost catastrophic… leads to the long longer term priority, which is the question of equity in education.”

Avossa asked him to define equity somewhat and delineate between input and outcome.

“I think we’re in a moment right now in American history where there is a threshold of awareness about different parts of American history that had been glossed over,” Hosten replied. “And, you know, I think the way that we address that if we want to be intentional about it for the next generation is to start with public education. And so I think curriculum with regards to all the different kinds of inclusive categories we talked about yesterday, not just race, but including gender, sexuality, you know, to make that actually part of the way that we teach is going to be, I think important for equity in the long term.”

“The problem is we aren’t focusing on all groups equally. And we know we have some really struggling learners and poor learners and that’s where we’re really investing a lot of our resources. But I think we don’t want to lose our diversity,” Barbis said. “And if we, you know, dumb down the gifted and talented program, and we change some sports, and we do different things, and we alienate certain groups, you’re going to start losing some of this diversity.”

Avossa said this is an issue he’s seen popping up in other areas, a concern about keeping “bright lights” engaged, “that upper middle class who do have political acumen” to help get funding.

“It’s not necessarily about race but it is, unfortunately, one of those sort of sticky situations that school districts need to grapple with,” Avossa said.

Chairwoman Sarah LeMieux called this a good segue to things she’s been thinking about.

“There are hundreds of years of inequitable decision making and outcomes in America, that as a small urban school system, you know, that’s a heavy lift for us to try and solve American history,” she said. “And that’s what we’re going to do because that we’ve decided that we’re going to work very hard in the best interests of all children.”

She explained, “I think that the metrics by which we measure and assess our success as a system have been imposed on us. And they’re not necessarily the metrics that we would choose for ourselves to assess our own success. And I think that those metrics influence – all over the country not just in Norwalk – educational practice, right? I’m talking about the idea of teaching to tests.”

Teachers, administrators and staff know they’ll be assessed by those metrics and “that takes student agency away from their own learning because they’re not allowed to be self-directed in terms of what they pursue, because if they do then they might miss another piece that’s being assessed,” LeMieux said. “… To be actually successful, in terms of the world as it will be, we’re going to need people who are curious, people who are creative problem solvers, people who can collaborate with each other, people who know how to assess and vet information.”

But, “We have a number of communities in Norwalk that sort of feel as if they’re pitted against each other for resources or attention,” she said. “…We have to somehow solve for that, too, as best we can in our budget decisions and in the way that we have conversations with people about how we’re working.”

Avossa said, “Unlike a lot of districts, I love this about what I’m hearing. I didn’t hear anyone say, I think it’s important that graduation rates go up by 10 percent, or reading go up 10 percent.”

He continued, “You guys are really, I think, in a good position to think differently about the way you approach the work, and not be driven by these outside pressures, adjust these sort of metrics that somebody came up with in the back, you know, of some political agenda that may or may not be there.”

“I feel that every board member in in their own unique way spoke about the importance of setting up structures that provided equitable access for all students to have an appropriate and well-rounded education,” Estrella said. “… A lot of what Sarah articulated resonated a lot to me, because there’s this quote, that talks about a system produces the outcomes it’s intended to produce.”

She continued, “I also concur with the idea that we are dealing with a historical perspective that has existed for decades. And it’s not something that we’re going to fix overnight, although like, I think all members of the board, articulate it. It’s something that we will do, and we can do, but we have to be very thoughtful in terms of the approach that we take to move forward in doing that work.”

Is the term “back to basics” to difficult a concept to grasp? I agree with Mike Barbis regarding maintaining high standards for honors programs.
Regarding equity.Considering Norwalk schools are only 25% white,
I find those comments amusing and misguided. Why not challenge these kids? They’ll be happier and so will we..Holy Cow.
Lastly, many progressive’s have been pushing police transparency. I think we need more teacher transparency. Like the police there are many good teachers. Like the police there are a number of bad teachers and administrators. They need to be booted. The union and their policies are keeping this from happening. Happy Monday