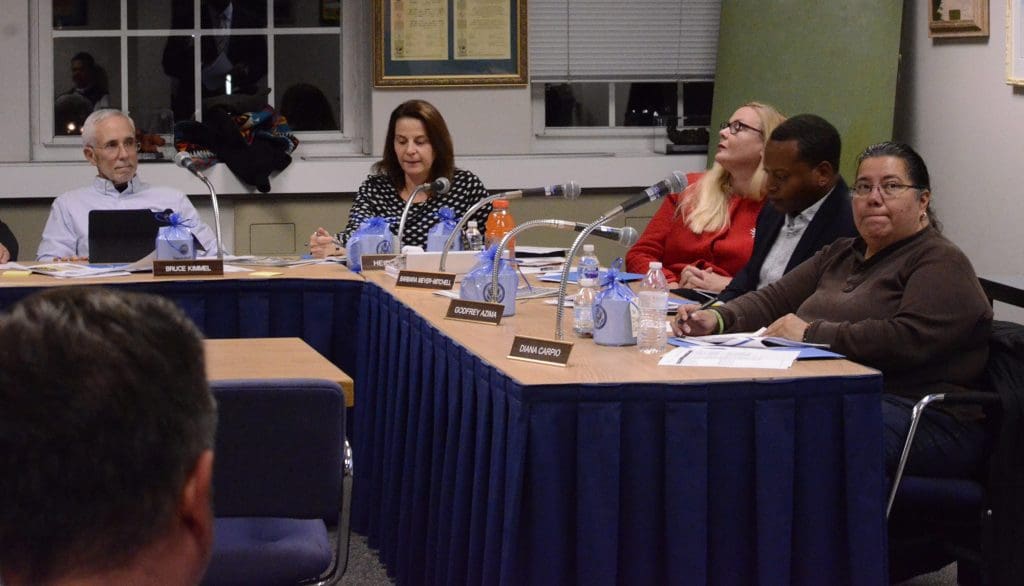 New Board of Education members joined the club early, sitting with sworn in BoE members on Nov. 12 to learn about social and emotional learning.

NORWALK – The notion that empathy, cooperation, self-awareness and similar life skills can count for as much as IQ in predicting workplace success was a radical concept when it emerged in the mid-1990s.

Small wonder that Norwalk Public Schools are establishing their own SEL programs, as Chief Academic Officer Brenda Myers informed the Board of Education last week, in a presentation on its benefits and challenges.

“Social emotional learning is the process by which children and adults acquire and effectively apply the knowledge, attitudes, and skills necessary to understand and manage emotions, set and achieve positive goals, feel and show empathy for others, establish and maintain positive relationships, and make responsible decisions,” Myers said.

While educators have long known that children perform better in a nurturing, supportive environment, the belief that managing emotions, resolving conflicts, and making wise decisions should be taught alongside traditional subject areas is relatively new.

Among SEL’s primary objectives: To build healthy emotional relationships among students and faculty to help prevent or repair emotional trauma by allowing all parties to express thoughts and feelings when conflicts arise.

Successful resolution hinges on everyone’s willingness to learn SEL’s restorative practices. That may prove more difficult for staff than for students, outgoing Board member Julie Corbett pointed out, since teachers might first need to unlearn decades of previous communication proclivities.

Norwalk Public Schools Chief of School Operations Frank Costanza acknowledged the “counter-argument out there that social and emotional learning isn’t valuable, and that there isn’t hard data to support what it can do on a positive level.”

On the contrary, he said, citing a meta-analysis of 213 studies involving 270,000 students that showed it “absolutely links to student learning gains in a variety of areas.”

The World Economic Forum rates SEL skills such as group collaboration and self-regulation higher than students’ ability to achieve a certain level of proficiency on standardized tests, Costanzo said. In fact, academic performance among students who participated in SEL interventions increased by 11 percentile points compared with students who did not.

Joining Costanzo and Myers at Tuesday’s presentation were representatives of Norwalk schools where SEL is already being used. One, LaShante James, assistant principal of Roton Middle School, defined restorative practice as “a philosophy” that requires “a shift in mindset.”

“It’s just switching the way you say something. Instead of accusing someone and pointing your finger, you’re saying, ‘I felt disrespected by that comment, and I thought we agreed to honor respect in this space.’ You’re not pointing your finger at the person, you’re acknowledging that the action broke the relationship.”

Restorative practices also help teachers when conflicts arise between students, James said. Such interventions allow all parties to articulate their thoughts and feelings, often crucial for young students struggling to navigate classroom and relationship problems. While SEL strategies take time to learn, James said, his staff is “very open to it.”

Another platform, rethinkED, is being used to train Registered Behavior Therapists in the district, as well as to identify students’ moods by having them associate their energy levels and emotions by color, Chief of Specialized Learning and Student Services Yvette Goorevitch said.

In the workshop that followed the presentation, parent and social worker M.J. Chirona described herself as “very passionate” about SEL and said “it has been wonderful over the past four years to see every school focusing on social and emotional learning.”

Superintendent of Schools Steven J. Adamowski directed board members to write SEL into policy and to seek community partners for future initiatives. The program’s effectiveness will be measured and tracked as education officials build the program into NPS’s Strategic Operating Plan.

This is not new for NPS. There is no one left with a knowledge of past history, so every thought that is presented now is presented as new.In the past, students were taught peer mediation, for one. I don’t remember the name of the program, but ethical and social values were promoted as well. There is past history. If you wish to recreate or expand on it, at least give those who worked diligently on those programs some credit.

Sounds like a program the BOE members should attend.

This is very good news–at last, recognizing the impact of emotions on one’s life, whether a school child or teacher (counselor, school administrator, therapist, etc.) and how it plays out in academic achievement.

Goleman’s contributions (1995) are not where NPS should stop looking. Before getting too “pie-eyed” and employing Goleman’s theories/practices, which are outdated and incomplete, I recommend that the BoE study the new work below.

In the 2019 work”Mindfulness and Its Discontents: Education, Self, and Social Transformation” by Brooklyn College/CUNY professor of school counseling David Forbes says, “The term ’emotional intelligence’ in Goleman’s in 1995 eponymous bestseller became popular as society shifted from an industrial to a service economy and emotional work became a desired skill of corporate management. Empathy, managing one’s emotions, and getting along with others were seen as skills that could lead to a successful career and more profitable businesses.”

Forbes’, with a background in Buddhist meditation, sets forth the observation that even though mindfulness and other counseling techniques can help reduce stress, increase emotional self-awareness, or improve relationships, they merely keep students and employees on the same track of following rules, not questioning authority, and staying put within “the system.”

The main concern: Do we help students just enough to keep them in obedience to our materialistic, consumerist, money-centric system, or allow the full flowering of our young people to transform not only themselves, but their society? Seems Goleman and some of the theories out there have a low ceiling and I highly recommend reading this new book–it lifts the roof higher.

Many European countries criticize our public school emphasis on tests and homework, and instead teach their school children how to have a happy life. I feel we need a transformation in our society toward this model and hope BoE members are open to discovering what might lead school kids (and us adults) to have a happy life.

Listing ‘increased scores on standardized tests” as an outcome says so very much about how little NPS Central Office understands about SEL.