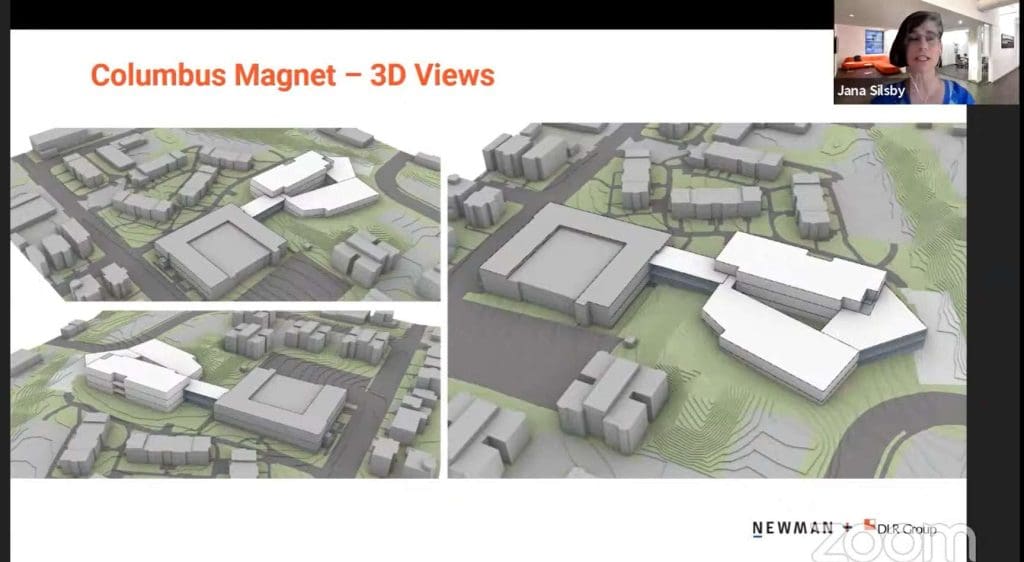 Jana Silsby of DLR Group presents a new plan for the Columbus School site at Tuesday’s Board of Education meeting. A new school is shown in white and the existing building is grey. Connecting the two would allow them to share public spaces.

NORWALK, Conn. — A radically different concept for South Norwalk school construction was unveiled Tuesday by Norwalk Superintendent of Schools Alexandra Estrella. This might mean sending a new application to the State by June 30.

Two schools would be squeezed onto the 3.5-acre Chestnut Street site, one for Columbus Magnet School and the other a neighborhood elementary school, in the rough concept. The new Columbus would face Henry Street. The existing building would be used for a neighborhood K-5 school.

“This is an opportunity for us to kind of engage in some creative thinking, and how we utilize the current building that we have, as well as some of the available space to potentially create a South Norwalk school, as well as provide CMS with the new building that has been in discussion for some time,” Estrella said.

It’s a big switch from the approved plan, designed under then-BoE Facilities Committee Chairman Mike Barbis, to build a new school on the Nathaniel Ely site and then renovate the existing Columbus building. That plan hasn’t gotten off the ground due to objections from some South Norwalk leaders to a public land swap that must be approved by the Connecticut Department of Energy and Environmental Protection (DEEP).

Norwalk is “at a standstill” with DEEP and in trying to acquire new property, BoE member Erica DePalma said, characterizing the new ideas as an attempt to “get a building out there as fast as possible” to provide “a local school in South Norwalk.”

“I actually don’t want it to sound as if we’re only looking at this because a better option was not available,” BoE Chairman Colin Hosten said. The idea is to “do it in a way that does not compromise on anything.”

DLR Group, in conjunction with Newman architects, has been working on a facilities plan for Norwalk Public Schools.

“One of the things that we’ve been looking at is at these two projects that have been in the queue for some time, and we have come forward with some concepts that we would like to present to the board,” Estrella said.

In “just a conceptual idea,” renderings that “definitely should not be construed as a fully baked design,” Jana Silsby of DLR presented three options for the Chestnut Street site, all of them with a new building fronting Henry Street. The options got bigger as she went along. All of them feature outdoor play area on the roof of the new building, an idea that takes advantage of the site’s steep grade change.

“We get to actually sweep that landscape up onto the roof of that building… it would be really magical,” Silsby said.

The most modest plan would put 564 children into the new building, “good cohort of middle school students, as well as a really robust cohort of that pre-K through five students.” The existing building would not be expanded.

The second option would put expand the existing building into half of the existing parking lot and use underground space for parking. The addition would feature a cafetorium, kitchen, four classrooms and an art room.

All of this depends on the demographic work being developed by the consultants, expected to be complete by May, Estrella said. “Depending on the final numbers in terms of the 10-year projection of enrollment within the district, that will also impact the need and the size of the schools as well as the … funding available to engage in these projects.”

DePalma referred to it as “fantastic” but asked about the traffic on the site.

The neighborhood school would have its entrance on Chestnut Street and Columbus would operate off Henry Street, and their comings and goings won’t be done simultaneously, Estrella said.

Silsby presented different options for a Columbus bus loop and pointed out that the existing building doesn’t have one now. Instead, a driveway for neighboring housing is used and that will have to be a conversation, she said.

“It is an urban site, there’s no doubt about it,” Silsby said. “And it may, it will definitely be different from what other sites around Norwalk has experienced. But it is consistent with other urban architecture and other urban schools, that, you know, myself, my colleagues at DLR, and colleagues at Newman architects have done elsewhere, you know, in New England, as well as you know, in other parts of, in other major cities around the country.”

If there were funding, staff parking could be provided under the building, she said. BoE member Sherelle Harris observed that many neighborhood children would walk to their school.

“Basically you’re going to have at least 850 kids there, possibly more, on a three acre site,” he said. “I  know it’s an urban district. That’s a lot. I mean, compared to New York City, obviously, it’s, you know, that’s nothing. But for Norwalk, that would be very, very different from any of our other schools…. that’s a lot of kids in a very small amount of space with limited recreation areas.”

There are different options for the roof space, it might be turf or it might be hardscape, Silsby said. But, “You’re absolutely right, you would not have a large multi-use field, like a soccer field, or softball field or a little league field, that won’t fit on the site.”

She did a 840-student school on a similar sized site in Cambridge, Mass., she said.

“Cambridge actually is a really interesting school district that is not that different, has a lot of similarities to Norwalk,” but, “Cambridge is all urban, which we are not,” Barbis said.

“I just wonder, you know, as we focus on equity, is it equitable to be sending a bunch, you know, I mean, 900 kids on a three-acre campus, and then 900 kids on a 25 acre campus (elsewhere)? I just wonder, for all the people, we’re making a lot of noise about equity, is that really equitable? And not to have any outdoor space,” Barbis said. “I understand you’re…. doing a brilliant job and being creative, trying to use this three acres and putting students there. I mean, it’s impressive. But for kids not to have a blade of grass. I just wonder if that’s the, the approach we should be looking at as we consider different options.”

“Equity in my mind is certainly much different than parity,” she said, suggesting that the “ability for students to easily get to the school, within a walking kind of context is something that we hear about a lot, a lot more these days.”

“There’s benefits, obviously to getting kids in really great seats in a good school that they could walk to as soon as possible for sure,” LeMieux said. “And it’s going to be a logistical puzzle that I’m sure it can be solved to figure out traffic patterns and buses and space and where kids can play and stuff like that. So I just would say, to sum all of that up, that I would exhort everybody to think about it as holistically as possible.”

“I love that there’s a different vision for a school, a school that’s going to help a lot of children in South Norwalk, a lot of families in South Norwalk. And I just, you know, want to let everybody know, to at least have an open mind,” Carpio said.

“The City is totally committed to a South Norwalk school, to the fact that we’ve allocated, or put, almost $80 million towards the process,” Rilling said. “It’s unfortunate that the Ely Avenue site did not work. There are some other things that we’re looking at. But the number one most important thing is that we do as quickly as we humanly can, making sure we get all the things in order that we move towards a South Norwalk school.”

As a parent of a current CMS 5th grader I don’t see this plan (or plans) as viable. Not enough parking not enough outdoor space not enough room for traffic flow. Could some or all of these obstacles be overcome with an unlimited budget – yes. But the design will have to be based on state reimbursement requirements and the state ain’t paying for multi level parking decks and tiered rooftop green play areas.

That’s blasphemous. Outright disaster for the children of Norwalk. Where is the yard for children to move in the back?! You gotta be kidding me.

Who profits from the Ely school not being built? The plans laid out more park space than what is there. Isn’t anyone the least bit curious as to why our state legislator and state senator pulled the plug on this? Who profits from that area being run down? Why can’t either one of them articulate how more park space than what is there is bad for the area? Ask them why they think it better serves residents as an unused area of prickers and used appliances and whatever garbage gets thrown in there? Or are we only allowed to pretend they actually care about the citizens who live there?

Clearly there is a lack of leadership in Norwalk CT. Between town halls being closed, this plan that I can’t even believe is an idea (kids having recess on a roof in a area where they are knocking down and building apartments like crazy) a High School being built that most taxpayers don’t support and Common Council members thinking that it is okay for them to not provide clean and modern bathrooms to our kids.