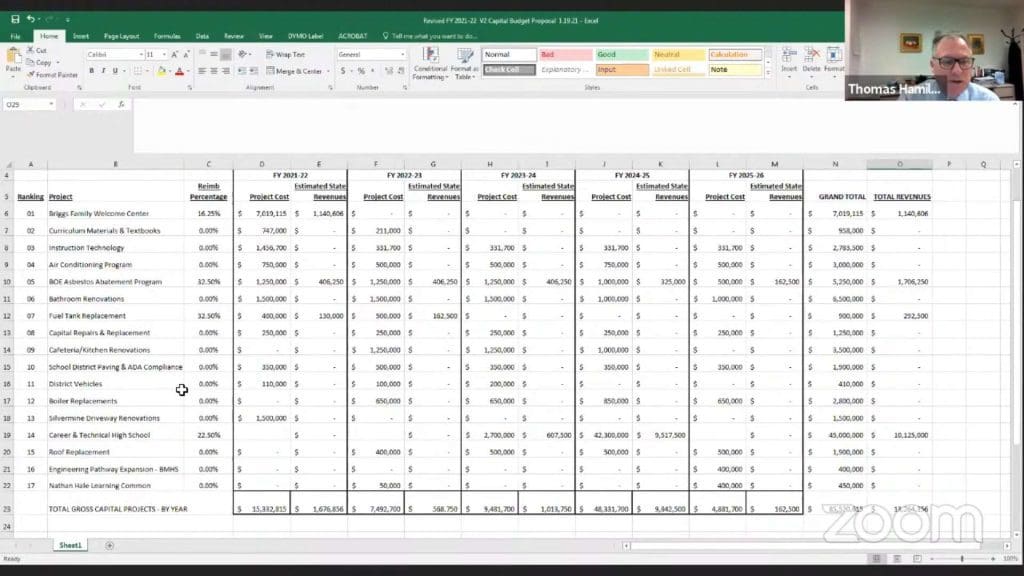 NORWALK, Conn. — There’s hope that the Silvemine Elementary School driveway will be refashioned sooner than has recently been stated. Similarly, school bathrooms have moved up the list.

Norwalk Board of Education members on Tuesday amended Norwalk Superintendent of Schools Alexandra Estrella’s recommended capital budget before unanimously approving it to send it along in the process. They also approved the recommended operating budget, focusing on magnet school funding cuts in response to parent concerns.

“In the past the (magnet school) funding was allotted without clear goals and expectations,” and “we have a responsibility to the community and the taxpayers … to run our schools effectively, that we set funding aside with clear construct validity metrics,” Estrella commented.

The capital budget amendments include reversing the delay of the Silvermine Driveway. Last year, it was expected that it would be done in 2021 but as there’s been no progress made on design due to COVID-19 the new plan was to complete the $1.5 million project in 2023. If the amended request is approved, the driveway would be done in 2022.

Bathroom renovations, a capital budget expenditure that wasn’t planned last year, were proposed at $500,000 a year for the next five years. The amended request is to spend $1.5 million a year for three years and then $1 million in 2024-25 and 2025-26.

The resultant capital budget request is for $15.3 million in 2021-22, less a projected $1.6 million in State reimbursements, which makes it close to the $13 million request talked about two weeks ago. This includes $7 million for a Briggs Welcome Center.

“Of course, we know these numbers will be reviewed by other entities in the city,” Norwalk Board of Education Chairman Colin Hosten said. “And we also know … that some of these expenditures will be subject to the literal capabilities to actually fund them on the City-side. So we’ll cross our fingers and toes again.”

“This Board is aware Silvermine is one of our two largest elementary schools,” Board of Education member Erica DePalma said. “That driveway was not meant to accommodate the number of cars and buses that are moving through the school each morning and afternoon; members of this Board as well as the Common Council have visited the site and seen the danger firsthand, to our students, as a result of the configuration of that driveway. It forces children across traffic to get into school, in some instances on some days it forces cars to a standstill on Perry Avenue and Yew Street. Kids have to jump out of the car and cross the main road. It’s caused car accidents on Perry Avenue.”

Her mother-in-law was in a car accident because of the driveway, she said.

“I was at the Planning Commission hearing where over 100 parents turned out to talk about how unsafe,” Board of Education Facilities Committee Chairwoman Barbara Meyer-Mitchell said. “That was last year. And I know it’s a priority, especially because it’s a magnet school. It is bringing in so much more bus and car traffic than it did when it was served as a neighborhood school.”

“I want to thank my colleague (former Facilities Committee Chairman Mike Barbis) for his work to move us forward in addressing some of the restrooms, but we have such a backlog of work in that area, that if we only did one school a year, we wouldn’t finish till most of these cohorts were graduated a graduating seniors,” Meyer-Mitchells said.

“In this moment in time, we’re putting so much emphasis on the importance of hand washing in hygiene, delaying the bathrooms in my opinion, signals that we aren’t following through on our part,” DePalma said. “And we know that children and their parents have expressed that our bathrooms are in such a state that many children just hold it all day long and that is a uncomfortable and unnecessary distraction, in my opinion, when they are trying to access their education. It certainly does not lend itself to more frequent hand washing as per the CDC and the Norwalk Health Department.”

Meyer-Mitchell described the amendment as “doing three schools per year for the next three to four years.”

“Parents have sent us pictures: missing sinks, no door on stall, the toilet in disrepair,” she said. “Tile damage, potentially with asbestos exposed. We have a significant challenge and I think we also have an opportunity here to examine hand washing practices and how many sinks we want to have to allow for efficient hand washing, if, if we have this kind of health crisis as a part of our culture ongoingly. I’m personally hoping that we can resolve this and move forward to some kind of normalcy. But we should plan for both contingencies.”

“One of the arguments for accelerating some of these programs is the fact that we have historically low interest rates and that we can bond at a rate that may not be guaranteed in the future,” Meyer-Mitchell said. “I know that we had a President for four years, who was a developer, who worked very hard to urge the Fed to keep rates low. I don’t know that we can guarantee that that will continue. And to me it makes very good financial sense if we’re going to be paying this over 30 years, starting this year or next year even thereafter, to go ahead and bond it, complete the work, let our families enjoy the benefit of the improved buildings, and hopefully reap the benefit also of low interest rates that we would not enjoy if we waited.”

NPS Chief Financial Officer Thomas Hamilton had calculated possible reimbursements at Meyer-Mitchell’s request, factoring in $1.1 million for the $7 million Briggs project, as well as $406,250 for asbestos abatement and $162,500 for fuel tank replacement, figures that weren’t in the recommended request. That dropped the request to $13.7 million.

“Again, we can’t do it all at once we know that we want to be very cognizant of the economic realities, but we also want to be cognizant of our role as a board to support learning in a safe and productive way,” Hosten said.

“There are many issues with this plan,” he said. “The process to register, welcome and admit a student could be streamlined and improved through a reconfiguration of the process, and use of space in central office. Simply put, a $7 million price tag could be better spent on some of the other projects throughout this district.”

Then- Norwalk Superintendent of Schools Steven Adamowski asked for and received $1.2 million in the 2017-18 budget to provide support for intra-district magnet schools, which he said were underfunded and unable to offer the programs for which they were designed. This provided a $1,000 per student allocation to the school.

Estrella seeks to reverse that. Meyer-Mitchell said families have reached out with concerns about that.

“We have set aside $1 million to cover the costs of the, particularly staffing associated with the magnet programs,” Estrella said, explaining that NPS will scrutinize the spending.

NPS will also “really look at the amount of students that are coming from neighboring districts, into the school as one of the main criterias because at the fundamental level a magnet program is a program that brings in students from neighboring communities,” Estrella said.

Transportation will be scrutinized to “give students the opportunity from other neighboring districts to come,” she said. And, “We will be working with the principals within the next few weeks… one on one conversations with them in terms of their priorities, and then utilize that the tool that will decide the amount of resources being allotted to every school.”

“I think it’s also good to remember that some of our magnet funding was covering the salaries for math literacy specialists, which now will be covered through the central office curriculum budget,” Meyer-Mitchell said. “S so that frees up room within the school-based budget or the magnet allocation, and hopefully will alleviate any of those concerns for community members.”

If I didn’t know better I would think today is April 1st..

I understand the Board spent a lot of time on this and I thank them for their service. However, this is a joke and should be treated as such by the Common Council.

This budget was passed very quickly with everyone focusing on the nearly flat budget and not paying attention to some sweeping changes. Reducing magnet funding by $1.5 million is going to have a huge impact on schools and no one asked any questions about what the plan is. Parents and staff were just told that it’s being “redesigned” to support equity. How? Talk about pulling the rug out from under schools. And centralizing specialists from downtown isn’t doing to help build any school relationships or improve performance. Put coaches in all the schools to improve Tier 1 instruction.

I get the sense our new superintendent wants to homogenize our school system, take away anything that makes our individual schools unique, and make it all cookie cutter. All in the name of “equity.” This is not how equity works. She’s going to drive away great talent in our schools with these plans.

Shame on the BOE for simply accepting this with no real challenge. They seem to think they work for the superintendent, not the people of Norwalk.