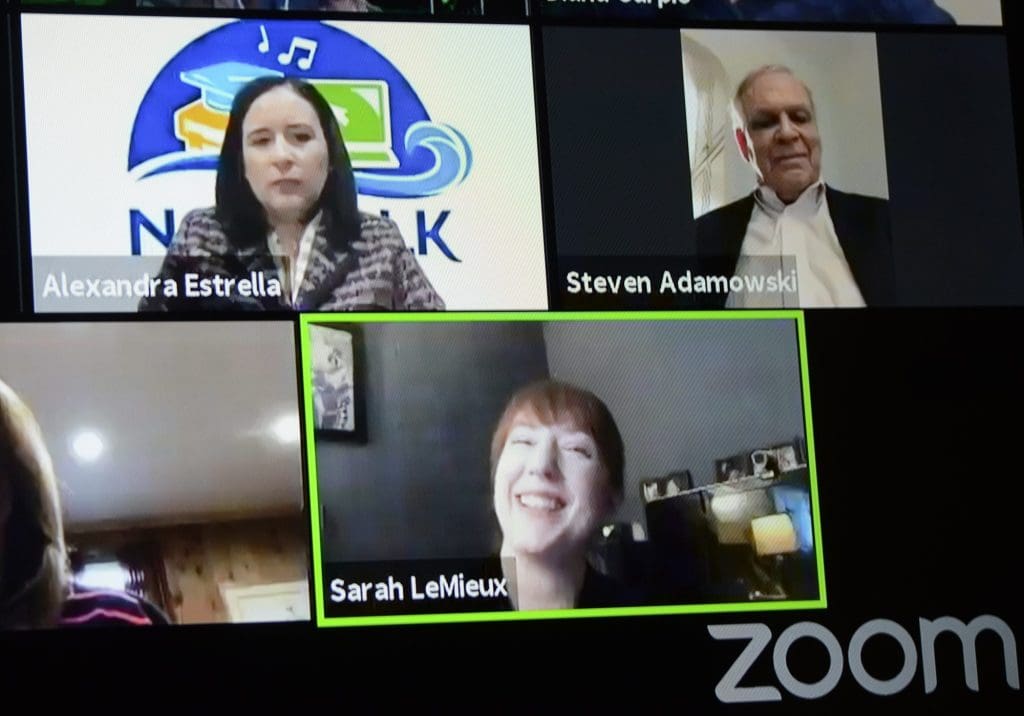 NORWALK, Conn. — Alexandra Estrella made her debut Thursday as the new NPS Superintendent of Schools in a way that was poignantly unique.

Estrella’s appointment was approved unanimously by the Board of Education in a virtual meeting, only accessible to the public via YouTube due to the COVID-19 pandemic, with just one member sharing a hint of reservation about the choice. Estrella, a Latina whose education career has been in New York City until this point, immediately used the odd occasion as an indication of the challenges for all involved.

“Like you, I believe in providing all children and outstanding education that will prepare them for the future that is yet to be imagined. What we’re going through is a perfect example of that,” she said.

Only one Board member indicated reservations about the choice. Sherelle Harris said she was voting “80 percent” in unison with her colleagues, hoping that her “20 percent apprehension will be proven wrong.”

“I was not totally satisfied with the company or the process. So, I will leave that to a to a private discussion,” Harris said. “And basically, my biggest concern is the divide that I’ve seen, and then I’m hoping that this is not going to be further divided, or politics as usual.”

Board Chairwoman Sarah Lemieux said she “couldn’t be happier” with the choice, and Board member Godfrey Azima said “there’s no question” that he is in favor of Estrella.

A smattering of public speakers welcomed Estrella at the outset of the meeting, including Norwalk Federation of Teachers President Mary Yordon.

Estrella will replace Norwalk Superintendent of Schools Steven Adamowski, who is retiring after serving out a five year contract, on July 1.

‘No super will be popular with everyone’

Reactions to the appointment have generally been positive on the parents’ Facebook page.

“This is amazing. A strong minority female leader. Exactly what we need. Welcome to Norwalk, Dr. Estrella,” the first person said.

“Wow!! We just won Lotto!! This is amazing. 👏” another said shortly thereafter.

Estrella has been with the New York City Department of Education for nearly 20 years, serving as a school principal from September 2008 to September 2013 and then as a community school superintendent, according to her Linked In page.

She oversaw District Four in East Harlem, with 23 schools and 13,500 students grades pre-K through high school, according to Norwalk Public Schools.

“During the 2019-2020 academic school year, she received three proclamations from community legislative officials highlighting her relentless commitment to improving the lives of children and families in the East Harlem community,” the NPS bio states.

Under Estrella’s leadership, District Four increased its New York State English Language Arts scores by 22 percent and mathematics scores by 20 percent, according to NPS. “In partnership with Hunter College, she acquired a multimillion-dollar grant from New York Trust that allowed the district to establish an intensive early childhood literacy intervention program that propelled State scores by 18%. Graduation rates have increased from 70% to 84%.”

Yet, “there are some scary articles about her!!!! Here we go again!!!!” one parent wrote on the parents page.

A Google search turns up Don’t Tread on Educators in the second slot. The blog claims Estrella “bullies teachers, parents, and appoints corrupt and ineffective principals.”

Chaz’s School Daze, an education blog that claims to not be tied to union politics, asserts that Estrella shouldn’t be a superintendent. The blog confuses Estrella’s name and points out that she was fined $3,000 by the City’s Conflict of Interest Board in 2017, for selling a home to a teacher who worked for her. 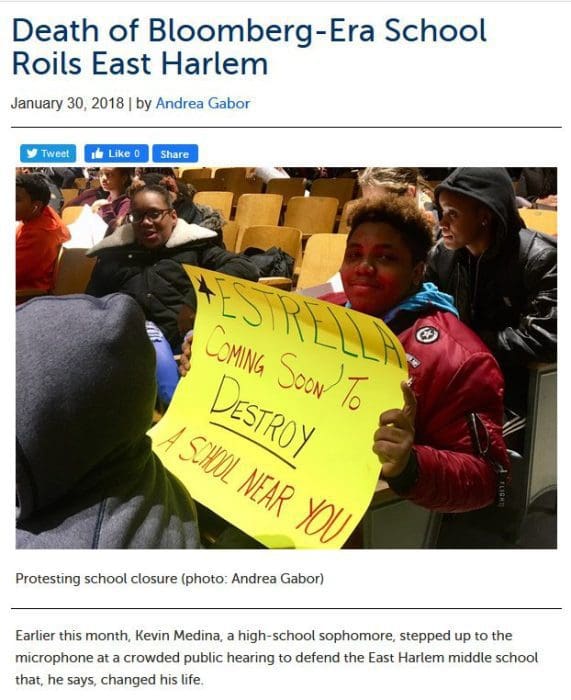 A Gotham Gazette story from January 2018.

Also in 2016, some parents alleged that Estrella avoided getting the community’s input on a new school principal.

More recently, Estrella took heat in 2018 over the closing of a school. Estrella forced out the school’s principal and then most of the teachers took jobs elsewhere, the Gotham Gazette reports. The school was merged into a school – they had shared a building – and its principal was also replaced.

The criticism on the Norwalk Parents page didn’t faze most parents.

“In all sincerity , no superintendent is going to be popular with everyone. I don’t know Dr. Estrella but the ‘articles’ are primarily opinion pieces where people were unhappy with her decisions (I.e. closing a school),” came a reply. “… the negative press doesn’t convince me that she is necessarily a terrible future superintendent for our district. You won’t find a single candidate who is a superintendent who doesn’t have some level of negative press.”

“This woman was so great in her area of expertise what is she coming to Norwalk Connecticut for? Maybe because New York no longer wants her!” another critic said.

Others lauded Estrella’s success in obtaining grant funding, and forming partnerships with Apple and Verizon.

“If we don’t want to have a budget fight every other year, we need private industry stepping in. It’s going to be a tough start post coronavirus, but if she can exploit those relationships, that could be a gamechanger,” one father wrote. “Also, I am told she is politically savvy. We talk about the distrust and steamrolling of some of the other admins we’ve had, maybe a shrewd, strong woman is just the ticket. If her interests are in line with success for our students, then some kicking ass and taking names might be welcome.”

“I think she is going to be a wonderful asset to this community,” Penn-Williams said Wednesday.

‘I believe in your vision’

In English, she said, “I’m a mother, a wife, an educator that firmly believes in the value of education and the development of the whole child, someone who is a testament to what education can do for a child.”

Her parents were uneducated immigrants from the Dominican Republic who “instilled very early on in me, love and passion for education,” Estrella said. “It took a village of teachers and educators to support me through that path to ensure that I am where I am today, as somebody coming into the system not knowing English, and having amazing teachers like … my fifth grade teacher who transformed my life.”

“I believe in what you say when you say that you care about children,” she said. “… I believe in your vision. I believe in your values. I believe that you want like myself to further the success of our children…. I’m really excited about the work ahead. I know that there’s many challenges with the current budgetary situation, but it will open the doors to a lot of creativity.”

Just Google her name and you’ll see all the problems she’s had in her past with principals, teachers, and students.
Of course, Norwalk takes Central Office administrators that have hurt other districts. Typical Norwalk!
It’s clear Norwalk was looking for a “type,” and now they’ve got it!

Can Sherelle Harris explain what she meant by her comments? She clearly had something specific in mind but it wasn’t clear what that might have been.

District 4 was fortunate to have Dr. Estrella as a leader, who passionately and strategically shared her vision of teaching the whole child. This was done by providing proper guidance for principles who shaped the style of teaching within educators that would ultimately fulfill her vision. Her vision became our vision. The vision of District 4!
In an effort to assure this was done with accuracy she embraced teachers with years of experience as well as welcomed in new teachers such as myself to embark and persevere on a journey of both teaching and learning to better meet the needs of our students. I am lucky to be teaching in a school that brings her vision, the vision of District 4, our vision, to life. As a special education teacher in a dual language /ICT classroom I witnessed first hand the closing of the gap of disproportionality amongst not just students with disabilities, but students who are English Language Learners as well. The emphasis that Dr.Estrella put forth in regard to Advanced Literacy is evidence of this closing. Providing ALL students with an equal opportunity to develop the skills necessary to be competent in reading, writing and speaking is how we set students up for success and college readiness. To go beyond that, these skills prepare students for our ever changing society and economy.
Although we will truly miss Dr.Estrella, especially at BBMS! (HOOT! HOOT!) I speak for our staff in sharing our appreciation of her support and her authenticity. She has instilled in all of us the value of teaching the whole child as educators and as a community. Putting students first, in all that we do as educators, is what she has fostered throughout District 4.
This is a huge opportunity for her, but even more for the educators, parents and students of Norwalk!

Since so many NPS Superintendents have come and gone so quickly I can’t conclude they make any difference in the education of young minds or contribute to any cultural education and the traditions of our amazing country and, in fact, probably add to the massive confusion of our educational productivity that exists not only here but for many, many places in the whole nation.

It appears the Board has appointed an accomplished, thoughtful, and informed education leader whose record demonstrates she can address the needs of a diverse, and growing urban/suburban school district. Relative to the first comment – what do you mean by ‘type.’

They wanted a female minority, and they’ve got it.
Curious, why would she leave her current position for this one? Is it considered an “upward” move?

Just another political hack with better pay,benefits and pension. Sometimes your wishes can be another person’s nightmare.

1-30-18
“Last spring, Alexandra Estrella, the District 4 superintendent, forced out Global Tech’s principal, David Baiz. She also rejected every teacher-tenure application Baiz had approved. In the wake of Baiz’s departure, all but two of Global Tech’s 16 full-time faculty took jobs at other schools—though most returned for the hearings, sporting t-shirts inscribed “Greatness that Perseveres” and “GTP Forever.”
…Estrella also replaced P.S. 7’s principal, Jackie Pryce-Harvey, who had helped found Global Tech. After Pryce-Harvey’s departure, some special programs there also disappeared. Indeed, at one point, Baiz and Pryce-Harvey had suggested merging P.S. 7’s middle school with Global Tech, under Baiz’s leadership; but the idea was rejected by Estrella.”

Dr. Estrella has been a passionate advocate for success for all students in District 4! She keeps a close eye on issues of overrepresentation and disproportionality in Special Education by engaging members of all school communities in the conversation. Her belief that ALL students are able to achieve high expectations through targeted instructions and support is apparent in her focused initiatives and use of data to monitor implementation. She keeps children at the center of the conversation – which guided our work together in every aspect of examining the special education process. The children in your district will benefit from her attention to equity and access for all students.

Google, so what she happens to be a female/minority. Do you have a problem with that? Given, the district, for the most part, has had white males for superintendents, did you ever question that?