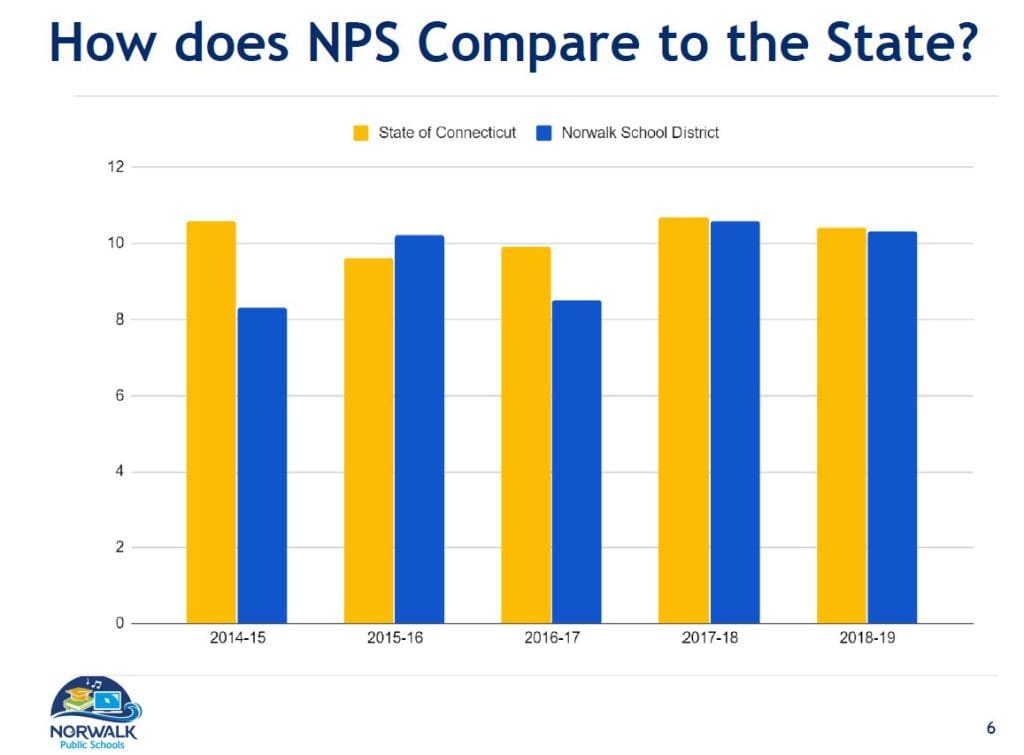 NORWALK, Conn. — Norwalk’s school system is on pace with the state when it comes to chronic absenteeism, but “we still have some ways to go” in efforts to curb the problem, NPS Director of School Improvement Sandra Faioes said.

“We have been able to reduce it from 10.6 percent last year to 10.3 percent this year, but I want you to keep in mind that our demographic keeps changing, and we do end up having a population that typically suffers from greater absenteeism. So, in us being able to reduce it at all is a major feat for our district,” Faioes said Tuesday to the Board of Education.

Absenteeism went up overall during the distance learning period, primarily because of the rates among older students, she said.
Reducing the chronic absenteeism rate is a goal of the strategic operating plan, and, “We have done fairly well this area over the last several years,” Norwalk Superintendent of Schools Steven Adamowski said.

The State’s Next Generation Accountability Assessments target absenteeism and that’s “is critical for us” because NPS can improve the score, Faioes said.

Chronic absence is defined as missing 10 percent or more of school for reasons including excused, unexcused and disciplinary absences, she explained.

“Now, chronic absence versus truancy, it’s important for us to see that these terms are not interchangeable,” Faioes said. “When we measure chronic absenteeism, we’re talking all absences versus truancy. Typically, we refer to students that are truant that have unexcused absences.”

Plus, the chronic absenteeism rate changes over time, as it’s 10 percent of the school days, Faioes continued. Norwalk Public Schools has a ways to go before hitting the Every Student Succeeds Act (ESSA) target of 7.7 percent.

Norwalk’s chronic absentee numbers have gone up from the 2014-15 school year while the state’s have remained in the same ballpark, Faioes said. “However, our demographics have changed significantly and at a much faster rate, than the state.” 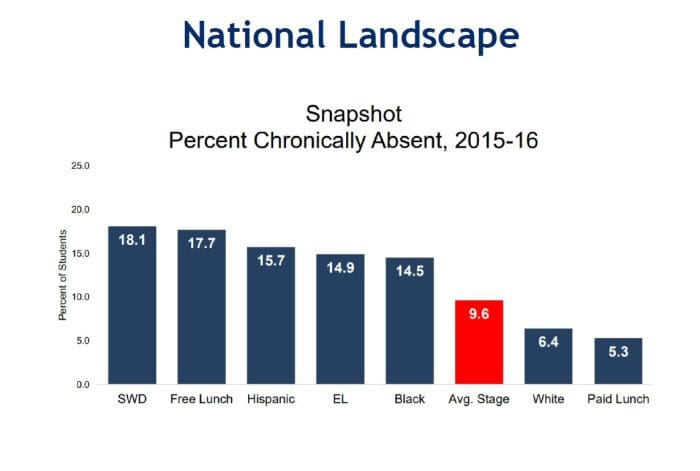 But there’s a surprise: “Even though Hispanic students may experience higher rates of absenteeism, if you are receiving ELL services or you’re classified as ELL, you tend to have better attendance.”

SpEd students are more likely to be absent as well, according to Faioes.

“Most alarming is the overwhelming majority of students that are absent are also dealing with poverty and dealing with these daily stresses,” Faioes said. “Caring for siblings, high rates of disease, frequent moves to find employment, all contribute to this.”

Absenteeism increased sharply at the middle schools during the distance learning period, especially at Ponus Ridge Middle School, she said. Both high schools were up, with Norwalk High School/P-Tech reaching about 25 percent.

“There’s some students that didn’t have devices at certain schools during distance learning that had a really great attendance rate, while others that were in the same predicament had higher levels of absenteeism. So we’re noticing that it’s not it’s not as predictable as we would have thought in our district, because there are schools that are doing remarkably well, even under the same conditions,” Faioes said, in response to a question from Board member Erica DePalma.

“The damage that chronic absenteeism does to a child’s learning is well documented in research that’s been connected to higher dropout rate,” Faoies said. “It’s been connected to learning loss, and the inability to be on grade level at the grade three reading benchmark. So there are many reasons why this continues to be a priority. And we need to leverage the school improvement plans to make sure that we’re creating actionable plans to implement the strategies to improve our attendance.”

Board of Education member Barbara Meyer-Mitchell suggested an emphasis on getting to the root causes of absenteeism. For instance, maybe the school district could find a partner through Norwalk ACTS that would send a van around to pick up kids who miss the bus, at no expense to the City.

“I will keep digging in the data,” Faioes said. “So there’s a lot to uncover, and I will gladly share it with our partners.”

Board of Education Chairwoman Sarah LeMieux observed that the approach to absenteeism was different during the regular school year and the distance learning period. If her daughter were absent before COVID-19, the family would get a robocall but during distance learning, “teachers were emailing and it was coming from a place of real kindness and concern if my daughter missed something.”

“I am wondering if we could put in our minds an attempt to approach it from sort of like a restorative practice perspective, so that instead of being punitive about absence, that we look for root causes and that we treat it educationally rather than having there be punitive consequences to the child’s for being absent,” LeMieux said.

The longer the students were out of school, the worse the attendance got, Faioes said. “I think, it’s sort of I’m guessing, that goes with what you’re saying, in terms of just people getting more stressed out, families possibly facing having to move or facing other things, I think that impacted our students.” 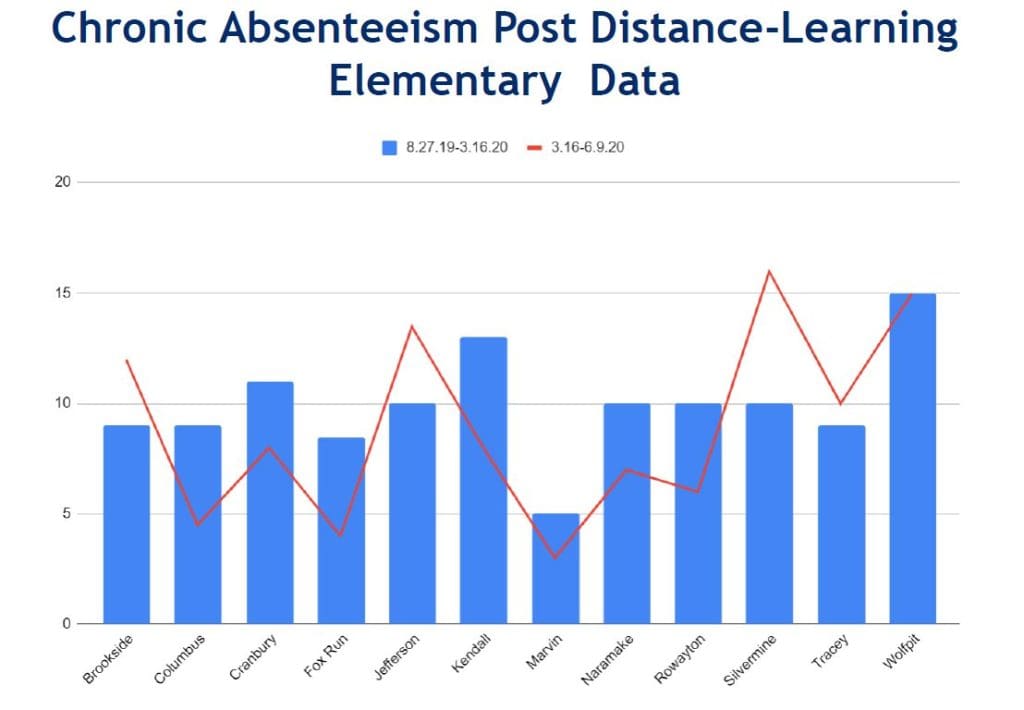 Good report about student absenteeism but it’s also important to discuss teacher absenteeism. Teacher absenteeism in Norwalk PS has been above the State of CT average for all but 1 of the last 6 years. Board of Ed members and administrators should be asking why.

Teacher absenteeism also has a deleterious effect on student achievement and contributes to learning loss, increases the chances of a child not reaching grade level benchmarks by grade 3, and is distributive to the learning process in general.

With NPS now being a district of predominantly high needs students, it’s incumbent on NPS leadership to make teacher absenteeism part of the dialog,

Interesting….Someone mentioned sending a van around town to pick up kids who missed the bus? I think we should take it a step further : Let’s hire people to actually go into students homes and get these kids out of bed. Let’s get creative. There was a quote about some who “typically suffer from Greater Absenteeism” You make it sound like a disease. Maybe the answer is more basic. How about holding the high school kids acountable and challenging them? They will feel better and so will the teachers AND their parents..Holy cow, this is not rocket science. Lastly, I want to commend Harry RIlling and his staff. Calf Pasture Beach was terrific this weekend. Kudos on the Calf Pasture turnaround over the past 10 years…A truly great spot..

Even more reason why schools need to be open on July 6 this summer.
There needs to be “real” summer school, so we can fill in the gap.