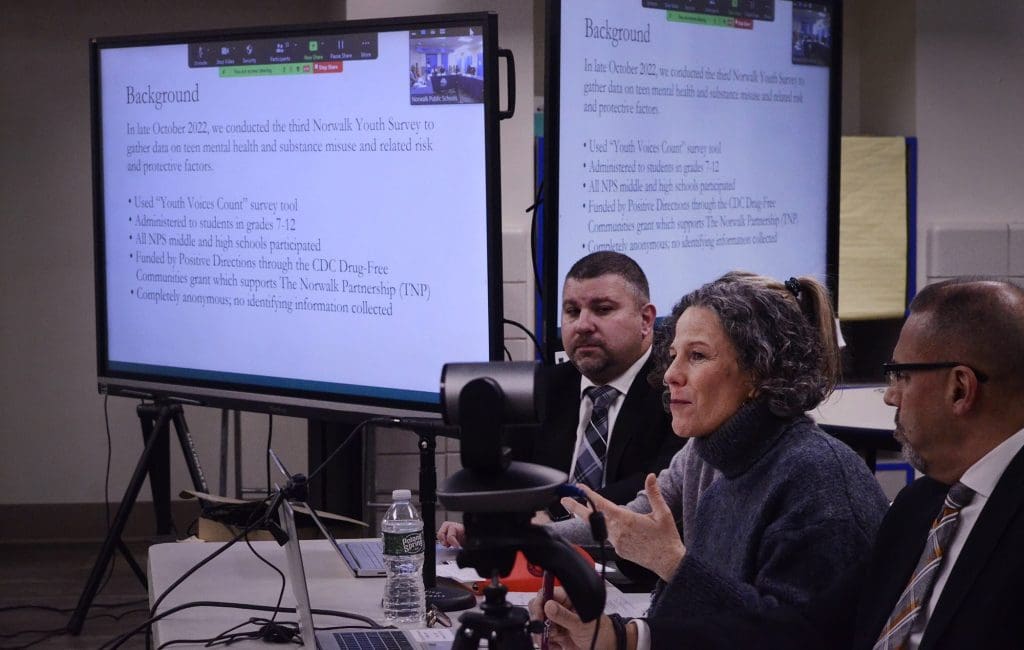 Margaret Watt, Prevention Director at Positive Directions – The Center for Prevention and Counseling, center, speaks to the Norwalk Board of Education, Tuesday in Tracey Magnet School.

Watt, Prevention Director at Positive Directions – The Center for Prevention and Counseling, compared results from a survey done around Halloween to a survey done during COVID-19 isolation measures in 2020.

“The good news is depression and suicidal ideation decreased significantly. And that is not an accident. I don’t think you can just bring kids back from the pandemic and throw them in a classroom and things get better. I think all of us as parents and people in the community know things are not back to normal, our kids are not OK, but they are getting better,” Watt said.

The discussion, coming two days before a joint meeting of the Board of Education and the Common Council Finance Committee focused on the BoE budget request, highlighted the services provided by mid-Fairfield Community Care Center as contributing to improvements.

Those services aren’t included in the budget request approved by the BoE, though it’s 12.7% higher than this year’s budget.

Norwalk Superintendent of Schools Alexandra Estrella said it was important for people to understand the impact of not having the services.

“Sometimes people get so caught up in the numbers, that they fail to think about the importance of the work that we’re doing and how elimination of any of these essential programs and services would set our students back significantly,” she said.

MFCC, formerly mid-Fairfield Child Guidance Center, had 20 referrals from one Norwalk middle school and reportedly many of those students are going to school more regularly and the suspension rate has decreased, said Marissa Mangone, a senior officer for the nonprofit.

“The reality is that we, as a Board, have to really think about this budget season, and what is important and what shouldn’t be cut, or is cut. These are very detailed conversations,” said Board of Education Chairwoman Diana Carpio. 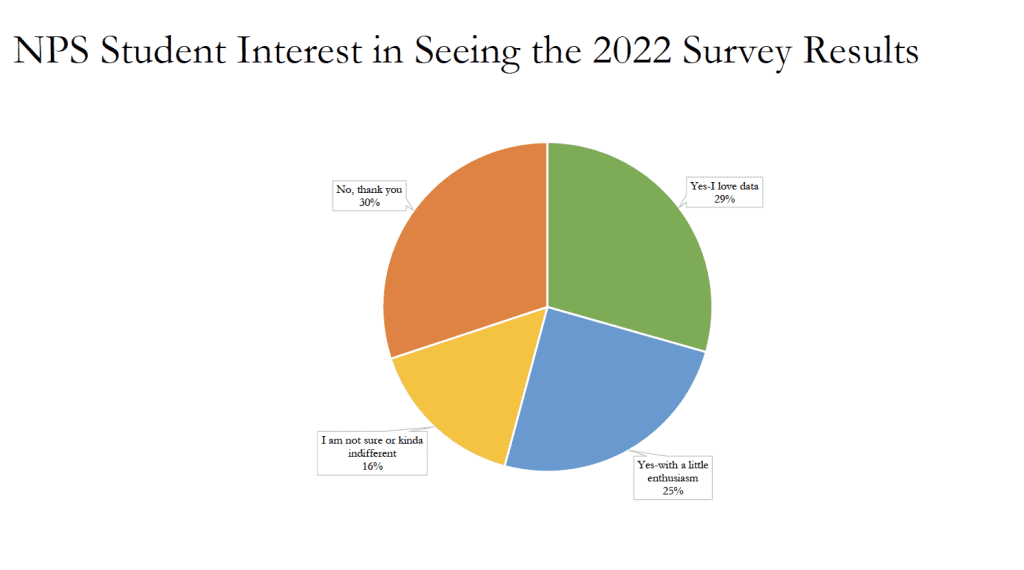 “If you sweep it under the rug, it’s still there,” Watt said. “…If you don’t have good mental health, you’re not available to learn. The school’s job is learning, but you you have to take care of the emotional needs first, right?”

James Martinez, NPS Education Administrator, said he gets daily phone calls about students in crisis. “It’s happening too frequently. … This is K-12. We’re not just talking about secondary, we’re talking about our little people, you know, they they’re struggling with trying to make sense out of life.”

Estrella’s approach has created system-wide support, he said. “I get to talk to a network with a lot of administrators and educators across the country. And when I share what we do here, and the resources that we have, they you know, they they’re beyond impressed because they don’t have these opportunities.”

“Right now, we have a provider in every single elementary school in the district, which is critical, because a lot of what we were hearing was that the behaviors and areas of concern started early in elementary school, and then became more amplified at the middle school level,” Estrella said.

Watt said 3,696 middle and high school students answered the survey, about 69% of those eligible. Sixth graders were not included for a variety of reasons; Watt explained that they’re not typically included in this type of survey and including them would make it difficult to  compare the results with other school districts.

“Throughout the system, we’re constantly collecting data, K to 12, to assess how our students are doing,” Estrella said. 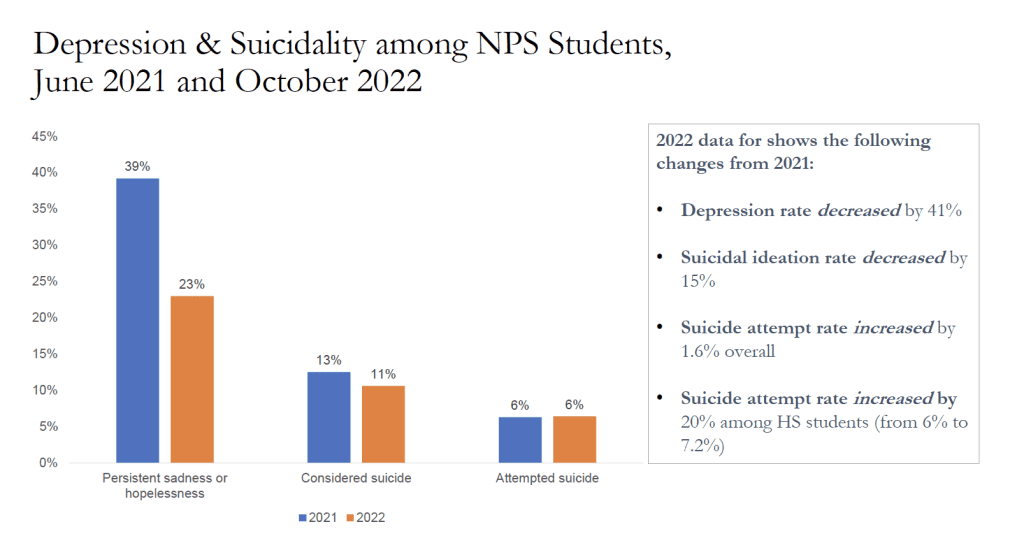 “Statistically, 23% of our kids now are experiencing reporting depression, but that’s a decrease of 41% of the previous rate,” Watt said. “The suicidal ideation rate decreased by 15%.”

While the suicide attempt rate showed as nearly identical bars on her chart, there’s a decimal factor difference, “it rounds to six,” she said.

“One place we saw an increase is… the suicide attempt rate in high school students went from 6% of kids to 7.2, which is actually 20% jump. So we’re not out of the woods there,” Watt said.

Mental health professionals know ideation is down but acuity is higher, so “those who remain have very severe needs,” she said.

As before, LGBTQ, female and various nonwhite students are at higher risk, she said.

“Some other health and emotional health indicators that we gathered this time that were new, because clinicians have been talking about seeing an increase in eating disorders in not just girls, but boys, we measured that,” Watt said. “And as you can see, a quarter of our middle schoolers and a more than a third of our high schoolers are reporting disordered eating patterns.”

That wasn’t on the radar screen but as health educators rewrite the curriculum this year they can attempt aligning with the State’s approach, Assistant Superintendent of Schools Rob Pennington said. 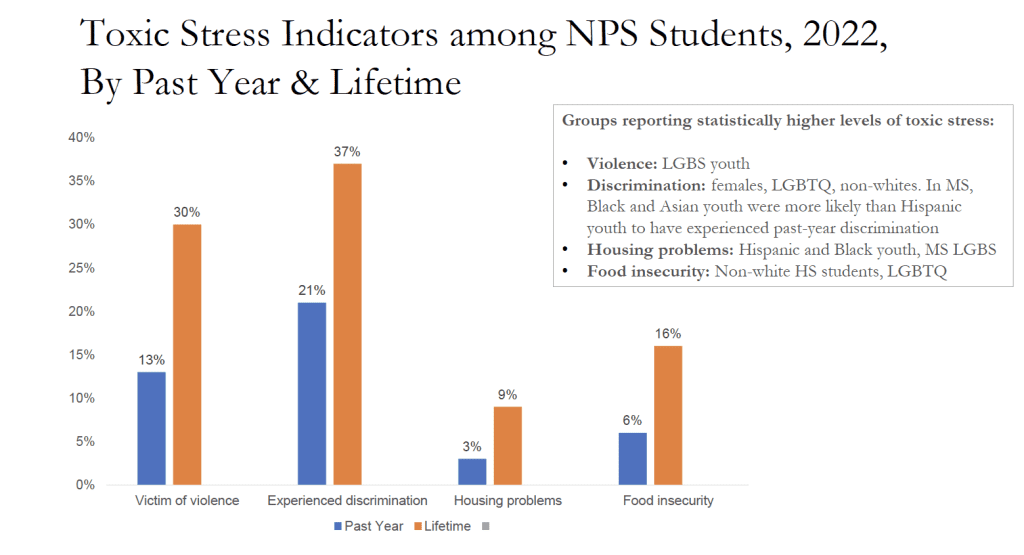 But 488 students said they have no adults they can trust.

“The good news is kids are really not using substances,” Watt said. “This mimics national and state data where during the pandemic, youth substance use rates plummeted for the most part, and they have not been coming back… Norwalk rates honestly were lower than a lot of the surrounding towns in the first place. So good for us.”

Still, Watt said mental health professionals are overwhelmed. Every single one of the providers is needed and “you can’t take any of them away,” she said. 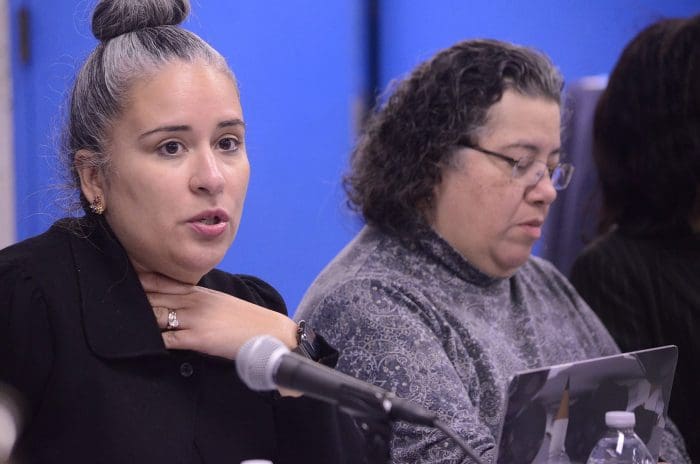 From left, Norwalk Superintendent of Schools Alexandra Estrella and Board of Education Chairwoman Diana Carpio, Tuesday in Tracey Magnet School.

Mid-Fairfield served 1,300 children last year, 80-85% of them Norwalk youth, Mangone said. Two clinicians are in Norwalk’s high schools and last summer, in response to a plea from Estrella, five were embedded in the middle schools.

MFCC has received 28 referrals from West Rocks and the clinician has a caseload of 18, she said. The average course of treatment is usually around nine months.

The nonprofit also has an “extended day treatment program is for kiddos ages five through 12” who have suicidal ideation, Mangone said. There are three-hour-a-day programs for the 12–16-year-old set. Five children were recently discharged; none needed hospitalization and four were able to transition back to a lower level of care.

“There was a 14% decrease in problem severity, which is statistically significant, and also a 16% increase in functioning when comparing data,” she continued. “So what you’re seeing is stabilization of these students. You know, again, reducing those out of district placements, those intensive hospitalizations.”

“We also have partnerships with Norwalk Community Health Center, where they provide all tele visits for families and providing therapeutic services for the families at large,” Estrella said. “So all of these components have yielded really positive outcomes for our students and families. And we need to make sure as we continue to think forward about the work that these services don’t become obsolete, particularly as we continue to talk about the budget process.”

Nancy, thanks for such good (and late night!) reporting. Just want to clarify that when you quoted me as saying that “5 years ago we didn’t have kids in crisis,” I was referring to Kids in Crisis, the organization that provides TeenTalk counselors in the school. They were added as a contracted community partner and others have been added since, and yet still everyone’s caseload is full. There’s so much need!

Thank you Diana for not letting NPS bury the survey results under the table like they wanted to. Every parent appreciates the transparency that you are bringing to the table.

This is funny. Surveying teenagers? You could get a swing this big from morning to afternoon. Suicide etc is horrible, but schools have about 1% impact. Social Media is about 90% of the issue.

Wish the BOE reviewed concussion data along with all the ofher data points.

David McCarthy, where is the data to support your claim about schools having 1% impact and social media 90%? As for surveying teenagers, people with your attitude only help them to feel more alienated and alone. And there is data to back that up, including from Kids In Crisis, Norwalk Youth Crisis and many other reliable organizations. It’s irresponsible to make such false claims as fact.

I can tell you from my experience in Darien where we had 3 deaths at our HS- 2 of which were suicides (there was also at least one parent suicide) last Spring, no one can establish the precise % causal factors of suicide. I can also tell you that it roiled our community and regardless of whether the school can or can’t make an impact the school system the community expects the school system to react and try to implement policies and programs that support young people and reduce extreme emotional distress. One can debate the effectiveness of the programs but there’s no way in the world that Darien could simply step away and throw their hands up because in one person’s opinion they only matter 1%.
We have a nation with a severe adolescent mental health crisis. More affluent districts seem to be suffering from it at a higher rate than less wealthy areas. It’s healthy for the community to know how kids feel and what they’re engaged in. Parents should also know both what’s on the survey and what the results are. No man is an island unto himself