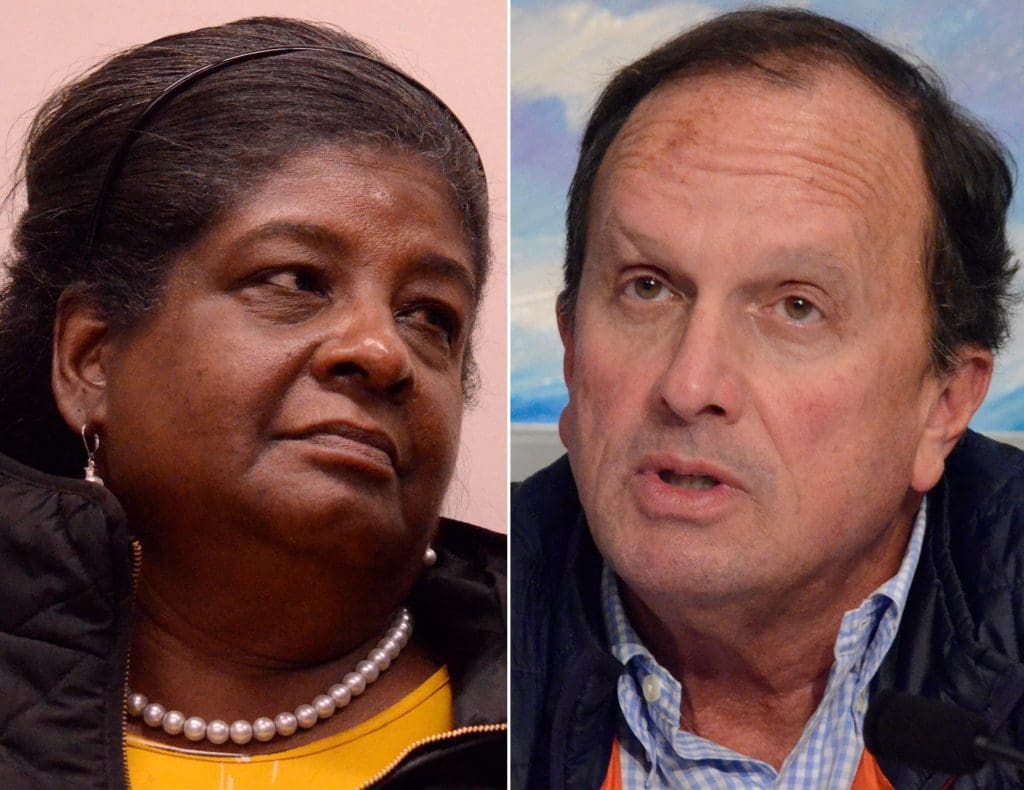 NORWALK, Conn. – Two months after NAACP members packed a Norwalk Board of Education meeting demanding Mike Barbis’s resignation to no avail, the president of its Norwalk chapter is poised to try again.

But BoE Chairwoman Sarah LeMieux says public perception that the board is doing nothing to address Barbis’s behavior is false. Barbis has gotten an earful internally and the Board is looking to change its policies in the future, she said. Barbis is under fire for a series of emails that have become public. Penn-Williams first called for his resignation a year ago, after NancyOnNorwalk uncovered an email by then-BOE Chairman Barbis urging Board members not to attend an NAACP fundraising dinner. Then, three days before last fall’s election, an even more offensive email mysteriously surfaced, ending with Barbis saying “Blacks f— Latinos.”

Running unopposed, Barbis was re-elected to another four-year term. But he is no longer a Board officer, and he’s been given no Committee assignment.

On Saturday, LeMieux addressed “a public perception that the Board hasn’t addressed Mike’s behavior and the way he chooses to express himself. That’s not the case.”

“The Board’s Policy Committee is researching bylaws from other Boards of Education to see if it can develop tools to deal with a Board member who has, for instance, violated the civility code,” she said.

“He’s been on there for so long,” Penn-Williams said. “They still respect him (or are) afraid of him and they do what he tells them to do.”

Asked for examples, she said Barbis “brings money back to his district disproportionately, and Rowayton is the only school in Norwalk with a state-of-the-art cafeteria.”

LeMieux said Rowayton parents organized to improve the cafeteria using mostly money raised by the PTA. “It was a great example for the districts because then the district renovated the cafeteria at Tracey and I think at Kendall.”

West Rocks Middle School’s cafeteria has also been renovated, with other schools on the list, Board member Barbara Meyer-Mitchell said.

In an email to NoN, Barbis wrote that Rowayton parents “got architectural plans done pro bono … and raised 50% of the cost to pay for the entire project. The other school cafeteria projects were 100% paid for by the city. There was no parental funding and no pro bono work by any supplier. So Rowayton got no special treatment. In fact, they got less than the others.”

“FACT: Norwalk can thank the PTA at Rowayton School and, in particular, 2 parents, Heather Schneider and Aimee Ableman, for championing this project and laying the ground work for these improvements to happen all over the district.”

“FACT: I spent all of my time, effort and leverage trying to build two schools in South Norwalk and we know the result there.

“FACT: In South Norwalk, there are 1,369 kids in Pre-K through 8th grade with no neighborhood school. 84% of them are Free and Reduced Lunch (a Federal measure of poverty) and 94% are non-white.

“FACT: I spent my time, effort and leverage in South Norwalk, not on Rowayton School (which had gotten an addition that was initiated long before I got on the Board).”

LeMieux: We’ve all talked to Mike

LeMieux said she spoke to Penn-Williams on Friday.

“I think Mike has been on the Board for a long time and he has managed to build relationships with everyone in the way that he has, and I think the public perception is that the board hasn’t addressed his behavior or his words,” LeMieux said.

“And you know, it’s difficult because we are operating in a public arena and not everyone can see the behind-the-scenes conversations that people have. But I know I have had a number of conversations with him about the way that he has spoken to people and the words that he chose to use.”

All of the Board members have gotten the chance to say similar things to Barbis, according to LeMieux.

“I made sure that those conversations were able to happen, and moving forward, so that future Boards don’t get into this sort of circumstance. The Policy Committee is researching what other districts have in place to address any future events or incidences,” she said.

There is no legal mechanism to force Barbis to resign.

“I think a lot of the public frustration is that it doesn’t seem like the Board is able to manage itself when things go wrong. And so we want to make sure that the board moving forward has the tools to do that,” LeMieux said.

In addition to these conversations, the Board has “created a subcommittee around inclusion, anti-bias training and diversity awareness,” according to LeMieux. “And Godfrey (Azima) is in the process of putting together anti-bias training for the board, which we’re all going to take part of.”

Meyer-Mitchell said that she and Board member Diana Carpio are on the subcommittee, making it racially diverse.

“You know, we have five new members on the Board,” LeMieux said. “I’m really excited that we have so many people come on who have a lot of energy and who are really excited and committed to doing work to help all the kids in Norwalk Public schools have you know, the most wonderful learning experience that they can have.”

LeMieux is temporary chairwoman; there will be another officer election in March.

“And so you know, I’m doing my best to, to work with everybody to come up with ways that we will be able to more effectively do that moving forward.”

Many who attended the unruly Nov. 19 Board of Education meeting, armed with signs and speeches, were out-of-towners. Penn-Williams’ call for protestors at other meetings drew only a handful, but on Monday the topic was prominent during the annual breakfast honoring the late Rev. Martin Luther King Dr.

“Many of us in the minority community need to have these issues addressed head-on, and they need to be dealt with in a sincere, serious, truthful, honest and respectful manner,” Mark McElwen said, in a speech provided to NancyOnNorwalk by Penn-Williams.

McElween took Democratic leaders, including Mayor Harry Rilling, to task for not revealing Barbis’ email to the public when it was sent. This left a “distrusting feeling and many unanswered questions to many in the minority community,” he said.

“Mr. Barbis, I’m sure you’ve accomplished many good things during your time served on the Board of Ed and no one can take that away, but you must realize that now because of the email you have become a distraction for the Board and the community,” McElween’s speech said. “Many of us have forgiven you for the emails that were sent, but you need to understand that although you have been forgiving, they are still consequences. If you care about the well-being of your City, you would do the right thing and resign from all City positions, so that the healing process can begin.”

Stay strong Mike Barbis, you are needed on the Norwalk BOE. You have done good work for all students.

To begin,…….while I do not condone the bad behavior of Barbis, he was elected to his position on the BOE by the people in his district. Therefore, unless he offers his resignation it would appear that the only other alternative for his removal as a member (at this time) would be by the people in his district, at the end of his term, if he chooses to seek re-election. But from what I have been able to see (from watching events & reports from the sidelines) little pressure from his district has been imposed on Barbis, since the election encouraging him to resign. Should this change, who knows how Barbis would react. Just my opinion.

IF for some reason Mike Barbis leaves the board, I hope the Dems come up with a Fresh Face — It’s time to look forward, not backwards.

There is great support for Mr. Barbis and I hope he will stay strong fighting for children of Norwalk, against special interests and political establishment.

Anyone ever check out OIB (only in Bridgeport)? It’s bizarro world! They have a Bob Walsh, a couple of serial commentors, a HUGE BOE scandal rife with intrigue and corruption -it might be better than ours!, a Democratic led Gov’t to boot with fun infighting. Hand picked cronies and mayor who’s got some baggage. I guess we all more alike than different.