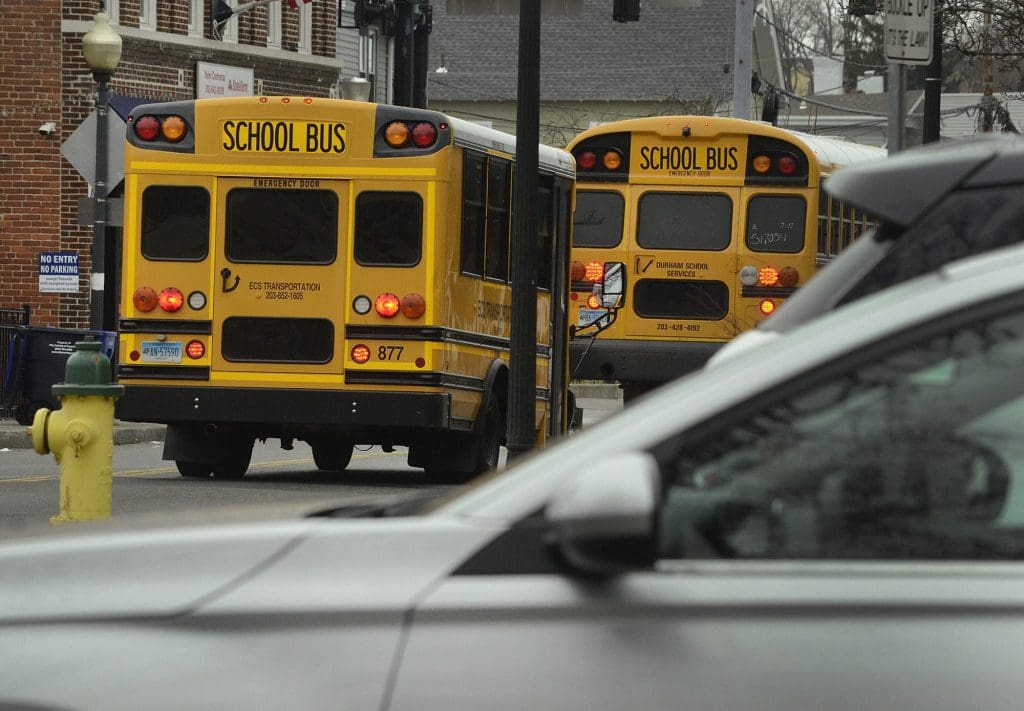 In 2020, the Board of Education went ahead with its plan to give teenagers an extra hour of shut eye even if COVID-19 had prevented Norwalk Public Schools from doing a traffic study to research what impact the bus schedule changes might have. The buses weren’t full due to the pandemic and all seemed well, but last year, when more students went to school, many of them were late due to gridlock.

“It would probably be year or so away” if the Board of Education decides to resume the changes to high school start times, he said. “They would just like to have to study and say whether or not they should continue to even look at changing bell times.”

FHI Studio, a Fitzgerald & Halliday, Inc. company, will do the study in the spring and fall if the Common Council approves its proposed $31,375 contract Tuesday. It’s an addition to FHI’s contract for a city-wide traffic master plan, so although the Board of Education is paying the expense with money budgeted in 2019, it needs Council approval.

It will be wasted money, according to Bryan Meek, a District D Republican who is likely to replace Tom Keegan on the Council, should Keegan go through with his plan to resign on July 1.

“Stop that traffic study. There’s no reason to do it right now,” Meek said Thursday to the Council Economic & Community Development Committee. “We don’t have a good viewpoint of what Strawberry Hill traffic really looks like until that bridge is completed.”

The Connecticut Department of Transportation is raising the Strawberry Hill Avenue bridge over Interstate 95 because it was hit multiple times by truck traffic. The work is expected to be complete in November 2023, Principal Engineer Vanessa Valadares said recently.

Meek also cited the U.S. Senate’s approval of the Sunshine Protection Act, which would make daylight savings time permanent in November 2023 if approved by the House and signed by President Biden.

“That right there should change that whole study and analysis,” Meek said. “Doing a hand count while Strawberry Hills under construction. … Just scrap it, table it, save the money, do it later.”

“I wouldn’t count on that going through,” said Council President Tom Livingston (D-District E), noting news reports that “nobody knew about” the vote.

“Any single senator could have blocked the daylight saving bill from passing but many didn’t know it was even happening,” BuzzFeed News reported.

Congress tried to change daylight savings in the 1970s but it was “reversed within months because it was such a disaster,” Smyth said. “But, it’s a good question.”

Bolella said he’d see if the consultants could address that in the study.

“I’ve heard the rumors and the talk of traffic and, and drop offs and just, you know,  I guess the chaos of it all. I just wonder what spending $32,000 will solve,” said Economic & Community Development Committee Chairman John Kydes (D-District C).

“I imagine that part of the reason it was such a disaster is because they didn’t do the traffic study in advance,” Smyth said. “I think it needs to be done if this is something that they want to move forward with the school start time change.”

The Committee approved moving the contract to the full Council for a vote, with Keegan casting the only vote against the study.

As usual our BOE and Supt focused on the “bid issues” confronting Norwalk’s public schools. Best leave the “minor issues” such as our students inability to meet CT Edu Dept standards for graduation to a later time. After all some, but not most, of our students make it to college.

I know many people have fiercely held, opposing opinions about this issue. Lots of folks who don’t want changed start times mention future employment prospects, and that jobs won’t let them come late. To that, I think it’s actually ok to try to change the world to make it better for people rather than forcing people to adapt to an unhealthy world. That said, I think splitting the difference timewise might be the most practical way of addressing the problem. I also think there are other possible creative solutions out there – it might make sense to study the financial/staffing impact of having HS students have staggered start times, with an earlier and a later shift.

The city already wasted $90,000 non a previous study led by Mr Kimmell. Whats wrong with these people. Use the money for the kids. Such a waste of time and money. Our board of education is an absolute joke of an organization. Everyone gets rich but the kids!

No one wants to change the times as was obvious as the outcry and failure of the last experiment. We have so many other issue to be concerned with and we need every dollar and not waste it which this is. Leave the times alone and let’s move on!

Tyson Canevari, the BoE is a volunteer elected position. No pay involved and a significant expenditure of time. Just fyi.

Cmon Sarah. Next you will want to walk you kid to his 9th grade home room. Let them have some responsibility. My kid is at school in Stamford from Norwalk for a 7:20 start every day. Doesnt seem to be a problem. Ever see the kids from St Joes in Norwalk catch the bus at 6:45 to get to Trumbull for 7:30am. Seems to work ok for them. Traffic study, meetings, etc???? Stop wasting our tax money. Spend it on the kids. And yes, employers dont change their start times cause you are a lazy ass; they just fire you!

@Sarah. Just because they are volunteering doesn’t give them an excuse to do a poor job. Stop wasting money on studies if you aren’t going to listen to the recommendations.

Tysen: You’re right on many levels this week. Show me a young adult who was over-parented as a youngster and I’ll show you an unhappy directionless person.

Sarah – Without putting words into Tysen’s mouth, I believe he was referring to all the adults- consultants, contractors and other third parties making more and more money off the kids. American public education continues to move away from academics and preparing kids for higher education and a globalized economy by well intentioned, but misguided BOEs setting policies that benefit the grown-ups.

Sarah. I am never one to knock a volunteer. In fact, I admire anyone that does. I would like to see the money spent on the kids just like others in this chat. The dollars spent on all this nonsense could do wonders in the classroom. Maybe hire another reading specialist or some after school tutors for kids. Now thats a study no one can deny!

There is absolutely NO need to have such an early start time – Not healthy for high schoolers. parents of a FEW are putting their convenience before others. Just because those parents were the loudest doesn’t mean they are correct. There can be a median time gap – START SCHOOL at 8:00 INSTEAD of 7:30 .. Why is there NO compromise or any logic applied by the dissenting parents? Why don’t they care about other opinions and instead put so much effort in putting down those who disagree??

You’re not the only people going to office/ work!