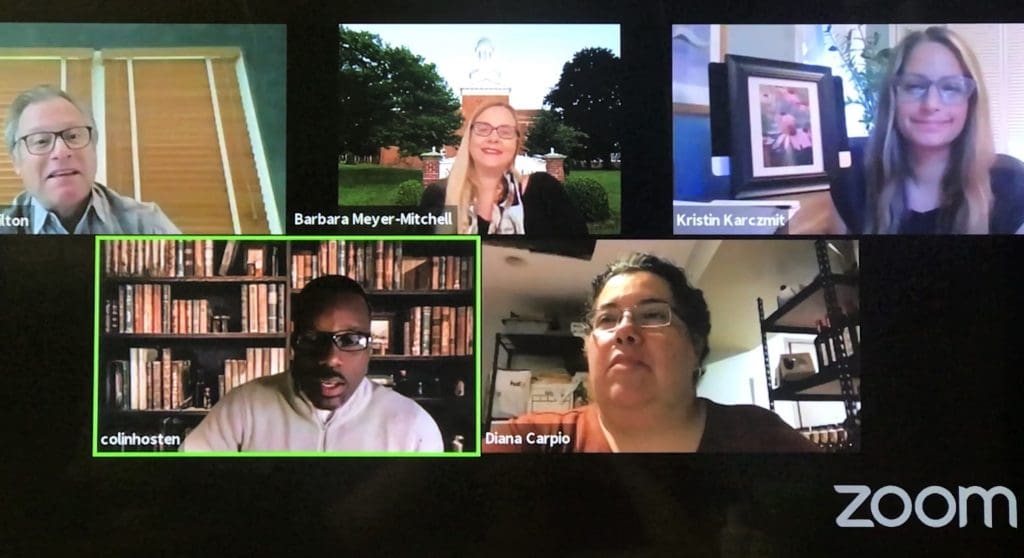 NORWALK, Conn. — Norwalk Board of Education members moved ahead their reconciled budget Thursday, while praising the detail they were presented by staff members.

“I think what could have been a really, really contentious and unproductive process was the exact opposite,” Colin Hosten said.

The budget factors in a tentatively projected $2.47 million surplus, much of that attributed to COVID-19. Board members plan to ask the City for a $1.5 million carryover; Finance Committee Chairwoman Barbara Meyer-Mitchell suggested adding another $45,000 to that request to fund a full-time English Language Learner (ELL) teacher at Fox Run Elementary School.

She also suggested using some of the projected surplus to fund full stipends for athletic coaches for the aborted spring sports season. Norwalk Public Schools Chief Financial Officer Thomas Hamilton cautioned that the projection is tentative, that it’s just his “best estimate of where I think we’re going to land.”

“We don’t routinely put out public projections of where we think we’re going to end the year, and the reason for that is because there is considerable uncertainty whenever you do any forward looking projection,” Hamilton said.

Also, the coaches would have to be paid by the end of the fiscal year on June 30 but the certainty about the accounting won’t happen until sometime in July, he said. He promised to look into it further.

NPS has a $875,306 shortfall in its food services account, Hamilton said. That compares to a $481,000 shortfall last year, and the problem is pension benefits.

NPS needs to plan for shortfalls every year because “it’s very hard to see how to make this operation actually breakeven because of those pension benefits,” he said. The trick is to reduce the deficit “down to a number that that that is, is as low as $250,000.”

COVID-19 added $442,000 to this year’s expected food services shortfall, he said. That starts with reduced revenues; then there are increased operating expenses due to the need for social distancing. But there’s a “glimmer of hope” given an estimated $475,000 in revenue this month for the summer feeding program. “If that holds true… that would certainly be … a very welcome development.”

The projected $2.47 million surplus factors in the food services deficit and $801,605 in COVID-19 expenses and $283,469 in lost revenue due to COVID-19. NPS has saved money because it hasn’t needed to hire substitutes, Hamilton said. There are savings in extracurricular stipends and teacher salaries, all of it adding up to a $4,431,306 “turnback.”

Subtract the total $1.9 million in expenses from the $4.4 million turnback, and you get the projected $2.47 million surplus.

Under state law, the Board can retain a portion of a budget surplus equal to 1 percent of its budget. That’s the “carryover” that is often a part of the budget cycle this time of year. The $1.5 million NPS expects to request is .75 percent of the 2019-20 budget.

The Finance Committee went over its budget in great detail Wednesday, getting an overview of the student-based budgets (SBB) in every school, in a four-hour long meeting.

The school needs are so different, Board member Sherelle Harris said Thursday. “It was just really impressive to see all of this demonstrated through the budget. It was very detailed, I was able to see the budget as a whole. And I don’t think that I saw that the last time I was on the board. Barbara, you know, I know you asked a lot of questions, but it’s worth it for us to be able to see things as a whole.”

Meyer-Mitchell had scheduled Thursday’s meeting for the actual vote on the budget, as the Committee members didn’t have all of the information ahead of their Wednesday meeting. The Committee voted unanimously to send the budget to the full Board, in a meeting that lasted eight minutes.

“I’m sorry to call the extra meeting and taking time away from people’s families, but it was really necessary for us to have the time with the materials,” Meyer-Mitchell said.

“I think you did exactly what should have been done. You know … you don’t want to vote blindly. So I personally have appreciate this extra step,” Harris said.

“I was definitely very impressed with all the information in the detail and the line items last night. I actually felt better making this decision and voting, and also knowing now that for future reference that … definitely, every school has its own independent needs,” Diana Carpio said.

“This is my best (budget) experience even though it was under the worst circumstances possible, in terms of the pandemic and the shutdown,” Meyer-Mitchell said. “But the level of communication between Central Office and the buildings and the Board has made me sleep better at night, and feel that we are serving the community in the way that they would like to be served.”

Wait one minute…Let’s see if I have this straight. Our taxes are going up 4-5% mostly due to Increased funding for board of ed. Many in our community have lost their jobs and will have difficulty paying for food. And the board recommends we pay coaches for spring sports that weren’t played? Am I only the person on the planet that thinks this is ludicrous? Regarding the surplus carryover: God forbid the city reduces planned increase by $1.5 million and uses that money to reduce taxes. I believe this is a shell game being orchestrated by some who think they’re smarter than everyone else. I find this disingenuous at the very least.As I write this I’m reminded of NON policies and have edited this post 3 times before sending. This funding scheme should not be tolerated.

No meaningful cost reductions, no alignment with sticking it to taxpayers amidst a severe recession . . . like a walk in the park and just so easy spending money that you have not earned.

The only two sectors that haven’t been touched by the past few months are The Government and financial services.

Lot’s of people are out of work or, are taking pay cuts yet, we have this budget “blessed”. I’m glad our Board of Education are being “spiritual”. Please pray for me and my family that my new job takes me away from Connecticut (please don’t pray for a job in New York either)

Thank you Rich Bonnefant for lifting up the hood and shining a flashlight on what should have been obvious to all of us. Especially The Board of Ed.

“The committee voted unanismously( mispelled but quoting Barabara) to send the budget to the full board in a meeting that lasted eight minutes.”.

Hey The Board of Ed has passed the budget. They have patted each other on the back. now who will pay for this.

Don’t count on passing this on as just another small tax increase and hope people will only be angry for a day or so and accept this. Have you spoken to your neighbors? Many people outside of Government employment have been forloughed. I don’t know any one who has not suffered a reduction in income. The thought of raising taxes now? Tax Payers Matter.