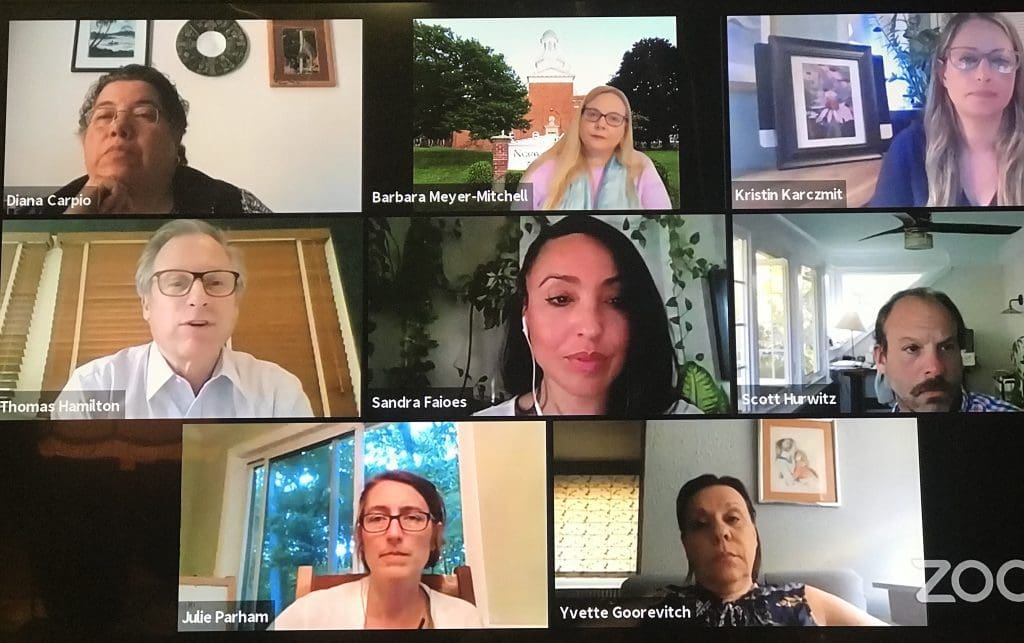 NORWALK, Conn. — Months after fears of painful cuts in light of a $8.1 million discrepancy between plans and funding, the Norwalk Public Schools budgeting season is ending on a high note.

“It really is a remarkable budget that I think we are, you know, coming to a conclusion on this year,” Norwalk Public Schools Chief Financial Officer Thomas Hamilton said to the Board of Education Finance Committee on Wednesday.

“Norwalk Public Schools are in a very fortunate place,” thanks to decisions made by Mayor Harry Rilling, the Board of Estimate and Taxation and the Common Council, Hamilton said. “You know, the pandemic has really, you know, wreaked havoc on this economy and a number of school districts and a number of cities and towns, including nearby cities and towns, are making decisions about budget cuts and budget reductions that are fortunately not the position that we are in, in Norwalk.”

Stamford is working on a no increases budget, and if Norwalk were doing that, NPS would be making $10 million in reductions to its education budget, he continued.

This comes after the Board of Education approved a $216.5 million budget ask in January, although Rilling had cautioned that the Board needed to do some soul searching before requesting what was being characterized as a 7 percent budget hike after years of funding increases.

In March, Norwalk Superintendent of Schools Steven Adamowski laid out $6.6 million in cuts, although the Council had authorized what it said was the biggest increase in school funding ever, $9.9 million more than what NPS started the current fiscal year with. Adamowski told the Board to request an additional $1.5 million to avoid cuts that would directly impact students, money he said was equal to the cost of educating the English Language Learners (ELL) students who unexpectedly arrived this year.

Wednesday’s budget magic referred to $1.5 million, but this was NPS Budget Coordinator Kristen Karzcmit informing the Board that they’d need to request that amount as a carryover from this year’s budget, something Rilling has indicated the City is willing to do.

“I think we need to sort of keep this all in perspective,” Hamilton said. “We have really a, I think, a tremendous story to tell here. We have a budget that is allowing us to add additional teachers, regular teachers, add additional Special Education teachers, add new programs, the ASL (American Sign Language) program,” and keep middle school counselors, as the Finance Committee had requested.

It also keeps high school department heads, another priority for the Board.

The Committee then spent just under three hours delving into the details of the budget, developed through intensive work with individual School Governance Councils, according to Karzcmit. “Just so you’re aware, every detail in the total budget does reconcile now,” she said.

Hamilton stressed the importance of Student-Based Budgeting. “It’s imperative that as the district’s highest governing body you, the Board of Education, avoids sort of second-guessing individual funding allocation decisions that are really best made at the school level,” he said.

The three middle schools that have a dean of students are keeping the position, Karzcmit said. Hamilton explained that the director of counseling position had been removed from the budget, but was instead going to be funded through grants.

“I know that the thinking is that now more than ever, that that position is really critical from the standpoint of providing clinical supervision,” Hamilton said.

The position is split-funded by the Priority School District grant and Individuals with Disabilities Education Act (IDEA) money, Chief of Specialized Learning and Student Services Yvette Goorevitch said. “Funding it that way allowed us to preserve the position and to support the implementation of the counseling redesign that we worked on last year, this past year.”

Karzcmit’s PowerPoint detailed which budget goals were funded by moving their funding to grants, and highlighted the $1.3 million realized through revised health insurance assumptions. Cuts to Central Office totaled $578,782, but these were balanced by an equal amount of “restorations,” cancelling cuts that had been proposed. Adamowski had spoken of cutting an unspecified “chief” position; that isn’t planned now.

The most significant cut was to summer school, a $445,000 savings obtained by not providing the academy to rising 7th and 8th graders.

Goorevitch said improvements to Special Education, which were funded by a $3.6 million special appropriation over three years, helped.

“We have been working really diligently to stabilize this special education budget over the past three years. We finally got to the point where we can forecast and budget appropriately without anticipating these wide variances from year to year,” Goorevich said.

Karczmit again emphasized the SBB process, where teams scrutinized “the core structure” and looked at their staff rosters, helping to make cuts and “really come out in a better place for most of the schools.”

“We’ve vetted out everything, there’s, you know, no stone unturned,” she said. “We utilized grants wherever possible. We talked to Curriculum and got Curriculum and Talent guidance, we looked at all the HR issues. We made sure everything was tied up.”

High school principals attended the meeting, going over the details of their budgets with BoE members, hashing out issues while indicating assent to the plans. Hamilton reviewed the Brien McMahon High School figures and said, “We’re not going to put ourselves in a position where all of a sudden we’ve got, you know, an extraordinary number of students in study halls who don’t want to be there because we cut teachers to retain department heads.”

Not every high school student will take the maximum eight credits for a school year, and savings are built into the budget because of that, Hamilton said. Eight credits might be too much for most ninth and tenth graders.

The Committee plans a second meeting Thursday, where they expect to vote to move the proposed final budget for a vote by the full Board on Tuesday, although the Board could wait under Gov. Ned Lamont’s executive order.

“I think there’s a lot to celebrate here as, as Tom pointed out, and I definitely want to thank all of the various political bodies, the Mayor and the Council and the BET, who have vetted our budget,” Finance Committee Chairwoman Barbara Meyer-Mitchell said. “And in a time when many municipalities are being cut, we are able to continue to strengthen our system and keep improving, which is a true blessing.”

She respects the theory behind SBB and is “thrilled to have this kind of collaboration with the SGCs this year,” she said. “This is the most transparent this process has been in the three years that I’ve been serving, and certainly even when I was a parent advocate prior to that, so I’m very grateful to the staff who put in the time to make that transparent.”

Committee member Diana Carpio said she was “loving all the detail.”

“One of the hardest things as a Board member is when someone comes to you angry about something that’s changed, and you weren’t even aware that it happened,” Meyer-Mitchell said. “So with this level of detail, we can own what has changed and be responsible for it. And we feel much more comfortable that way.”

Excellent example of group-think caused by one-party rule in the echo chambers of City Hall.

Only in Norwalk do we “celebrate” year over year over year massive increases to the Education budget in the middle of a pandemic and recession. I guess we can all rest assured while Teachers get to keep their jobs and get raises so that the ELL student can learn English.

I find the talk of transparency amusing. This seems to be as clear as mud. If I understand whathat I’m reading the mayor is supplementing the budget voted on by Common council with $1.5 Million dollars? Is this 3card monte? Transparency by definition would not include side deals to fill requested budget gap!! I find this disingenuous and a travesty of protocol. With respect to comparisonsee with other towns? Many towns have gotten the message that CT unemployment rate is 20%, so they thought it best not to burden their taxpayers further with property tax increases. Obviously, our team thought it was better to tax us further so they could implement much needed sign language curriculum and other basics to survive. Will we never get back to basics?

“We had a number of ELL students who showed up unexpectedly” Welcome to Norwalk, “the Dish Network City”

It seems we do a major disservice to black children when we have to push budget to ELL and no doubt, slow down the learning for kids in other classrooms. I’ve yet to hear anyone explain how this helps black kids.

In the real business world most of the people involved with budgets like this would be fired!?
Reality never sets in.

There should be no tax increase this July here in Norwalk, primarily because of the Board of Education’s carry over savings, budgeted funds that were never spent in the current academic and fiscal year which can be used next year and ought to be factored into lowering our tax levy.

Since March when the schools were shut down, here’s a few examples of funded items that the Board of Education as well as the Board of Estimate and Taxation should have figured into their year-end reconciliation because they weren’t needed or used.

Busses and other transportation cost savings.

Waste Management Services because there was no garbage.

And let’s not forget all the Spring Athletics in several sports where there was no money spent:

Transportation to away games.

Saved a year on uniform wear.

So will these savings be passed down to the taxpayer, or used to start up new perpetual programs because there’s found money to be spent? This was unclear from the article.

The schools really need to reopen this summer for real summer school. The achievement gap is only going to widen if not.