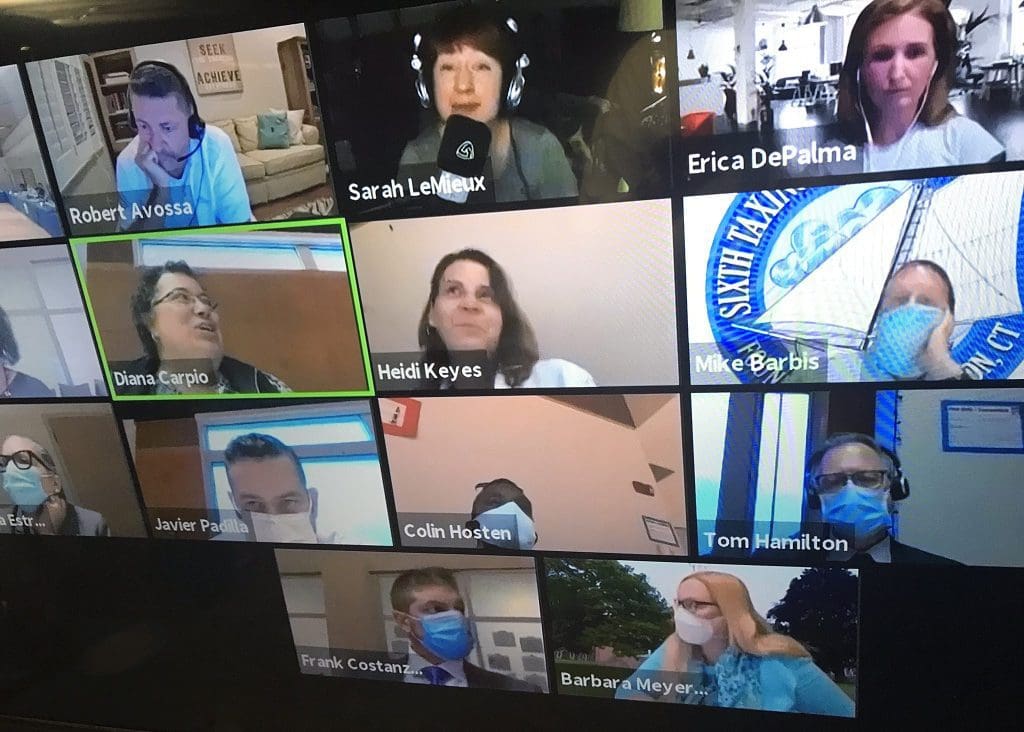 Struggling to hear each other in a Board retreat held partially online and partially in person, they worked to evaluate themselves and their performance, looking with the help of a facilitator for weaknesses that might be standing in the way of efforts to help children.

Late into the evening, a fault line appeared: four female members gave the Board a bad grade on confidentiality issues. Privileged information is leaking out from executive sessions, they said.

They also talked about the struggle to keep politics out of their work. Concerns were expressed about the “chain of command” when attempting to respond to constituent complaints. Budgetary exhaustion also made an appearance into the conversation.

It’s the seventh year the Board has held a retreat in July. The practice began as an attempt to work out animosity between Board members, airing out differences in private, and developed into a public deep dive into information, charting the course for the school year.

COVID-19 has made that process problematic. The retreat is being held in the Center for Global Studies, but only open to participants. Thursday’s session was livestreamed onto YouTube but the video began late and the audio was often indecipherable. Even facilitator Peter Gorman complained, suggesting early on that he might not be able to perform his role because he couldn’t hear.

Gorman and co-consultant Robert Avossa were attending by Zoom, as was Board Chairwoman Sarah LeMieux. Other Board members and some administrators sat around a big table at CGS, wearing masks, socially distanced from one another; after about 40 minutes that tactic was dropped and everyone was on Zoom, even if there were sitting in CGS.

“You have a policy of encouraging unitary reporting structure, but yet, Alex reports to nine individuals,” he said. “So Alex has to build a relationship of trust, loyalty and respect nine times over. And that brings some challenges sometimes for Alex, when you might come with different priorities.”

“If things aren’t flowing in the Board room, it ends up impacting the classroom directly,” he said later. “…Superintendents are sometimes only as effective as their Boards will allow them to be. But when you are an interdependent Board working together, it is remarkable what you can do for children.”

Children as the priority?

Thoughtful discussions about ways a good Board can work together led to Gorman guiding them through a self-assessment worksheet. 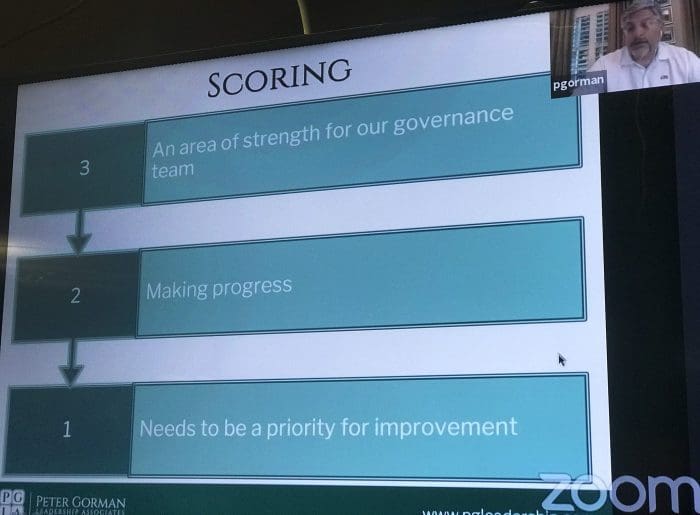 Godfrey Azima gave the Board a two out of three when it comes to putting children first. Lemieux agreed.

“It’s very clear to me that as a board, and as a district, we’re trying to be a three,” she said. “… I don’t know that our data says that we have succeeded as the three in there. And I should say, by data, I don’t mean testing assessments, I mean, the experiential data of the kids that we’re serving.”

“We definitely strive to be a three but when we don’t make that work, it’s when we allow interpersonal issues within our community to infringe upon our decision making for children,” Barbara Meyer-Mitchell said. “And that takes on multiple forms that I think the community is aware of.”

Board members repeatedly mentioned a perception that they are a rubber stamp for the superintendent. Gorman repeatedly reviewed the role of Board members, setting a direction for educational staff but allowing them to do the work. 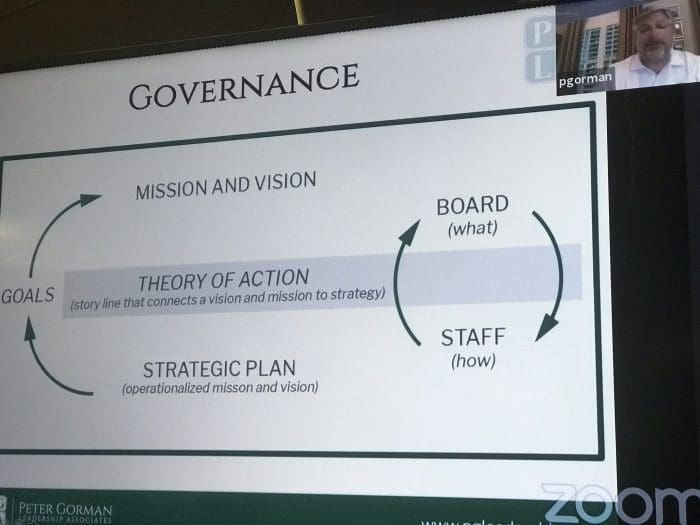 “The structural construction of a Board of Education is a little strange, relative to what it’s intended to accomplish,” LeMieux said. “…It’s a little bit of a weird civic structure, that nine people without any necessary experience in education can be elected and impose their opinions in the form of direction and goal setting on people whose expertise is in the field of the job that they’re doing.”

DePalma said she struggles with the idea that elected citizens set the “what” for a panel of people who highly trained educators. “There’s a balance between asking to be educated on a topic and making sure that the due diligence was done, versus interfering in the day-to-day.”

“It’s really difficult, from our point of view to know what that balance is,” Meyer-Mitchell said. “And for us, I think it was very important that whatever was done, we could own with integrity and there was nothing done that we didn’t know about. So that if the community was angry with us, they had good reason to be: we made a choice that they didn’t like. But what’s very difficult as a Board member is when a choice is made, we’re not informed and then we are required to own it to the public. And that’s the difficult tension.”

‘It’s harmful for our community’

Gorman asked for a one-to-three rating on the Board’s success in maintaining the confidentiality of privileged information, including what’s shared in executive sessions.

“No,” LeMiuex said, then explaining, “No, not a three. It’s an area about which I have concerns.”

Diana Carpio, Meyer-Mitchell and DePalma agreed, with DePalma giving it a “one.”

“We’ve had real difficulty maintaining confidentiality of information that we’ve shared just among ourselves in executive sessions or in caucus,” LeMieux said.

“I think this ties into that piece about partisanship or political. When information from executive session is used for political purposes, it’s really harmful for the community,” Meyer-Mitchell said.

“It’s come up, unfortunately, on social media and other platforms,” DePalma said. “There’s this expectation by the community that what we do has to happen in public and I think that there’s a difference between what happens in public and public decision.”

The Board needs to come together as a team and brainstorm in a realm where “no question answered is dumb and no suggestion presented is a bad suggestion,” she said. “There has to be that flow of information, if we’re going to make any real impact and we can’t have this fear that it’s going to leak out to the community before it’s ripe to do so.”

“I agree with Erica that it does come out into the community at times sooner than we had expected or voted on,” Carpio said. The new Board members went through training and the “whole Board, even the veterans, sorry, Heidi, should all have sat through that.”

Heidi Keyes, a veteran Board member, agreed that “confidentiality is so crucial and critical for our work, so especially an exec session,” and that perhaps there should be some training to reinforce that lesson.

“Power is information and access,” Gorman said. “And sometimes people choose to share the information they have access to, in the position of power. I’m not saying that’s what happens here, but we don’t have trade secrets you can cash in on or things like that. It’s other reasons.”

Next came the issue of referring constituent complaints to the appropriate person in the chain of command.

LeMieux gave that a 2.5. “I think this board tries very hard to do that and is not 100 percent successful,” she said.

“Dr. (Steven) Adamowski had us send everything to him and just copy who we thought was the appropriate chief,” DePalma said. “So with Dr. Estrella, I think we probably just need some guidelines of how she would like that to work.”

“When you’re an elected official, people expect you to respond and expect some sort of reply back saying that the issues either been closed or it’s a continuing ongoing investigation, etc.,” Avossa said. “We’ll get to that tomorrow.”

Gorman asked about having an adopted budget aligned with resources and with district indicators of success.

“We really, really tried. And now it could all disappear if we don’t have funding for reopening,” Meyer-Mitchell said.

Avossa ended the evening on an optimistic note, describing success he had as a superintendent in the Atlanta area, helping a contentious Board of Education transform and be recognized as a national School Board of the Year.

“When you put systems and processes in place, we can get to a good place where everybody feels like they’re part of the system, and their voices are being heard,” Avossa said. “So tomorrow, we’re going to go through communication protocols. We’re going to talk about Board priorities. And we’re also going to talk about … the alignment that exists between priorities, goals, the way we spend our time people and money and the superintendent’s evaluation.”

I’m just curious if Mike Barbis was at this retreat and has been finally placed on a committee?! He is a duly elected member.

Having mentors in my life from the corporate board circle was invaluable experience, but more than any other piece of advice I ever received was that an effective board member understands and practices the concept of “Nose In, Fingers Out”. What this means is that it is not the board members duty to micromanage affairs. Doing such erodes the trust of talent and makes them look elsewhere and worse sets up the situation where important decisions are made outside the board members knowledge because staff can’t stand their interference in minutiae. Glad to see this board continuing the tradition of self examination.

Thanks BOE members! It’s a lot of work and responsibility for an unpaid job. Everyone in a community is affected by what you do and there is no way in this world you can satisfy everyone. Thanks for the hard work, the perseverance, and the ability to fend off criticism and act in good faith to improve the lives of all the children in our community (and parents too)!

I also wonder about Mike Barbis he stated what we all knew and was vilified for it. The schools can’t do it all the parents have to be involved in their children’s education Everyday