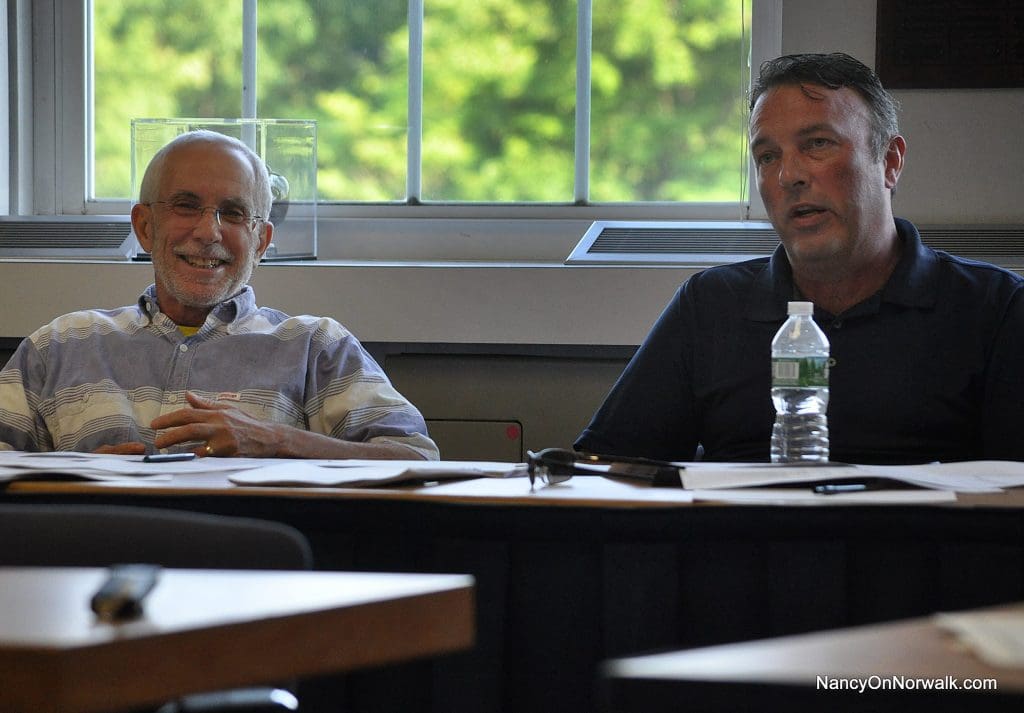 NORWALK, Conn. — The results of months-long budget drama are much less painful than they might have been, Norwalk Board of Education members said Thursday.

The full Board will vote on these recommendations next week.

“From where we started, from the Finance Director’s recommendation of 0 percent, which would have resulting in letting go of 100 people, to get down to 22 (positions cut) at the end of it is an accomplishment,” Board of Education Finance Committee Chairman Bryan Meek said at the Finance Committee discussion on the 2018-19 budget. “I have no pleasure or pride in letting these 22 individuals go but, as Bruce (Kimmel) said, this was not done haphazardly, it was done within the framework of the strategic operating plan and with these budgetary pressures that the city is putting on the school system, we have no other choice than to operate more efficiently, wherever and whatever we can.”

Early this year, the Board of Education requested a $9.9 million increase for its 2018-19 operating budget; the Common Council eventually authorizing a $6.4 million increase, a 3.5 percent increase over 2017-18, in a budget which included a nearly $3 million drawdown from the general fund balance, or Rainy Day Fund.

In the course of this, Norwalk Finance Director Bob Barron presented the Common Council with a recommendation for “0” increase for the BoE, saying he was leaving the school district budget entirely up to the Common Council.

“My recommendation is that you give them as much over the base as possible,” Barron said in February. “… I decided to turn it a little bit this year and not make a recommendation (of how much over the base you can go) … I wanted to impress upon you that that base is rock solid in that you should fund as much of the ‘Board of Ed’s’ budget as you think you can afford.”

Hamilton, in explaining the “reductions” Thursday, repeated much of what was said by Norwalk Superintendent of Schools Steven Adamowski in March – secretaries aren’t needed so much in 2018, and Briggs will be replaced by two blended learning classrooms at each high school. The Central Office cuts are not yet specified.

The plan to cut kindergarten aides and guidance counselors drew protests in March.

The Board approved a retirement incentive, Hamilton explained to NoN after the meeting, in regard to the 12 paras at the elementary schools.

“That is in lieu of what had been the elimination of all the kindergarten aids,” Hamilton said. “It’s a much smaller cut, number one, and number two, because of the retirement incentive there’s more vacancies built up, which will help reduce unemployment expenses and potential impact of layoffs. We don’t know whether there’s going to be any layoffs at this point but certainly because of the retirement incentives, any layoffs will be significantly reduced.”

Hamilton during the meeting reviewed the strategic operating plan goals that are being accomplished, spending $2.1 million to eliminate high school study halls; more than $1 million to lengthen the school day at six of Norwalk’s elementary schools – Kendall, Jefferson, Marvin, Brookside, Fox Run and Tracy – which includes adding a fourth specials teacher at each school; $635,816 to pay K-3 classroom teachers from the local budget instead of inappropriately using a state grant; $700,000 for English Language Learners (ELL) and $400,000 for a pilot of music lessons for fourth and fifth graders. Also boosting the budget is $225,000 for an unfunded state mandate, a full day program for expelled students.

Meek predicted a challenging budget season next year, as he’s been saying, and quoted consultants Milone and McBroom as forecasting about 11,300 students in NPS for 2016-17, and, “we have 11,700.”

“We have 300 more students inside of a year and a half that we did not anticipate,” Meek said, likening that to Wolfpit Elementary School doubling, “like a whole school appeared out of thin air in a year and a half.”

The head count at Norwalk Public Schools has gone down by 60 positions in the last five years, while the city is “up six positions,” and “the whole thing is not sustainable,” he said.

Meek made this claim in the NoN comments section May 22, writing:

“Norwalk Public Schools have 65 fewer employees since the Mayor took office and more reductions are coming very shortly due to the budget reductions forced on the schools. The Mayor has added 8 positions and counting to city government. His last campaign was on the success of the school system and his support for it, not growing city government.”

Rilling on May 23 said that the city has not added eight positions. He added Assistant to the Mayor Laoise King to the staff but Communications Manager Joshua Morgan filled a position created by modifying an existing position, he said, also explaining that he hired Liz Stocker to replace Tad Diesel when he began as Mayor, filling the business development position.

“I think Bryan Meek has trouble with numbers,” Rilling said. “While the city budget has increased, the Board of Education budget has increased millions of dollars. So, reducing 65 people but still increasing millions of dollars. I am not saying I disagree with the increase, because we want to help the Board of Education implement their strategic plan but to ask for an increase, and be granted an increase, and then turn it around on the city by saying they have reduced 65 positions, I think that’s just political grandstanding.”

Asked in May to name the eight positions, Meek directed NancyOnNorwalk to a city document. In an email Meek said this to explain the resultant chart (shown below):

“City government has grown by 3.  Finance by 1.   DPW by 1.  He’s hired several since these 6/30/17 by {NoN’s} reporting and is adding more.  My count is 8 now.  Maybe it’s more, but hardly shrinking like education, the function the mayor supported the most with lip service in his campaign.

“Education has gone from 1259 to 1166.  To be fair you need to add 32 outsourced custodians to the NPS number.  Anyway you slice it, the city is growing…..will grow some more……the school systems population is growing, positions are shrinking and the council is forcing us to shrink them more.”

There were many positive comments made at Thursday’s meeting.

Kimmel thanked the staff and said BoE member Julie Corbett had been a “big plus” with her many suggestions.

“There’s always going to be winners and losers,” Kimmel said. “… We are a department and we don’t get what we want every year. I think we have done a pretty good job of minimizing the anxiety and acrimony.”

“We just didn’t pick and choose from a whole menu of stuff, we have some goals and we want to preserve those goals. I think we did a good job of doing that,” Kimmel said.

While the middle school sports funding is being halved, “we’re really looking at it as a one year moratorium,” Kimmel said. “…We think we can create a more efficient, much better system for the kids.”

This will involve working with Recreation and Parks, and, “there are leagues all over the city, we just have to get a handle on what’s going on, what’s possible,” he said.

Corbett, who is not on the Finance Committee, thanked the staff and said, “I do think from where we started, we have come to as good as a place as we can get with the circumstances that we are currently all trying to negotiate through.”

Norwalk Federation of Teachers President Mary Yordon also thanked everyone, “especially” the volunteers serving on the Board of Education.

“It’s a complex and huge undertaking,” she said, remarking that she appreciated comments about the budget being “overwhelming” and “unsustainable.”

“This is hard,” she said. “It’s hard to be on our side of it watching it because these are our colleagues. This is the work we do. These are our careers and what we have committed out lives to. I really appreciate the human face that you put on these numbers, these are real people. These are 600 extra students over the five years you mentioned, and having reduced staff to deal with these kids is very difficult. So I really do appreciate your understanding the scale and the human face. This looks like a pretty good outcome, compared to what was discussed earlier on, and that was only due to your efforts and scraping every little dime. We really, really do appreciate that.”

A chart shown on page 128 of the audit linked to above, showing Norwalk’s full-time employees over the last 10 years.

It is astonishing that with all the new city development, the grand list can not absorb the growth at NPS. Just imagine when all the new apartments get occupied what further challenges the school system will encounter. Add the detrimental impacts on residential real estate values due to poor regulation of land use zoning (i.e. half way homes and institutional elder care charging $5,000 – $6,000 / room being granted applications on residential streets) and today’s challenges will look like child’s play vs. what’s to come. Bridgeport anyone?

All in all in a City with a decades long stagnant Grand List, declining property values and Exodus of long time homeowners fearing further falls in property values and ever more punitive property taxes a modest reduction in the School budget increase is not a bad thing .

Of course BOE members and parents will claim that the demands of public schooling far overshadow nthe demands of homeowners for an affordable City. Especially when the City’s public Unions mostly live outside the City claiming high taxes.

Developers get the tax breaks, residents get screwed over once again.

Educators are worth more to the public good than the police force. More and better education = less need for police. But in Norwalk, the BOE is squeezed for every penny, while many police officers routinely earn more than $100,000 annually, mostly for directing traffic at taxpayer-funded (albeit privately-operated) construction sites.

With the student count (residents) growing in Norwalk how can BOE cut positions? it simply makes no sense. there needs to be more schools and staff, and as for para professionals, they are very important and needed for educational and safety reasons! look what has been happening at Marvin elementary school this last quarter (Q4 2017-2018)… or is our BOE and parent community ignoring that? sure wish the principal & SPED teachers as well as the security guard tell the truth about that, kids just running out of class… off school grounds. I wonder if the parents of those kids know or even understand they need to unite and speak up about it, and ensure their kids safety.