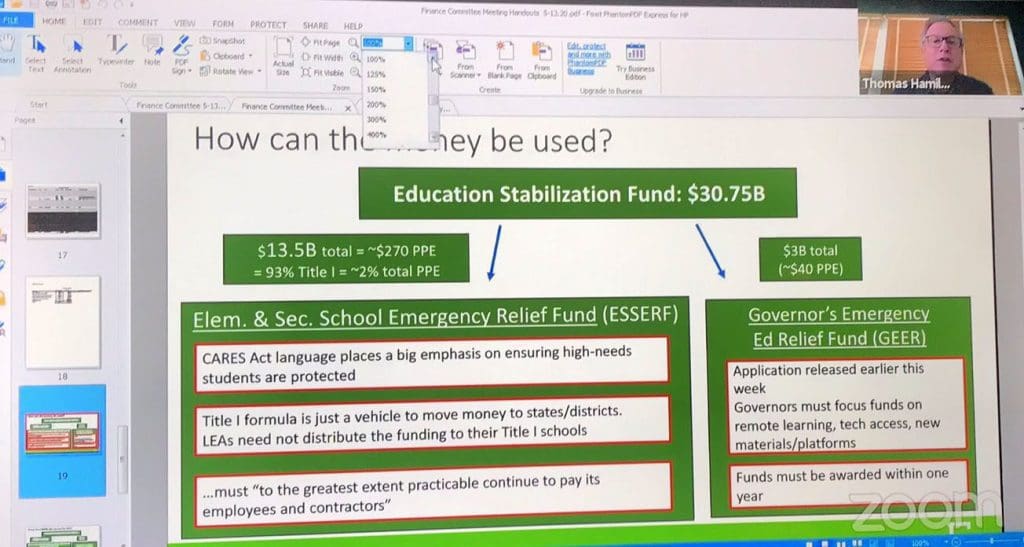 NORWALK, Conn. — The financial news brightened for the Norwalk Board of Education with the news Wednesday that the expected $1.5 million cost of educating English Language Learners next year has been covered.

The Committee has been tasked with cutting $6.6 million from the Board’s proposed budget, although the shortfall was $8.1 million. Norwalk Superintendent of Schools Steven Adamowski had urged Board members to press the City for the $1.5 million, before COVID-19 struck, although Council members said the $9.9 million increase in funding to NPS is the largest increase ever. The City said no.

On Wednesday, Hamilton detailed $3.7 million in unexpected expenses due to COVID-19, including $626,173 to sanitize the schools and $1.5 million in Chromebooks. But the City has covered those particular expenses, and the Board’s cost is $937,675.

Hamilton listed revenues that NPS expected, that aren’t materializing due to the pandemic. These include facility rentals and $500,000 that was expected in food sales. A total $800,000.

But there are also savings. Hamilton declined to detail those so as not to be held to the list, as if it had been a promise.

“Honestly, it’s a moving target until we close the books and in August, because things, you know, crop up, that we weren’t aware of,” Hamilton said.

“We’ve gone through and looked at where we have savings, and have concluded that we have sufficient savings to cover the $937,000 of extra COVID expenses that were not anticipated, plus the $800,000 of revenue loss,” Hamilton said. “And then on top of that… we feel comfortable and confident that we have $1.5 million of savings that we would be able to request the city to carry forward to ELL.”

In addition, NPS has learned that it will receive $2,084,380 from the federal government through the CARES Act, slightly more than was expected, Hamilton said.

“We’re soliciting ideas from schools” about how the money would best be spent, within the parameters set by the CARES Act, Adamowski said. There’s a tremendous demand for summer school and NPS will be able to provide it.

The money can also be used to buy masks and other personal protection equipment (PPE), and to fund extra transportation costs brought on by the need for social distancing, Adamowski said.

It can’t be used to fund COVID-19 testing, he said, in response to a question from Finance Committee Chairwoman Barbara Meyer-Mitchell. But it could be used for social and emotional support.

A “more concrete” breakdown of proposed spending will be provided in June, Adamowski said.

Regarding decisions on cuts, Hamilton advised the Committee to wait, given the work being done by School Governance Councils (SGCs) to formulate school-specific budgets in accordance with per-pupil budgeting.

“All of the principals now are really experts, frankly, on their operations and on their budgets. And I’ve been sitting in on these budget meetings and I have to say, I’m really, really impressed with the work,” Hamilton said.

“It’s important to note that while we are sad to make cuts to our planned budget, we are adding 73 new positions with the funding that we are receiving,” Meyer-Mitchell said.

The Committee went on to consider $1.1 million in proposed budget transfers. Members cautioned that things have changed and responding to the pandemic is the priority now.

The SGCs have come in under budget in various areas and have planned what they’d like to do with their surpluses, Hamilton said.

It’s a social contract that the SGCs be rewarded for scrimping and saving but that’s “in the absence of this kind of catastrophic event,” Meyer-Mitchell said, a sentiment echoed by Colin Hosten and others.

“I just want to make sure that we’re not, for lack of a better word, doing frivolous spending, especially in this time,” Sherelle Harris said.

Attracting particular scrutiny were a proposed transfer of $20,000 to convert a Wolfpit Elementary classroom to a dance studio and $24,600 to fund improvements to the West Rocks Middle School learning commons.

“This one’s tricky for me,” Meyer-Mitchell said. “I’m a West Rocks parents and I know that this is a really important and great project but it is also, to some extent, discretionary and not necessarily related to getting through the pandemic.”

“I really appreciate that we’re able to follow through on these some of these plans that have been months and months in the making… but I think one of the questions I have is, how much of that should we think about recalibrating in the light of not knowing how much we will need to recalibrate for the fall,” Hosten said.

“It is hard for us to approve additional expenditures that aren’t crucial, when we don’t yet know whether we’ll be able to protect the positions that we want to protect in June,” Meyer-Mitchell said, referring to the needed $6.6 million in cuts.

The Board is loath to cut counselor “positions in the face of this crisis when our children need those services more than ever,” and is “extremely concerned” about cutting high school department heads, Meyer-Mitchell said.

She asked if the Board could have a detailed presentation in June. Hamilton said the money needs to be committed before the fiscal year ends on June 30, and the SGCs need to vote.

“That may be cutting it a little tight,” he said. “…I understand what you’re trying to do but we are going to run out of time. The problem is that we’re not going to have time to, you know, go through a bid process and get things awarded before June 30.”

The Committee indicated that it would hold a special meeting to consider the transfer requests.

“Hindsight is 20/20,” Meyer-Mitchell said. “So would we have spent 600,000 to clean the buildings, if we had known would be out so long and the germs would have died by the time we wanted to use them again? It’s very hard to look at a crystal ball and know what the right thing to do is here.”