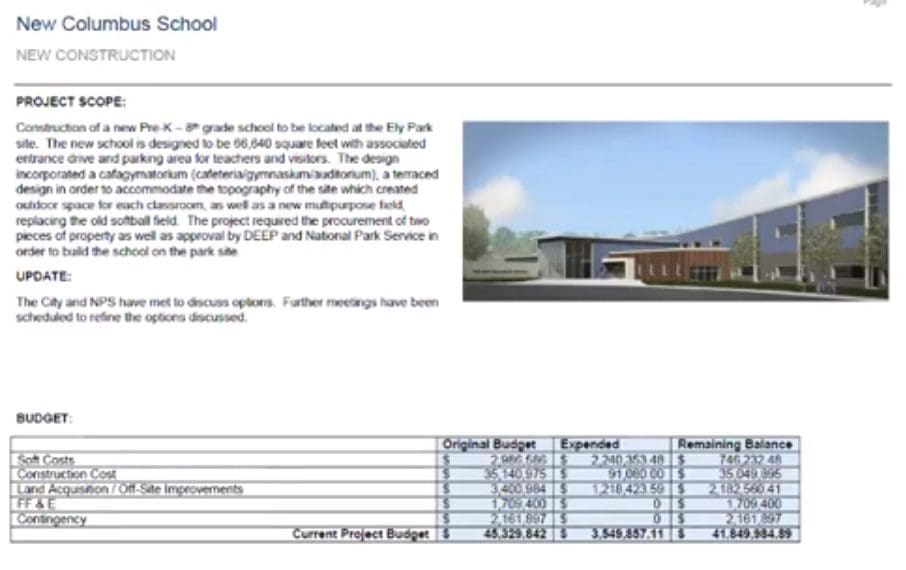 The new Columbus Magnet School was a topic at Wednesday’s Board of Education Facilities Committee meeting. So was COVID-19.

NORWALK, Conn. — The Board of Education Facilities meeting met Wednesday and:

A walkthrough of Norwalk High School and Silvermine Elementary School revealed that some modifications were in order, after three “members” of the Norwalk Public Schools “community” have tested positive for COVID-19, Norwalk Superintendent of Schools Alexandra Estrella said.

NPS Director of Facilities Bill Hodel went on to explain that some HEPA air filters may be too thick for school equipment, and the specific systems are being evaluated. MERV10 filters may be used instead of MERV13 filters in some areas.

“It’s important to know that we need to closely monitor it because we don’t want to get complaints that there’s no air in a certain area of the school,” he said.

He emphasized that a State architect had toured Jefferson Elementary and Brien McMahon High School before the reopening and “gave us good grades.”

While “filters are extremely valuable and are certainly needed in this case, we are really not recirculating indoor air. We’re exhausting indoor air and pulling in outdoor air,” he said. He called it a state requirement, that given COVID-19 the district must bring in 100 percent outside air.

MERV13 will be installed in every building that has the capacity for them, Estrella said.

Marvin Elementary may not be up to MERV13 filters because it’s solely served by rooftop units, Hodel said in response to a question from Board of Education Chairwoman Sarah LeMieux.

“We might have a handful of others such as Kendall, maybe Silvermine, but we got to get a closer look to make the determination,” Hodel said.

Heating systems will likely be turned on sooner than usual, probably on Oct. 1, Hodel said.

Finance Committee Chairwoman Barbara Meyer-Mitchell asked Chief Financial Officer Thomas Hamilton for regular updates on heating costs so that the Board will not be surprised at the end of the year with a big bill.

Jim Giuliano of Construction Solutions Group, the city’s project manager for new school construction, said the Jefferson Elementary School renovation is still on schedule. Even with the school being used as swing space due to social distancing requirements, “destructive investigations” are proceeding, “which is helping us tremendously in our understanding of the existing conditions,” which may save money by avoiding change orders.

The State approved the project to be classified as “renovate as new,” meaning there will be a higher reimbursement rate for the work, Hamilton and Giuliano said.

Construction on a new Cranbury Elementary School is expected to start in April 2022, Giuliano said.

The State may decide today, Thursday Sept. 24, or Monday whether to approve legislation allowing the construction of a new Norwalk High School with an 80 percent reimbursement rate, he said.

“We have been in the process of tying up some loose ends with regard to the grant application. However, we do need to go through some approvals that the city has to has to do. You know, that’s where it’s going to take a little bit of time just based on the process of the rules of the city,” Giuliano said. “But we’re in a good spot that should this pass and be included in the school construction bill, which we heard it was, we’re in a good position to move forward on this very quickly.”

The school may be built where the softball field is now, meaning a prolonged construction period as students are “hopscotched” from one part of the property to another, he said.

Meyer-Mitchell warned that an adjacent neighborhood has had flooding issues and that may need to be taken into consideration.  Giuliano said he hadn’t heard of this issue before and it will be considered when the project moves beyond the conceptual phase.

“Options” are being discussed to move the new Columbus School building forward, he said.

“Nothing has been finalized. But it is in the works. It hasn’t been forgotten and we are moving forward,” Giuliano said.

The project has been held up due to the need for then State to approve a land swap, as a small amount of parkland is slated to be used for the new facility, behind the Nathaniel Ely preschool. Some community members object and the Connecticut Department of Energy and Environmental Protection (DEEP) has not signed off.

Board members agreed that the new, limited in scope, facilities study might help move Columbus forward by looking at enrollment by neighborhood.

This would be an update on the study completed five years ago.

Meyer-Mitchell suggested that the study review “the initiatives that we started in some buildings, but not others,” so that it could “articulate which buildings have been repaired to such state that we are better off keeping them rather than starting from scratch.”

If the new school behind Ely is going to be further delayed, then perhaps issues could be addressed in the existing Columbus, the school on Chestnut Street, she said.

The 5-year-old plan was to build the Ely school and then renovate the Chestnut/Concord Street school after the student body moves to the new building.

“One of the important things to me about this process is transparency to the community, because I think, for whatever reason, and it’s partially just human nature, but each of the different school communities sees themselves as sort of in competition with the other schools for resources,” LeMieux said.

“I think that actually, the approach of not starting from scratch with this study, as opposed to when you’re building on the last one, is actually a great way to do that, and kind of to measure what’s been done and what has not been done,” Colin Hosten said.

“We have to really prioritize what’s absolutely crucial,” Meyer-Mitchell said.

Columbus would get more expensive if bond rates go up, Sherelle Harris said.

“Something has to be done and too much time has taken,” Estrella said, referring to “the importance of community conversations around this and making sure that the potential challenges that happened in the past don’t happen again.”

She said, “I think the way that we can mitigate that is by ensuring that we have an open conversation with the community, about around the aspirations of what this could potentially look like.”

Building the new NHS on the softball field? WHAT? Does no one remember the fits the neighbors had about the electronic sign out there on the corner? You really think they are going to withstand construction of a million square foot building there? Why wasn’t the Norden property looked at?

Re: Bryan Meek – Should’a asked Frank Esposito that question when the property was offered to the City. Defense Contractors were required (but who knows what goes these days) to offer their properties to the local municipalities first. After he turned it down, private sale proceeded to Spinnaker. Would roll my eyes every time John Lombardi would go off at BOE budget meetings about Norwalk’s “declining” school enrollment…..

Esposito hasn’t been mayor for 20 plus years now and the population explosion is thanks to Sanctuary Harry’s policies, packing every last square inch of the city with cheaply built apartments and ignoring the 1000s of illegal apartments destroying the quality of life in the city.

Yes, but the property was offered to Norwalk as “right of first refusal” and Esposito turned it down because “the city didn’t have the money”. He then sent out a property tax refund just before the election. Like that $35.00 was going to go real far. I refused to cash my check out of principal. I dare say that single action of not purchasing the property paved the way for the explosion of housing you feel is happening because it opened up the land behind the Norden complex for private development. Lost was the possibility of constructing a new Norwalk High on a much larger section of land with more field space and plenty of parking. You need to look at the history that was; not how you wish to spin it.