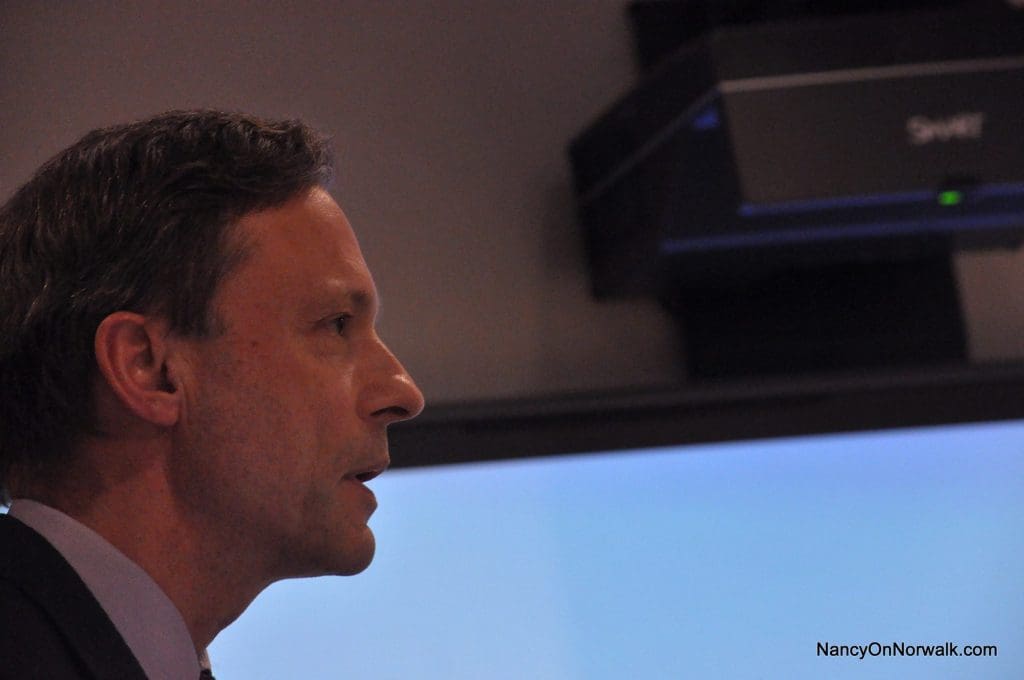 State Rep. Fred Wilms (R-142) speaks to the Norwalk Board of Education on Tuesday in City Hall.

NORWALK, Conn. — An effort made by a Norwalk Republican legislator to keep the pressure on the state for fair school funding while a long-awaited court case is underway to approach the problem from another angle got bipartisan support Tuesday from the Board of Education.

Members also promised to put the heat on Norwalk’s Democratic legislative contingent, who State Rep. Fred Wilms (R-142) said have not responded to his requests for support in his effort to change the state’s Educational Cost Sharing (ECS) formula.

“Whatever we can do here to help move this along, I think we need to do that,” BoE Vice Chairman Heidi Keyes said, agreeing with Erik Anderson that letters need to be written. Both BoE members are Democrats.

A bipartisan effort to get the state to change ECS four years ago failed despite the support of a state legislative task force. In 2014, the freshman Wilms put forward a bill to change the formula to line up with the recommendations made by the task force, and was ignored by leaders of the state Education Committee.

The unanimously approved BoE resolution asks the co-chairmen of the committee to take up the bill. Republican BoE Chairman Mike Lyons said the resolution would also be sent to every member of Norwalk’s state delegation.

Shirley Mosby, a Democrat, asked Wilms if “other legislators” had been part of his ECS effort.

“I am thinking that if it was more of a bipartisan, you know, you know, together, it would pass,” Mosby said. “Because I believe a couple of years ago this was tried and it was not success… I am glad to see you two but I just want to know were there other people from the other side?”

“There may be a response, but I just haven’t heard as of yet,” Wilms said.

“If we have to, maybe we can get more people, the ones you said you reached out to, maybe other people can go there and can tap them on the shoulder… because we keep going down the road to get more money and we are not getting it,” Mosby said.

Wilms had said at the outset that this would be a multi-year journey, and repeated that sentiment.

“All I am asking for from any of my colleagues at this point is even if someone could write a four-sentence letter that just says, ‘Hey, I support your bill,’’ Wilms said. “I understand my colleagues have many other responsibilities. I can appreciate maybe I take the lead on this, maybe they take the lead on other items. So a half-page letter is all we need right now.”

“As far as that tap on the shoulder, that is something we all get to do with our elected representatives,” Anderson said. “I know I get plenty of taps in my short term on the board from certain members of the public. … I do plan on sending a letter, just a short one, as you mentioned.”

“I have no pride of authorship in this whole endeavor,” Wilms said. “So in order to bring other colleagues in, you know they need us taking a more visible role. I am fine with this. I have nothing personally invested in this. I just want to bring the ball forward, so whatever I need to do I am happy to do.”

“We should at least be open and find out why they did not respond. There could be some reasons that we don’t know, so let’s get everything out there on the table,” Mosby said.

Lyons reminded everyone, as had Wilms, that the Connecticut Coalition for Justice in Educational Funding has finally made it to court to challenge the state’s educational funding after a decade’s worth of effort, in CCJEF versus Rell.

“The plaintiffs case will be finished on Friday, then there is a 3-week break,” Knopp said in an email.

The resolution puts Norwalk in a position to benefit should CCJEF prevail, Lyons said. In that case, the court would tell the state to adjust educational funding, with “broad parameters,” he said.

“It’s going to be in people’s heads that if the court comes down on our side, here is a ready-made mechanism to address the problem,” Lyons said. “So I think this is a good step and, you know, if we have to pass this resolution every year we should pass it every year.”

“The one thing we don’t want to do on this is to go quietly into the night, because you can be absolutely rock solid sure that if we stop complaining about this they really won’t do anything,” Lyons said. “We will keep ringing the bell, cross our fingers on the lawsuit and try to get this injustice corrected.”

Rilling was wordless through all this commentary. After the meeting, he said, “I absolutely support (Wilms’ bill) and I certainly intend on writing a letter to that effect.”

Rilling said that Norwalk hadn’t been paying the $15,000 fee to be part of the lawsuit when he came into office and he immediately changed it.

He agreed with Wilms’ assessment: The ECS formula does not take into account Norwalk’s median income nor the number of students getting free and reduced lunch, nor Norwalk’s diversity and struggles, he said.

“I know that the ECS funding is a very big challenge; it has been for many, many years and we have been fighting that fight for a long, long time,” Rilling said. “Unfortunately, some of these smaller communities in different areas of the state seem to have the upper hand and they don’t want to relinquish any of that money to communities like Norwalk, where we are struggling.”

The formula is “inappropriate” and he firmly believes it should be changed, he said.

“I am cautiously optimistic, being on the steering committee for CCJEF … that we are putting on a very good case and hopefully we will prevail,” Rilling said.

“I believe we are going to win,” Wilms said at the outset of the BoE meeting. Getting the bill in front of the committee would mean that state legislators would be aware of what needs to change, he said.

Wilms is not the only person who has reached out to Norwalk Democratic legislators to ask for support for his bill.

“What will you be doing to support Fred Wilms effort at reforming the way Norwalk is treated in funding for schools.

“As a leader in the State Senate and a Representative of Norwalk, whose voters have repeatedly elected, when will you do something for us.

“Forget party Affiliations and do what is right by the people who elected you.

“I do believe we have waited long enough.

“Thank you for your email and for writing. Below is some information I have on state funding for Norwalk’s schools. Please see the chart, which shows an almost 75% increase in funding since I was elected to the Senate. There are other funding sources besides ECS including Priority School District, Alliance District, etc.

“In addition, Norwalk recently received over $3.8M in school construction authorizations for Rowayton and Naramake Schools that’s not included below.

Duff’s chart is pictured below. 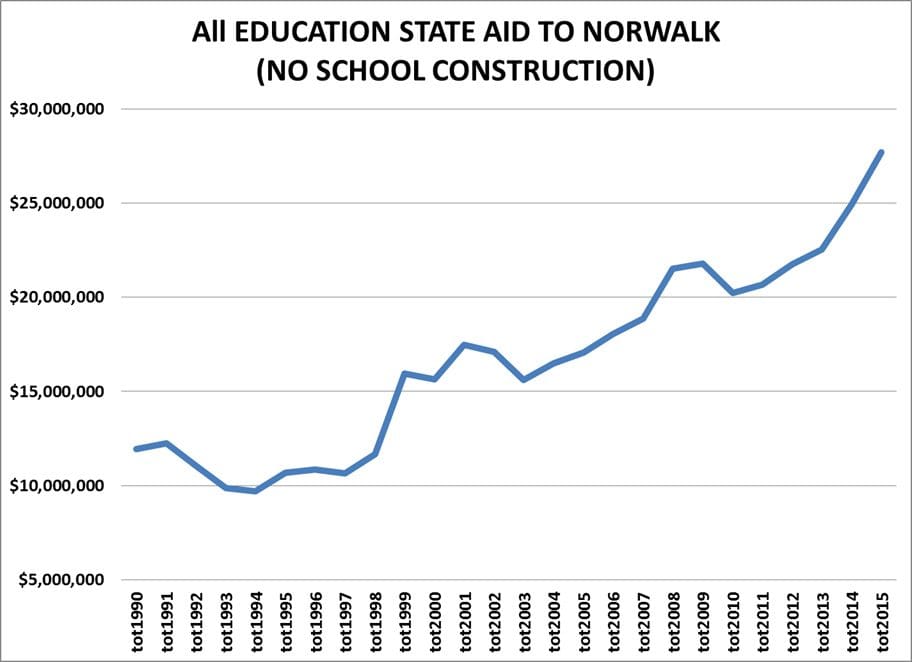 The other side as Mosby is speaking about has KNOWN ABOUT THIS ISSUE FOR YEARS !!! The same people on the other side have been in office awhile!! They were there when both ECS Task Forces were set up by Malloy! I guess we should be beyond thrilled getting all those desperately needed funds for school construction! But let’s not kid ourselves! We are in the process of fighting for $300k!!! If we had been funded properly through ECS in the first place we wouldn’t be having any sort of fight or cuts at all. The state finances are in horrible shape thank to the current administration! But we in Norwlak have a right to what is owed to us! It’s great to see the lawsuit moving FINALLY!! And now we have a bill as well! This time we will not be ignored as we go after ECS from all sides. Let’s just hope Mosby and her friends get a huge tap and join us in this fight once and for all!!! Thank You Fred and Gail for your continued efforts!!! ITS NORWALK’S TURN!

While efforts to rework the ECS funding model through the legislature and the courts are admirable and long overdue, I find it hard to believe legislators who represent wealthier suburbs will ever accept a remedy which does not hold their communities harmless – meaning no reduction in their share of the ECS pot. Without significantly more money, a reworked/fairer formula just won’t pass since it will mean redistribution of existing funds. This is particularly problematic for legislators whose districts include small cities like Norwalk and wealthier neighboring suburbs.

PS. The priority school “work around” and other earmark strategies are great but just that., short term fixes that put off dealing with the real problem – education funding dependent in large measure on local property taxes.

Thank you Mr. Wilms. Keep it up! You’re the man.

BTW, is it true that there is a state law that forbids Norwalk from cutting our school budget by even
one cent even though we’ve increased that budget $3 million per year every year for the last decade?

If that so, that’s tyranny.

Susan, we agree; the upstate legislators will never redress the current ridiculous situation voluntarily. This is why we are supporting the CCJEF lawsuit challenging the constitutionality of the current ECS formula. If that suit is successful, legislation like that proposed by Rep. Wilms will be compelled by the Court. This proposal gets front and center before the legislature what it will have to do. So this is all of a piece — supporting the lawsuit, and having legislation ready to roll if the lawsuit succeeds.

Joe, you are correct (its call the MBR, minimum budget requirement). It is one of innumerable unfunded mandates imposed on us by the state and federal governments.

Fred Wilms – keep up the good work! I applaud your “taking off the gloves” and really dealing with this challenging issue in a way that gets results.

This is the type of leadership we need in CT – practical, thoughtful, fiscally aware and for the people.

Bob Duff’s chart is a bit misleading. When you account for inflation the true “gain” since 1994 through to 2014 is only an added $6.0 million approximately. Not the $15+ million suggested. On average Norwalk has received an added $300,000 per year based on “All Education State Aid”.