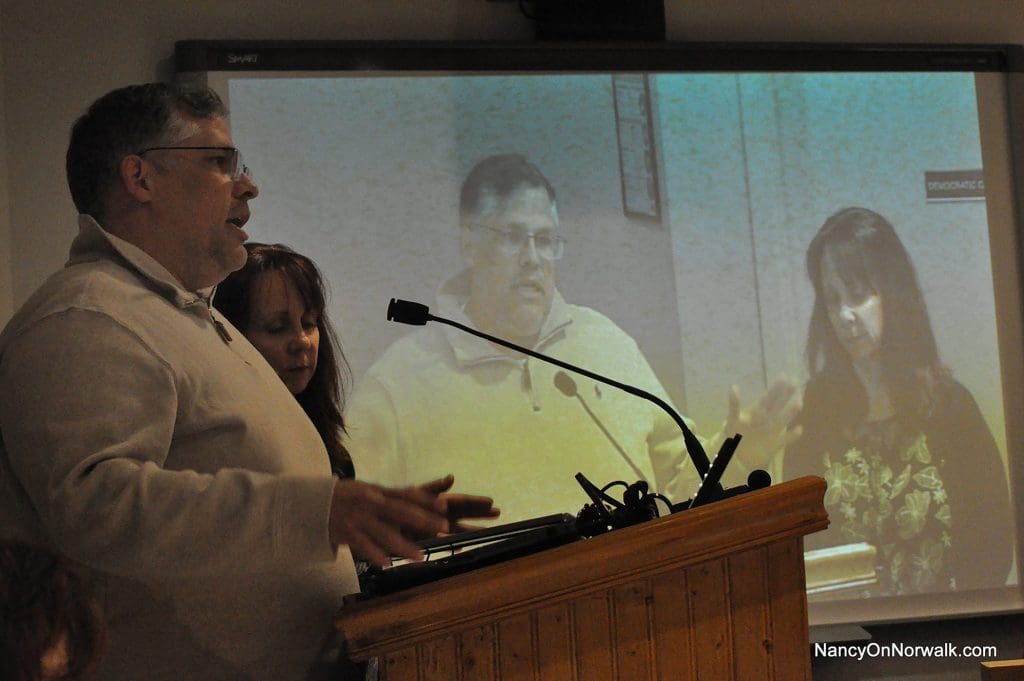 SpEd Partners Co-Chairman Eric Neiderer and Co-Chairwoman Margaret Kozlark speak to the Norwalk Board of Education, Tuesday in City Hall.

NORWALK, Conn. — Here’s a roundup from Tuesday’s Board of Education meeting:

The Board unanimously approved the appointment of Debra Whitman to lead the Norwalk Early Childhood Academy (NECC) without responding to parents who objected to being left out of the loop despite being promised otherwise.

SpEd Partners Co-Chairman Eric Neiderer said he had come home from vacation Monday to find a “firestorm,” parents upset that they found out about Whitman’s appointment via the agenda for Tuesday’s meeting, when it was released Thursday.

Neiderer said he and SpEd Partners Co-Chairwoman Margaret Kozlark had been promised that they would be told when there was a candidate for the job.

“If there are representations made, I think that it’s imperative that the district follow through with those, with proper communication, that there is a true collaborative spirit,” Neiderer said.

“The concerns were that not only were the parents kind of kept in the dark, but that the teachers at NECC were as well,” Kozlark said, adding that the NECC parents have been very organized and vocal, and since Whitman hasn’t met them, “How is this candidate going to have a good idea of what she is walking into?”

Board members say that NECC is a program, not a school, and therefore it isn’t eligible for a School Governance Council, which would be involved in the hiring of a new director. No procedures were violated, they say.

The NECC PTO had been asking to meet the final candidates, “so that we feel that we are part of the decisions that directly affect our children on a daily basis,” PTO co-founder Amy Hodgkins said. “…The answer I should have received is that, ‘Yes, NECC is not required to have a School Governance Council, but let’s form a similar committee consisting of parents staff and community members. Let’s work together.’”

“Many inefficiencies of Norwalk Public Schools’ policies and procedures have been discussed these past few days, yet nobody has stood up and said ‘yes there is a problem’ and ‘yes, let’s collaborate and communicate and work through these issues and come up with solutions to benefit all parties,’” she said.

“If we are not a real school then how can we have real students?” Former Board of Education member Steve Colarossi said, opining that his son, a NECC student, was misinformed because he thought NECC was his school.

Board policy 1011.1 “talks about the importance of community in parenting involvement, not just in schools but in the district wide,” he said. “…the Board should have enforced the requirement that parents be involved in the decision. It’s unequivocal in our policies.”

The policy states that, “Parent input should be sought regarding decisions that affect children and families.”

“We are a real program. Whether we are a real school or not is irrelevant. We have real kids, we have real issues, we have real families and we have a real PTO that was organized not by ex- politicians and gadflies, but by truly concerned earnest people,” Colarossi said. “… These are the folks who deserve to be involved in hiring decisions just as we would anywhere else.”

Approving calendars one year in advance

The Board briefly considered a 2019-20 calendar that features a long weekend in February rather than a week-long February break.

Approving a calendar a year in advance would allow parents to plan, Norwalk Superintendent of Schools Steven Adamowski said, noting that Greenwich, Stamford and Westport have already approved 2019-20 calendars.

No one loves the April break and would rather take a week in February, when it’s cold, Board Chairman Mike Barbis said, but Adamowski and Chief of School Operations Frank Costanzo emphasized the time of instruction ahead of SBAC (Smarter Balanced Assessment Consortium) testing.

Most Connecticut schools have phased out February breaks and Norwalk students are competing with their peers who have more days of instruction before the tests, Adamowski said.

There are also 28 students in the 13-credit diplomate program this year and 47 registered for next year, so it looks like BMHS is on track to have 90 IB students in 2019-20, he said.

NPS is planning to convert the existing Columbus Magnet School into the IB School at Chestnut, a K-5 program. The Board has a longer range plan to offer IB to all grades, and Adamowski said a feasibility study indicates that NPS is on the right course by going for an early grades program first.

There are five early years IB programs in Connecticut, with 100 Norwalk children attending the Rogers School in Stamford to participate in IB, he said.

The IB program for 11th and 12th grades at Brien McMahon cost $200,000 to set up, Adamowski said. Professional development for curriculum is $200,000 over the summer.

Finance Committee Chairman Bryan Meek said he has a friend in Annapolis, Md., who lives hear an established IB school and “you can’t buy a house in the neighborhood.”

“It’s going to be a win-win for us I am sure as we proceed with this,” Barbis said.

NPS is making progress on the new school construction for Ponus Ridge Middle School and on the Nathaniel Ely site, Barbis said.

Common Council member Faye Bowman (D-District B) said last week that the Ely school will likely be delayed because NPS needs to acquire two properties adjacent to Ely, and one owner does not want to sell.

“As with everything in Norwalk, nothing is a layup or easy, but I think we are making progress there and we expect that to continue,” Barbis said. “We are getting cost estimates on those first two projects and it looks like the numbers might be coming in a little higher than the most current, the number for the dollars that were approved. If you look at what was originally proposed for those projects, it’s kind of coming right on. We should have stuck to those original numbers.”

The city in its capital budget process last year allocated less money for the new schools than had been recommended by consultants.

The Board discussed expanding the Summer Academy criteria to include fourth and fifth graders who are substantially deficient in reading, those who perform well below the grade level norm on NWEA (Northwest Evaluation Association) assessments.

Specifically, students who score 20 percent or less would be required to attend summer school to advance to the next grade.

“I think this is so well needed and I am glad,” Heidi Keyes said.

Bruce Kimmel said the requirement is too low and asked for cost estimates on different scenarios.

Adamowski said summer school is funded by Priority School District grants and a small summer school grant. When the Board looks to expand to include sixth graders, there will be budgetary challenges, he said.

An audit of NPS policies done by the Connecticut Association of Boards of Education (CABE) will be addressed in three phases, said Keyes, Policy Committee chairwoman. Since 1986-7

Norwalk doesn’t have 18 policies mandated by the state and the Committee is moving nine policies ahead, she said, naming food service personnel, homeless students, nondiscrimination, migrant students, comparability of service, pesticide application, internet safety policy, fingerprinting and criminal justice information services and sexual abuse prevention as policies that are being worked on.

CABE has recommended modify 69 existing policies and then there are 35 suggestions to consider next year, Costanzo said.

Policies will be discussed in May, Keyes said.

Changes to the Educational Cost Sharing (ECS) formula made last year by the state legislature will help Norwalk, but only if they’re fully funded, Adamowski said.

“I think as we move forward, the advocacy with our legislators is no longer to change the formula, because the CCJEF (Connecticut Coalition for Justice in Education Funding) case was rejected by the Supreme Court. So that issue is over, it’s to fully fund the existing formula which could be favorable to us if it were fully funded,” Adamowski said.

The Common Council voted last week to raise the budget cap by $950,000, ending the yearly budget battle with more funding for the schools.

“It creates a much brighter picture for next year, you are going to be able will achieve all if not most of your budget goals,” Adamowski said, calling reductions “comparatively small.”

The Board was set to vote on a revised 2018-19 calendar, which would start the school year on a Monday, but tabled it so administrators can go over “the actual figures,” according to Adamowski.

The high school program of study was held because the budget wasn’t settled and will be approved next month, he said.

This is planned to increase the credit requirements for graduation from 20 to 26. Juniors and seniors are enrolling for classes now, while freshmen and sophomores must wait until the new program is approved, he said.

The enrolment numbers for the Brien McMahon IB program are fantastic. This is a program that will allow our most gifted students to receive the rigorous education they need to strive and compete at the highest level.

But, just as importantly, it will provide new educational opportunities for every student in the school and new instructional training for our teaching staff. Congrats to the team who has worked tirelessly for numerous years to bring this program to BMHS. Thank you!

Mr. Barbis, how much over cost are the projects at this point?

With the BOE proposing tens of millions in new schools and keeping salaries competitive with our wealthy towns how come they ever ask why Norwalk is the only City in CT not having a 4 year college – yesterday’s “high school” that provides the path way to good jobs.

Is it because the focus is just graduating students ? Knowing that most will never secure a college degree. ?

Every Mayor over the past 4 decades said “they’d look into a 4 year college here”. Sure.

I’m deeply offended by the actions of certain members of the BOE with whom I thought I had an “understanding” based on a series of winks (Mr. Lyons), secret handshakes (Mr. Barbis) and smoke signals (Mr. Meek) that the next NECC director would be hired from Norwalk’s own Clown College {..}. Does the BOE really think they’re allowed to just negotiate employee contracts in executive session, without permission from the Select Committee of Entitled People Who Got to Vote on That Other Thing Once?
Edited to remove an insult, a violation of the comments policy.

Wait. No one likes the April break and would prefer it in February, when it’s cold? Seriously?

We wouldn’t have to worry about an April break if we didn’t have so many tests to administer.

Salt, like some BOE members, misses the point of the concerns raised by my fellow parents.
Asking to participate in crafting the job description, giving input regarding critical competencies and engaging the applicants at some time in the process isn’t a request borne from entitlement.
Rather it is a reflection of parental concern for very young & vulnerable students- our children. Because many of them have been short-changed by the lack of accountability of Norwalk’s SpEd administration, it is only right that our PTO leaders would want to present the families’ perspective.
And, just as an aside, parental input is required by BOE policy.

@Steve Colorassi,
SALT-y doesn’t pay property taxes so Sped folks can hand pick preschool directors at 160k/year. SALT-y is a contributor. SALT-y can’t afford to let amateurs hire teachers at those prices. SALT-y is willing to bet that the non-contributors nearly outnumber the contributors in the NPS. And that’s bad any way you slice it. Fix SALT-y’s problems—and the problems of all the other Norwalk contributors paying for all the demanding non-contributors, and you just might get somewhere.