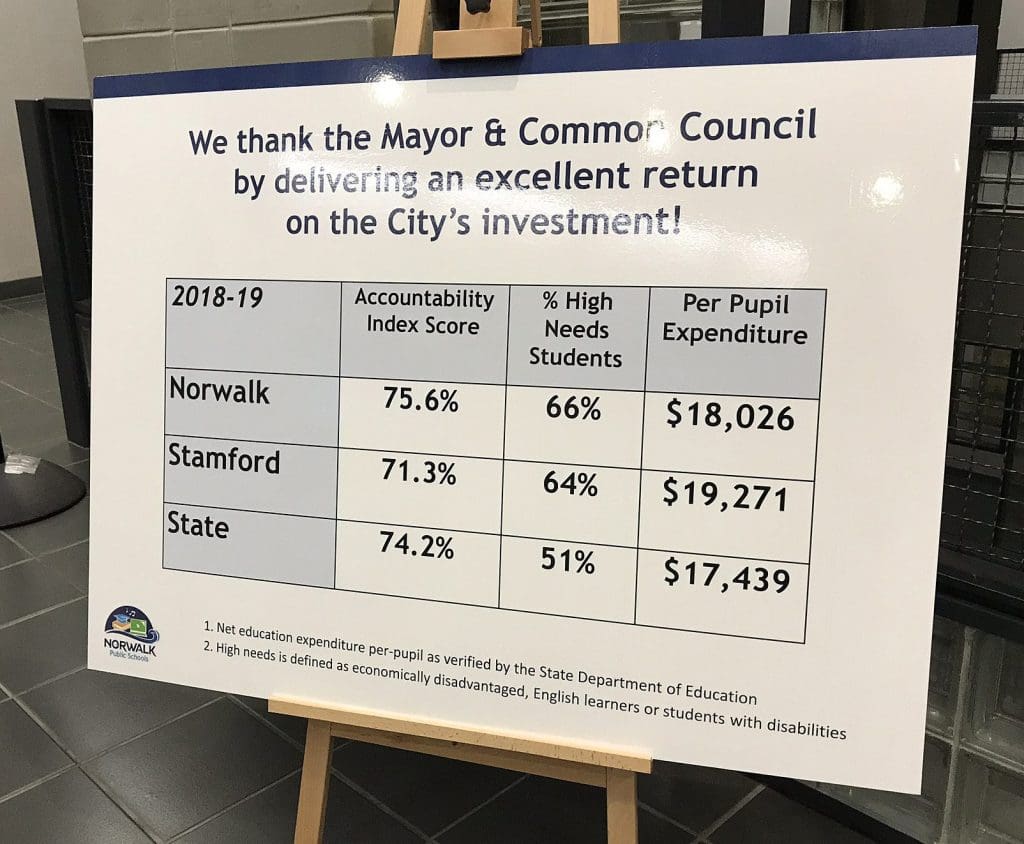 A sign on the third floor of Norwalk City Hall, posted by Norwalk Public Schools.

NORWALK, Conn. – Norwalk Board of Education members on Tuesday took a look at the latest assessment scores, touting successes and touching upon areas of concern – including funding from the City.

“What you see emerging here profile in which our schools are holding their own,” Norwalk Superintendent of Schools Steven Adamowski said. “They’re holding their achievement level, given an increase in high needs students.”

The 2018-19 NEXT Generation Accountability Report shows the Norwalk Public Schools is “still ranked as number one in large cities on our accountability index,” NPS Chief Academic Officer Brenda Myers said.

“When the first accountability plan was published, five years ago, we were in fourth place and this is our is our third consecutive year that we’ve been able to maintain first place,” Adamowski pointed out.

This is the first year that high needs students are a majority in Connecticut, at 51 percent, the super said. Norwalk’s population is 68 percent high needs, a 4 percent jump from last year, mostly attributable to English Language Learners (ELLs).

All of the schools that showed a slight drop in English Language Arts (ELA) and math had a 4 to 6 percent increase in high needs students, according to Adamowski.

“That is going to go up again, for next year,” he opined. “So … we’re in the midst of this budget struggle. But… it is not possible to sustain these results, as our need increases and our resources are not funded at an adequate level. I think that’s the challenge that the district will face going forward.”
The Common Council recently authorized a budget cap that would allow for a $9.9 million increase in the Board of Education’s budget, the largest education funding increase ever, they said. But the Board’s budget request is $18 million higher than it was approved for funding at the beginning of the fiscal year.

The Board’s budget includes $5.6 million for contractual increases in salaries and benefits and $3.3 million for predicted enrollment growth, in addition to $1.9 million to expand ELL programs. A transportation contract accounts for $847,000 and there’s $337,000 for before- and after-school programs.

Board of Education Finance Committee Chairwoman Barbara Meyer-Mitchell has said cuts will be necessary at the level of funding granted by the Council.

Norwalk had two Schools of Distinction in the 2018-19 NEXT Generation Accountability Report, Tracey Elementary and Marvin Elementary.

“It really is quite an honor,” Testing and Evaluation Specialist Diane Filardo said, observing that there are only 162 schools of distinction across the state, in 75 school districts.

“This is all based upon a growth formula of targets and the higher you get, the harder it is to reach the target,” Adamowski said.

It wasn’t due to achievement gap outliers, Filardo said.

In 2016-17, Norwalk had Category 4 focus schools, “among the lowest performing in the state based upon growth of high needs,” Filardo said. “For the past two years, we have had no schools in Category 4. So that’s that is a huge improvement.”

The State is strict about maintaining a high participation in assessment tests because of the possibility of gaming the system, Adamowski explained.

“In terms of actual achievement for accountability, they all would have been level two,” Filardo opined.

“Brookside… I believe the previous two years did make very significant gains. This is the first decline it’s had. But that’s also coincides with a very significant increase in high need students at Brookside,” Adamowski said.

“This is a concern,” Adamowski said. “It has been a concern for the last couple of years. We were hoping it would turn around this year. And I think, you know, as the Board, works on its goals for the next school year and … the new administration decides where going to concentrate… this needs to be a focus.”

“This has been very nice progress at Cranbury after several years of decline, so this is really, really good to see,” Adamowski said. “This has been a concern of ours. As you know, there was a needs assessment, a root cause analysis at Cranbury this year and they are working on an improvement plan to the Board later in the year.”

NPS only scored a 38.1 for physical fitness. This is higher than the state’s score at 33.4.

“We actually conducted a complete audit of our fitness assessment plan,” with the help of retired BMHS Athletic Director Joe Madaffari, Myers said. NPS is working with a consultant and “we’re actually holding elementary, middle and high school fitness committee meetings. And we’re putting together a little handbook for us to say this is the standard. This is the assessment. This is the teaching cycle. This is how we gather the data.”

“This is an area that the state as a whole is grappling with, because we’re coming out of a tradition of gymsports, right? Which don’t necessarily contribute to fitness, and now we’re measuring fitness, you know, as an antidote to childhood obesity,” Adamowski explained.

Finally, Meyer-Mitchell pointed out that NPS is 7 percent below the state score on students who are passing the exams for college and career readiness, and 6.5 percent below on post secondary entrance.

“We have pleaded for the college and career centers that are 12 months and would help students make sure that they don’t experience summer melt, that they have funding in place and a plan in place to start college in the fall. That will help that,” she said.

Board member Godfrey Azima  followed up on that later.

“That’s kind of a misnomer here,” Adamowski replied. “These College Board sets of threshold (for) the SAT … they’re simply saying that anybody who is going to be successful in college or a career needs to be this standard score on the SAT.”

The ELL scores on the SATs are a problem, since some of the students arrive here as teenagers and NPS doesn’t have the time to help them learn before they take the test, Myers said.

“Our ELLs are over performing other ELLs across the state and (are) our smallest gap in high need,” Myers said. “So if you think about high needs population in three ways, special needs students, children living in poverty, and ELLS, our ELL achievement is actually the place where we have the smallest gap, where we’re really seeing an acceleration once we get children into program.” 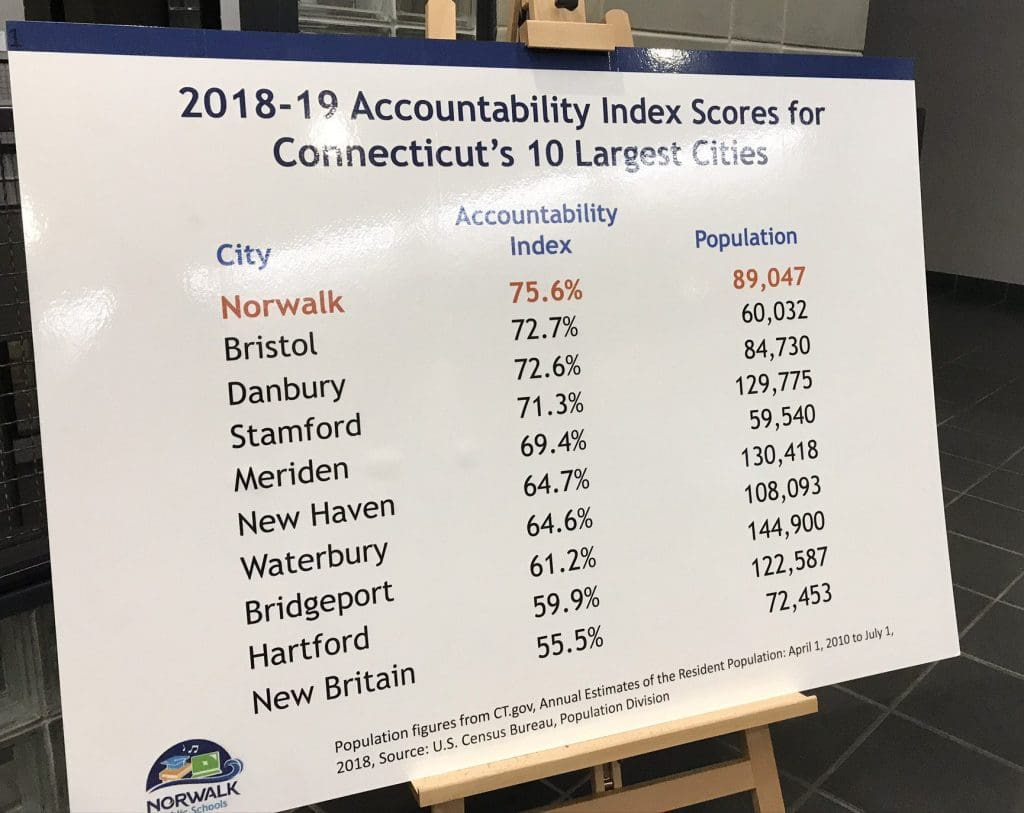 A sign on the third floor of Norwalk City Hall, posted by Norwalk Public Schools.

I can’t believe with this “elephant in the room” topic, that no one has commented on this story. Amazing

These assessments are scued since one child can count in multiple categories. They need to just have each child count once and that is it.

I hate to say it but the competition on that board pictured above is not overly impressive. From an educational standpoint, it’s like Norwalk won the Junior Varsity title. How do we compare with districts who actually send their kids to college?