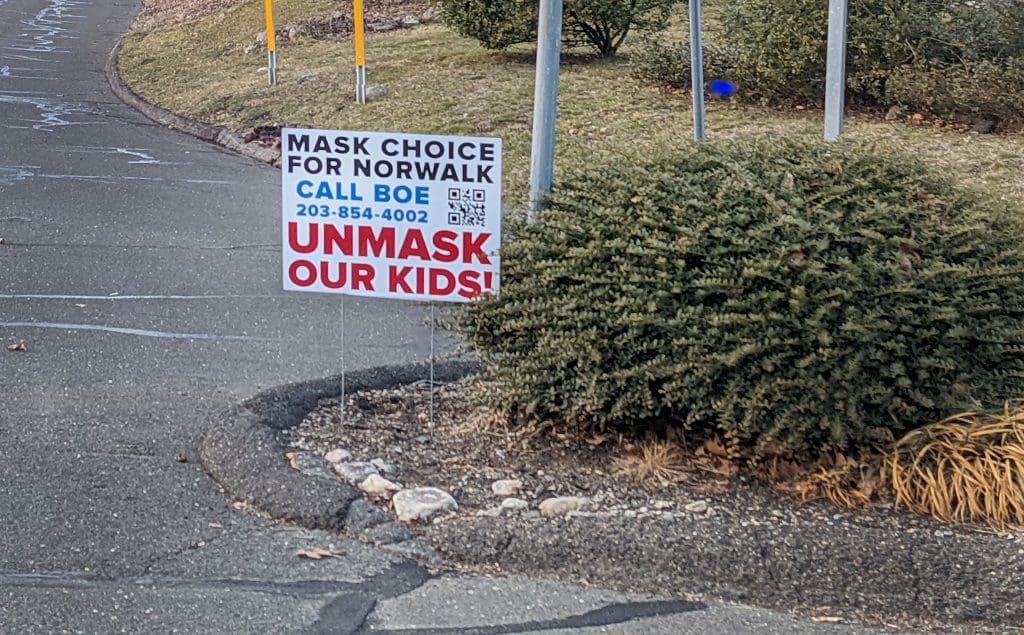 A sign at the intersection of East Rocks Road and Allen Road.

NORWALK, Conn. – Norwalk Public Schools is instituting a “masks optional” policy for its buildings, beginning early next week. Masks will still be required on school buses.

The switch will take place Monday if school is not called off Friday because of the incoming snowstorm, or Tuesday if it is, Norwalk Superintendent of Schools Alexandra Estrella said.

Board of Education members called the decision very difficult before voting 5-3 in favor of making the move, during a special meeting Thursday.

The State legislature voted to leave masking up to school districts as of Feb. 28. NPS responded by surveying parents, and Norwalk Superintendent of Schools Alexandra Estrella reported these results:

That was based on responses from 2,486 households, she said. 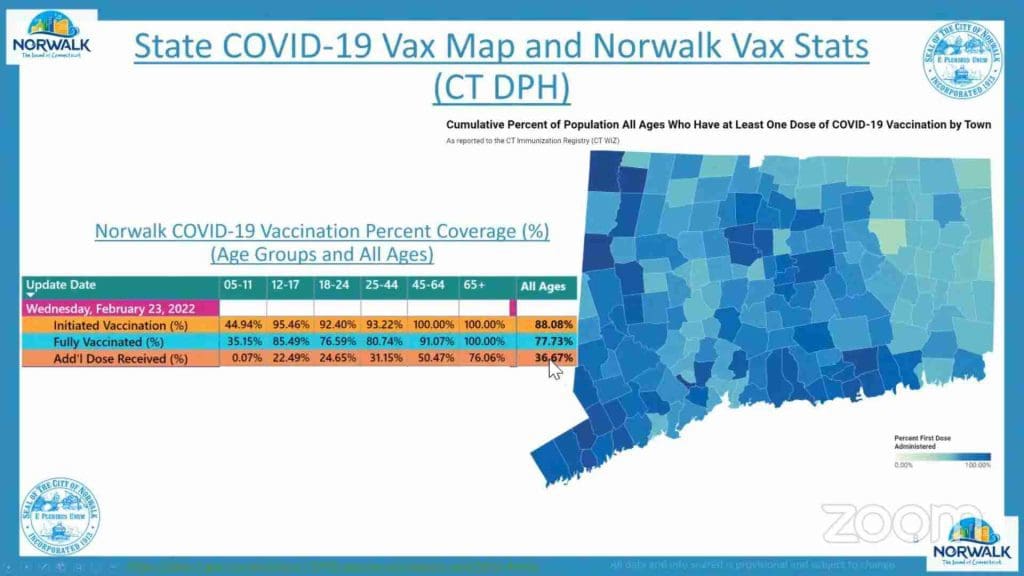 A PowerPoint slide shown by Norwalk epidemiologist Brian Weeks during Thursday’s Board of Education meeting. Vaccine eligibility came later for 5- to 11-year-olds than other age groups, and Norwalk is on par with other Connecticut cities for that vaccination rate, said Assistant Superintendent of Business and Operations Sandra Faioes.

BoE members queried Health Department staff before making their choice. Norwalk epidemiologist Brian Weeks said that 35.15% of the city’s 5- to 11-year-olds are fully vaccinated and 85.49% of the kids aged 12 to 17.

Assistant Superintendent of Business and Operations Sandra Faioes said that as of the 20th, NPS had 13 positive cases. On the 23rd, “we tested 351 students and we had zero positive cases.”

The data shows transmissions happen much more frequently in households than in schools, Faioes said. “That is something that is not unique to Norwalk. It’s across most school districts and across the nation.”

Dr. Norman Weinberger, a Norwalk Board of Health member and a pediatrician, said he wouldn’t drop the mask mandate if it were up to him, because he’s “very concerned” about the 5- to 11-year-olds.

“We are seeing more hospitalizations on these children,” he said. “We are also seeing more long-term effects of COVID. In the young children, multiple systems syndromes is occurring mostly in the unvaccinated. So, this is a danger. And if we can find a way to protect them, I would.”

He reviewed the history: the Delta variant began tailing off and then Omicron came in. Now, with infections dropping, there’s the BA.2 variant, and “we actually don’t know what’s going to happen…. This is not going away. And we’re going to have surges again.”

The resolution passed by Board members specifies that the mandate may be reinstated if conditions warrant it.

Voting in favor were:

“I believe very strongly that the risks in development and socialization and access to a child’s education now outweighs the benefits in masking,” DePalma said.

Children in speech therapy may not be able to see oral motions they need to mimic, children who can’t hear can’t read lips and it’s difficult to read facial expressions with masks on, she said.

“This is a long-term situation. We cannot fail our children in education,” Carpio said.

“I find this a torturous vote. There are very strong data points I see on both sides of this issue,” Flaherty-Ludwig said. “But my feeling is that it is time to lift the mask mandate.”

“I am concerned about this new variant BA.2,” she said. “I think we don’t know yet what the ramifications of it are. We just had a school break here. There were a lot of people traveling and now coming back into our schools, so I am worried about a surge there.”

Yes, the surrounding communities dropped their mask mandates but Norwalk is a city, and Stamford’s mask mandate is continuing to March 15, and Bridgeport’s to March 31, she said.

“Yes, we have been in a pandemic for two years,” she said. “And it’s been a very long, difficult two years for so, so many. But I feel that we are rushing this I think it is premature to lift our mask mandate here in our city.”

Randolph said she also found it to be a “tortuous” decision and she’s concerned about multi-generational households.

“I have been very torn listening to both sides,” Randolph said. “… I know that we’re not seeing particularly the problems with our 5- to 11-year-olds, as far as hospitalizations and you know, overcome with illness, I do feel that we still need to worry about the spread of COVID.”

Azima said he’s in favor of mask options but it’s too soon.

Hosten said he agreed with Weinberger, it would be best if there was a mask mandate continuing everywhere.

“We’re talking about an environment where mask mandates are dropping everywhere. And if I thought keeping a mask mandate in Norwalk Public Schools would move the needle on COVID throughout the city and the state and the country, I would keep the mask mandate,” Hosten said. “I happen to think that we’re trying to empty the ocean with a teaspoon by asking our kids to wear a mask when nobody else is. … I think it’s a little unfair for us to ask our kids to solve COVID when nobody else is really even trying.”

“I do understand that folks are tired of wearing masks,” McCready Brown said. “At the same time, our country has lost almost a million people and there’s still 2,000 people dying every day in our country from COVID, which is about equal to like one 9/11 a day. So we’re still in a really critical, a critical area.”

Hosten made a great point, she said.

In addition to the resolution drafted by Attorney Thomas Mooney, the Board also passed an amendment written by Flaherty-Ludwig.

“We agree to support a MASK OPTIONAL approach,” it said. “We view this not as a victory for one side of the debate or another, but rather a step forward together as we deal with the impact of an active COVID-19 pandemic.”

It said, “We encourage supportive discussions within families and within schools as the transition to a Mask Optional approach occurs.”

Estrella said, “We have MERV 13 filters in our ventilation system, which is an enhancement from that we have that we didn’t have previously.”

Mask optional is a good and fair way to go about it.

This is really great news and Thank You BOE! I’m just curious why it can’t start Monday? What’s a day going to do. But good luck getting the kids to wear them.

Ages 5-11 35% vaccinated.
Ages 0-9 in Norwalk have been the majority 19% of cases.
Pediatrician does not recommend removal of mask mandate in schools YET.
Suggestion to delay to March 15th, similar to Stamford and Bridgeport, did not gain support.
I fail to see why it is a teaspoon effect or peer pressure effect that makes local BOE majority rationalize such important decisions. I cannot understand why waiting a few more weeks, allowing time to process and for concerned families to prepare as best they can did not gain traction. Why Lamont put this decision solely in the hands of BOE is beyond me.
One of my children just qualified for and got his booster, and immunity needs two weeks, though imperfect. Perhaps others would appreciate the time to boost prior to mask-lifting?

Total numbers are down so we can all cross our fingers and hope for the best.
I would have rather seen increasing mask breaks and allowing broader mask-exceptions for those parents/teachers expressing concern for particular children, allow teachers more influence over masking or not in their classes until a few more weeks have passed.

So here we go with another experiment! I will keep my fingers crossed for our teachers & students.

My 7 year old was blessed with a great second grade year thus far, masked. No extended COVID absences, no class shutdowns, no extended teacher absences in her class. I thank masks, vaccinations, and all other helpful protocols that allowed this great year. I hope the rest of the year continues on this track for her, her classmates and her teachers. However, I am concerned and not happy to be crossing my fingers during this transitional period.

I do hope this is a lucky-correct-decision. I hope it’s not a mistake.

If you really want and idea of just how endemic this now is, just poke around at this data. It’s all the same levels for various regions that this data is kept. Mass immunity from the Omicron wave. Keep in mind they do not vax 5-11 year olds in England, so 82% is purely from natural immunity as of Feb 4. Essentially mostly mild disease from here on out which they’re recognizing with getting rid of restrictions.

I find it interesting that there’s no data about how the teachers and staff in Norwalk felt about unmasking. Did they not even ask or what? They only spend 7 hours in the building every day…

Is the BOE going to return to in person meetings?

I think our Superintendent said it best: “Medically fragile students have the option for homebound learning.”

@sarahwaters. it is called choice. I am sick and tired of others telling my family what to do. The schools are not supplying the only masks proven to work. People have a choice to vaccinate their kids. Only 300 kids have died from Covid. More than that die in one year from the flu. Teachers, parents and adults are attending Super Bowls unmasked, parties, bars etc. Time to stop making our kids pay the price for the stupidity of adults.

Jon Hempstead If it’s endemic then take away the quarantine and isolation requirements. One of my points/concerns is that the current “ policy” really, in my mind, does not serve to mitigate that hugely negative impact on the schools/children. It’s inconsistent.

Also I would like to know where are Norwalk Public Schools tests? I did not see this guidance reflected in the eblast from NPS.

“Before Feb. 28, school districts can expect to receive additional shipments of self-tests to distribute two kits per student and staff member. Each kit contains two tests. In schools discontinuing universal indoor masking beginning Feb. 28, kits should be used by all staff and students to self-test just prior to the lifting of universal indoor masking. Ideally, one test should be performed at home in the morning prior to leaving for school on the first day optional masking is implemented.”

And here is a link to the full press release:

To Concerned Citizen, if I understand correctly, the survey was only accessible to parents of students in Norwalk public schools, and each household could only respond to the survey one time. So any teachers or other workers weren’t able to participate in the survey unless they also happened to be a parent of a NPS student.

12,300 children have died of Covid worldwide, according to UNICEF. 1,015 in the United States, according to the American Association of Pediatrics. It was the 6th leading cause of death in children 5-11 this year.

Just so we have our numbers correct.

Imagine if our BOE spent as much time on securing Norwalk student achievements that meet CT Edu standards as they do discussing masks ? Why give the BOE more monies when they’re unable to improve our depressing student performance ? In Norwalk higher school administrators salaries don’t improve student achievement.
Funny way to run a school system. Taxpayers have nothing to say ? Lost hope.