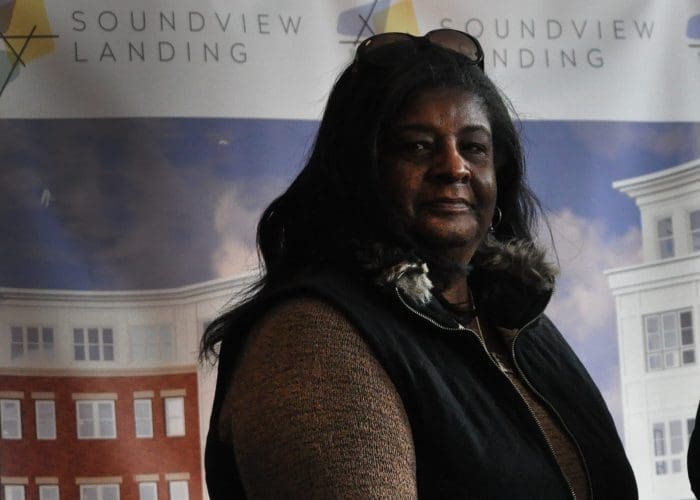 NORWALK, Conn. – The annual NAACP Freedom Fund banquet, which last year reflected a deep rift between the Board of Education and the black community, takes place Friday. NAACP President Brenda Penn-Williams says tickets to this year’s event have been purchased by all the women on the BoE – and none of the men.

No one from the Norwalk Public Schools administration has bought a ticket either. Regardless, this year’s event is sold out, Penn-Williams says, adding, “My committee has done a great job.”

Last year, BoE Chairman Mike Barbis urged board members to boycott the NAACP banquet, then denied having done so. A Freedom of Information Act request by NancyOnNorwalk produced the Oct. 5 email in which Barbis had, in fact, urged BoE members not to attend.

The FOI request grew out of a rumor that Penn-Williams had been removed from the Norwalk High School substitute teacher list after addressing the BoE more than a year ago at a meeting that turned contentious.

NPS Communications Director Brenda Wilcox Williams did not answer an Aug. 12 email asking if Penn-Williams had been restored to the substitute list. Penn-Williams said Sunday that she has not.

The meeting that precipitated both the removal and the boycott took place in September 2018, when Penn-Williams criticized the board’s handling of several issues. Civility was lost as she continued to speak while Barbis banged the gavel to hold her to three minutes.

Meek recently characterized the NAACP president’s remarks as a six-minute “rant against staff.” Penn-Williams said her remarks did not constitute an attack. “I go there with truth; I asked questions with truth and facts…if asking a question means you are attacking them then it sounds to me like they need to go back to elementary school.”

Despite attempts by Mayor Harry Rilling to arrange and mediate a sit-down between Barbis and Penn-Williams, no such meeting has taken place, an observation Meyer-Mitchell made even as she declined to speculate as to why the men aren’t attending.

Meek, who is seeking reelection, said this year’s banquet coincides with his mother’s birthday. “I’m sure we’ll all catch up at any one of the other dozen good causes we sometimes have chance to attend.”

BoE member Sarah LeMieux, who apologized last February for “the very deep sense of division and disconnection that has grown between the Board of Education and the members of the black community in the last few weeks,” has said she skipped last year’s banquet only because she had had other plans. On Monday, LeMieux said she is going this time.

Meyer-Mitchell is, too, because she and her husband “support the mission of the organization, to advocate for equity and justice, and the event, to provide scholarships for students. I am pleased that my colleagues will join me this year, as I am sure it will help build bridges in Norwalk, which can only benefit us all.”

Julie Corbett said, “My work schedule and my husband’s ability to take care of our toddler that night permits me to attend the event Friday night. Though it does mean I will only see my son for 30 minutes that day. That is the logistical arranging I had to do to allow me to commit to an outside of normal BOE-related event.”

No other Board members replied to the email from NancyOnNorwalk asking why they were or were not attending the dinner.

A clip of Brenda Penn-Williams speaking to the Norwalk Board of Education on Sept. 25, 2018:

NON, Did you miss my name on the banquet list? Have had my ticket for weeks.

This is a wonderful event and congrats to Mike, David, Rovitta, Deidra and Barbara on your awards.
We should always try put our differences aside when it comes to making Norwalk a better place. All of the honorees have worked hard to do just that. We may not always agree with some that work behind the scenes, but we can still say thank you to those who have made it a better place.
Sorry my family and I can not attend this year due to a wedding, but we will be there in spirit and back next year.

sorry I can not attend this year but I will be in New york with my daughter for her chemo treatment and then back to jersey with her.
wishing all much success and have a great evening.

Lisa, I don’t have the banquet list. The information stems from a conversation with Brenda Penn-Williams.

Carol, all the best to your daughter in her fight! Family always comes first! Sending good wishes to you both.