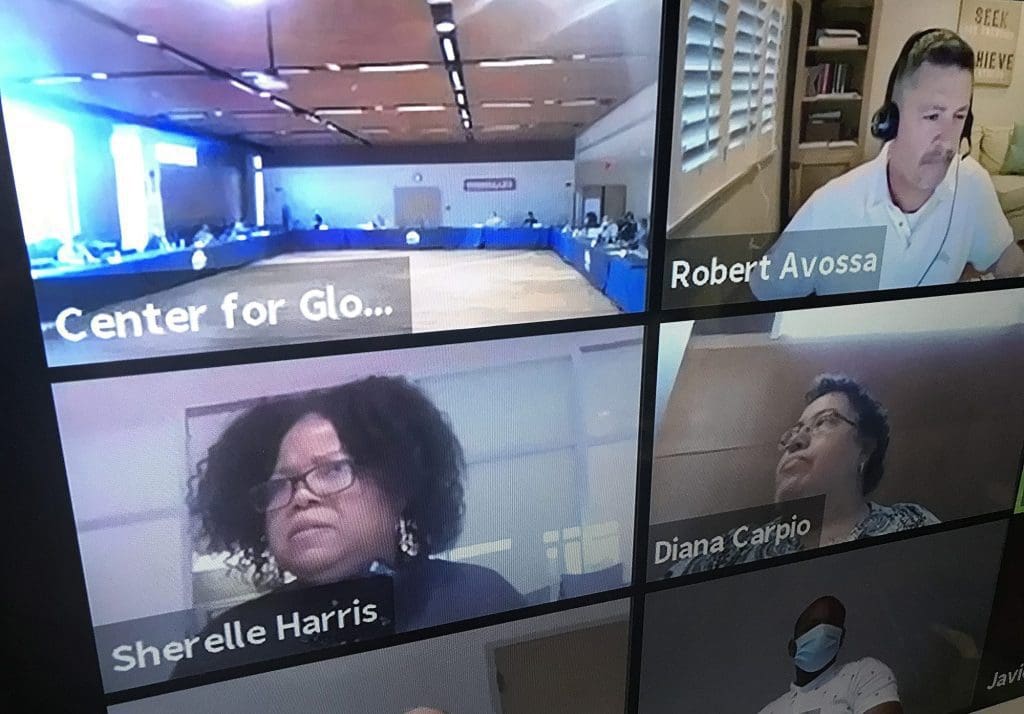 A YouTube video of Thursday’s Norwalk Board of Education retreat. At left is BoE member Sherelle Harris, reacting to feedback from the PA

NORWALK, Conn. — Board of Education retreats are “tricky” even without COVID-19 as a challenge, Freedom of Information (FOI) Commission public information officer Tom Hennick said Monday.

“Some boards believe they are private. They are, of course, not. So, boards must notice them, and the general public must have access if it chooses,” he wrote.

So if “access” is provided but the public can’t fully hear what’s being said, did the Board of Education meet its FOI responsibilities?

“I guess in short, the only way I could see (and my opinion only) a real FOI problem would be if the public was deliberately denied access,” Hennick said.

Norwalk’s BoE began its seventh annual retreat Thursday evening and continued through early afternoon Saturday. The session was physically closed to the public but broadcast on YouTube. Audio quality was sub-par.

The sessions began late, frustrating anyone attempting to attend virtually. This happens with City meetings as well.

NancyOnNorwalk videographer Harold Cobin was among those trying to check in and finding nothing posted.

“The inability of the Board of Education to begin its online meetings anywhere near their scheduled start times indicates a need for a change in state law. Any online municipal meeting that does not begin streaming within three minutes of its scheduled time should have to be rescheduled and reposted,” Cobin said.

He continued: “The public has no way of knowing why a meeting hasn’t started and shouldn’t have to guess whether it will begin, and if so, when. This is no longer new technology and the time to get past the learning curve has past.”

“In our current situation, the Governor’s Executive Order requires that real time access be provided electronically for those meetings being held virtually or even partially so. It sounds like they tried but the technology betrayed them. Unless they were fully aware that their video feed was horrid and that the public was being shut out, I’m honestly not sure our commission would have the jurisdiction to find a violation for failed technology. Starting late would be annoying but also probably not a violation as long as no business was being conducted before the announced starting time.”

“I still say they need to visit the regulations concerning online meetings. Is the start time opened ended, so a 6 p.m. meetings could start at 8 or 10 or midnight? Does the meeting organization have to provide some sort of online advisory that it still intends to meet?

“What are the regs concerning a public meeting that’s delayed because of a technicality: power outage, sound system failure, minor fire that requires evacuating the meeting site for a period of time (30 minutes, two hours, four hours?). Bottom line, when does a meeting have to be rescheduled?”

There ought to be a law that the school board is allowed to retreat in private so long as it discloses what was discussed about school business.

This used to be a wonderful opportunity for the board members to sit and break bread and discuss personal differences and how to work better together.

That changed when a current board member, then a citizen, insisted on interjecting themselves in the process dragging the press along.

From then it just turned into regular board meetings, 20 hours of them, over three days with a watered down self assessment.

With 100s of hours of other meetings and discussions available to the public, it’s insane that this board can’t have one set of meetings to itself.

I’m not talking about secret deals and giveaways like happens in the council’s myriad private meetings. I’m just talking about a few hours unfettered from public eye for people to work on getting along.

Starting a meeting late (online or otherwise) is disrespectful, to say the least.

Put it on you tube after the fact or on District website.

Oops wrote before I had correct info. on board mtgs.