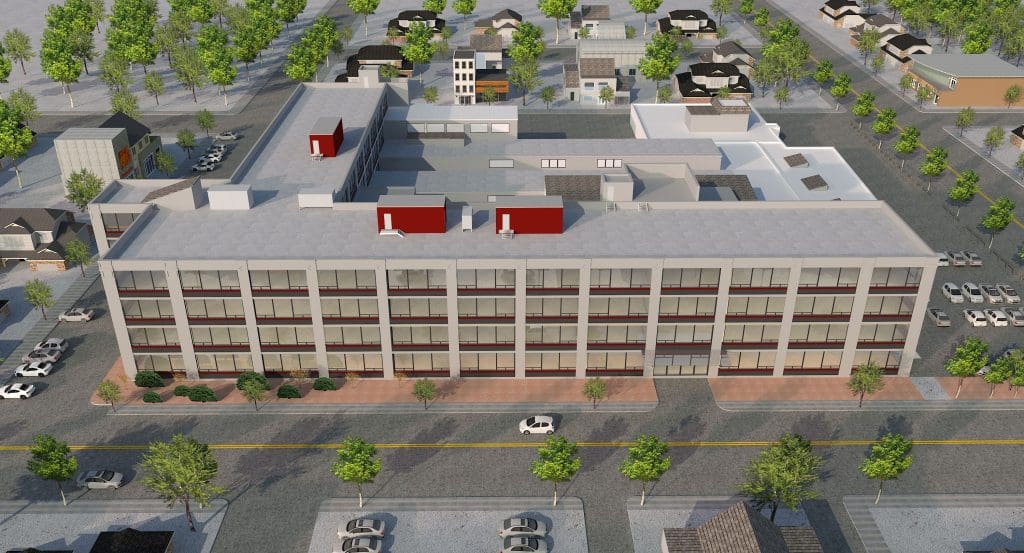 A rendering of 25 Van Zant St., in East Norwalk. (Contributed)

NORWALK, Conn. – Some news announcements for you:

“The internet of things, or IoT, is a system of interrelated computing devices, mechanical and digital machines, objects, animals or people that are provided with unique identifiers (UIDs) and the ability to transfer data over a network without requiring human-to-human or human-to-computer interaction,” IOT agenda explains.

“{L}eading technology companies including GE, Samsung, Microsoft, Intel and Siemens are in discussions to showcase 5G, citizen broadband radio service, multi-gigabit and microwave gigabit technologies throughout the building. The building will provide its tenants tomorrow’s technology to enhance corporate learning and workforce training,” the release said. “The anticipated ribbon cutting is the fourth quarter, 2019.”

“Our intent is to be an integral component in developing Connecticut’s viable, educated and dedicated workforce,” Baum is quoted as saying. “The nation relies on trained workforce-ready personnel who are driven to become part of our growing economy. This will be a huge advantage to trade schools and companies that domicile in our future-proof building.”

Before the revamp, Baum also pioneered an urban farm in part of the building which he unveiled publicly in the fall. Baum in November said he and his team were developing “cutting edge” techniques to offer hydroponic lettuce, basil, arugula and bok choi to Norwalk residents and businesses.

A farmer’s market will “probably be running by this summer,” publicist Skye Riss said Thursday.  “Win also found someone to help him grow mushrooms.”

Mayor Harry Rilling on Thursday presented two donations of $25,000 each to the Norwalk Domestic Violence Crisis Center and Literacy Volunteers, the two nonprofits that were selected as the beneficiaries of the 2019 Mayor’s Community Ball, a press release said.

“The Mayor’s Ball is an annual nonpartisan, nonpolitical event that brings people together. The money raised was unprecedented and is going to some great organizations that are doing critical work in the community,” Rilling is quoted as saying. “Thank you to all of the sponsors and guests who helped us raise this record amount of money. The community gave back, and I know these funds will impact thousands of people.”

“The Norwalk Domestic Violence Crisis Center (DVCC) serves the towns of Norwalk, Stamford, New Canaan, Darien, Westport, Weston and Wilton with representation behind the bench for victims in both Norwalk and Stamford courthouses starting at the arraignment,” according to the release. “In addition to legal advocacy, DVCC provides individual and group counseling for survivors and their children, sustainability, such as financial education, credit repair, job and housing advocacy, as well as two safe houses each sleeping 15 people per night, and preventive education in schools and youth groups, hospitals, medical practices and private businesses. DVCC is committed to providing services, support, and education for the prevention and elimination of domestic violence in Connecticut and beyond.”

“We are overwhelmed by this support,” Norwalk DVCC Board Chairman John B. Watkins is quoted as saying.

“Literacy Volunteers, a program of the Norwalk Public Library Foundation, teaches adults to read, write, speak and understand English so that they may achieve their personal, educational, employment and civic goals. Monthly, they serve approximately 450 students who hail from over thirty countries. Some students are well-educated and others have had little access to education; however, all share the same goals of wanting to improve their English to better their lives and become better advocates for themselves and their families,” the release said.

“These funds will go a long way to helping immigrants learn a new language and get acclimated to their new city,” Norwalk Public Library Assistant Director Sherelle Harris, who manages Literacy Volunteers, is quoted as saying. “With this money, we will be able to expand our programming to more people. We appreciate the support from the Mayor’s Office and Norwalk community.”

“These two organizations are full of people whose work and goodwill ultimately impact all of our lives by helping their clients understand they are not alone in whatever circumstances they may find themselves. It’s where hope becomes a reality,” Lucía Rilling is quoted as saying. “Thank you to the staff for working so hard on this event and to my husband Harry Rilling for helping make a positive impact. I applaud your collective and collaborative efforts.” 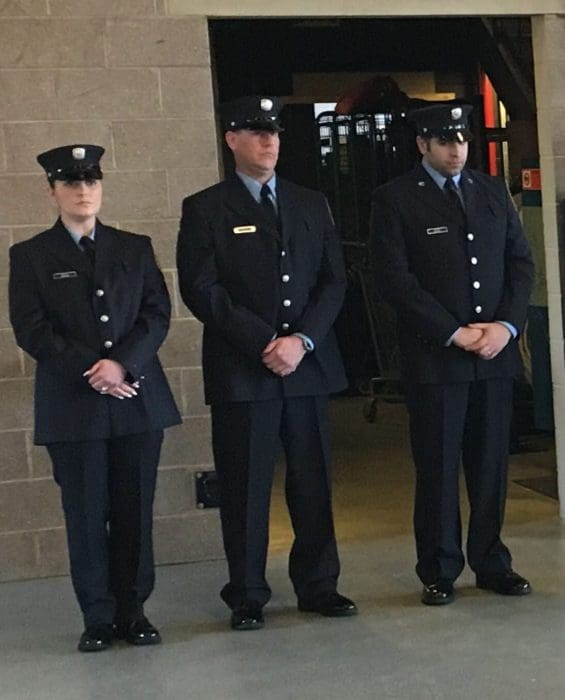 The Norwalk Fire Department held a promotional and swearing in ceremony last week at Norwalk Fire Headquarters. Probationary Firefighters John Pomponio, Madeline Jankowski, and Gregory Petriccione were officially sworn into the Department and Firefighter Jesse Granton was promoted to Fire Inspector after eight years of service, according to a press release.

Fire Chief Geno Gatto, and Assistant Chief Chris King presided over the ceremony, while Mayor Harry Rilling and Pastor Oscar Destruge and Larry Bentley, both Fire Commissioners, read the oaths of their positions.

Kristen Curran joined the Norwalk Police force in late February.  She previously served for three years on the University of Connecticut Police Department.  “Officer Curran has a degree in finance from Fairfield University and has a brother who is a police officer in New York. Officer Curran will be assigned to the Patrol Division upon completion of the Field Training Program,” according to a statement.

All good news, especially the Mayor’s Ball checks to the non-profits. It was a fun party for two good causes!

Having the Norwalk Mayor’s Ball in Stamford! Great endorsement for Norwalk – NOT!!

Milly, Norwalk does not have a venue large enough for the event.

Milly, I thought the same thing. I attended the Ball some time ago then have considered the past 2 years but decided Stamford would be out of the running for me due to distance and well, it’s Stamford not Norwalk for a Norwalk celebration.

Also a great option as it has 120 hotel rooms.

City Clerk Donna King, who is part of the volunteer committee which organizes the Mayor’s Ball, describes the proceeds as follows:

“The net proceeds were approximately $60,000. $25,000 was given to each charity for a total of $50,000 donated. The balance is retained by the 501c3. It is retained as seed money for next year’s event as well as some smaller donations that are used for other charitable uses.”

A clarification has been added above.