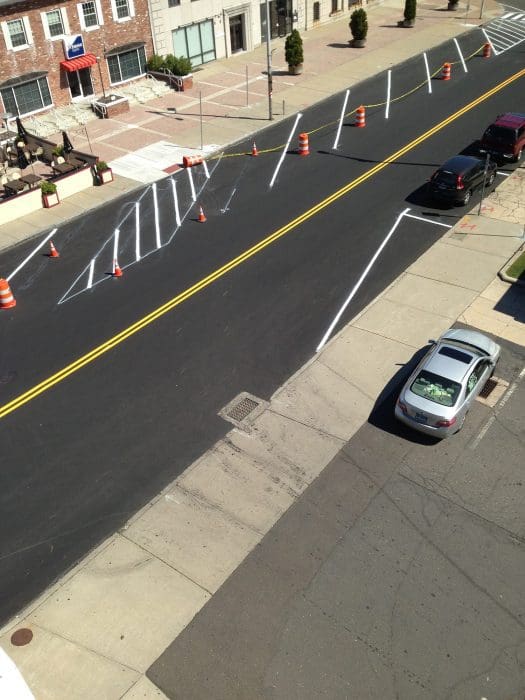 NORWALK, Conn. — Efforts to alert the public to a major shift in the Wall Street area failed in at least one case.

“Did someone make a mistake by painting the new parking space lines on River Street, the wrong direction? The are angled AWAY from the direction of travel, on one side of the street. Are cars supposed to back in? Are cars going to need to make U-turns to cross traffic to pull in front first?” Kieran Droney wrote to Mayor Harry Rilling on Tuesday.

“No, there has been no mistake,” Rilling replied. “Norwalk is following the ‘reverse angle parking’ trend.  Cars will back into the parking spots.  With angled parking, backing in has been studied and found to be much safer.  Backing out into traffic is dangerous as the sightline is very poor.  Pulling out gives the motorist a much clearer view. This is a trend in many cities both here and abroad.”

Talk of changing the Wall Street area parking goes back years. The Norwalk Parking Authority unveiled its plan at a public meeting in February and the Wall Street Neighborhood Association has been involved in the discussions; WSNA President Nancy McGuire has buoyantly endorsed the concept at several public meetings.

“Any effort to improve parking for the Wall Street area is much appreciated by the area businesses, residents and WSNA leadership,” the association said in a statement.

“Many knew,” he replied.

“I do not believe so – change is difficult for many,” Rilling replied. “There was angled head-in parking on Wall Street many years ago.  Backing out into traffic is much more dangerous and much more likely to cause accidents.”

Rilling said he “had no idea” why Droney was unaware of the plan. “It has been discussed extensively.  Moreover, the Wall Street Association has been involved in this and has been very supportive.”

“Parking ambassadors went door to door last week with fliers and explaining what was going on,” Director of Transportation, Mobility and Parking (TMP) Kathryn Hebert wrote. “They also handed out pay by cell cards and directed them to the parking customer service office and contact info inside the ydg {Yankee Doodle Garage} for assistance. If no one was available they left the flyers in the mailbox and then went back over the week and of course this week and beyond.  They are spending time answering questions etc.”

Norwalk Chief of Economic and Community Development Jessica Casey and Chief of Operations and Public Works Anthony Robert Carr discussed it at length at the most recent Wall Street Neighborhood Association Meeting, Chief of Staff Laoise King said. “The ambassadors are also present on the street to help direct customers to utilize free parking at Yankee Doodle Garage.”

“This is the same person who complained last year every day when we paved the wall lot last year,” Hebert said.

“The reverse angled parking is being used by a number of Cities throughout the US,” McGuire wrote.

“I can say, though, that I have used reverse parking in some cities including Austin, Texas,” McGuire wrote. “Its odd at first, but it is certainly easier than parallel parking.  It was much easier to leave the space as then, pulling into traffic going forward.  Loading at the back of your car is safer.  It is safer for bikers. Angled in general parking slows down the traffic.”

NancyOnNorwalk added bolding to the email exchange between Dorney and Rilling to increase its readability.

Smokey, traction-control disabled burnouts upon exit from these spots. Allowed or frowned upon?

That should be required viewing for the skeptics, especially the ones who routinely back into parallel spaces after signaling to drivers behind them their intention, but who think backing into a reverse-angle space is some kind of new bizarre effort. It’s the same thing, only easier.

It actually requires using less space on the street than parallel parking, basically a car width instead of a full car length.

If they can get used to it in hundreds of other cities around the country and the world, because it’s proven to be safer by reducing accidents and injuries, then I’m sure Norwalk drivers can figure it out too. Watch the video!

Smiling as I await the day the reverse parking is reversed.

Generally no different than parallel parking and shouldn’t be a big deal. Except for the fact that if you have seen many people try to parallel park, I wouldn’t be too thrilled to see them trying to ack in next to my car. Many of today’s drivers don’t have much experience backing up and quite frankly, aren’t very good at it. Let’s see how many of those parking signs get taken down. Hopefully we will see a quick study on the number of reported parked cars hit in that area to see if there is any significant increase. And hopefully they didn’t do it in front of any outdoor dining where the car exhaust will go directly onto the sidewalk instead of towards the roadway.

The question I have is the cost for this – between $50,000 – $75,000? Why so much money to draw new lines? This is the price the city pays for letting parking lots become sites for apartment buildings. Now the city is also going to let cars park going down the hill on Mill Hill. How are these people going to cross the street to Head of the Harbor without creating a dangerous situation? And the city is putting a bike lane going up Mill Hill (to be able to ride up Mill Hill you would have to be a former Tour de France athlete) and where do these cyclist go when the bike lane ends when they reach East Ave?

Its gonna be chaotic and study’s are bullshit. It works on paper but in reality, there will be a flow of new traffic heading towards mall. It will wall street has now become narrower. Now, someone will have to pass a spot and back in with someone likely behind him. It will create a bottleneck in flow and slow things down if more than two people have to park at same time… headfirst angle parking would have been better. It puts the burden on a stationary driver that is parked to come out when pulling out as opposed to the burden on the driver behind the person trying to park. In addition, one of the guys from the company (specialty marking) marking the street lines said and I quote “this is the most idiotic idea they have seen” for this area. The guy has been doing this all up and down the east coast and no one has done it. Let’s not compare Ausin Texas to Norwalk. It will be a disaster and will eventually be redone and the consultants will be blamed… consultants are paid to spew BS and influence decision makers. I know, I used to be one..

More parking in the Wall Street area is good.

I think people will figure it out once they see other cars parked in the backed in style.

First time I’ve ever heard of this BACK in angle parking only that there would be angle parking… good luck on that one …just waiting for the many seniors in this town trying to figure it out never mind the ones who do not read English..this town has some of the worse drivers I’ve encountered. I have lived in Manhattan Boston and Los Angeles..they don’t even consider obeying driving or road laws or etiquette in this city

It was a stupid idea inthe 1940s (one wonders, if it was so terrific in the “old days,” why did they see fit to change it?) And it’s a stupid idea now. I seemultiple lawsuits in the city’s future.

cool, my only concern is back into a space as the vehicles behind you do not stop & wait, they wanna pass… UGH

People like nose-first parking because it’s easier. Backing up into a parking space without hitting other cars, signs, and other obstacles takes a bit of skill. And backing out of a parking space is easy because there’s nothing to hit… except for oncoming traffic.

And there’s the rub. I suspect there’ll be a decrease in traffic accidents from these new stripes, but an increase in minor scrapes and bumper dings. The latter are annoying, the former are more dangerous.

It’s somewhat like the use of red-light cameras. The number of dangerous and injurious or fatal T-bone accidents goes down from people not running the red light. But the number of minor rear-end fender-benders goes up as people stop short and the ones behind are tailgating.

All of Austin Texas is like this. It works great.

Good luck with senior citizens trying to park on Wall Street now. When I had shoulder surgery I realized why many of them drive so slowly. When you have limited mobility, it’s hard to look over your shoulder or even make good use of your mirrors. On I-95 I was afraid to drive anywhere but the right lane. Backing into a parking space would be a major challenge.

This is an absolute waste of time and money there are roads that still need to be paid that they paint it parking spaces on so let me guess when it’s time to pay these roads they have to get painted again the lines make no sense people are going to be bumping into other people’s cars trying to back in little old ladies or older gentlemen’s the town really needs to give this project cup it’s all about money putting parking meters and places that parking meters and never existed and over God knows how many years to pay to park to running to a quick store real quick so you’re telling me I have to pay to park to go inside my bank get real noggas becoming something else they want to be like Stamford S.M.H……

The area of wall street was fine, 2hours free parking. This is another way for state to put their hands in your pocket.

On the contrary @Lawrence.

This one is all the City. Or more specifically, the free-range parking authority, who then uses the parking fees to advertise businesses through Norwalk Now.