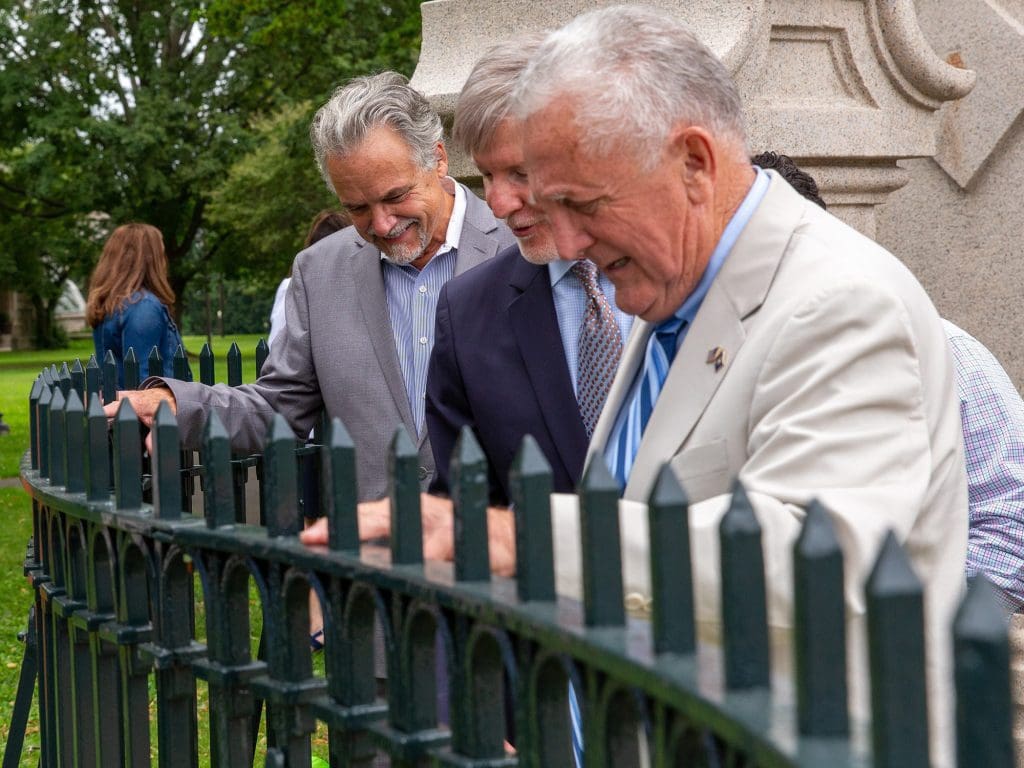 NORWALK, Conn. — A major project at Lockwood Mathews Mansion Museum was officially commemorated Thursday by State and City officials gathering on the site.

Back in 2015, the Norwalk Historical Commission under the leadership of David Westmoreland suggested that the Connecticut Department of Transportation could “mitigate” some of the hardship the Walk Bridge construction will inflict on Norwalk by paying to repair, restore and reinstall the original iron fencing, gates and associated masonry at the original entrance to the mansion, an historic site just inside the entrance of Mathews Park on West Avenue. ConnDOT eventually agreed. 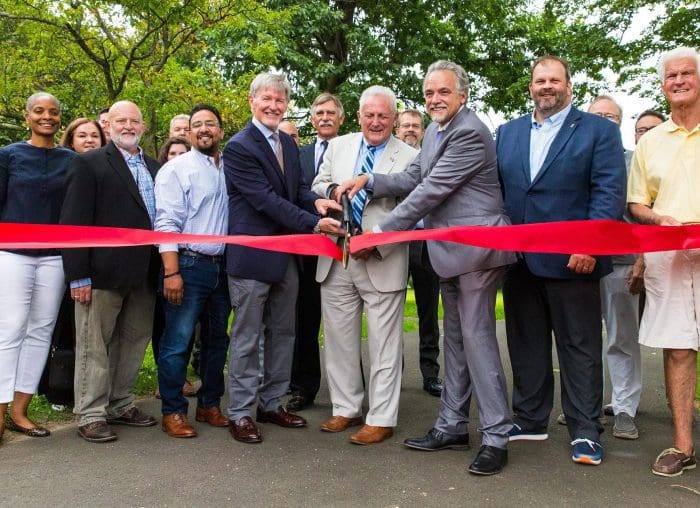 The $1.2 million restoration work is complete and on Thursday, ConnDOT officials presented a plaque to Mayor Harry Rilling to commemorate the project.

“Together, we all worked to address the impacts of the Walk Bridge Project on the surrounding areas,” ConnDOT Commissioner Joseph Giulietti said in a news release. “We did this for the benefit of the community and the public. This partnership represented a commitment to the people we serve and being able to lead this project on behalf of the State was a privilege.”

McNamee Construction of Waterbury began construction in April 2020 and completed it in May, the release said. “The project involved removing and restoring the original wrought-iron fence, cleaning, relocating and restoring nine driveway monuments to align with the sidewalk, and installing the newly restored wrought iron-fence panels and masonry work.”

The Designer/Engineer of Record for the project was HNTB, with restoration work completed by Architectural Ironworks of Plainfield, repainted by NikLyn Corp. of Durham and installed by Eagle Fence of Plainville, according to the release. 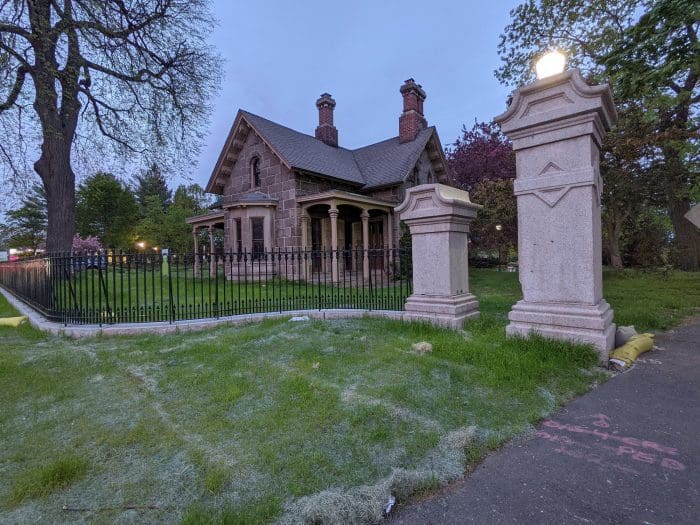 Outside the Lockwood Mathews Mansion Museum, in early May.

The 62-room Mansion, owned by the City, was built in 1868 by financier LeGrand Lockwood, the release explains. It is one of the earliest examples of French Empire Style architecture in the country and was designated a National Historic Landmark in 1971.

“We are blessed in Norwalk with a robust and storied history,” Mayor Harry Rilling is quoted as saying. “It has helped shape who we are today, and we remember that history as we move into the future.  I appreciate the partnership with the Connecticut Department of Transportation as we have been able to preserve our historic resources.  This kind of stewardship and care ensures we can keep these treasures intact for future generations to enjoy.”

“We are grateful to the Connecticut Department of Transportation and delighted to celebrate the installation of the historic Lockwood Family era iron fencing along West Avenue,” said Patsy Brescia, Chairman, Board of Trustees at the Lockwood-Mathews Mansion Museum, in the release. “It celebrates the elegance of the Mansion and introduces Mathews Park to the heritage of this National Historic Landmark.”

The State is repairing the 121-year-old railroad bridge over the Norwalk River, referred to as The Walk Bridge, in a construction project expected to last 5-6 years. In conjunction with that work, ConnDOT is also, or already has, repairing every railroad bridge in Norwalk. This is planned to include extensive work on East Avenue and ongoing detours.

Other side-effect bonuses for Norwalk include the new seal tank and 4-D theater in the Maritime Aquarium. Those are thought of as “replacements” as the aquarium’s IMAX Theater must come down to provide construction space for the Walk Bridge construction.

The existing Walk Bridge is thought to offer an iconic look for SoNo. As it wasn’t possible to replace the look, the Historical Commission sought an historic-oriented “mitigation” from the State. 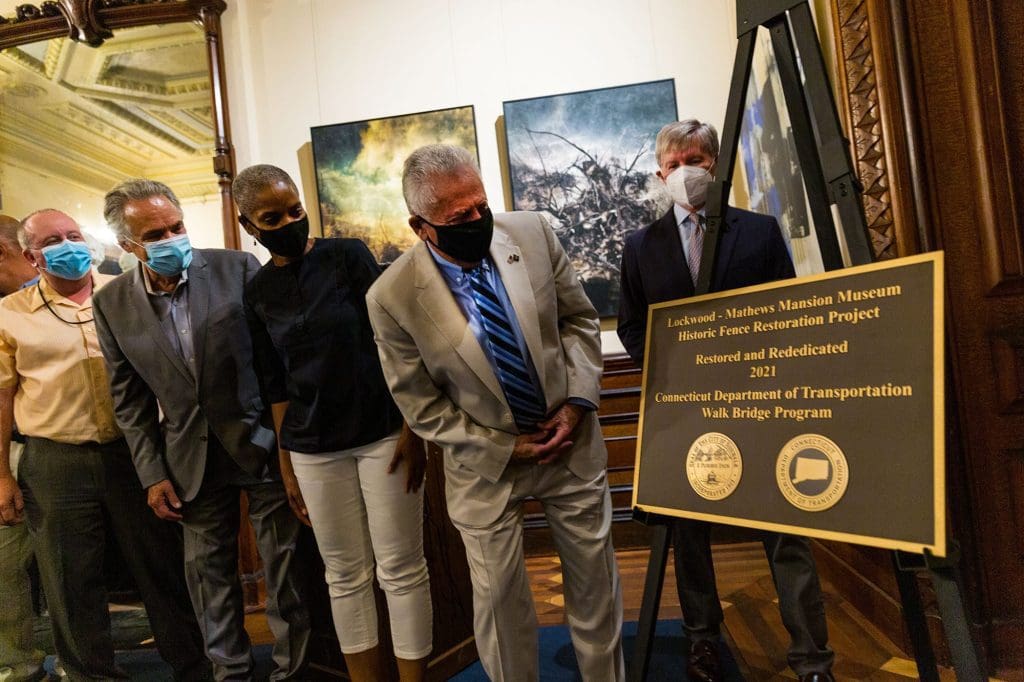 Isn’t that nice. It’s always a wonderful thing to hear how history is being preserved to continue to enhance our wonderful City, especially for the children who will eventually inherit our efforts.

We do need the City to respond to our numerous requests in maintaining our natural ponds, clearing it from the man made poisons they enabled to continue to ruin one of our greatest assets.

Did they put the AC in yet? Maybe the kids can cool off there instead of being sent home early from the schools that still don’t have AC. Maybe when those buildings turn 150 years old we can put AC in them?