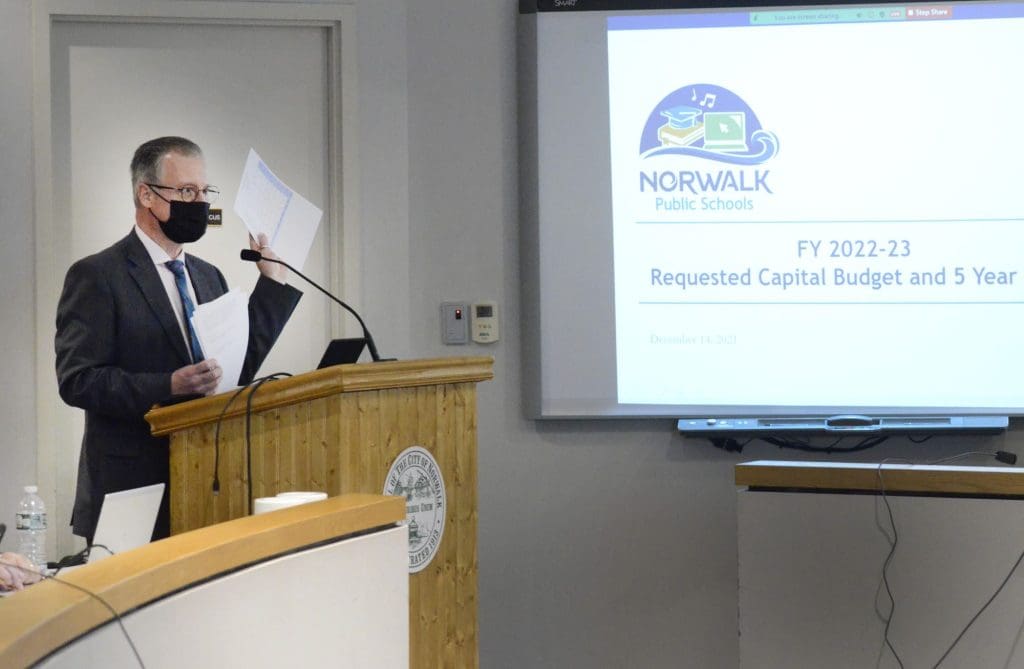 To that end, NPS is kicking off “a discussion” with the city by presenting a plan to spend $54 million on renovating West Rocks Middle School in three years and $52 million on Nathan Hale Middle School two years after that, said Hamilton, who is retiring. Major investments would follow every two years, in that same magnitude.

This segment of the 2022-23 NPS capital budget request is something both parties would agree might be done in the future, but it wouldn’t be a firm commitment on the City’s part. It’s long-range “out planning.”

Chief Financial Officer Henry Dachowitz has pushed back at Norwalk’s debt level. Last year, he said the City would be unlikely to maintain its AAA rating with a debt level of more than $400 million.

The latest estimates for school renovations come directly from Newman/DLR, hired by the Board of Education to do a facilities assessment, Hamilton said Tuesday. Newman/DLR presented “a really detailed spreadsheet that allows us to build in and cost escalation because as you’re probably aware, construction costs continue to escalate.”

So when NPS requests $54 million in 2024-25 to renovate West Rocks, “it’s not a number at all that was pulled out of the air,” Hamilton said. “It’s a number that is supported by, you know, really rather detailed cost estimates from architects and engineers.”

After the 2024-25 budget is approved in 2024 with the West Rocks expense in it, “there’d be a period of probably a year of design and then construction over several years,” as likely the work would need to be done in phases, Hamilton said.

NPS contemplates seeking $52 million in 2026 for Nathan Hale, again based on Newman/DLR numbers “priority recommendations as to which projects they felt were most pressing,” he said.

The consultants recommended updating the schools over 15 to 20 years, but “we’ve stretched it out over a 25-year period,” Hamilton said.

“Obviously, that’s a long time in the future,” Hamilton said. “A lot of things are going to change between now and then. But at least it sort of lays out in some organized fashion, one approach that could be taken to dealing with buildings that as I think we’re all aware, there’s been decades of neglect on.”

That’s even though “we’ve made tremendous progress as a city, and we’ve got more progress that’s in the works right now with Norwalk High School, to be completely rebuilt, with Cranbury school to be completely rebuilt, Jefferson School in construction now, and with a new South Norwalk school,” Hamilton said. “There’s certainly a lot to celebrate, but there are still a number of other buildings that need a lot of work …the middle schools were identified as particularly in need by the Newman DLR Group.”

The hoped-for South Norwalk neighborhood school is already funded through previous capital budgets as the plan to build it replaces the one for a new school behind the Nathaniel Ely preschool center and the Concord Street school renovation.

If the West Rocks expense is approved, “I think there’s a good chance at that point, we would be finishing the construction on Cranbury,” Hamilton said. “And the new South Norwalk school would be well into construction, or maybe close to complete construction. Norwalk High School would probably, I’m not sure what the plan is exactly how that project is going to be phased, but that project would also be well underway.”

He said, “We’ve put this together, as you know, as a place to have a discussion with the city and I think it at least provides some solid real numbers to talk about as to you know, how the city can maintain what is really one of its very most important pieces of infrastructure or elements of infrastructure, which is its school buildings.”