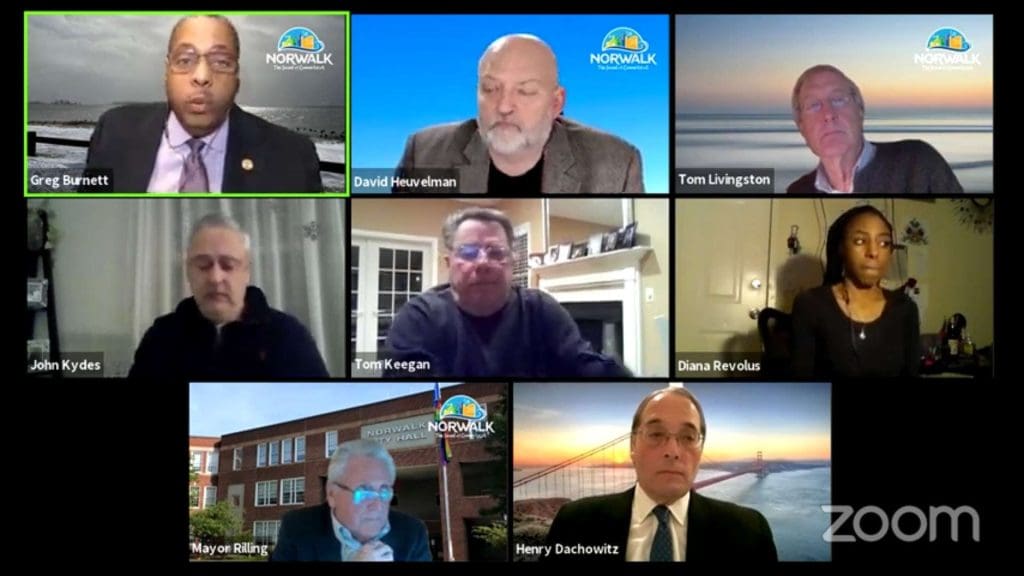 The Finance Committee voted 5-1 to advance the $384.6 million total appropriation limit to the full Common Council for a vote Tuesday. Mayor Harry Rilling and Committee Chairman Greg Burnett (D-At Large) stressed that this is a beginning step in the process, that the Board of Estimate and Taxation will spend much of March combing through department budget requests and the budget cap could be raised in April.

“This cap just simply sets a mark in the sand as we move forward,” Burnett said.

The virtual public hearing and vote were marked by a bit of drama: after activist Diane Lauricella offered her annual budget criticisms and eight parents spoke on behalf of the schools, including Board of Education member Barbara Meyer-Mitchell, no Council members offered to “move” the item for consideration.

It hung there, with Burnett waiting for a reply. Getting none, he started the discussion. David Heuvelman (D-District A) offered thoughts and then John Kydes (D-District C) said he’d move it to the full Council, “So everyone, not just the Finance Committee, can chime in and say their piece.”

Burnett, as Chairman, could move it forward without a vote to fulfill the Council’s legal requirement to set a cap on the fourth Tuesday in February.

Norwalk Chief Financial Officer Henry Dachowitz’ recommended budget book was published online just hours ahead of the public hearing. It offers little oddities such as calling itself the “approved” budget, ahead of any Council votes, and sections lifted from the 2020-21 budget book, offering dated information regarding the achievements made by Norwalk Public Schools.

Norwalk Director of Management and Budgets Angela Fogel recently suffered a medical emergency and has been unable to devote herself to the process, Dachowitz has said. Kydes and Nick Sacchinelli (D-At Large) noted Thursday that they were waiting for information.

Dachowitz’ recommended budget factors in a 6% increase in City-side spending a 2% increase in Board of Education spending. BoE members say they need a 4.6% budget increase to avoid painful budget cuts, given rising health insurance costs and contractual obligations. They also seek to mitigate learning losses caused by the pandemic.

“The students have lost a lot in terms of COVID, missing school,” said Teresa Peterson, mother to a kindergarten student. “And the more we don’t give them, the less they have. Right now we need to put money into the schools to help, just right now, get kids back on track, to get them up to speed from all the loss that they’ve had. And if the schools have to cut $5 million, you know, again where, where are they cutting it from?”

“We have made incredible progress and this Council has been a big part of that. Thank you for it,” Meyer-Mitchell said. “But we still have to maintain it and continue to build our reputation. It’s been very exciting this year to see other communities, pointing to us as leaders in this crisis. And that’s where Norwalk wants to be. We don’t want to just be the number one, urban school system in Connecticut. We want to be an educational leader for our state and our nation to show how diverse communities such as ours can succeed as to any obstacles.”

“Spending on the schools is not just, you know, throwing money at something. It’s an investment in the community,” Tyler Fairbairn said.

Heuvelman said he’d been moved by the comments.

“I don’t believe that anyone here wants to have substandard schools in any way. I don’t think that’s at all, open for debate,” he said. “The question becomes, is that the … funding for this comes from the taxpayers and we are in the middle of times that we’ve never been in before, a pandemic that’s caused us to live life in a very different way.”

Heuvelman, who cast the only no vote, attempted to start a conversation on raising the proposed limit so that NPS would get a 2.5 % or 3% increase, because “I don’t think 4.6% is doable, nor sustainable.”

No one took the bait.

Kydes pointed out that Council members and others “have spent the last five years supporting and improving and getting through some of the largest budget increases we’ve seen most likely in the history of Norwalk and from what I’ve also heard in the entire city…. I mean that’s no easy task.”

There was “just cause” for those increases as the schools had been underfunded for decades, he said.

State law mandates that the schools’ budget cannot be cut from the amount given the previous year and, “when I hear words like ‘not fully funded,’ and things along those lines, I think those words are the words that are picked up by the press and sent out there and discourage … people from moving to Norwalk and bringing their kids to the school system. It is a little hurtful to hear that knowing how much work we put into to funding the Board of Education.”

Sacchinelli said, “The Board of Ed has done a lot of great work over the past years, we are seeing a major increase in our school system. There’s always been a strange correlation with funding to performance, we have some very quality people, which I think will also add value.”

The “substantial funding” has ”shown fruit,” but “unfortunately we are during a time of great need of all the residents, not just the school systems themselves,” he said.

Thomas Keegan (R-District D) said NPS had made a “large miscalculation” regarding its health insurance costs, “to the tune of $2 million,” and it “simply bothers” him “that they found this discrepancy at the last minute.”

Norwalk Public Schools Chief Financial Officer Thomas Hamilton has said that he based the estimate on projections from a consultant. An update lowered the expected cost.

Keegan also said, “It appears that at the end of every year, the Norwalk Public Schools seem to find money that they can carry over to the next year. And my concern is that this budget may have that kind of an impact later in the year so, is it as cut to the bone as we expect it to be?”

Diana Révolus (D-District B) said she agreed with Heuvelman and spoke of “not only taking care of our children” but also “their families and the homes that they rest in as well.” She mentioned “understanding how this would affect not only the education but the living standards of Norwalk so we’re a healthy, vibrant community.”

The proposed budget cap represents a $15 million increase over 2020-21, and an average 3.6% increase in the mill rate.

Burnett closed the meeting by noting that the Board of Estimate and Taxation can ask the Council to raise its budget cap.

Rilling, at the hearing’s outset, said, “We start this process now but each single line item in our operating budget will be visited, and reviewed by the Board of Estimate and Taxation over the next coming weeks.”

I’m genuinely curious if Mr. Sacchinelli understands the education system and the school budgeting process. It is no secret that “ correlation with funding to performance” – when schools have funds to run the programs they need to and provide adequate support to students, then they perform better. Test scores go up and the education system improves. This isn’t rocket science. To quantify it as a “strange correlation” shows either a lack of understanding or a lack of intelligence.

Since special services can’t be cut, it will be interesting to see what is this time around? Band? Sports? Security guards? Something will have to go.