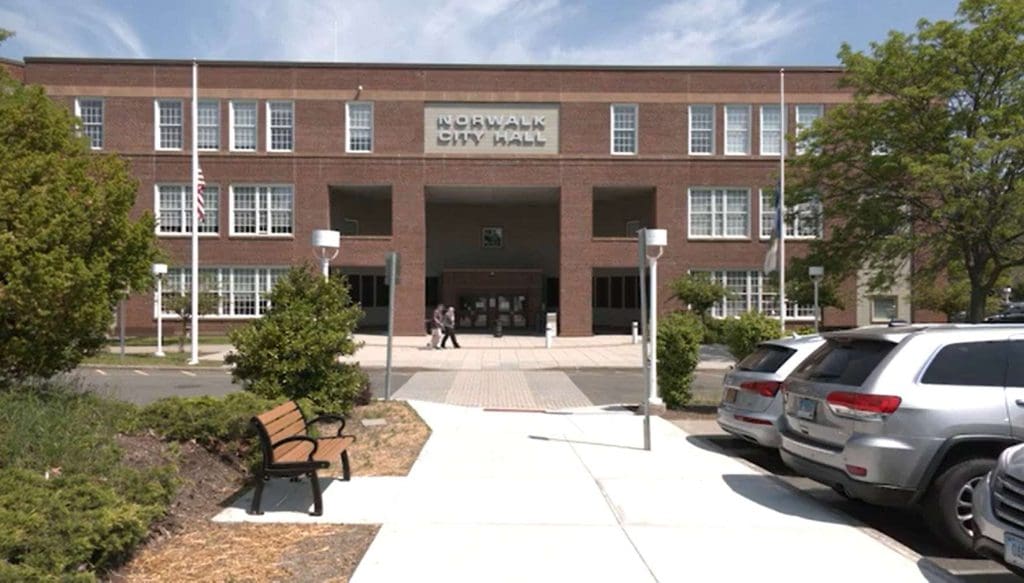 Norwalk City Hall, open to the public Thursday without an appointment needed for the first time in more than a year. Note the absence of people.

NORWALK, Conn. — Norwalk City Hall reopened Thursday, drawing a trickle of citizens through the door to conduct business without an appointment.

City Hall closed more than a year ago, then opened in September on a limited basis. Citizens could enter through appointment only. According to Mayor Harry Rilling, “upwards of 80 people a day” took advantage of that opportunity.

The reopening was timed to allow City Hall employees to be fully vaccinated.

“We held an employee vaccine clinic on April 7, and staff who attended will receive their second shot May 5, and then will be fully vaccinated on May 19,” Rilling said in a April 29 letter to staff. Employees were told they could request remote work, which would be considered on a case-by-case basis.

“We have worked hard over the course of the COVID-19 pandemic to make accommodations to schedules and adjustments and improvements to workspaces. We feel confident that now we can reopen City Hall without appointments and keep everyone safe,” Rilling said in the letter.

They’re required to wear masks. “The Mayor and Health Director will continue to monitor citywide vaccination and daily case rates and will adjust masking requirements when appropriate,” King said. The City isn’t requiring proof of vaccination as a term or condition of employment.

“I want to thank the city staff, they were remarkable. During this time, they were creative, they learned different ways to provide the services for the city, and for the residents. They were really great,” Rilling said Monday.

McQuaid has been coming to work – physically, not online – through the pandemic.

“Other than the door being open to the public allowed to come into our office, we’re still doing the same thing that we were doing,” McQuaid said. “We learned to do business better.”

Land recordings actually increased, and some of them were “big,” he said. “We are averaging about 1400 to 1500 a month right now, which is incredible. I think that’s a lot to do with refinancing and things that are going on.”

“I can’t say enough good things about my staff and what they’ve done over the past 15 months to serve the public,” McQuaid said. “Yes, there were a couple times that we just couldn’t do what people requested. Or, you know, we got the question every single day of ‘why we closed City Hall.’ We didn’t close City Hall, we were here and we able to take care of whatever we could with what we had.”

The drop box outside is an example of improved services, McQuaid said. Staff members did title searches and scanned documents, sending them to citizens by email. Marriage license applications are online.

“We did so many wedding licenses in the last 15 months. It was incredible,” he said. “But it was such a good feeling too. I mean, we had Justice of the Peace and other ministers come here and actually do weddings out in front, as I gave them their licenses, same day service type of thing. So it was really something to see that, you know, the increase of marriage licenses, of people that couldn’t have the big weddings anymore and got married here and maybe having a bigger celebration this year.”

“I think the toughest part in the last 15 months for all of us has been you know the death certificates,” McQuaid said. Most of his staff is from Norwalk and there were ties to the people who had passed, but, “like I said before they pulled together and we got it done.”

Running an election through COVID-19 was tough and they “don’t want another one like that,” he said.

“But we learned how to do that differently, too,” McQuaid said. “So we’re happy with where we are today, and how we’re going to be working with the public. And we have some new things that are going to be coming out between now in the end of summer, as far as you know, fraud alert, online records and some land records that aren’t online now. We’re hoping for a grant that we applied for during April, that we’re going to, you know, get that grant and if we do we’ll be open some more of our land records online so people will be able to view and go that way. So we feel good. I mean, we had to learned on the run. We had to change on the run and I think we ran a good race on it.”

Yet masks are still required! I can go to Walmart in Norwalk or Target without a mask and I’m safe, but I’m not safe at Norwalk City Hall. SMH.